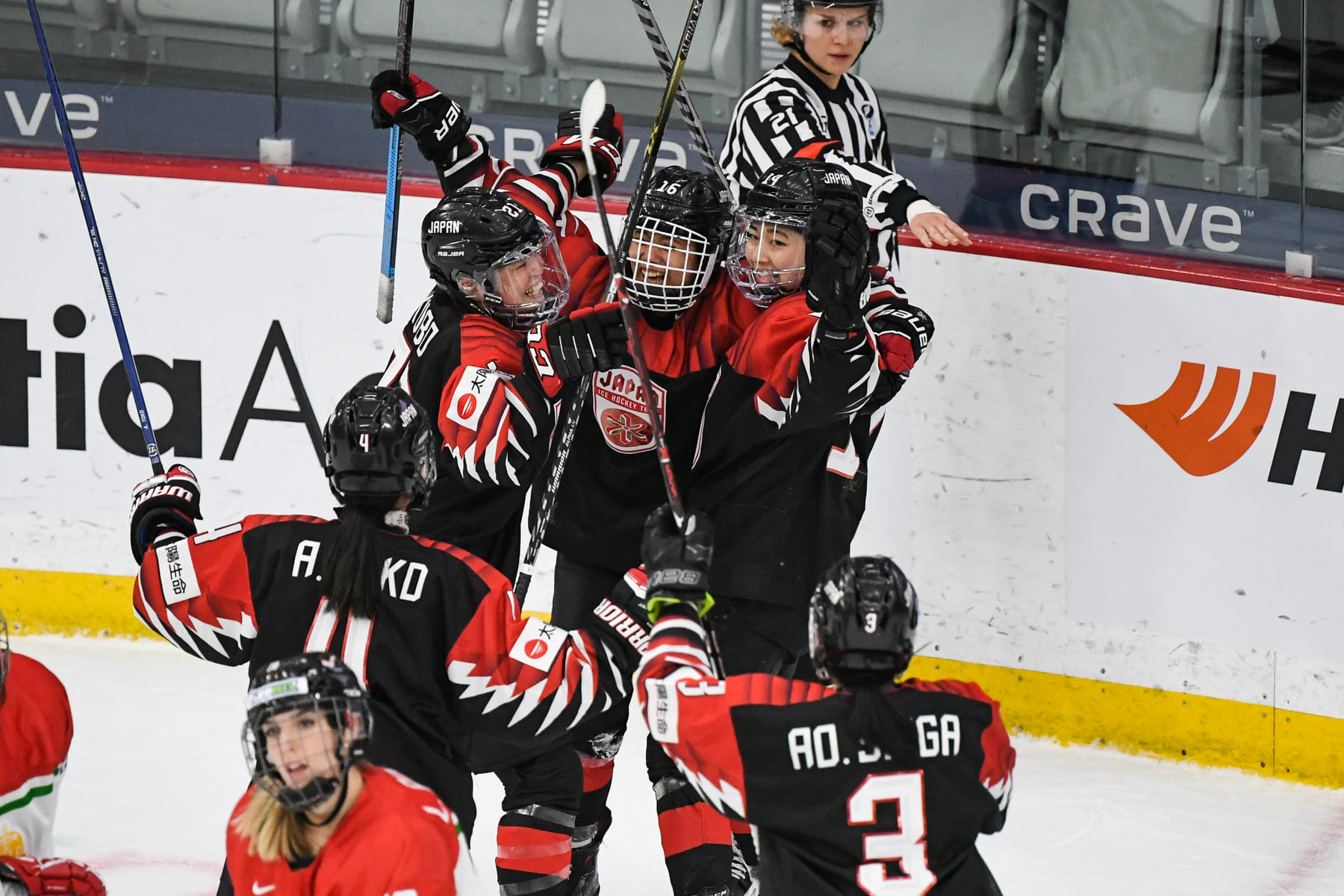 Smile Japan stormed into the quarterfinals at the Women’s Ice Hockey World Championship in Calgary, Alberta, on Thursday, August 26 by rallying to beat Germany 2-1 on goals from Hanae Kubo and Hikaru Yamashita, and finished with its best record ever (3-1) in preliminary round play at the tournament.

Japan came in second in Group B (with nine points) and defeated Denmark and Hungary on the way to clinching a berth in the final eight, as well as a game against the defending world and Olympic champion United States on Saturday, August 28 at 1:30 p.m. local time (4:30 a.m. JST on August 29).

The showdown with the U.S. will be a rematch of the quarterfinals at the 2019 world championships in Finland, where the Americans routed Japan on the way to winning the title.

Defender Akane Hosoyamada told JAPAN Forward she is confident her teammates will give the U.S. more of a battle this time around.

“We’re very excited and happy we’ve made it to the quarterfinals,” Hosoyamada wrote in an email on Friday. “We’ve played against the U.S. back in the 2019 WWC in Finland. We lost 4-0 and only had maybe a handful of chances or even shots on net. But we’re a different team since then, and hoping to get more chances and even capitalize on those opportunities.”

Hosoyamada acknowledged that Smile Japan will have its hands full with the U.S., which finished second in Group A, also at 3-1 with nine points. The Americans lone defeat came in a 5-1 shellacking by Canada.

“We are the underdogs, so we’re going to give everything we have,” Hosoyamada commented. “It will also be a great opportunity to see how much we’ve developed since the last time we faced them.”

Japan’s speed and teamwork will have to feature prominently if it is to advance to the semifinals for the first time. Coach Yuji Iizuka told IIHF.com that his team showed it can come from behind in its win against Germany.

“They scored in the first period, but I think after we tied the game in the second we got the momentum,” Iizuka stated. “That was the key for us. Once we got that first goal, we believed we could win.”

Forward Haruka Toko, who was named the player of the game in the win over Germany, admitted that it took Japan time to adjust to its bigger opponents.

“In the first period we struggled with the physical strength of the German players, but in the second period we were able to develop the match at our own pace,” Toko was quoted as saying on the Japan Ice Hockey Federation’s Facebook page.

Prior to the tournament, Hosoyamada, a native of Banff, Alberta, answered questions from JAPAN Forward about the upcoming event.

Hosoyamada, who played collegiately at Syracuse University, said it was great to be back in her home province after a long while.

“I think the last time I was in Alberta was 2 years ago,” Hosoyamada remarked. “I don’t think I’ve ever been away from here this long. It’s great to be back somewhere familiar.”

Quarantine Upon Arrival in Canada

Team Japan had to quarantine upon arrival in Calgary in line with local health protocols, but Hosoyamada noted that did not prevent the team from working hard in preparation for the worlds.

“We were only quarantined in the hotel for about five days, and the rest we were in a strict bubble,” Hosoyamada stated. “Every day we had three training sessions: morning stretch/body weight training, water-bag training and a bike workout. Having those training sessions really helped with getting through the days and kept us active.”

Going into the worlds, Hosoyamada said the vibe in the team was bright.

“It’s very positive! We have energy, excitement, and anticipation,” Hosoyamada commented. “We can’t wait to get the games started. Our goal is to get to the medal rounds. If we want to achieve a medal at the Olympics, we first must achieve it here at worlds. It’s a huge stepping stone.”

The tournament was canceled last year, then postponed twice this year before finally being held. Despite the disheartening delays, Hosoyamada claimed Smile Japan remained prepared.

“Of course there was some frustration, but mostly I think we understood that it was an unsafe environment to go forward with,” Hosoyamada remarked. “The most important thing was, whether the worlds were going to be postponed or not, we had to be ready to play, this helped us stay on track. There were definitely times where I lacked motivation, but my teammates supported and kept pushing me.”

With the Beijing Olympics just five months away, Hosoyamada said the team is thinking big after finishing sixth in Pyeongchang in 2018.

“The talk is definitely of getting a medal,” Hosoyamada stated. “We believe it’s reachable and going to try our best to achieve it!”