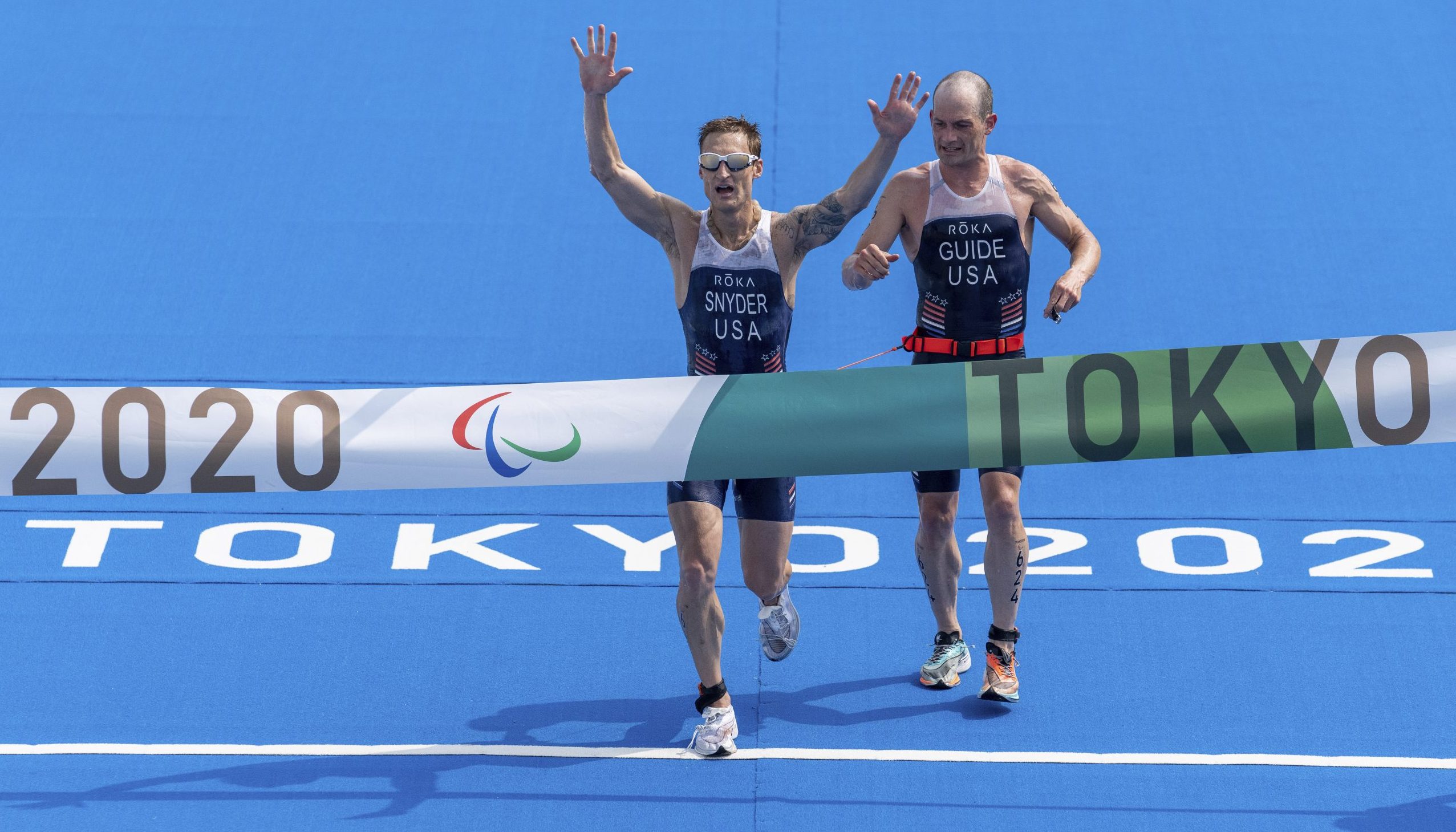 Brad Snyder of the United States and his guide Greg Billington cross the line as Snyder wins the men's triathlon PTV1 at Odaiba Marine Park on August 28. (Joe Toth for OIS/ via AP)

Afghanistan war veteran Brad Snyder fulfilled his desire to take on new challenges by winning the gold medal in his paratriathlon debut at the Tokyo Paralympics on Saturday, August 28.

Snyder, a retired U.S. Navy Explosive Ordnance Disposal officer, was blinded after stepping on an improvised explosive device in Afghanistan in September of 2011.

He added to that impressive haul on Saturday, leading the men’s PTVI (Paratriathlon Visual Impairment) race for its entirety. He completed the 750-meter swim more than a minute ahead of the next competitor before extending his lead in the 20-km bike and then again in the 5-km run to finish the course in 1 hour, 01 minutes, 16 seconds at Odaiba Marine Park.

Hector Catala Laparra of Spain was second, 0.55 seconds behind while Japan’s Satoru Yoneoka took the bronze medal with a time of 1:02:20.

Guided by Greg Billington, Snyder came into the race ranked No. 8 in the world only three years after taking up the sport. The native of Baltimore, Maryland, now has won a gold medal at each of the last three Paralympic Games.

“My life’s not about winning, it’s about taking on new challenges like I did with triathlon,” Snyder told teamusa.org.

Snyder, who served in both Iraq and Afghanistan, has now won six Paralympic gold medals.

It was a big day for the United States in the event as Allysa Seely defended her title in the women’s PTS2 race.

It was also an historic day for the host nation in the event as Yoneoka and Hideki Uda won Japan’s first-ever medals in the sport.

“When I finished the race, I had a hard time controlling my emotions because I was overwhelmed with various emotions,” Uda told Kyodo News. “I felt really happy running the final stretch.”

Uda was involved in a life-threatening accident in 2013 at his workplace that cost him his right arm.

He discovered triathlon in the process of recovery and made his debut in the sport in 2015.

As a result, Britain, the fifth-place finisher at the 2016 Rio Games, advanced to the final for the first time. Coach Paul Shaw’s squad will meet the United States in the 6 p.m. title match on Sunday, August 29. Team USA nabbed the silver in Rio.

Jim Roberts paced the victors with 20 tries and Aaron Phipps had 17 at Yoyogi National Stadium.

Great Britain extended its lead to 42-33 entering the fourth quarter.

After the match, Ikezaki reflected on the team’s journey to the Paralympics and the emotional aftermath of missing out on a spot in the title match.

“We knew the Japanese people had high expectations for us, and I really wanted to make them happy, but today, our best wasn’t good enough,” Ikezaki said, according to Kyodo News.

“People went to so much effort to hold the Paralympics during this difficult coronavirus situation. But we couldn’t meet expectations, and that’s the really disappointing thing for me.”

Up next: Japan faces Australia, the 2016 Paralympic champion, in the bronze-medal match at 2 p.m. on Sunday.

Japan Men Improve to 3-0 with Victory over Canada

Hiroaki Kozai scored a game-high 24 points and added six rebounds and five assists to lead Japan to a 62-56 victory over 21st century men’s wheelchair basketball powerhouse Canada in a men’s preliminary round Group A game at Ariake Arena.

Takuya Furusawa netted 14 points and Kei Akita chipped in with 12 for Japan, which improved to 3-0 in the Paralympic tournament. The team opened the tournament with a 63-56 victory over Colombia on Thursday, August 26 and beat South Korea 59-52 the next day.

The 33-year-old Kozai, whose legs were amputated above the knees at birth, attended the University of Illinois at Urbana-Champaign and earned a degree in sport management in 2013 before launching an overseas career in Germany (BG Baskets Hamburg and RSV Lahn-Dill for several years.

Japan did a stellar job taking care of the basketball, finishing with 19 assists and five turnovers. Renshi Chokai handed out a team-best five assists.

For Canada, five-time Paralympian Patrick Anderson had 22 points, including 8-for-8 from the free-throw line, and 12 rebounds. Teammate Nikola Goncin, who was born in Sarajevo and relocated with his family to Canada as a war refugee when he was 3 years old, finished with 20 points, 13 rebounds and six assists.

The 37-year-old Kunieda is chasing his potential third Paralympic title in the men’s singles, after snatching gold medals both in Beijing in 2008 and in London in 2012. Kunieda is currently the world’s No. 1-ranked men’s singles player.

The Chiba native has also gained medals in the men’s doubles in wheelchair tennis, capturing the gold medal in Athens in 2004 and the bronze in Rio de Janeiro four years later.

The competition is fierce to achieve the podium in the category. Major competitors include defending Paralympic champion Gordon Reid of Great Britain and strong athletes such as Argentina’s Gustavo Fernandez or France’s Stephane Houdet.

Kunieda is set to play also in the men’s doubles second round with  Takashi Sanada on August 29. They will meet French duo Frederic Cattaneo and Gaetan Menguy.

Japan ended the day with 13 medals (2-4-7), and swimmer Takayuki Suzuki led the host nation with three medals, including a bronze on Saturday in the men’s SM4 150-meter individual medley final, a race he completed in 2:40.53 at Tokyo Aquatics Center. Earlier this week, he won a gold medal in the men’s S4 100 freestyle and a bronze in the SB3 50 breaststroke.