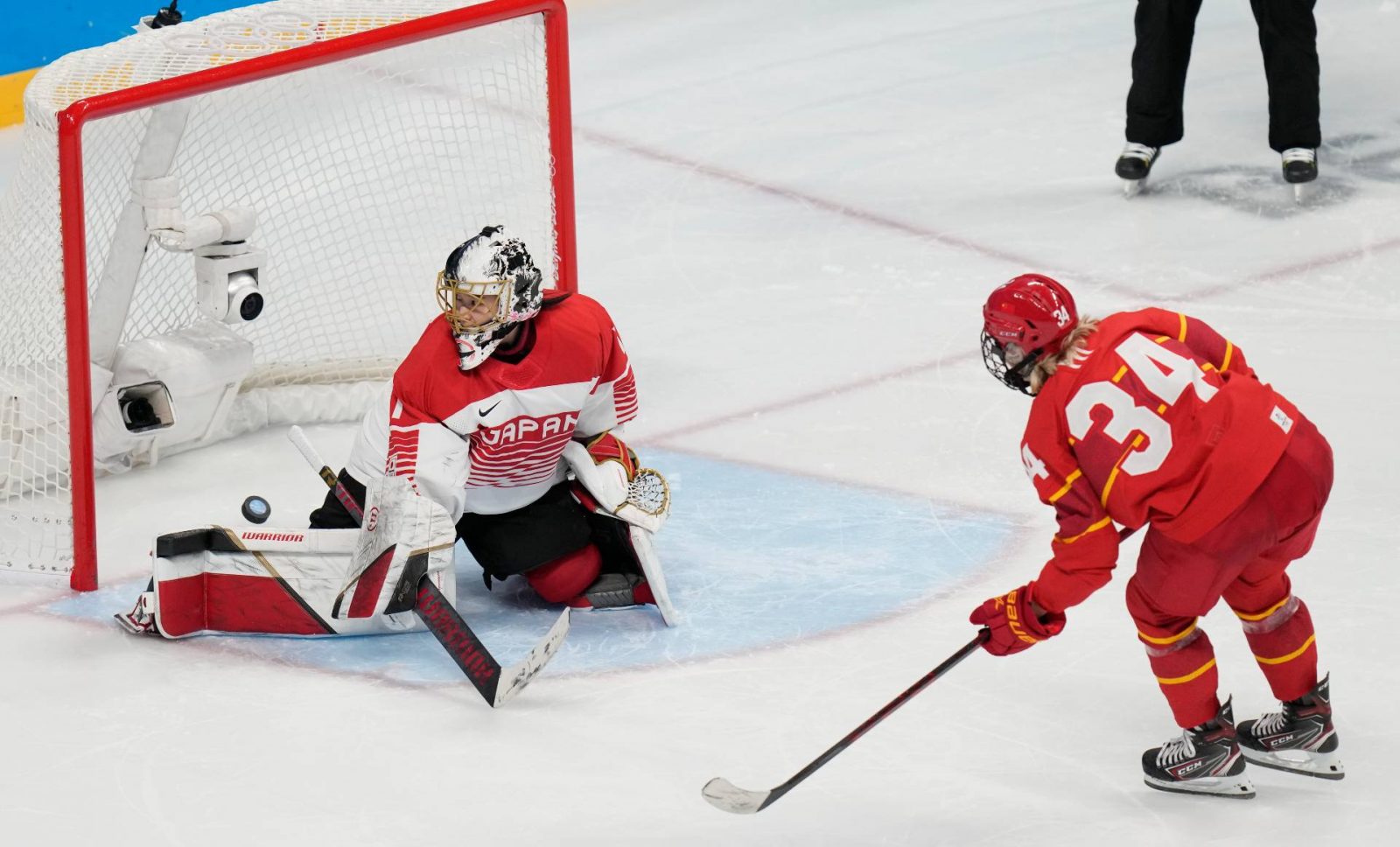 China's Le Mi scores against Japan goaltender Nana Fujimoto for the winning goal in a penalty shootout during a Group B preliminary round women's hockey game at the 2022 Winter Olympics on February 6 in Beijing. (Petr David Josek/AP)

Host China needed a shootout to beat Japan 2-1 in the women’s ice hockey tournament at the Beijing Games, but the single point earned was enough to send Smile Japan into the quarterfinals for the first time in four appearances at the Olympics.

After beating Sweden 3-1 on Thursday and Denmark 6-2 on Saturday, Japan only needed a point to guarantee a top-three finish in Group B and a berth in the last eight.

Canadian-born Le Mi, better known as Hannah Miller, scored the only goal in the shootout on Sunday, February 6 at Wukesong Sports Centre to give China the win.

Ayaka Toko had one last chance to extend the game in the shootout, but was denied by China goaltender Kimberly Newell, also born in Canada.

Japan had a 1-0 lead until an unlucky goal just over one minute into the third period.

Maddie Woo was in the right place at the right time, pouncing on the rebound to fire it into a wide open net. It was an unfortunate break for Fujimoto who, up until the goal, was rock solid in the Japan net.

Smile Japan opened the scoring in the first period.

China committed an illegal hit late in the first period and the hosts paid the price.

With Beika Li in the box serving a two-minute penalty, Japan scored with just under two minutes left, when Hosoyamada rifled a wrister from the face-off circle that hit the crossbar before entering the net.

Chiho Osawa did a superb job of screening Newell who had no chance on the goal.

Japan is on top of the Group B standings with seven points. Up next: a match against the Czech Republic on Tuesday.

“It will really be a battle, the toughest battle,” Iizuka said. “We expect our players to come out hard and clinch first place.”

For the first time, 10 teams are competing in the women’s tournament, up from the usual eight.

The teams are split into two groups of five. Group A is defending champion the United States, world champion Canada, Finland, Switzerland and the Russian Olympic Committee.

The Czech Republic is second in Group B with six points followed by China with five. China plays winless Sweden on Monday.

In a bid to narrow the gap with more established hockey nations, China has stocked both its men’s and women’s rosters with Canadian and US-born players, including several with no obvious Chinese heritage.

While the move is within the IOC and International Ice Hockey Federation’s rules it has drawn some criticism online and elsewhere.

Mi, who scored the shootout goal, has no place of birth listed on the official Beijing 2022 website.

She represented Canada as an under-18 player. After playing at St. Lawrence University in the United States, she joined the Chinese-owned KRS Vanke Rays in 2018, which has been based in Russia for the past two seasons.

Japan is aiming to improve on its previous best finish when it was sixth at the Pyeongchang Games in 2018.