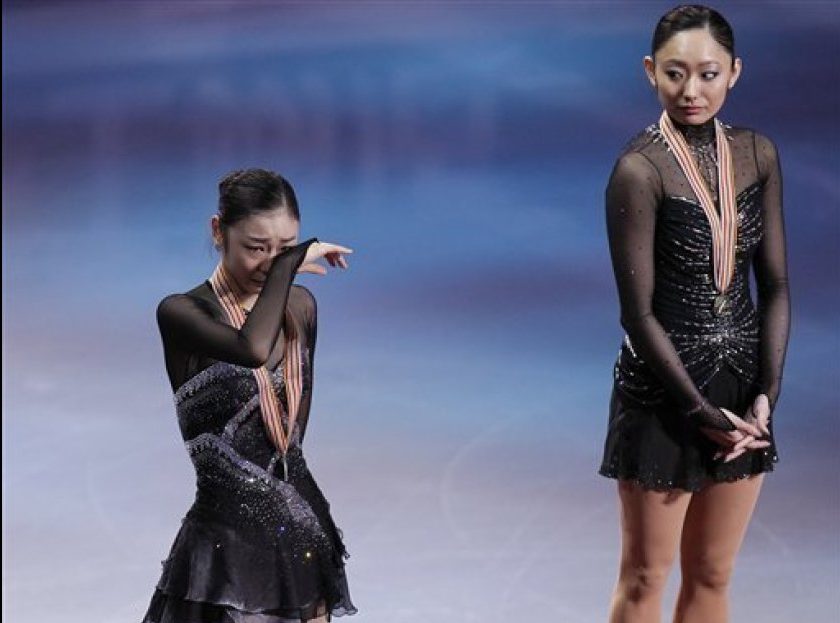 Upset and disheartened in the days after the Tohoku disaster in March 2011, Miki Ando stopped training at her rink in Nagoya. As the television replayed images of the earthquake and tsunami over and over, and the damage to the nuclear power plant in Fukushima, skating was far from her mind.

The world championships were set to be held in Tokyo just days after the crisis broke out, but it quickly became clear that Japan’s capital city would not be playing host to an international sporting event while it was being rocked by aftershocks and uncertainty up north.

Ando, who was enjoying the best season of her storied career, felt the situation was hopeless. She had been the world champion in 2007, the last time Japan had hosted the worlds, and was hoping to repeat the feat again.

Then 23 years old, Ando was at her peak as a senior skater, having won her third Japan Championship earlier that season, to add to the many other titles she had captured in her career. She won every event she had entered that season except for the Grand Prix Final, where she changed her short program at the last minute.

But all of this mattered little without the motivation to go forward. Then a letter from one of her fans in Tohoku changed everything and helped propel Ando to her second world title.

Ando recounted the story in an exclusive interview with the "Ice Time Podcast" in September 2019. (Listen to the full episode here).

“It was right before worlds, and we were training in Fukuoka (before the disaster), trying to adjust to the time change,” Ando recalled. “A lot of international skaters were there including Javier [Fernandez] and Florent [Amodio]. Florent said there was a bad earthquake. At first I couldn’t understand, because we often have earthquakes here and are used to it. ... It reminded me of 9/11 in America. Then I turned on the TV and saw the tsunami coming, and I wondered if it was real or like a movie. I said, ‘Oh, my God.’ ”

Ando tried to regroup after her initial shock at what she saw.

“Fukuoka and Tohoku are far apart, so I told myself to calm down,” Ando stated. “The French and Spanish federations immediately called their skaters home. I went back to Nagoya to train and wait until they decided if the worlds were going to happen or not.”

It was at this point when Ando realized it was going to be difficult to carry on practicing. She empathized with the victims and their families, having suffered a family tragedy when she was just 8 years old.

“I couldn’t really lead a normal life,” Ando commented. “It’s not the same, but I lost my Dad in a car accident. In the morning he was smiling and it was normal, but then, boom, he was gone. I could understand their [victims and families] feelings.

“Probably they were the same,” Ando continued. “Before the tsunami happened, they had a normal morning, and then, gone. I couldn’t stand that. So I stopped practicing and going to the rink.”

It was at this point that the missive from Tohoku arrived and changed everything.

“I got a letter from a person in the Tohoku area to my university,” Ando remembered. “They wrote and said, ‘It’s really hard. It’s really sad what happened to us, but that’s why we need you. We really wanted to see you shine on the ice and that makes us happy and strong.’

“At that moment, it was the first time that I felt like I did something. I am somebody for someone to make their feelings strong or smile with my skating. That letter changed my mind. I thought I have to skate for Japan.”

Skating fans feel a deep connection with skaters they admire and are often inspired by them in their daily struggles with life. In this instance, the roles were reversed, with the fan stirring the emotions and drive in Ando to get back on the ice.

“Then they announced it was going to happen in Russia,” Ando said. “So before the worlds I went to New Jersey and then to Russia to practice.”

Ando has fond memories of the 2010-11 season, one in which she was not originally planning to participate in.

“I felt really strong every day. I never had pressure that year,” Ando said. “I just enjoyed every day on and off the ice. I concentrated three hours a day on the ice [while training in New Jersey at the time], thinking about skating. The rest of the time I went to see something on Broadway or went shopping.”

Ando had discussed taking the 2010-11 campaign off, following the grind of an Olympic season, with coach Nikolai Morozov.

“Before the 2010 [Vancouver] Olympics, Nikolai and I were talking about when I could have an offseason,” Ando stated. “We were talking and we said that maybe the next season I could take off and reset my mind and everything. But then he came to me and said, ‘You have to keep going because worlds are going to be in Tokyo. You are from Japan and represent Japan, so you should skate there, because you won worlds in 2007 there.’ ”

Ando said trying to get back in competitive mode was a difficult task.

“In my mind I was already off [at that point], so it was really hard to change my feeling,” Ando commented. “I told Nikolai that I didn’t really think I could compete with that feeling. So then we decided to make some show numbers that I could use because I still had shows.

“We made three different kinds of show numbers,” Ando continued. “Nikolai put in a lot of steps for me in the programs. I then skated in Dreams on Ice before the season and I thought maybe [I could compete]. So I made a short program and that was good, but the free skate I wasn’t ready.”

“[Before the season] we were training in Latvia and had a small show for the people. They were really happy with it,” Ando recalled. “I thought I had shown them something they had not seen before. A week before the Japan Open, I made another program and skated well there.

“I think it was because I pushed myself to try something new. That was the season when we could have a bonus in the second half [of programs],” Ando noted. “If I was going to compete again, I wanted to change myself to be stronger than I was in the Olympic season. So I tried to put five jumps after the second half.”

Ando cited the strategy behind the move to push the jumps to later in her program.

“I knew with the five components that I couldn’t beat them,” Ando commented. “Even with a high score, still it would not be enough to compete against them. I decided that I was a good jumper, so I put the jumps in for the bonus, but it was hard. If the jumps were easy, there would be no score for them. So I put two combinations in the second half and a triple lutz.”

The worlds eventually took place that season in late April in Moscow. Ando trailed Kim by just half a point after the short program.

Ando remembered that she asked for some divine intervention before the free skate.

“In the free skate, I didn’t really think about medals,” Ando stated. “I just wanted to do something. I wanted to show to the people to be strong. I really love the sky because it has no wall. It is everywhere. On the morning of the free skate, I told the Russian sky, ‘Please give me the power.’ ”

As the first skater of the final group of six, Ando was at a disadvantage. But she persevered through her program and defeated Kim by just over one point. Ando’s winning total score was 195.79 points, while Kim tallied 194.50.

“I skated OK. I made some small mistakes,” Ando commented looking back. “I was happy how I skated for Japan, then the results came out.”

One of the enduring images of that competition came in the victory ceremony for the women’s singles while Ando stood on the top of the podium waiting to receive her gold medal. As she looked down to her right, she saw Kim weeping after finishing second. Ando had beaten the Olympic champion.

Ando had risen to the moment and helped to briefly inspire a nation confronting an incomprehensible disaster. The letter from the fan in Tohoku made an impact on her that Ando will never forget.