[3.11 Earthquake: Rebuilding] Tokyo’s Future? Mori Building’s City To Escape To, Not From 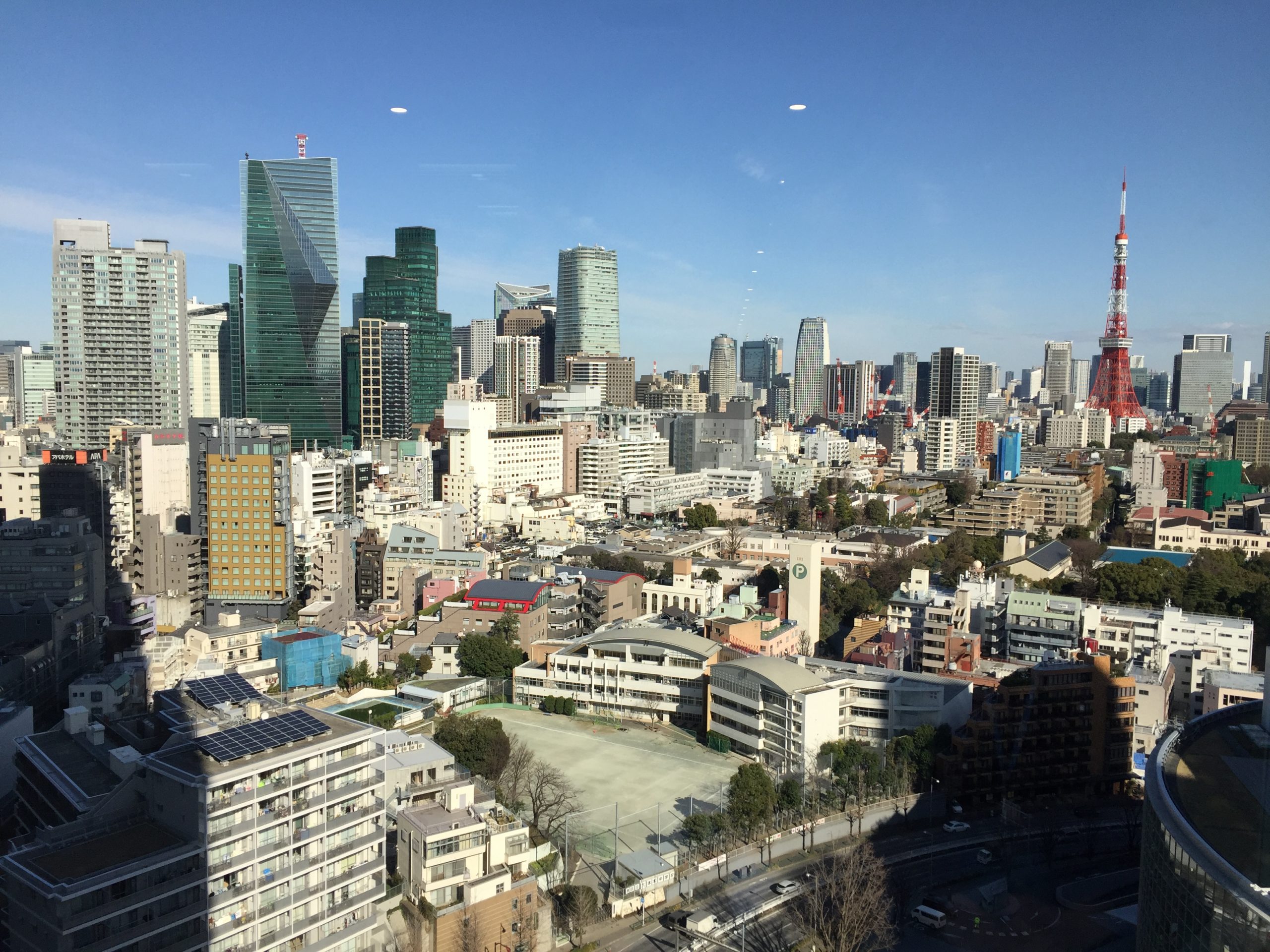 The towering Mori Building complex showing the neighborhood of mixed old and new, large and small buildings, and Tokyo Tower off to the right. Photo credit: Will Fee.

At the top of Keyakizaka Complex in Tokyo’s Roppongi Hills there is a small garden. Within that garden there is a pond, and by the pond a rice paddy.

Each year, family groups of local office workers and residents help to both sow and harvest the rice. The ongoing ritual offers a small slice of rural serenity amidst the life and bustle of the city.

The sense of tranquility found in the garden also contributes to a wider sense of calm found throughout Roppongi Hills.

This mood of quiet confidence and competence originates in the efforts of Mori Building Co., Ltd, affectionately known as “Mori Biru”, the internationally renowned real estate developer behind the Roppongi Hills project.

The disaster prevention team at Mori Building have taken it upon themselves to tackle Japan’s susceptibility to natural disaster. In doing so, they have transformed Roppongi Hills into  comprehensive disaster relief for the local area.

As the tenth anniversary of the Great East Japan Earthquake approaches, JAPAN Forward went on a tour of the Roppongi Hills facilities. There we learned about the impressive efforts being made to ensure both the safety and serenity of downtown Tokyo.


The Impact of Past Disasters

The images of tsunami and the generalized destruction to Japan’s northeast coastal region ensures that the Great East Japan Earthquake of March 11, 2011 remains vivid in the memories of many, both domestically and internationally.

The event prompted nationwide reform efforts to ensure such widespread destruction would not be possible again.

However, reform was already underway in many areas of the country, in large part due to the earlier devastating Great Hanshin Earthquake that struck Kobe (approximately 500 km west of Tokyo) on January 17, 1995.

Mori Building Disaster Emergency Office Senior Manager, Takashi Hosoda, reveals that Mori Building co-founder, Minoru Mori (1934-2012), went to Kobe to visit the site of the disaster in the weeks after the earthquake.

“The impact on Mr. Mori from witnessing the destructive power of a huge earthquake directly under the city was immense. This then had a great impact on the Roppongi Hills project, which was in the  planning stages at the time.”

Situated along the Pacific Rim “Ring of Fire”, Japan is prone to various types of natural disasters, and earthquakes in particular.

The Great Kanto Earthquake of 1923 destroyed almost all of the Tokyo metropolitan area, along with neighboring Yokohama.

At that time, most of the housing stock consisted of long rows of closely confined structures built of wood. As a result, great swathes of the downtown area either caught fire or collapsed.

Given that the city basin lies on the boundary of two fault lines – the Itoigawa-Shizuoka Tectonic Line (ISTL) and the Median Tectonic Line (MTL) – the fear persists among residents that Tokyo is now due another large earthquake directly beneath the city.

This fear is amplified by the knowledge that much of the historic downtown area around Tokyo’s city center is still composed largely of wooden structures. These buildings continue to line extremely tight alleyways and roads that prevent easy access by emergency service vehicles.

Based on mountains of data painstakingly assembled following the Great Hanshin Earthquake, Mori Building was able to build disaster relief provisions that respond to the problems identified into the very foundations of the Roppongi Hills project (completed 2003).

Roads around the complex were widened, allowing far easier access. Similarly, green and airy spaces were opened between buildings, reducing the risk of fire and providing restful areas for residents.

The structures themselves were fitted with what Mr Hosoda terms “hard” earthquake countermeasures.

“We adopted a uniquely high seismic standard that exceeds those stipulated by the current Building Standards Law. For example, at Roppongi Hills, we introduced a total of about 550 ‘oil dampers’ and ‘unbonded braces,’ which are advanced vibration damping devices.”

Such a high grade of seismic performance could, Mr Hosoda states, withstand a disaster of the magnitude of the Great Hanshin Earthquake (magnitude 6.9), should one hit within the direct vicinity of Tokyo.

This resistance was demonstrated during the Great East Japan Earthquake (magnitude 9).

As Mr Hosoda points out, not a single wine glass in Mori Tower’s 51st floor restaurant was smashed or even fell when the earthquake hit.

Beyond the structures themselves, the “hard” countermeasures introduced to the Roppongi Hills project include a bespoke energy supply unit.

This labyrinthine network of power generators located on the 6th floor below ground level ensures a consistently reliable supply of energy for the entire Roppongi Hills area.

Such is the reliability of this supply that, in the months following the disaster, the Roppongi Hills complex was able to direct its surplus energy to TEPCO (Tokyo Electric Power Company) to meet shortfalls in the wider Kanto region.

This system performs real time assessments of the degree of sway and deformation of each structure during an earthquake. First responders and members of staff are then immediately informed of the scale of damage via dedicated lines of communication.

The speed and reliability of this system allows for an extremely fast, targeted response.

Another key element of the disaster prevention system Mr Hosoda describes is the implementation of so-called “soft” countermeasures. These are aimed principally at streamlining cooperation between Mori Building staff members, residents, and companies housed in the Roppongi Hills complex.

In the aftermath of the Great East Japan Earthquake, Roppongi Hills (located 30m above sea-level and therefore considered an extremely low tsunami risk) accepted a request from the local Minato Ward government to accommodate some 200 people stranded in the city center.

At that time, the complex already carried enough drinking water and food for 1,500 office workers. Following the earthquake, Mori Building concluded a cooperative agreement with the local government that would see them prepare provisions enough for 10,000 people who are stranded in an emergency.

Housed over several company dormitories within a 2.5 km radius of Roppongi Hills, these specially trained employees remain ready to respond to any disaster at a moment’s notice, 365-days a year.

However, for Mr Hosoda, “The safety and security of any city is not solely down to the efforts of the organizers. Rather, safety is secured via the cooperation of tenants, residents, and visitors, all fostered with the spirit of both ‘self-help’ and ‘mutual aid’. We therefore strive to improve the disaster prevention capabilities of the entire community.”

To do so, Mori Building, in association with the Roppongi Hills Neighborhood Association, has conducted community-wide earthquake disaster training since 2004.

Not only residents, but also office workers and commercial tenants participate in yearly training exercises. These include drills such as the use of AED (Automated External Defibrillator) machines and fire extinguisher operation.

Given the large number of foreign residents, workers, and visitors to Roppongi Hills each day, disaster training also features multilingual support. Namely, in the provision of signage in both English and “Easy Japanese”.

At its core, this is the key idea behind Mori Building’s Roppongi Hills urban redevelopment project.

“Mori Building’s social mission,” Mr Hosoda states, “is to create a city that can double as a base for disaster prevention activities in the local area. We see this as the future of urban redevelopment.”

The fact of Japan’s susceptibility to natural disaster cannot change. However, what can change is the ability of local residents, workers, visitors, and tenants to overcome anything thrown at them by the natural environment.

This ability will prove essential if Tokyo is to continue to function as a magnet for international business in future.