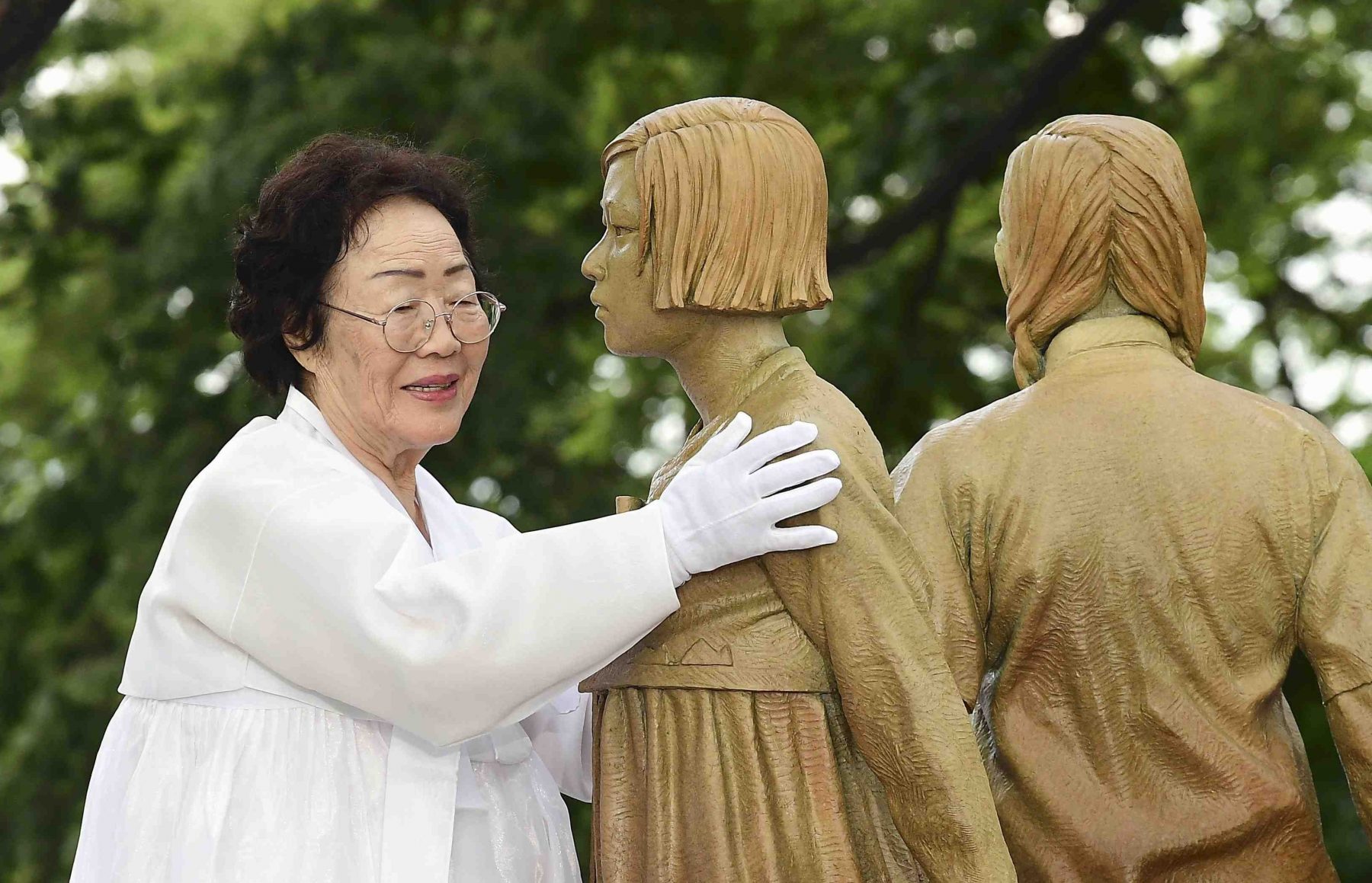 For about three weeks since January 28, South Korean media has been most fervently covering the news on Professor J. Mark Ramseyer’s paper on ‘comfort women’ of the Japanese military, titled “Contracting for Sex in the Pacific War,” published in International Review of Law and Economics. As the media poured out reports on Professor Ramseyer, claiming that he argued ‘comfort women are prostitutes,’ Korean society became thoroughly outraged.

For example, MBC TV did not hesitate to cite some Koreans’ angry responses to the news, which involved racist attacks on Professor Ramseyer, who was called a “white Japanese.” He was labeled a “pro-Japanese collaborator,” a “sellout for Mitsubishi, a corporate war criminal of Japan.” This type of reporting precisely reflects the saying ‘If you can’t refute the message, kill the messenger.’ A ludicrous situation has been produced yet again, where a whirlpool of anti-Japanese tribalism is swallowing up the whole issue.

I’m certain that Korean journalists did not even actually read Ramseyer’s paper, or if they did, they did not understand the point. The former is more likely. Initial reports on this issue by various media showed almost no difference whatsoever. This is because all media copy and paste reports by Yonhap News Agency. It isn’t too surprising, since this is the norm in South Korean journalism. Maybe I’m being foolish, expecting these people to actually read the paper themselves.

Academic articles have an abstract and three to five keywords at the beginning. In Professor Ramseyer’s article, the keywords are “Prostitution” and “Indentured servitude.” In the economic history of Japan, it is well-known that female employees who worked at inns and restaurants during the Edo period were indentured servants. They received a large sum of money in advance, an amount that they couldn’t dream of in ordinary circumstances, and in exchange, they worked for several years at their job.

In the economic history of the world, indentured laborers were workers who immigrated to the United States from Europe in the 18th and 19th centuries. Travel required them to pay for passage and food, which was too costly for poor European workers. Accordingly, employers in the United States paid for their travel expenses, and when the laborers arrived in the States, they worked for their employers for about seven years on average.

What Professor Ramseyer identified as contracts of indentured servitude was the contract between brothel owners and prostitutes before the Asian-Pacific War and that between ‘comfort station’ owners and ‘comfort women’ during the war. Before their work (sexual services) began, brothel owners provided large sums of money to prostitutes and comfort women in the name of ‘Maegarikin (upfront),’ and the women would pay them off over the years. The money that women earned from their customers, namely the sales, was split between the owner and the women in a certain ratio, and the women used a portion of this money to pay off the upfront they received in advance.

As in all good articles, Professor Ramseyer’s idea in his paper is simple. He first asks, ‘Why do contracts regarding prostitutes and comfort women take this particular form?’ Ordinary laborers work first and get paid later in the form of daily, weekly, or monthly wages. So why is it that prostitutes and comfort women entered into a different type of contract, which addressed things such as the contract period exceeding several years, wage advances, and the split ratio of sales?

The answer is also simple. A woman who gets a job offer in this particular industry faces a problem. She worries that working in prostitution will be fatal to her reputation. So in order to compensate for it, the brothel owner offers her very favorable conditions. But she cannot be sure if he will keep that promise. How do you solve this problem? The brothel owner pays her a large amount of money in advance. This is a ‘Maegarikin.’

The brothel owner also faces a problem. The particular nature of this industry makes it impossible to supervise whether his employees are working hard, since their labor takes place in a closed space. So the owner asks himself, ‘I pay them generously, but would they work hard as they are supposed to? Would clients leave satisfied, come back, and look for the same woman?’ He solves this problem by splitting the money (sales) earned from their services between himself and the women, in a certain ratio. This will incentivize the women to do their best at their job, while a regular salary will only discourage them from working hard.

Consequently, these circumstances give rise to the particular form of a contract mentioned above, i.e. indentured servitude contracts. This is the point of Professor Ramseyer’s article. To criticize him, one can simply criticize the ‘problem’ and the ‘answer’ raised in his paper. For example, one may argue that although Ramseyer contends that prostitutes or comfort women signed contracts, in reality comfort women of Joseon were forcibly taken by Japanese authorities. And if so, one may then present relevant evidence to support this argument. That is, show proof of “forced recruitment.” However, there is no evidence that forced recruitment by Japanese authorities has taken place. It’s been 30 years since the comfort women issue was raised, but not a shred of evidence was found to support this claim.

The only thing that anti-Japanese tribalists in South Korea present as “evidence” to support their “theory of forced recruitment” is the testimony of former comfort women ― testimony that they were taken by Japanese military and police. However, I do not trust this testimony. This is probably also the case for someone like Professor Ramseyer, who is, as a foreigner, in a better position to view the matter from an objective perspective.

Even the testimonies of Yong-soo Lee, who is working hard to attack Japan regarding the comfort women issue and who is treated like some kind of a national hero in South Korea, cannot pass as evidence. When she first revealed her history as a comfort woman in 1993, she said that she followed a man after being enticed by “a red dress and leather shoes.” But from around 2000, she changed her words and started claiming that she was forcibly taken by a Japanese soldier. Testimonies presented by the so-called comfort women activists and researchers are all like this. Not being able to criticize the “contract” between brothel owners and comfort women, they had no choice but criticize the ‘messenger,’ Professor Ramseyer, with the eager help of the media.

Also, to criticize Ramseyer’s argument (it’s not even an argument, it’s a historically objective fact) that brothel owners had comfort women pay off their advances over the years, one can simply provide evidence that this was not the case. The same goes for the argument that comfort women became free and returned to Chosen when they paid off all their debts or when the contracts ended, or the argument that they greatly profited from the split of sales with brothel owners. They can just present evidence that says otherwise. However, anti-Japanese tribalists could not do that. Because such evidence does not exist. They couldn’t even find errors or leaps of logic in the paper. All they could do is disparage the messenger.

Those who claim that “Professor Ramseyer argued comfort women are not sex slaves but prostitutes” fail to understand the point of the paper and misaim their criticism. His article doesn’t even mention the word ‘sex slave.’ If you look at the details of the contracts (Ramseyer is not even the one who first mentioned the contract. It is already a well-known fact among researchers of comfort women) between brothel owners and comfort women, you’ll see that though the paper was not written to prove that comfort women were prostitutes, this could potentially be used to support the argument that comfort women were not sex slaves. This is what anti-Japanese tribalists of South Korea wanted to criticize. But they couldn’t find historical, objective facts and data to support this and couldn’t even clarify such a logical problem.

There is another reason why they are making a fuss about Professor Ramseyer. Due to the recent scandal concerning Mee-hyang Yoon’s malfeasance, the comfort women “movement” was on the verge of losing its presence among the people of Korea. Anti-Japanese tribalists of South Korea did not know how to restore their influence. In addition, Young-hoon Lee, former professor at Seoul National University, presented new, convincing explanations and data about comfort women in his 2019 book Anti-Japanese Tribalism, which caused a stir all over Korean society. According to Lee, comfort women shouldn’t be regarded as “sex slaves.” I understand comfort women as “sex workers.” Those on the other side did not know how to refute this book, either.

They were on the lookout for a pretext to fight back. When Sankei Newspaper introduced Ramseyer’s article, they desperately took this chance. They started full-on ad hominem attacks and strived to ferment anti-Japanese sentiments, to the extent that even Koreans who did not know much about what was going on believed that this issue became controversial even in the U.S. and Japan. However, Japanese media has been quiet about it. In the U.S., there are only empty echoes of some scholars’ cries.

Perhaps anti-Japanese tribalists might consider this commotion as a great victory. But internationally, this may mark their first failure in their attempts to attack Japan.

Articles related to this debate:

Lee Wooyoun is an author and scholar with a Ph.D in economics, specializing in Korean economic history. His is currently a Researcher at the Naksungdae Institute of Economic Research.