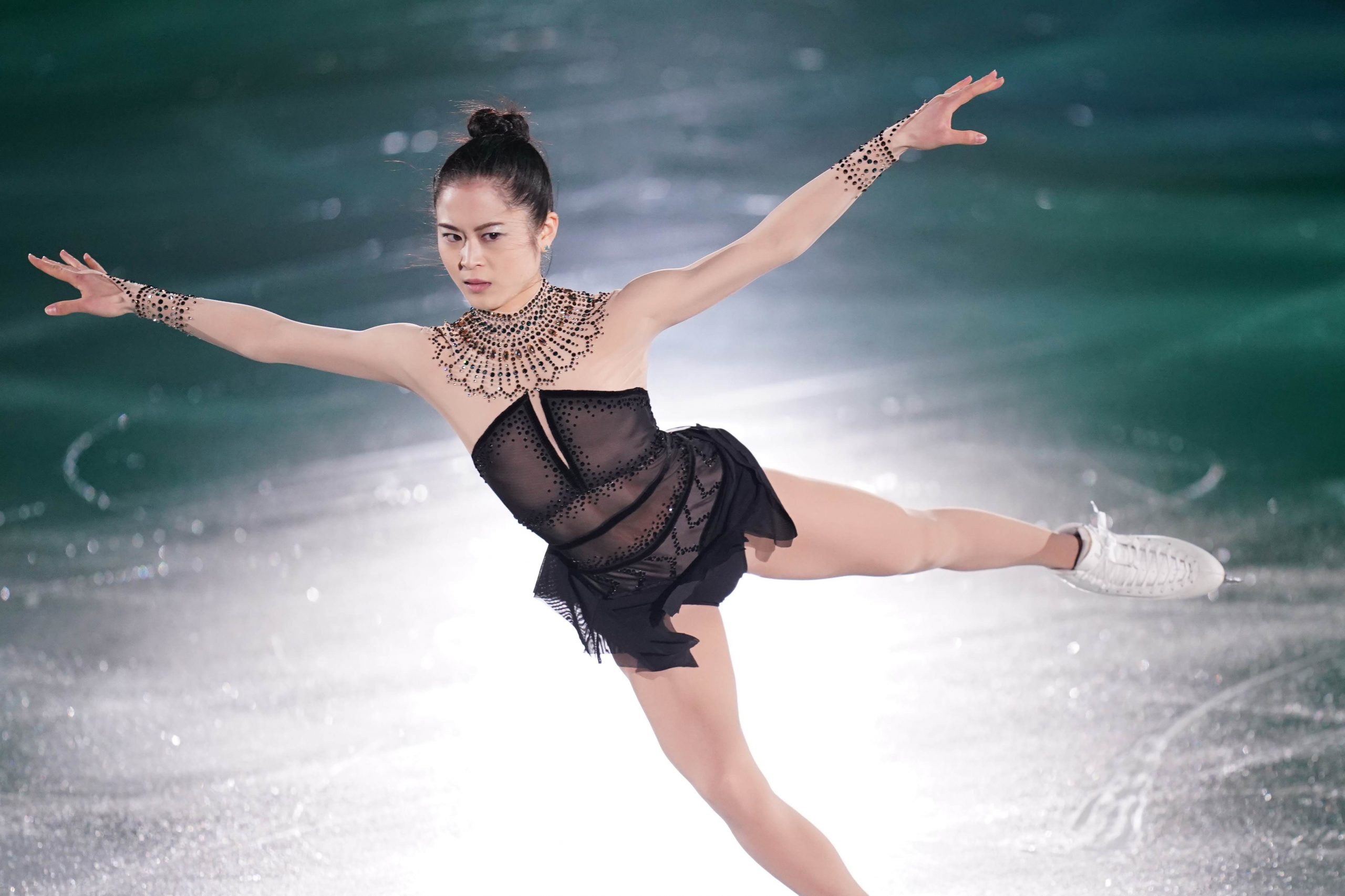 More than three years after she finished fourth at the 2018 Olympics, four-time Japan champion Satoko Miyahara still recalls her experience there fondly.

Speaking during “The Inside Edge: Skating Champions from Japan and the U.S.” online program hosted by the Japan Society of New York on Wednesday, June 30, Miyahara answered a question from Ice Time asking about her memories from the Pyeongchang Games.

“My very first Pyeongchang Olympics was like a wonderland for me,” a beaming Miyahara stated. “It was so much fun and an exciting moment. Not just the performance, but living in the athlete village and spending time with other athletes or other skaters. It was such a great opportunity for me.”

Miyahara, who finished just off a podium in South Korea that included Russia’s Alina Zagitova and Evgenia Medvedeva, and Canada’s Kaetlyn Osmond, looked back on the Olympics as a magical moment in her life.

“The competition was so special and so fun for me,” Miyahara reflected. “During skating it was like skating inside a dream.”

The 23-year-old Miyahara discussed her thoughts about the upcoming Olympic season, one in which she will face a challenge from her younger rivals to make the Japan team.

“My big goal is to participate at the Beijing Olympics, but for that I have many things to do and many tasks that I have to accomplish,” Miyahara commented. “I have that big goal, but not really looking for that, but just trying to concentrate each day, each practice and do what I have to do.”

Miyahara, a Kyoto native, addressed her programs and costumes for the coming campaign.

Miyahara, who is known by her many fans as “Tiny Queen,” was asked about the nickname by Kerrigan.

“It is a lot of pleasure for me to have this nickname,” a smiling Miyahara noted. “But also I felt a little bit of pressure, like I have to skate to match the nickname. So I had a little bit of struggle in my own mentality, but now I think the best way to skate is how I like to skate. That is the most important thing.”

Miyahara mentioned that she draws energy from her legion of supporters.

“If I can skate like I want to, it will let people feel more comfortable,” Miyahara stated. “All of the cheering and a lot of fans are making me so happy and giving me a lot of power.”

Two-time Olympic champion Yuzuru Hanyu will begin his Grand Prix season at the NHK Trophy (November 12-14) in Tokyo and then compete at the Cup of Russia (November 26-28) in Moscow, the International Skating Union revealed in the assignments announced on Tuesday, June 29.

Hanyu’s road to become only the second man, after Sweden’s Gillis Grafstrom, to win three straight Olympic gold medals would then take him to Osaka for the Grand Prix Final (December 9-12), where he would likely meet two-time world champion Nathan Chen.

The American will likely be Hanyu’s primary obstacle to topping the Olympic podium in Beijing next February. Chen is undefeated since finishing fifth behind Hanyu at the Pyeongchang Games in 2018.

This season the NHK Trophy will be the fourth of the six annual GP events, moving up from its traditional spot as the final GP each season. The NHK Trophy returns to Tokyo for the first time since 2013, when Daisuke Takahashi and Mao Asada captured the singles titles.

Pyeongchang Olympic silver medalist Shoma Uno has drawn Skate America (October 22-24) in Las Vegas and the NHK Trophy this season. The latter is noteworthy, as it will mark the first time that Hanyu and Uno have competed in the same regular GP. In order to give them the chance to earn maximum points to qualify for the GP Final each season, Hanyu and Uno have been kept from competing against each other by the Japan Skating Federation.

Hanyu will compete against compatriots Keiji Tanaka and Kazuki Tomono in Sochi, where the field will include Russia’s Mikhail Kolyada, and Canada’s Roman Sadovsky.

Uno will battle Chen and Zhou in Nevada, where Shun Sato and France’s Kevin Aymoz will also be in the lineup.

Chen’s second GP will be at Skate Canada (October 29-31) in Vancouver, where Tanaka, Sota Yamamoto, Hiwatashi and Jason Brown will also take part.

World silver medalist Yuma Kagiyama, who won the domestic skaters only NHK Trophy last season in Osaka, will skate in the Cup of China (November 5-7) in Chongqing and the Internationaux de France (November 19-21) in Grenoble.

Kagiyama, who was third at the Japan Championships last season, will be joined in China by Tomono, where they will compete against Jin Boyang, Cha and Kolyada.

Sato will make the journey to France, where the roster will also feature Aymoz, Brown and Russia’s Dmitri Aliev.

Kihira’s second GP will be the NHK Trophy, where the loaded lineup will include Kaori Sakamoto, world bronze medalist Alexandra Trusova, Liu and South Korea’s You Young and Lim Eun-soo.

Sakamoto will start her GP season at Skate America, along with Satoko Miyahara and Yuhana Yokoi. U.S. champion Bradie Tennell, Trusova and You will also take the ice in the Silver State.

Miyahara will next pull on the boots at the Cup of China along with Mai Mihara. Russia’s Anna Shcherbakova and Tennell will also vie for the crown in Chongqing.

Higuchi’s second GP will be in France, against a tough roster that includes Shcherbakova and Kostornaia, Tennell, Chen and American Mariah Bell.

Rino Matsuike, last season’s Japan junior champion, will compete at the Cup of Russia against a formidable field that will include Tuktamysheva, Valieva, Bell, and Kazakhstan’s Elizaveta Tursynbaeva, the 2019 world silver medalist, who missed last season due to injury.

Japan pair Riku Miura and Ryuichi Kihara have been assigned to Skate America and the NHK Trophy.

Ice dancers Misato Komatsubara and Tim Koleto are set to compete at Skate America, while the team of Kana Muramoto and Takahashi, the former singles skating star, are confirmed for the NHK Trophy.