[Bookmark] INTERVIEW | ‘Be Yourself’: A Chat With Emerging Star Yuri Tsunematsu 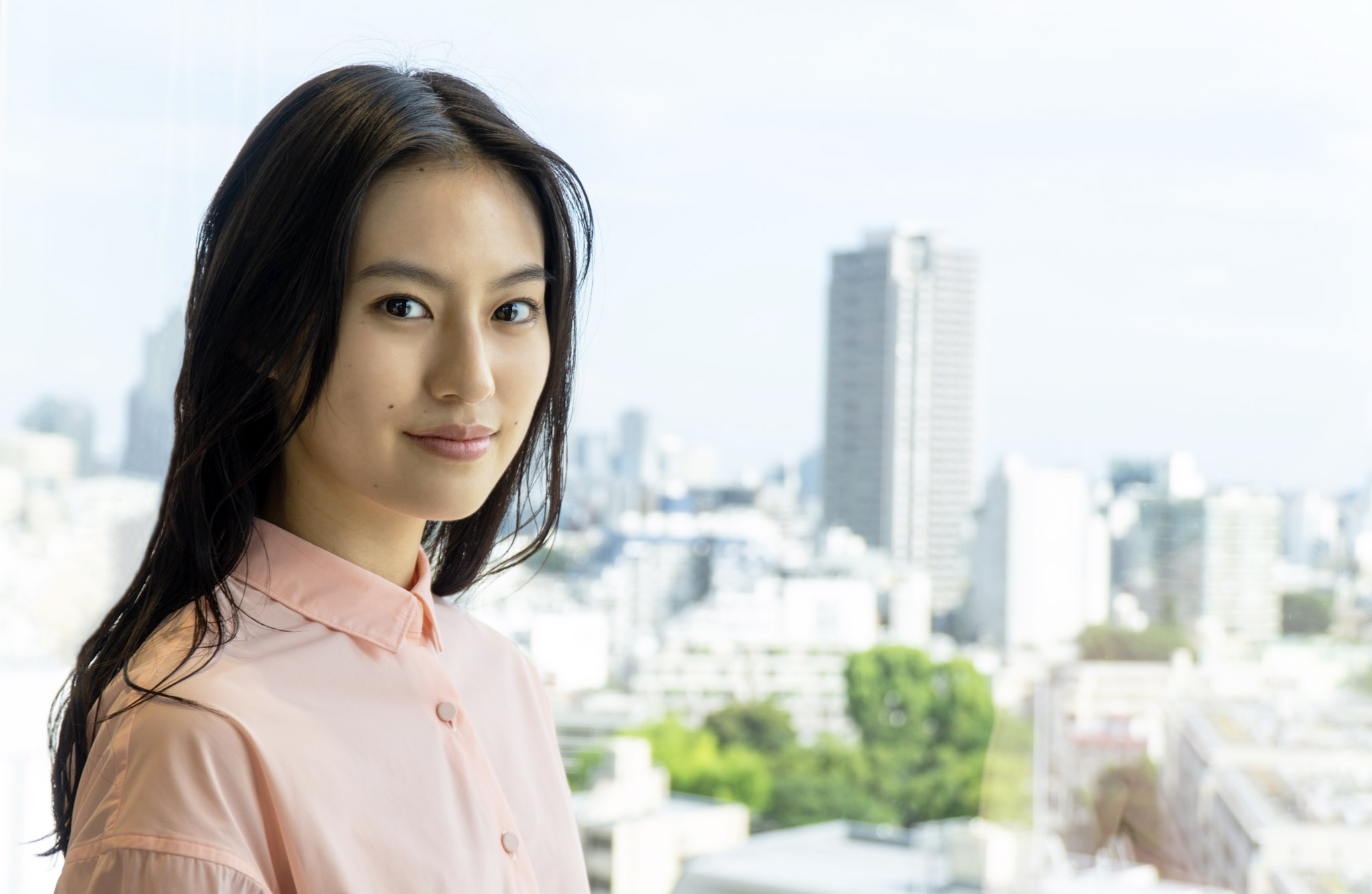 Yuri Tsunematsu is 22, and if you meet her, as I did in early June 2021, she strikes you as a very poised person. Perhaps it’s no accident that she is one of the quickly emerging young actors coming out of Japan.

Wearing a delicate pink oversized dress-shirt, and trendy tie-up boots, she cheerfully and frankly answered my questions on her most recent work, The Naked Director (2021), which begins streaming on Netflix on June 24. She plays one of the leading roles, the heroine Mariko Nogiki.

Tsunematsu is far from a beginner in the world of acting. With a career spanning over 15 years, she first debuted in 2005 as a child actor in Ruri No Shima (Ruri Island), a TV series broadcast on Nippon Television. Since then, she has played roles in several films and many TV series on Japan’s broadcast networks, such as NHK, TBS.

Her most recent roles include a part in the popular morning TV series currently being broadcast on NHK called Okaeri Mone (2021) (“welcome back Mone”). In this work, Tsunematsu plays the part of Asumi Nomura, a childhood friend of the main character.

The timing of the series is significant, as the story centers around Mone, a young woman who is from Miyagi prefecture in Northeast Japan, a region that was devastated in the Great East Japan Earthquake in March 2011. The series looks at children growing up with emotional baggage in the aftermath of the earthquake and tsunami, and how Mone decides she wants to work in weather forecasting, so as to help citizens of her hometown in Miyagi.

Among other achievements, the young actress also scored a supporting role in Wife of a Spy (2020), as Komako, the housekeeper of the two main characters in the story. The film won the Silver Lion at the Venice International Film Festival in 2020.

RELATED: A Conversation with Director Kiyoshi Kurosawa on ‘Wife of a Spy’

We sat down for an interview with Yuri Tsunematsu to find out more about the importance of playing a part in Okaeri Mone, in a year which also happens to be the 10th anniversary since the triple disaster in 2011.

The conversation then spanned the range of Tsunematsu’s work, hobbies, how she coped during COVID-19 (spoiler alert: there was a lot of Animal Crossing!) and her advice to young actors just like her.

Let’s first talk about Okaeri Mone. What do you think is the appeal of this series?

I think that Okaeri Mone is a work that really manages to link the hearts of people.

The main character of the story, Mone, and others including the character that I play, Asumi Nomura, are all from Miyagi and experienced the March 2011 Great East Japan Earthquake.

What emerges is that there are those who clearly suffered a loss in the disaster, and those who didn’t. But even among those who didn’t suffer a significant loss directly, everyone experienced the sadness of losing parts of their everyday life.

I believe the series shows tactfully the toughness and resilience of Japanese people. It portrays that no matter what obstacles and hurdles, people can recover and move on.

In the latter part of the series, it talks more about what weather forecasting involves as a profession. What did you think of this portion of the series?

Of course I look at the weather every morning. But this comes out of  people looking at the clouds, the level of the waves, the wind, and then making predictions about what the weather will be like the following day.

I learned a lot by participating in the series, and it made me very grateful about something which is part of everyday life.

How did you feel about appearing in this series, just as the 10 year anniversary from the disaster is observed?

At the time [2011], I was in sixth grade. It was graduation season, at the end of the school calendar. The disaster happened, but as I was still a child, there were many things that I didn’t understand.

I came home, and I saw the news. There were warnings, but it’s not something I fully absorbed. My parents would look at the news, and act accordingly. So, for example, I remember they would stick plastic sheets on the window.

When I grew up, I researched the things that I didn’t understand as a child. Therefore, I hope that by appearing in this TV series it could be an opportunity for children who are younger than me to find out about this history.

For those who are slightly older than me and remember the time vividly, I hope that it can be an opportunity for them to feel that they are not alone, they were not the only ones to go through such an experience. I hope they can remember that everyone in Japan has the realization that they lost something at the time.

Do you have a message for overseas fans who perhaps will get a chance to see the series?

I think it’s a very cheerful series, which shows a lot of aspects which are typical of Japanese culture, such as cultural festivals, Japanese incense, and manju sweets [typical sweets made out of red bean paste]. I hope it can be an opportunity for people to enjoy that.

Humans versus nature is a theme which is gathering a lot of attention lately. Do you think that it’s something reflected in the series?

I think that the theme of humans living in harmony with nature is very important in this TV series, and perhaps this series can become an excuse to think about that.

After all, we exist thanks to our environment, thanks to nature and earth. If we don’t keep this in mind, we can’t survive, and I think watching this drama could be an opportunity for people to appreciate this aspect.

On the other hand, the series also looks at science, and how science can’t change nature, but gives us clues on what behavior is best to help us face it. I think there is tremendous value, even if it is just learning a bit more about this kind of occupation.

Among your past experiences, working with Kiyoshi Kurosawa in Wife of a Spy (2020), particularly stands out. How was it working with the director and the actors?

This was the second time I had worked with Director Kiyoshi Kurosawa. The first time was in Before We Vanish (2017). So of course, I was very happy that I was asked again to play a part in the film.

For me, it was an opportunity to discover that there were Japanese at the time who were living a more Westernized life, wearing western-style fashion and clothes.

The film is based on Kobe during the Second World War, and the main role, played by Issey Takahashi, is that of a Japanese in an overseas trading business who travels abroad.

More generally, I think the film is quite provocative. It challenges ideas head on.

Visually, the film is amazing, including the performances of Issey Takahashi and Yu Aoi. I was happy even just to have a small part in it.

As someone who has been acting since you were young, do you have a message for younger actors?

Performance comes from you, and you alone. I think one can do something meaningful by deepening the understanding and expression of things you like. I don’t think you can try to become someone else even if you tried, so I would say that the most important thing.

What are some of your recent hobbies, I hear that you have picked up skateboarding?

I bought [a skateboard] together with a friend, but I am not very good at it! Besides, now it’s getting hot, so I haven’t really been doing it.

However, I really like games, in particular Animal Crossing: New Horizons. Also, The Legend of Zelda, for the past month I have been playing these two games.

I play Animal Crossing every day, I even have a separate category in my Instagram stories dedicated to it, so if you have a chance please have a look at my island!

How was your life affected by COVID-19?

At the beginning, filming stopped completely, there was no work for what felt like a really long time. At the same time, not going out almost at all was quite tough. I think perhaps I was saved by Animal Crossing.

Recently, things are getting back to normal, and when we rehearse we wear a mask, but when we act we can take it off. I am very thankful that work has started again.

What is your dream?

Ever since I was a child, I have always liked international TV series. I used to watch Bones, and Criminal Minds. If I managed to do something like that, I would be really happy, and so would my family, because they also watch a lot foreign entertainment.

In addition, now Japanese series are becoming very popular on Netflix. If I could participate in one of those, I would also be very happy.