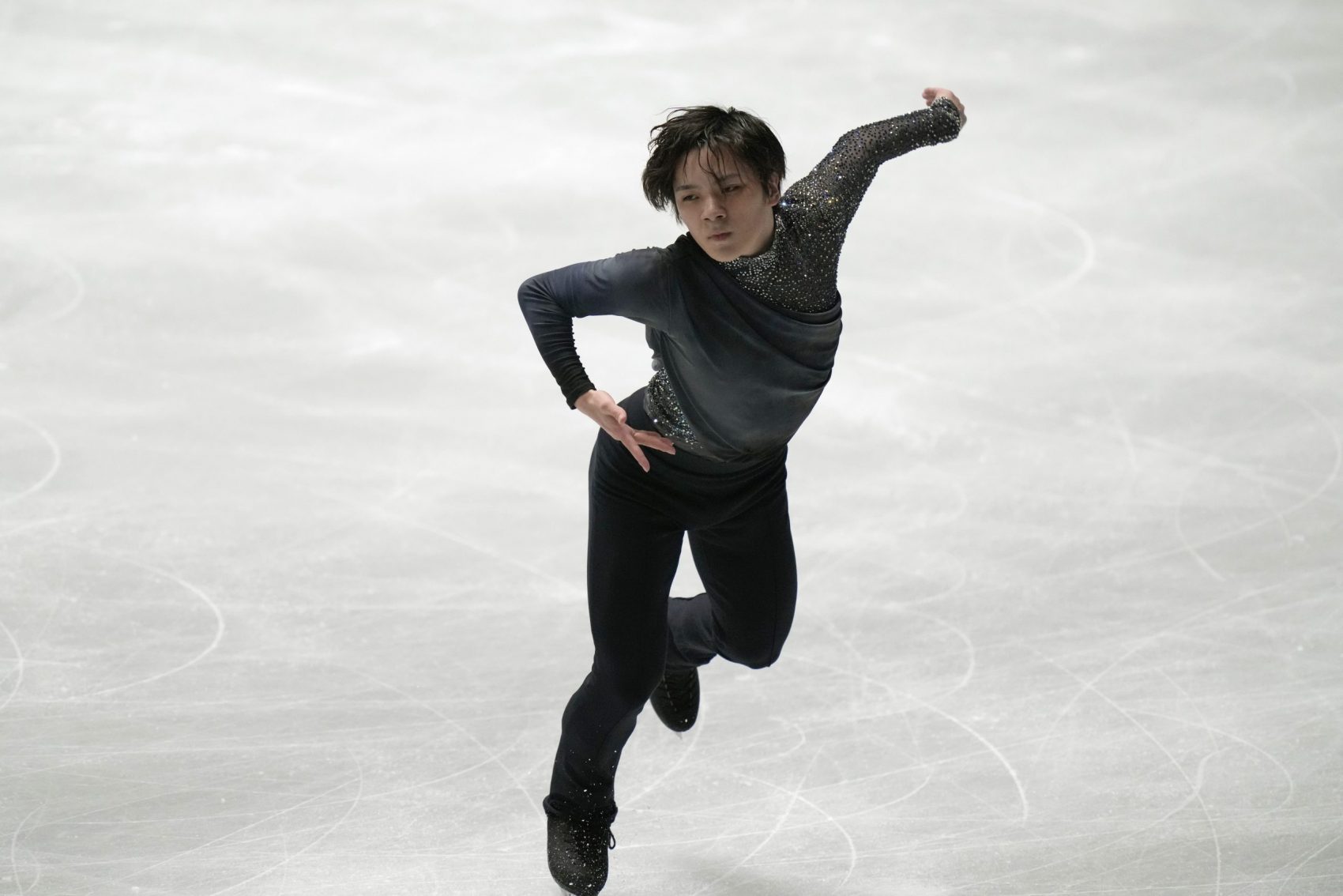 Shoma Uno performs during the men's short program at the NHK Trophy on November 12 in Tokyo. (Shuji Kajiyama/AP)

The NHK Trophy established that Shoma Uno is still a formidable force in the skating world, as he notched his first significant victory in an international competition in three years by a decisive margin on Saturday night, November 13.

Often overshadowed by superstar Yuzuru Hanyu, and recently by the up-and-coming Yuma Kagiyama, the Pyeongchang Olympic silver medalist illustrated that he is still one of the world’s elite skating talents.

The competition in Tokyo also showed us that American Vincent Zhou will be a legitimate medal contender at the Beijing Olympics. Even though he struggled in his free skate, Zhou has the potential on a given day to win an event.

Both Uno and Zhou locked up spots in next month’s Grand Prix Final in Osaka with their placements at the NHK Trophy.

The race for medals in China is comprised of five men at this point as Ice Time sees it ー Hanyu (presuming he is healthy enough to compete), Uno, Kagiyama, and Americans Nathan Chen and Zhou.

Coming off his victory at Skate America last month, Zhou appeared to be the favorite entering the NHK Trophy, but the 21-year-old was unable to execute his ambitious free skate to “Crouching Tiger, Hidden Dragon” and lost to Uno by a wide margin of nearly 30 points.

Uno led by just three points after the short program at Yoyogi National Gymnasium, but rose to the occasion in his free skate to “Bolero,” landing four quads and showing great determination as he proceeded through it.

Uno discussed the challenge of a free skate with five quads planned.

“It is a task that I need to do to win,” Uno stated. “The level of difficulty is really high and there are risks. But I feel a sense of achievement. I have the joy in training.”

Uno, who turns 24 in December, acknowledged that competing at the highest level in the sport can be stressful.

“Not every competition is fun. Sometimes I get really anxious,” Uno commented. “In the NHK Trophy I was able to go in almost like an everyday routine. It is really hard to say, but I think globally that [five quads] is something everybody is doing, so I have to do it to compete.”

Zhou blamed disruption in his training routine for his disappointing free skate.

“Doing a five-quad long program takes a huge amount of mental effort and lots of concentration and ability to compartmentalize different things in your head and take things step by step,” Zhou stated. “That takes intense training, consistent training every day, leading up to the competition to cement the mindset and the body to perform at peak condition.

What came as a surprise in Tokyo was the poor showing of Rino Matsuike, last season’s Japan junior champion and a legitimate contender for the Olympic team this season.

In both her short program and free skate, it was clear that something was off with the 17-year-old, who was third at last season’s NHK Trophy as a junior, but finished sixth this time behind winner Kaori Sakamoto and runner-up Mana Kawabe.

Matsuike revealed in the mixed zone after her free skate on Saturday that she is still dealing with the effects of an injury to her right ankle.

“I dropped some component scores, so I am very disappointed,” Matsuike stated. “I was able to at least enjoy the atmosphere of the venue in both the short program and free skate. It’s not just tears of disappointment, I’m actually very relieved that I was able to finish skating.”

One of Matsuike’s goals this campaign was trying to stay healthy.

Matsuike’s second Grand Prix assignment will be at the Cup of Russia in Sochi later this month.

“I have another competition in Russia. I want to make sure that I train hard and put another combination in the latter part of the program to help with the composition,” Matsuike noted.

Matsuike said her training routine was disrupted by the injury.

“After I hurt my leg, I wasn’t able to practice for almost a week,” Matsuike recalled. “When I take time off, I forget what it is like to skate and I don’t like that feeling. That is why my jumps were off.

“Even after I started training again, the flip/lutz, because it is my right ankle, my foot is painful because I use the toe,” Matsuike continued. “Even though I am feeling less pain, I am not rid of it. I want to go back to my former composition. I want to regain my knack for jumps and do all the training for Russia.”

Matsuike, who is coached in Nagoya by Uno’s former mentors Machiko Yamada and Mihoko Higuchi, knows she lost points as the result of her ailment.

“Doing all the combinations in the second half, that is really my strength,” Matsuike said. “I wanted to show my program in the best way. That is why I am disappointed. “I think I was able to maintain a strong emotional state. I know I will have another opportunity, so I will do my best for that.”

Matsuike labored ahead of the event, but saw something positive from her experience at the NHK Trophy.

“Leading up to the competition, I really struggled trying to get myself into a good place,” Matsuike stated. “It didn’t go well. It was pretty difficult every day. I think because I struggled, I am stronger mentally now. I need to work on being stronger mentally. I do think I was able to grow in this competition.”

With the inconsistent performances of Satoko Miyahara and Wakaba Higuchi this season, the battle for the third spot for women on the Olympic team, behind Rika Kihira and Kaori Sakamoto, remains wide open. Though it is unfortunate that Matsuike won’t be able to skate the GP Final, Ice Time still believes that she still has a good chance to be on the plane for Beijing.

Matsuike has almost six weeks before the Japan Championships in Saitama next month. If she can regain the form she showed last season, which featured stable jumps and elegant presentation, the odds still look good for her.

Higuchi won the Challenger Series event in Graz, Austria, on Saturday with a total score of 189.43 points. She excelled in her short program, hitting a nice triple axel in her routine to “Your Song” on the way to racking up a big score of 79.73.

Higuchi was unable to replicate the performance in her free skate, however, to music from “The Lion King.” She fell on her opening triple axel and had several other miscues. Her score would have ranked just fifth had she done it at the NHK Trophy.

The 20-year-old Higuchi’s career has been marked by potential that has not been realized. The high point was her silver medal at the 2018 world championships in a field missing Pyeongchang gold and silver medalists Alina Zagitova and Evgenia Medvedeva.

The Tokyo native’s win in Graz was her first international victory in four seasons, since she topped the podium at the Challenge Cup in The Hague in 2018. After medaling three times in her first two seasons as a senior on the GP circuit, Higuchi has just one medal in the past four seasons. That came at last season’s NHK Trophy against an almost exclusively domestic field.

Internationaux de France Up Next

Yuma Kagiyama, last season’s world silver medalist, will look to clinch his spot in the GP Final at the Internationaux de France in Grenoble this week (November 19-21), the fifth stop on the GP circuit. Kagiyama stormed back from seventh place to win the GP in Italy two weeks ago, setting a record in the process.

According to skatingscores.com, Kagiyama established a new mark for the International Judging System era (which began in 2004), by coming from 17.36 points down to top the podium in Turin. The previous mark had been held by Russia’s Maxim Kovtun, who overcame a 14.67 deficit to triumph at the GP in France back in 2014.

Kagiyama will be joined in France by teammate Shun Sato, who was fourth at Skate America. They will take on a field that will include France’s Kevin Aymoz, American Jason Brown and Russia’s Dmitri Aliev.

Japan will have no entries in pairs or ice dance in France.