India, Japan, US Conduct Joint Naval Exercises: Why It Matters

The recently concluded Malabar 2017 naval exercises mark a new high in cooperation in the maritime realm between India, Japan, and the United States. While Japan is a long-time security ally of the US, New Delhi has been inching closer to Washington, especially after the Modi government took office in India.

Under PM Modi’s watch, New Delhi has signed the LEMOA (Logistics Exchange Memorandum of Agreement), which allows Indian and US forces access to designated military facilities for refuelling and replenishment, thus marking a significant break in Indian foreign policy from the earlier ideological leanings. 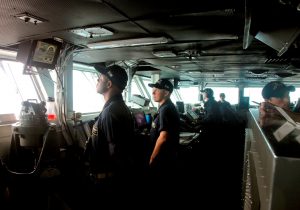 Malabar 2017 was conducted in two phases: the Harbour Phase and the Sea Phase. It brought together 16 ships, two submarines, and more than 95 aircraft in one of the biggest naval exercises in recent times.

From the Indian side, the highlight of its participation was its aircraft carrier, the INS Vikramaditya. The US Navy brought in the USS Nimitz supercarrier, while Japan brought in its helicopter carrier, the JS Izumo, its biggest warship in the post-World War II-era.

The maiden edition of the Malabar exercises was held way back in 1992 when it started out as bilateral naval exercises between India and the US.

While these three countries came together in the maritime realm, there has been a lot of churning in the regional dynamics of the Indo-Pacific too.

Firstly, these exercises come against the backdrop of the stand-off between India and China in the Doklam plateau region of Bhutan. Both New Delhi and Beijing are refusing to blink and it seems that the two countries are in for a long haul.

While on land, both India and China have limited options, it is in the maritime realm that both New Delhi and Beijing are exploring their options. China has recently established its first military base outside the country (in Djibouti) and this could well be an indication of things to come.

Secondly, the bilateral relations between Japan and India have been improving by leaps and bounds. As outlined by the Indian Foreign Secretary Dr S. Jaishankar in a recent speech in Singapore, “Gradually and steadily, Japan has emerged as a special strategic partner with whom India increasingly shares a global agenda.”

The fact that India and Japan are collaborating proactively in the maritime front signifies the gains in the ties. Earlier, the exercises in the maritime realm between the two countries were restricted to their coast guards. Separately, Japan and India also conduct bilateral maritime exercises known as the JIMEX.

Thirdly, Prime Minister Narendra Modi completed a successful visit to the US in late June, and this marked the first bilateral summit between India and the new US administration under President Trump.

Meanwhile, decks have been cleared for the supply of 22 Guardian drones from the US to India in a major defence deal worth more than $2 billion. During the last few years, the US has become one of the biggest suppliers of military hardware to India.

Fourth, for Japan too, the exercises are important as PM Shinzo Abe has repeatedly outlined the importance of the Indo-Pacific region for Tokyo. In September 2015, Japan’s Diet had passed the new security bills which to allow for its troops to be deployed abroad  for “collective self-defense” for allies. In addition, Malabar 2017 marked the first time the JS Izumo has participated in an exercise with other navies.

Why is Malabar 2017 Important?

Firstly, these exercises will help improve the interoperability between the navies of the three countries. It is also important to note here that Japan and India are also negotiating for the supply of Japanese-made US-2 maritime reconnaissance aircraft to India, although the deal seems to have gotten stuck in red tape. The Japanese Ambassador to India noted in a recent article that “Japan, India and the US are forces with common values, common vision, and common objectives, closely united to safeguard a rules-based international order in the Indo-Pacific and beyond.”

Second, India, US, and Japan have a common interest in seeing that the sea lanes of communication in the Indo-Pacific region are kept free and open. The joint statement issued during the visit of the Indian PM Modi to the US in June reiterated “the importance of respecting freedom of navigation, overflight, and commerce throughout the region.”

One of the thrust areas of Malabar 2017 was anti-submarine warfare, which assumes great significance owing to the increasing presence of Chinese submarines in the waters of the Indian Ocean region.

The US, under the Trump administration, has conducted Freedom of Navigation operations (FONOPs) in the region, even as China has laid claims to large sections of the South China Sea. Meanwhile, Chinese ships and aircraft have been repeatedly harassing Japanese defenses around the Senkaku region while Beijing has been eyeing a bigger role in what India sees as its own backyard, the Indian Ocean region.

Hence, though it seems that the situation in the Indian Ocean region will be far from stable in the upcoming period, Tokyo, Delhi, and Washington DC can count on each other and serve as stabilizing factors in a rough maritime neighborhood. This will be the biggest takeaway from Malabar 2017 for these three countries.