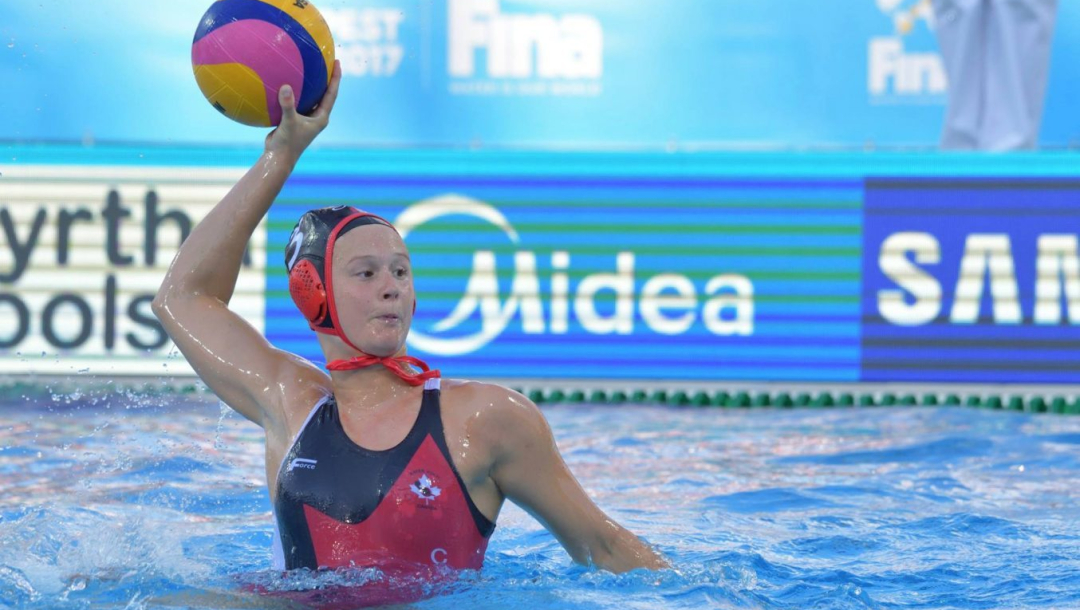 Water polo player Axelle Crevier is following in the footsteps of her mother, Marie-Claude Deslières, and those footsteps lead to the Olympics.

Crevier is a 24-year-old utility player for the Canadian women’s team, which qualified this year for the Olympics for the first time since 2004.

Deslières competed in the same event during the 2000 Olympics, when Canada placed fifth, and is currently an Olympics official for Canada. She also was the first female Olympic water polo referee.

The mother-daughter duo has already arrived in Japan, and they are currently in Morioka, Iwate Prefecture, in northeast Japan, before the Games begin.

JAPAN Forward talked with Crevier and Deslières about their experiences with water polo and expectations for the Olympics.


What does it mean for you to be competing in the Olympics?

Crevier: I think it’s a great achievement after all the years that we’ve put in.

It’s also a difficult time for everyone. It’s a good thing, but at the same time, we know we’re working through a pandemic. It’s both sad and a great achievement for an athlete.

What goals do you have for the Olympics? Any personal goals?

Crevier: Our objective as a team is to be on the podium.

Canada didn’t qualify for a long time, so we’re really happy to be here. We’ve been training a lot of times, and especially with this added year it’s been a long time. I think just personally, going [to Tokyo] and playing our best, and for sure, we’re hoping for a medal. That’s a good goal.

What significance does playing in the same event as your mother have?

Crevier: Anything else would have been really strange. It’s the only sport that I played and that I enjoyed a lot. It’s been in our family for a long time, since she played and I was introduced to it really young.

What are the elements that allowed your team to successfully qualify for the Olympics?

Crevier: The big thing that changed for this Olympics is the number of teams for the women’s event. We finally got ten teams that qualified for the Olympics, where there were only eight. We’re not at the same level as the men, but we’re trying to get there. So that helped us a lot since two spots were available. We won second place at the Pan-Am[erican Games], which is the qualification for the Americans. We won that in 2019 and we qualified.


What creates synergy in a water polo team?

Crevier: I think we have a great combination in the team of experienced players and young players. It’s a good duo, you need to balance out everything in the pool, since some people are more experienced, and know how to deal, where others are less afraid since they didn’t try that many times before. I think that’s a good thing for a team, and it paid off in the end.

What has training been like over this past year?

Crevier: We stopped training, well, in the pool. We never really stopped training. All the pools closed in March of last year, and we came back to the pool at the end of June. That was the longest we’ve ever been out of the pool, but we were still training on our own. For me it was a big challenge because I’m really used to training with my teammates and having a program to follow. We had that, but we all needed to do it on our own. Outside the water also is not really the thing that I like the most. I really like to train in the water, so that was a big challenge.

After coming back from all of this to train back all the basic stuff that we lost a little bit in the past months, and we had some big challenges also in training in the COVID year. We couldn’t touch each other, it’s a sport that uses a lot of contact and we couldn’t. We always needed to stay two meters apart, so that was hard.

Physically, we’ve reached a really good level right now, because we had that much time to just train our fitness. Skills wise, it’s a little bit different, since we didn’t have that many opportunities, and that’s what we lost. That’s what we left three months ago, to be able to train with routines, since we couldn’t do that. We were just on our own for the last year.


Did you have to get creative with your training?

Crevier: I went to swim in my parents’ backyard, with an elastic on the spot. Also really not my favorite…

Deslières: And you were wearing a wetsuit.

Crevier: Because it was really cold.

Deslières: It was too cold. The pool was not heated.

Crevier: We did that, we trained a lot with the balls outside the water, just shooting at a wall. We did a lot of videos on our own. We just invented a couple of new exercises that we’ve never done before, just to be on track with everything.

What has changed in Olympic water polo since you competed?

Deslières: They changed a lot. When I competed in 2000, only six teams were at the Olympics for women in water polo, now it’s ten. The level has increased incredibly, the women now are stronger, faster, the tactics are much better, everything is much better. I guess it’s the same in every sport.

The level has increased in twenty years incredibly. That’s basically what has changed: everything.

Does the Olympics have a personal significance to you now that your daughter is competing?

Deslières: Sure, I’m a proud mother now. I’ve always been proud of my kid, but now it’s something a little higher now in the pride, that Axelle can actually attend these famous Games.

It’s just a little sad that these Games will not be as overwhelming as they should be. Because of the pandemic and everything, they have to have these measures. That’s a little sad for all the athletes that have been working so hard to get there, that they won’t have this big opportunity to see that big party, and all these things that are normally going on at the Olympics. But, they will still have a chance to compete, and that is the most important thing.

What has your arrival to Japan been like? Any first impressions?

Crevier: We trained in Morioka two years ago, so we know the place, we’ve been here before. Sadly, now, we’re not allowed to go into the town and everything, because of COVID-19, but in my memory it was a great town with plenty of things to do.

Now, we’re basically just training at the pool, with great venues and everything they have for us. They’re being really good hosts for us, so it’s great.

Axelle, what message do you have for your fans in Japan?

Marie-Claude, do you have a message for women aspiring to be athletes, or fans in general?

Deslières: Absolutely! For women, it’s our time to get involved in everything, in every aspect of life. And sports is a big one, and team sports, we have to be in team sports. It’s so fun, it’s a group.

Women, young girls, they should play water polo. It’s such a fun game, and they can get involved in refereeing as well. When I played in Sydney, in 2000, there were no female referees. This time, in the Tokyo Olympics, there will be four women water polo referees.

So let’s go girls, come and join us! In the water, outside the water, we also have coaches that are female. It’s time to get involved.