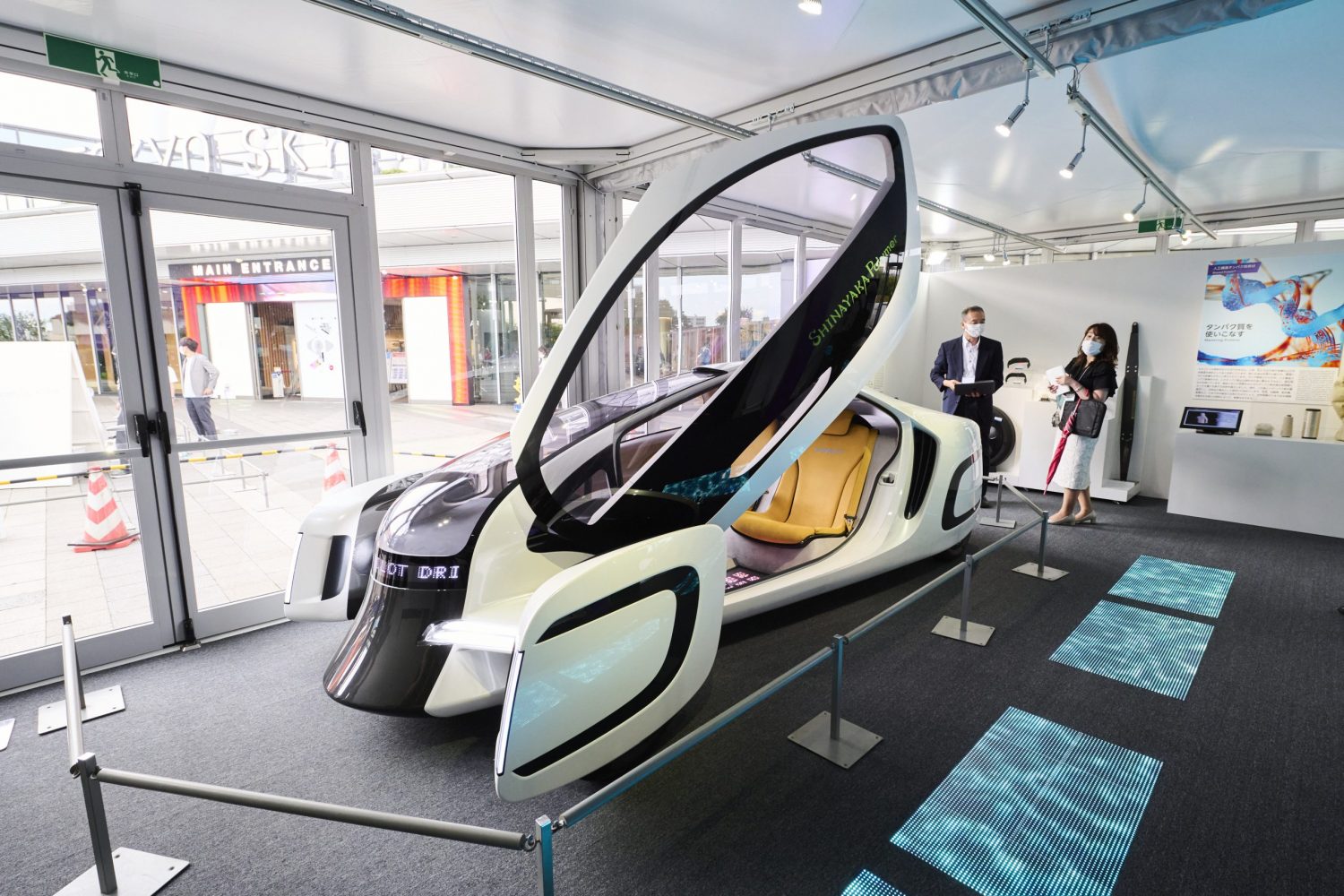 SHINAYAKA Polymer Car, Made out of Material which is thought to be safe, secure and with low environmental impact.

Innovation, technology and research accomplishments fascinate us as they drive society toward the future. To glimpse what that might be like, stop by the “Society 5.0 Expo” currently underway at Tokyo Skytree Town until July 28.

Organized by the Cabinet Office of the Government of Japan and Japan Agency for Marine-Earth Science and Technology (JAMSTEC), the exhibition is a showcase of more than 200 innovations leading Japan into Society 5.0, a concept proposed by the government that focuses on living with human-centric technology and innovation.

Shinji Inoue, Minister of State for Science and Technology Policy and Space Policy,  gave remarks on the exhibition, saying that “This exhibit will act as a catalyst for people to imagine a little bit about what Society 5.0 will look like.”

The exhibit underscored the theme of exploration. From the deep sea to outer space, the technology that has been used and will be used to discover more about the universe was highlighted all throughout the exhibition.

Modeling and Mapping the Deep Sea

One technology that can be seen is a camera and artificial intelligence system that is used to map out surfaces of the sea. The camera used is a relatively simple one, the likes of which can be found in a smartphone. It is placed aboard the Shinkai 6500 state-of-the-art submarine. (A full-scale model of the submarine is also at the exhibit.)

The software, created by JAMSTEC, puts together a 3D picture of the surface from just one sweep around, and the artificial intelligence system recognizes and counts organisms captured on camera, a process used to identify changes in the environment.

The system makes this process much more efficient because it reduces the number of scientists needed. In the future, JAMSTEC plans to advance the technology by creating a way for the machinery to catch an organism for further research.

Another JAMSTEC innovation that can be found in the exhibition is an under-sea vessel used to map out the ocean floor. Takeshi Nakatani, Deputy Group Leader of the Marine Robotics Engineering Group at the Institute for Marine-Earth Exploration and Engineering at JAMSTEC, stressed the importance of mapping the ocean floor:

“For example, we have been able to map the topography of the moon up to a 10 meter mesh. Compared to that, our current topographical map of the deep sea is a 1000 meter mesh. It’s very rough.”

The ocean floor is impossible to accurately map out from the surface. The submarine maintains a height of 100 meters above the ocean floor and has the ability to chart out the surface to the 1 meter level, even autonomously. These topographical maps are useful for under-sea cables and pipelines.

The vehicle is made with extreme precision, balancing the weight of the front and the back, as well as the left and right sides. To achieve this, the weight is calculated down to each nail, and special low-density materials that can withstand the intense pressure under the sea are used.

Exploring the Realm of Outer Space

The star of the outer space portion of the exhibit is the returned Hayabusa2 capsule, which sent samples of pristine materials from the asteroid Ryugu back to Earth in December 2020. RELATED: Hayabusa2 A Spectacular Success as it Sends Promising Gifts Back to Earth

The next challenge, says Yoshio Toukaku, Director for International Strategy and Coordination at the Institute of Space and Astronautical Science at JAXA, is getting to Mars. RELATED: Moving to Mars: What the Japanese are Researching About Living on Another Planet

Additionally, a small-scale model of a vehicle for exploring the surface of the moon being developed by JAXA and Toyota is exhibited. The lunar rover will be in use and people will be able to conduct research in it by the end of the 2020s and into the 2030s. The new technology will make the vehicle available for use for longer periods of time, and the wheels allow the rover to be mobile and be able to work in different locations.

Mr. Toukaku said that the vehicle will use frozen water, known to be on the moon, to power itself, and thus will run on hydrogen.

The quirks of living in space and conducting research on the International Space Station can also be seen, for example through an array of space food. The exhibit contains a display of a selection of Japanese foods like yokan and onigiri. These foods are made especially for space through dehydration, along with considerations to ensure that small pieces won’t fly away in the low-gravity environment and that the foods won’t spoil.

Mr. Toukaku noted that the Japanese foods, as well as other international foods other than just those from the United States or Russia, allow astronauts from various countries to be exposed to the cultures of their fellow scientists.

In addition to the materials presented by JAXA, companies presented their innovations in aerospace technology and other related fields.

Society 5.0 of the Future: Applying Technology to Wider Society

On the fourth floor of Skytree was a pavilion aptly called “Society 5.0 of the Future.”

Compared to space exploration and deep-sea technology, this section had a very different aim: showcasing how various businesses and researchers were developing technology in ways which would help the society of the future.

For those in the field of robots, many will know the company Cyberdyne Inc. Started in 2004, the business has realized a “Hybrid Assistive Limb (HAL).” In concrete terms it means the world’s first wearable cyborg, and it is applying its technology to the field of health and medicine.

How it works is that the technology reads through the skin bioelectric signals to read the brain messages that communicate the order, for example, to a limb to walk.

The technology is currently being tested to use for those recovering from injuries who might need either full or partial assistance in walking or standing up. On July 23 2021, the company announced positive results in a trial that occurred over four years with 52 patients who suffered hemiplegia due to stroke. The company is now trying to apply for manufacturing and marketing approval of HAL as a medical device for stroke patients in Japan.

In the field of sport and rehabilitation, Kobe University is using weight and muscular data to develop 3D printable customizable running shoes to fit people’s unique body types. The research is already being used by sneaker producer ASICS.

“Until now, we have worked with athletes in marathons. But in the future, we want to work with those who have been injured and are going through rehabilitation,” explained Professor Toshiya Kaihara, director of the Value Creation Smart Manufacturing Research Center.

“We would like for everyone to feel the joy of walking again, or running again, and we think we can do that in many different ways, with order made shoes,” said Dr. Kaihara.

When we think of the society of the future, many of us think of cars. In the immediate future, this might mean electric vehicles which use hydrogen technology. But there are those who are dreaming bigger.

SkyDrive is a Japanese company developing the first flying car technology. The vehicle, compact and light, looks like a sleek sports car with four small helicopters in each corner, is born from the mix of aircraft, drone and automobile technology.

In fact progress is going fast, as in August 2020 the company carried out the first manned flight of the vehicle in Japan, which lasted a full four minutes. There are of course issues, as “One of the main issues is the weight. Currently this vehicle can carry one person, but the heavier it is, the more unstable the flight can become,” explained SkyDrive PR Mayumi Ishii, who was present at the pavilion.

She concluded: “We hope we will have a final version by approximately 2040, but we are aiming to have a vehicle flying by the Osaka Expo in 2025.”

RELATED: ‘Flying Cars’ that Don’t Require a Runway: Are You Ready?

With Japan as a region which is prone to natural disasters, many innovators are also developing technology to help when disaster strikes.

The National Institute of Information and Communications Technology (NICT) is one such place, and specifically the lab led by Kazumasa Taira, Ph.D, director general at the institute and head of a lab researching electromagnetic technologies. Their device at the Society 5.0 Exhibition acts as a survey camera of the earth’s surface, and can be attached to planes to survey a damaged area.

“By using electromagnetic technology, the advantage is that it works also at night, and through the clouds. The most recent version [of the device] can detect objects that are 15-centimeters apart.”

In the case of the most recent heavy rainfall that hit Shizuoka in early July, NICT is also helping to develop devices which could help in identifying where victims might be and their recovery.

Seiji Kawamura, Ph.D, explained how remote sensing technology, or radars, has been developed at NICT. The sensor, which looks like a huge antenna, can rotate and capture slices of images of rainfall intensity in just 30 seconds. “With previous technology, it took 5 to 10 minutes to survey a given area. By using this (new device), we can be aware of heavy rainfall in seconds.”

The topic of sustainability has gathered attention worldwide, and this exhibition. Beyond talk,though, it was a great showcase of the many applications for technology in the world of sustainability.

One example which stood out was that of WOTA, a company founded in 2014, which has the ambitious aim of bringing “Water freedom for everyone, everywhere.”

In 2019, the company developed the WOTA Box, which won the Good Design Grand Award in 2020, and for good reason. It’s the first portable water recycling plant, which was thought up to provide portable showers. By using unique sensors and AI technology control, it can reuse 98 percent of domestic wastewater, and it offers ways to access and use water without the use of a conventional water infrastructure.

What does it mean in practical terms? With just 100 liters of water and electricity, 100 people can take a shower. Considering that in a regular household, one person uses 50 liters of water for a shower, WOTA Box gives hints of how we could also improve domestic water systems in homes and elsewhere in the future.

The company’s most recent application of WOSH is a sink which needs only 20 liters of water and electricity. The sink can service handwashing for 500 people, and a fun fact is that the structure itself is made by upcycling gasoline metal barrels.

“By using AI technology, 20 liters are recycled and used effectively, and this makes it a perfect fit for restaurants and shops, but even disaster affected areas where water isn’t easily accessible,” explained the sales group manager Sachie Takebashi, concluding: “For now, this technology is only available in Japan, but in the future, we hope that it can be exported also abroad, to those who most need it.”

Society 5.0 the exhibition can be enjoyed at Skytree until July 28. For more information on how Japan is investing in the society of the future, click here.