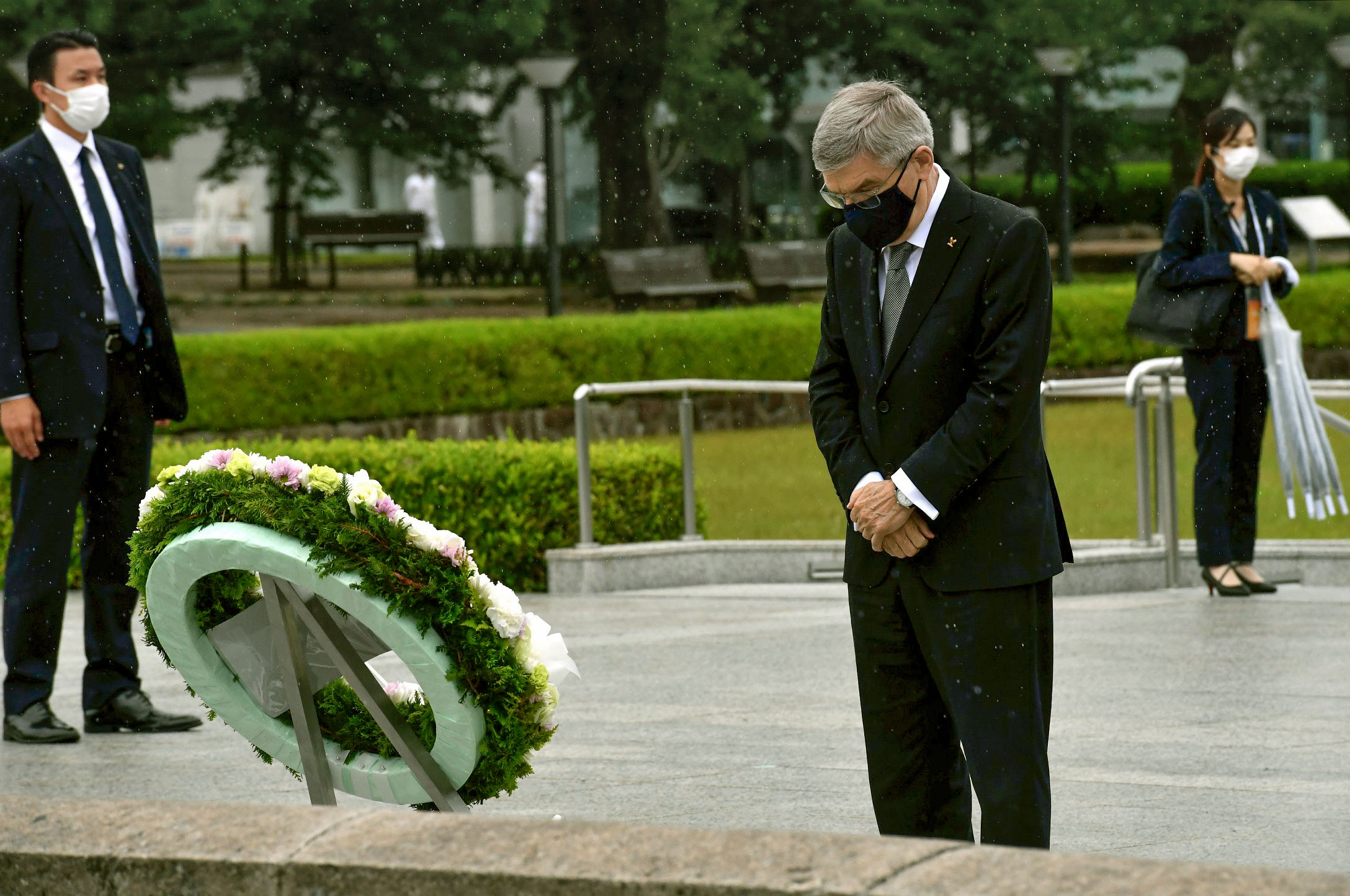 International Olympic Committee President Thomas Bach proclaimed the start of the Olympic truce upon his arrival in Hiroshima on Friday afternoon, July 16.

During his visit, Bach also laid a wreath in the cenotaph at Hiroshima Peace Memorial Park.

The 67-year-old German, who was elected IOC president in September 2013, also went to the Hiroshima Peace Memorial Museum a week before the Opening Ceremony of the Tokyo Olympics at the New National Stadium, and he visited the Atomic Bomb Dome.

On his one-day trip to Hiroshima, Bach spoke about the role of the Olympics to promote global peace.

“This peace mission continues to be at the heart of the Olympic Games,” Bach said in a speech. “Today, I am here to remember all the people who are commemorated at this very place. I am here to reaffirm our peace mission and to pay our respects to Hiroshima, as a city of peace.”

Bach called the Olympics a “beacon of hope for a better and more peaceful future.”

The declared Olympic truce began on July 16 and runs through September 12, seven days after the Paralympics Closing Ceremony.

“It is our hope that the Tokyo 2020 Games will provide an opportunity for the world to hope for peace and to reflect on the importance of peaceful resolution of conflicts,” the Tokyo 2020 Organizing Committee said in a news release.

In the ancient Greeks’ Olympic Games around 2,800 years ago, an Olympic truce was observed. This was implemented to help secure safe travel to and from the Games for athletes and others involved. Warring city-states were a constant for the ancient Greeks.

The IOC decided to revive the tradition in 1992 and the United Nations adopted a resolution the next year for the formal proclamation of the Olympic truce to take place. The modern Olympic truce was first recognized at the 1994 Lillehammer Winter Games, and the practice has continued ever since.

U.N. Secretary-General Antonio Guterres voiced his support for the Olympic truce in a video message while noting “enormous obstacles” have been present as athletes prepared for the Tokyo Games.

“We need to show the same strength and solidarity in our efforts to bring peace to our world,” Gueterres said in the video, which was released on Thursday, July 15.

He added: “In a few days, athletes from around the world will come together for the Olympic and Paralympic Games. The truce is a traditional call to silence the guns while the Games proceed. … People and nations can build on this temporary respite to establish lasting ceasefires and find paths toward sustainable peace.”

Guterres does not plan to travel to Japan during the Olympics, his spokesperson’s office announced.

On a broader scale, the IOC and Tokyo 2020 organizers will observe the Olympic truce in a few ways.

A Tokyo 2020 Organizing Committee news release outlined the plan, stating: “Olympic and Paralympic Truce murals will be displayed in the Village Plaza at the Olympic and Paralympic Village during this time, with athletes encouraged to sign the mural thereby showing their support for the ideals of peace and the respect of the rights of people with disabilities.

In addition, Tokyo 2020 will continue to use social media to encourage participation in Tokyo 2020’s unique PEACE ORIZURU project, whereby people are asked to make paper cranes while calling for peace. In such ways Tokyo 2020 will seek to promote the desire for world peace, a common wish of all humankind.”

More information about the PEACE OZURU project is posted here.

In addition to annual remembrances for the victims of the Hiroshima atomic bomb, Japan’s Olympic history is also directly linked to August 6, 1945. Yoshinori Sakai, who was born on that day in Hiroshima, lit the cauldron during the Opening Ceremony at the 1964 Tokyo Olympics.

Bach’s visit to Hiroshima amid the pandemic was not welcomed by all. Staging the Tokyo Olympics at this time is tied to a vocal opposition.

“Holding the Olympics under the current situation where many lives are lost [due to the virus] runs counter to the spirit of the Games that is supposed to be a festival of peace,” Kunihiko Sakuma, who oversees a hibakusha group for survivors of the atomic bombings of Hiroshima and Nagasaki, was quoted as saying by Kyodo News.

Earlier in the week, Bach insisted his trip to Hiroshima wasn’t tied to political motives, according to published reports.

“This is the message we are going to send in the city of peace of Hiroshima,” Bach was quoted as saying by British newspaper The Guardian. “This will have nothing to do with politics. We will not politicize this visit in any way.”