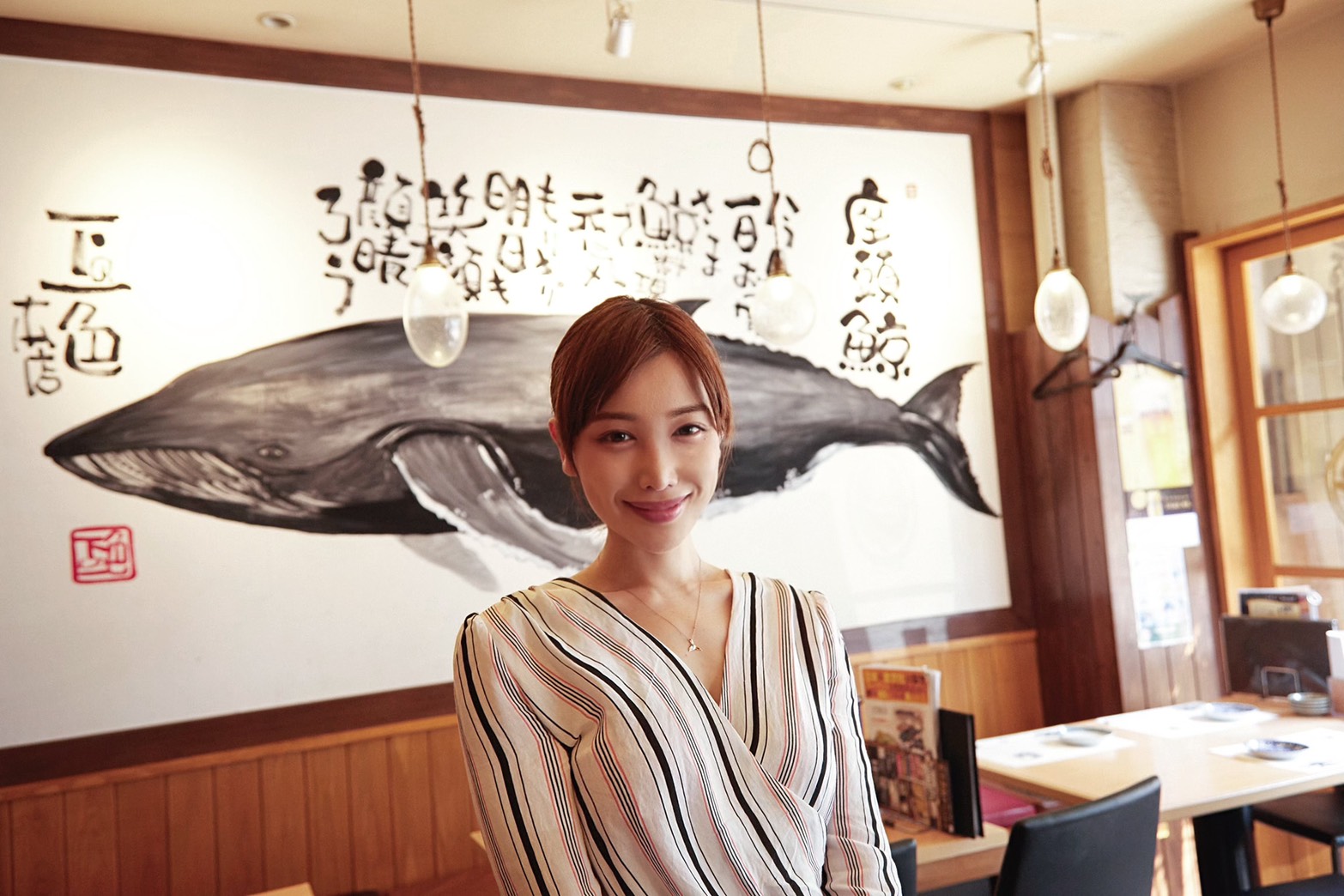 Asana Mori, a popular YouTuber, is the centerpiece of website Kujira Town‘s first interview in a new series with people who love whales. She shares the best methods of cleaning and preparing seafood such as whale meat and fish on her YouTube channel SAKANAYA no MORI-san. Her channel also features fresh seafood sold at Kotobuki Showten, a seafood wholesaler run by her father.

Mori’s YouTube channel hit 44,800 subscribers as of June 2020, with her cooking videos using whale meat the most popular. She has appeared on local TV programs in Nagoya and many times on national TV as well.

We asked her what makes whales so fascinating! Excerpts of the interview follow.

Working in Another Industry First Brings New Value to the Business of a Fishmonger.

You worked in another industry for a while after graduating from college. When did you start working for Kotobuki Showten?

I started working for Kotobuki Showten when I came back to Nagoya about 10 years ago. I always wanted to work for the company, but I decided to explore the outside world first to master something that I could eventually bring to Kotobuki Showten.

Children who Dislike Fish Because of Fishbones are Missing Out on So Much!

Why did you decide to create a YouTube channel?

Fish might seem like a familiar subject, but there are many types of fish that people don’t know about. I wanted to share my knowledge of fish that only a fishmonger would know.

Also, many friends my age are married and have children, and they often tell me how their children refuse to eat fish because of the fishbones. I get so frustrated! It inspires me to create videos to convince as many people as possible that fish is delicious.

Mori Enjoys Spreading Her Love of Fish to the World through YouTube.

What has the response been from your viewers?

I can see the impact of my videos through the comments and likes, but the most overwhelming experience for me was the reaction of the participants at a collaborative event I organized late last year with another YouTuber. We received participants from all over the world, with children coming back to us repeatedly asking for some more of the ‘delicious shirako’ (soft roe) or ‘delicious ankimo’ (monkfish liver).

YouTube is a fascinating world. When I work at the restaurant, I can only wait for customers to come to us, but with YouTube, I can reach out to the world. I realized that we could use YouTube to empower the entire seafood industry.

Learn About Whale Meat First, Before Letting the Controversy Stop You!

Your videos about whales seem especially popular. Is there a special reason?

I’ve always wanted to make videos about whales. I could tell from the comments that many of my viewers had never eaten whale meat before, but my videos encouraged some of them to purchase whale meat from Kotobuki Showten’s online store.

Some viewers from overseas made comments in English like, ‘How could you eat those poor whales?’ but I hope my videos will be informative to them, too.

Eating whale meat is a new concept for many people, so I think it’s important to make them curious for a taste. A piece of whale steak would be visually appealing, for example. Of course, traditional dishes like the hari-hari nabe (hari hari whale hot pot) are also very delicious, but I try to create visually-appealing recipes that make the mouth water.

I’ve only used lean meats so far, but I hope to introduce other meats like whale tongue bacon. It’s fun to brainstorm and discuss new recipes back and forth with the company president.

Overcoming Bad Impressions of whale meat from the school lunches of childhood.

The best part is its taste, for sure. I found out when serving customers at the restaurant that different generations have different impressions of whale meat. The older generations say, ‘I had it for school lunch but it was tough to chew’ or ‘I never want to eat it again because it has an unpleasant smell.’

When they finally relented after my persistent urging, it’s satisfying to see them react exactly as I had anticipated. It’s so delicious they can’t believe they’re eating whale meat. I would say, ‘I told you so!’ and show them my other recommendations.

The younger generations and students would sometimes order our rare steak bowl without knowing it was whale meat, and when they find out they are pleasantly surprised.

Who don’t you provide detailed explanations of your dishes?

I used to add phrases like ‘Let’s eat whale meat,’ which is a common phrase used in that kind of campaign, but I think it makes people more reluctant to try it because they start worrying about whether eating whale is wrong.

We heard that Kotobuki Showten has special events on Whale Day, which was officially designated as a special day in 2012 by the Japan Whaling Association. What kind of events have you had so far?

We only started this since Whale Day was established, so we haven’t had much experience. We offer half-price on whale meat dishes and organize a lucky draw exclusively for customers that order a whale meat dish. We devise different ways to encourage people who have never tried whale meat to take advantage of the opportunity.

Our special events continue for about a month, and not only on September 4, so that we can share our love for whales with as many people as possible.

Your customers must be waiting eagerly for Whale Day this year?

I hope so. I want my customers to be excited because we’ll be trying out new things this year, too.

(Kotobuki Showten Inc. was founded in 1980 as a wholesale fishmonger business. The company now operates 12 restaurants and a wholesale business for fresh seafood, mainly in Nagoya, Aichi Prefecture. Asana Mori is Managing Director of the company. Her YouTube channel is SAKANAYA no MORI-san.)