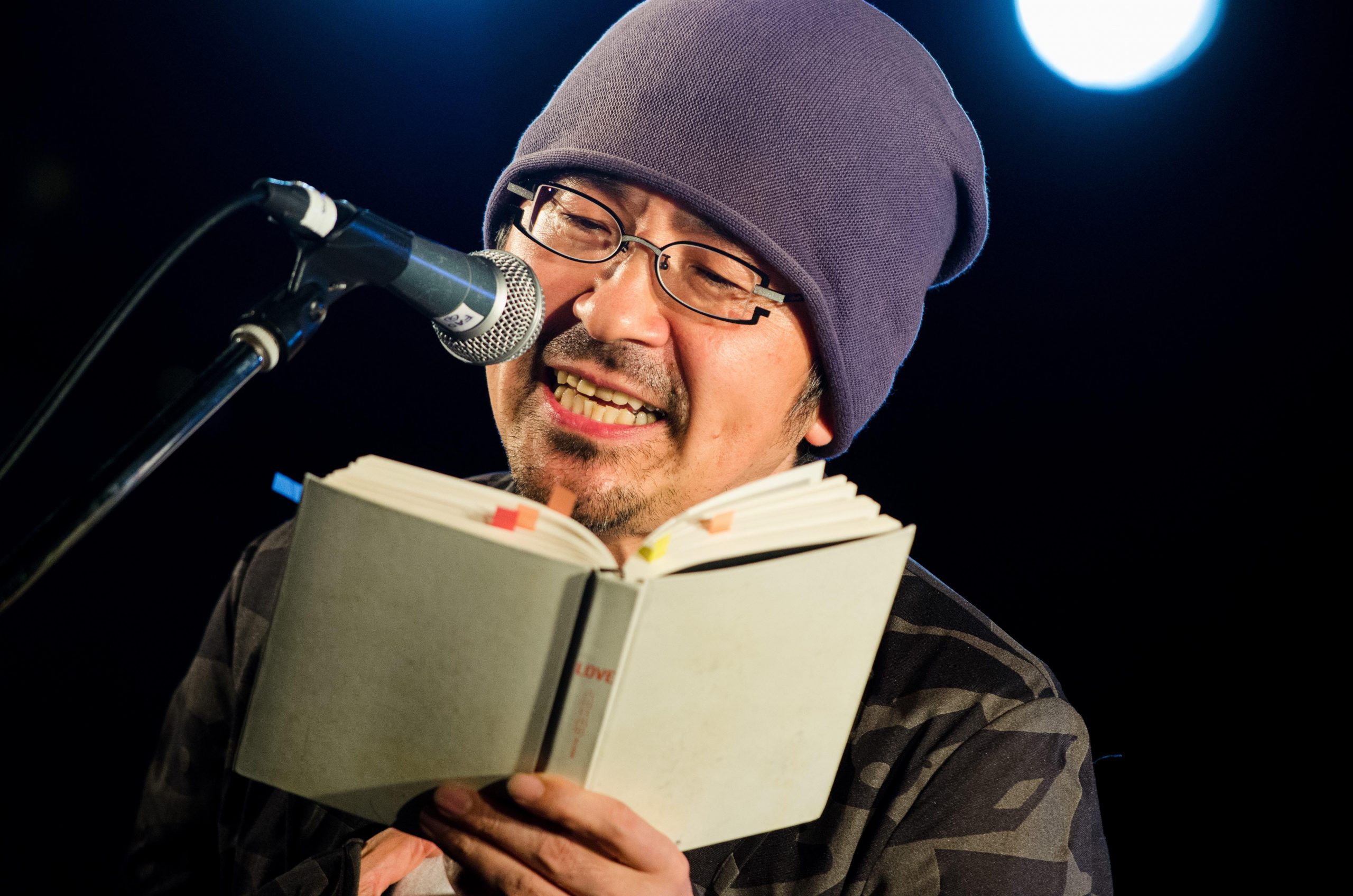 Hideo Furukawa at the Contemporary Japanese Cultures Festival organized by the University of Bologna, Italy. (Photo by Eisuke Asaoka)

Almost twenty years ago, Hideo Furukawa – one of the most significant contemporary Japanese writers and winner of many literary awards – wrote the dystopian novel Soundtrack (Shuehisha, 2003, in Japanese サウンドトラック, Italian title Tokyo Soundtrack). He perhaps never imagined that most of the things he recounted would come true.

The protagonists of this 700-plus-page story are Touta and Hitsujiko, two young teenagers on the fringe of society, and Leni, who can change sex depending on where he/she is. Leni becomes friends with a black crow called Kuroy (black).

The story is set in a dystopic Tokyo, which has become a “heat island” and a place where epidemics, insects, and guerrilla warfare make their appearance.

Hideo Furukawa was the guest of honor at a conference on contemporary Japanese cultures festival organized by the language, literature, and modern culture department of the University of Bologna (Italy) in May 2022. The conference focused on the theme of dystopia.

Soundtrack came out in Japanese almost 20 years ago. It is a dystopian story, but it seems to have predicted a lot of recent events. Did you ever imagine that what you wrote so long ago would one day be so close to reality?

Soundtrack is certainly a dystopian story and reading it today it really seems like a prophetic novel.

However, I did not write a story that finishes tragically with the end of the world.

Rather, I proposed the possibility of creating a different world through what, twenty years ago, was the power of my imagination. It was therefore a dystopia from which one could free oneself and lead to the creation of another society.

Certainly, compared to the present day, when circumstances are very difficult, the element of despair emerges more strongly than that of hope. But I am sure that in the years to come the element of hope in the text will emerge.

Today we face many problems. But all of our current misfortunes are manifestations of the mistaken systems we have pursued in the past.

The current problem of global warming or the exaggerated use of electricity are challenges. But on the other hand, they can be seen as opportunities to improve ourselves.

The female protagonist of Soundtrack, Hitsujiko, has a special talent. She is very good at dance, a medium she uses to make her own revolution. How important are dance and art in your life and in your poetry?

I have always liked dance even though I have been following it less recently. That is because dance is a medium that manages to communicate without using words.

Both for those who do it and for those who watch it, there is no need for verbal communication. That’s why I thought that dance could be an element used to go further and Hitsujiko could use it as a medium for her own revolution.

Even the title, Soundtrack, refers to the art of music, although one of the main characters, Touta, cannot hear the music. What did you mean by this?

But Touta is a child who has “lost” his name (the literal meaning of ushinau, 失う). The boy’s father died as a child, so he knows that his name is Touta but does not know the kanji to write it.

The parable of Touta, who at one point arrives in Tokyo and lives through various experiences there, is that of a young boy in search of his soundtrack, his ten songs.

Let me explain. If we were living in the Middle Ages and there were stories like King Arthur, we would have knights going in search of a sword. The sword is a test of sorts.

What is necessary for the modern age and the future is to look for something which is no longer material, but is immaterial.

Therefore, [we need to look for] something that is not visible but that resonates in people’s hearts. That is precisely why I created the character of this young boy who will make the discovery of music. Music is very important.

Why did you choose very young teenagers as protagonists for this novel?

But those from outside, let’s say the case of a Japanese person coming to live in Italy, can perceive these differences.

In this case, one of the protagonists, Touta, lives in Tokyo but in an area on the fringe of society. He then grows up and approaches the center [of the city], but always as an outsider. [This storyline] gave me the opportunity to better describe some situations and their differences.

You are a Japanese writer whose work has been translated into many languages. What do you think of the international interest in Japanese culture?

It must be said that the Japanese like to respond to what is demanded from outside.

For example, even Zen Buddhism, or pop culture like animation and so on, are elements that are actually demanded from the outside and are proposed as if they were extraordinary elements.

Just think of the contrasting ideas of kabuki [theater] and robots. In truth, very few young people today have seen kabuki. I know Nōh [theater] because I was interested in performing arts, but most young people do not have this kind of knowledge.

The same applies to robotic engineering. Very few people have had anything to do with robots. It is a different image from the real one. This means that there is almost a complex, a constant preoccupation of the image that one wants to put forward. Then, there is a kind of sense of detachment, of disgust from this complex.

This dystopia is different from that of Soundtrack, which I wrote twenty years ago. Authors who write about dystopia today do so as a criticism of Japanese society. They write this kind of novel to tell the Japanese what the situation is.

Do you mean that there is a kind of rift between what is shown outside and what is inside Japan?

Outside, Japan shows its traditional culture or robotics. But, on the inside, Japan is experiencing a series of contrasting realities and dystopias.

Japan now is like a girl who, when she is at work, is pretty and cheerful and everyone says “Oh, you are so pretty and cheerful.” When she goes back home, she feels, instead, despondent and gloomy. This [latter] part is what is portrayed in the novels.

Only when this girl tries to bridge the gap between these two sides, will she turn the problem around. Japan is now at this stage.

Now Italy, or other countries, are only attracted to one side of Japanese culture. But if the dystopian element comes to the surface, this could be perceived as a further element of interest.


You come from Fukushima, which suffered the terrible tsunami and nuclear accident in 2011. There is talk of reactivating nuclear power plants, what do you think?

With Russia having invaded Ukraine, there is an energy crisis going on and I’m really afraid that Japan is going to reactivate nuclear plants.

Now there is a crisis and all those who are thinking about reactivating nuclear power plants and rearming, think they are doing all this for the future, but are actually not looking to the future but to the present.

I will be brief and really take a literary approach, those who have forgotten what happened eleven years ago in Japan have no right to speak for the future of the nation. And the same goes for those who have forgotten what happened with the war in Japan and have no vision of what it may be a hundred years from now. The only thing I can think of is that it’s a laughable idea.