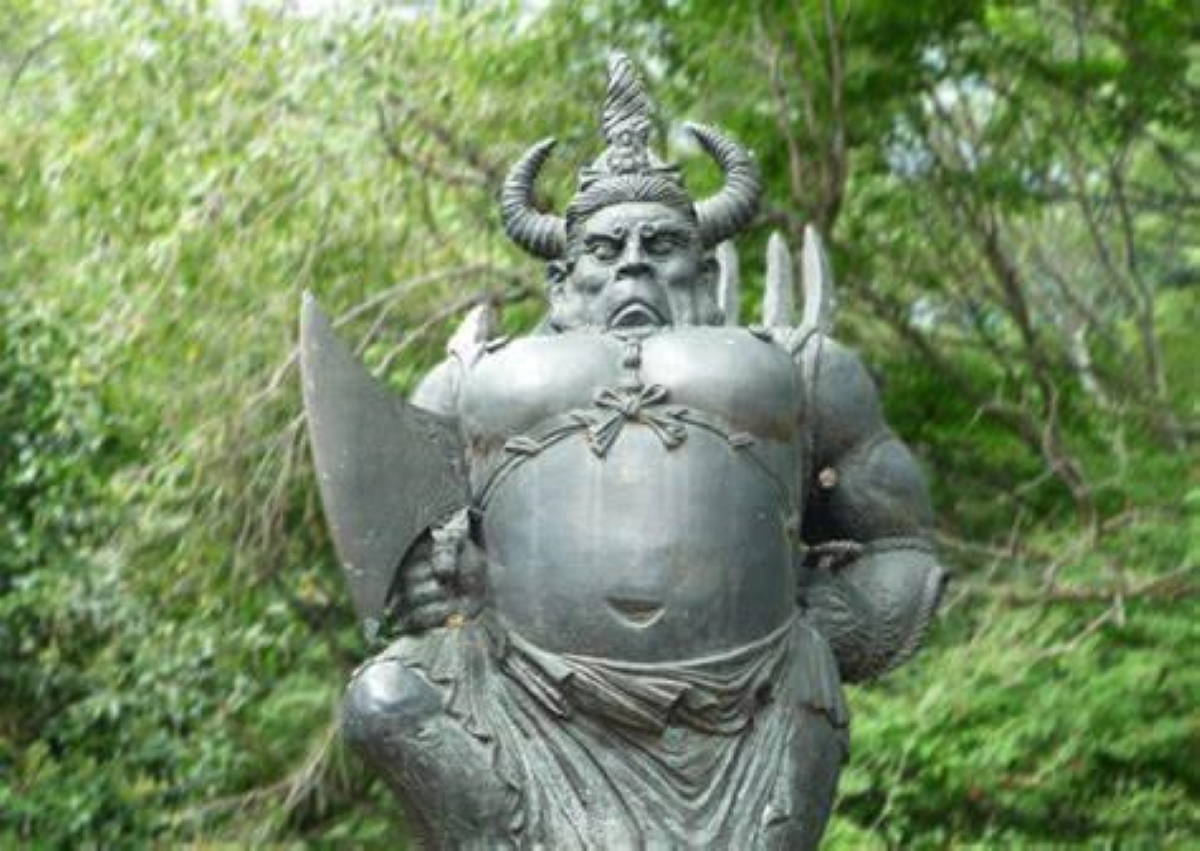 At Takedera, a statue of Gozu Tenno, a prominent deity behind the Gion Matsuri (photo provided by author.)

Fifth in a series

Returning to our original question, how does Susanoo-no-Mikoto fit into all of this? And how can the Yasaka Shrine claim that he and Gozu Tenno are one and the same?

According to the Nihon-Shoki, also known as the Nihongi, an official history which was compiled around 720, on one occasion after Susanoo had been expelled from the Plain of High Heaven for his many misdeeds, the truculent exiled kami traveled to the area of Soshimori on the Korean Peninsula, which in ancient Korean supposedly meant “Ox Head Mountain.”

Nevertheless, the first record explicitly linking Gozu Tenno and Susanoo dates from the Kamakura Period, five centuries later, in the form of a previously unknown surviving fragment from the Bingo no Kuni Fudoki or Gazette of Bingo Province, as quoted in the late 13th century Shaku Nihongi annotated text of the Nihon-Shoki. Bingo Province was an area that is today the eastern part of Hiroshima Prefecture. The Fudoki itself was written in the early eighth century during the Nara period.

This extant fragment contains a story involving Somin Shorai that is almost identical to the earlier available sources, except that the traveling deity is a god from Korea named Muto-shin instead of Gozu Tenno.

In this version, after exacting his revenge, the god reveals to Shomin Shorai that he is in fact Susanoo-no-Mikoto. This, along with the fact that Susanoo-no-Mikoto was the god of curses and believed to bring epidemics, is the principal evidence cited by those who contend that Gozu Tenno and Susanoo-no-Mikoto are one and the same.

Vying to be Gozo Tenno

Adding to the confusion, some scholars believe the excerpt was a forgery, produced during a period of native reaction following the two unsuccessful Mongol attempts to invade Kyushu, when there might have been reluctance to worship a foreign god of this kind.

There are also researchers who believe that this epidemic god Muto-shin originated in the Korean Peninsula and is the same deity as Gozu Tenno, but with another name. Other scholars believe their origins are totally different, although their stories are quite similar and probably got mixed together.

As a matter of fact, Somin Shorai stories were quite common throughout Japan. So identifying their ultimate origin is a truly daunting task.

There is some evidence that a cult involving the Somin Shorai story existed on the Korean Peninsula before it ever reached Japan. Buto Tenjin, apparently another name for Muto-shin, was an ancient god of Silla. That would explain the Soshimori Ox-Head Mountain connection.

But it begs the question of whether Muto-shin was really Susanoo-no-Mikoto or a Korean god. Or if they were the same, does that mean that the kami of Japan and Korea (at least Silla) were the same?

And in which country did the Shorai brothers live? As you can see, it all gets quite confusing.

Talismans from the Edo period in the name of the Gion Daimyojin list the names of both Gozu Tenno and Susanoo-no-Mikoto. This does not necessarily mean that they were worshiped jointly or as separate manifestations of the same deity.

There are also some notable differences between the stories of Gozu Tenno and Muto-shin. After his stay in Korea, Susanoo-no-Mikoto is said to have gone to the Izumo area [in today’s Shimane Prefecture]. There, according to the Kojiki, he conquered the fearsome, eight-headed, eight-tailed serpent Yamata no Orochi, thereby saving Kushinadahime-no-Mikoto, who then became his wife. She was the daughter of local offspring of mountain kami in the Izumo area, while of course Harisaijo was the daughter of a dragon king.

The Gionsha also had a dragon god and snake connection. Recall how Gozu Tenno was traveling to the South Sea to marry the daughter of the ocean god, in other words a “dragon king.”

There was also said to be water under the Gionsha and a secret tunnel leading to an underground pond where the dragon god lived. On the other hand, Susanoo-no-Mikoto himself is also regarded as a god of the ocean and storms (true to his volatile nature).

As you can see, mythology can quickly turn into a labyrinth all its own.

It is also interesting that both Susanoo-no-Mikoto and Gozu Tenno are identified with the underworld. Susanoo was in fact called the lord of the underworld, something like a Shinto counterpart to Enma the “Ruler of Hell” in Buddhism.

The Kojiki recounts how early on Susanoo defied his father Izanagi because he wanted to visit his mother Izanami in Ne no Kuni, the Shinto hades. The Hoki Naiden also refers to Gozu Tenno as a “Demon King” who uses occult methods to appeal to the underworld.

One thing is for sure, the cult of Gozu Tenno spread throughout Japan. Take for example the place name Hachioji, the city west of Tokyo, which refers to his eight sons. The expression Hachioji (“Eight Princes”) appears in the Japanese translation of the Lotus Sutra, and then there are the Eight Daishogun directional gods in Onmyodo who may also protect against disease. In fact, in Japan eight has long been considered a lucky number.

The Hachioji Gongen Yashiro was established in the Hachioji area in the early 10th century by a priest who had a mystic vision of Gozu Tenno and his eight children while undergoing spiritual training in nearby mountains. That is the origin of the Hachioji Shrine west of Tokyo ー which is now dedicated to Susanoo-no-Mikoto. In fact, there are Hachioji shrines throughout the country.

As noted earlier, before the Meiji Restoration there were once thousands of shrines dedicated to Gozu Tenno, and the cult of Gozu Tenno survives at some today. They are sometimes referred to as Tenno Jinja.


Before the Separation of Shrine-Temples

A good example is the Takedera in Saitama Prefecture. Although it is nominally a Buddhist temple, entry is through a giant miscanthus ring below a torii gate. The Takedera gives a good idea of what shrine-temples were like before the Meiji government forced the separation of the two religions.

A carved wooden statue of Gozu Tenno in the temple garden makes him look like a pot-bellied Viking with a slightly comical expression on his face.

Actually, the principal object of worship is another statue of Gozu Tenno, which is only put on display only once every twelve years during the Year of the Ox (ushidoshi). The Hiromine Jinja near Himeiji, said to have been built in the Nara period by immigrants from Silla, may have been the oldest temple dedicated to Gozu Tenno in Japan.

Then there is the Tsushima Shrine in Aichi Prefecture, which was once in a region that formed the base of the Oda clan of samurai during the Sengoku period. In fact, the crest of the clan is the same as the emblem of the shrine.

Nobunaga — the man who feared neither god nor buddha and could massacre women and children without batting an eye — was a dedicated devotee of Gozu Tenno, and greatly favored the shrine. It is said to have been founded in the year 540.

The Tsushima Cult based there worships Gozu Tenno and stands at the apex of a network of some 3,000 shrines dedicated to the ox-head deity.

In short, the Gozu Tenno cult appears to be a uniquely Japanese mix of various influences coming from India, China and Korea, together with Japanese folk beliefs. Everything is so mixed up that it is hard to tell what came from where, or when. In some ways, that is very typical of Japanese religion.

Importantly, the role of this ox-head deity in Japanese popular religion is not entirely a thing of the past. Gozu Tenno is alluded to in place names as well, such as the Tennoz (aka. Tennozu) Isle in Shinagawa Ward, Tokyo.

Next:  The Gion Matsuri: Enigma of the Kuze Komagata Chigo