VIDEO: Fuji Rock 2022 and COVID-19, Man on the Street Interviews 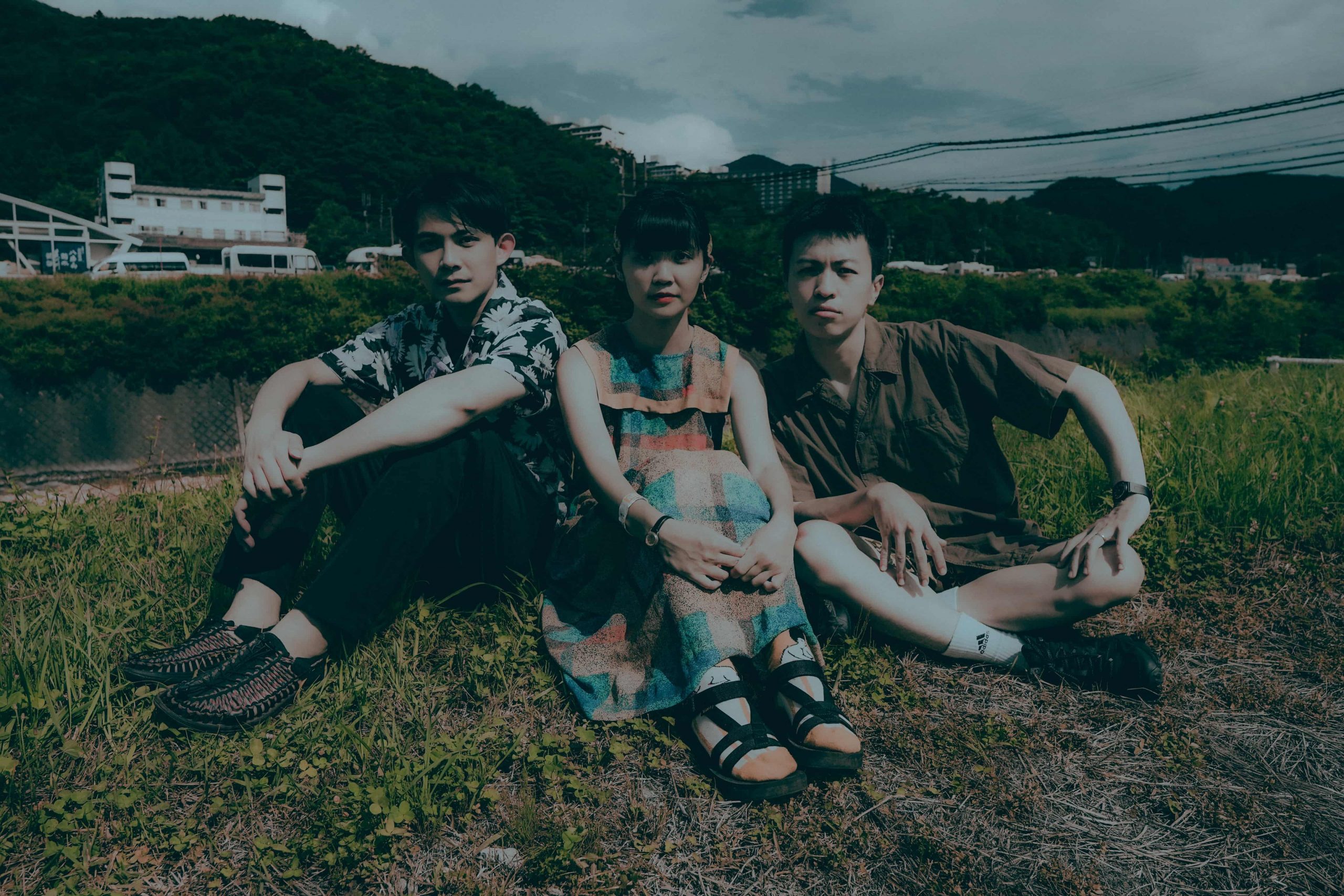 Elephant Gym sit down for an interview with JAPAN Forward on July 30. Photo Micah Go/JAPAN Forward.

Elephant Gym is a three-piece band from Kaohsiung, Taiwan, formed in 2012 by siblings Tell Chang (guitar) and KT Chang (bass) along with their friend Chia-Chin Tu (drums). Playing a rhythmically complex style of music known as math rock, these immensely talented musicians have diversified their sound over the years, with their 2022 album Dreams freshly infused with jazz and classical elements. They are currently even scoring a musical, which will open in Taiwan in 2023.

Elephant Gym quickly found a following, touring around the world and making frequent visits to Japan. In fact, the last overseas country they played in before the COVID-19 pandemic was Japan, and in the weekend of July they were finally back again — for their first ever performance at the Fuji Rock Festival. It’s just as well, because, as KT Chang tells us, “I had been learning Japanese before, but the pandemic made it hard to feel motivated to continue.” She has a reason now.

Their deeply immersive set on the Red Marquee stage featured nuance and power in equal measure, with thick and complex basslines, guitar lines that quickly changed from small and fragile to distorted and aggressive, and kinetic drum patterns that drew as much from jazz as from math rock. A guest spot from Japanese band Chilldspot’s vocalist Hiyune gave the audience lyrics to enjoy in their own tongue, while the addition of a brass quartet for the last few songs brought classic jazz arrangements and heart-lifting flute melodies that flitted like birds over the audience.

We caught up with Elephant Gym on the second day of the Fuji Rock 2022, the day before their Red Marquee set, to find a group of extremely friendly and thoughtful musicians.

Read on for an excerpt from our conversation with Elephant Gym, from the equations at the heart of math rock and the band members’ approach to evolving their music, to their feelings of hope for global unity despite Taiwan’s problems on the world stage.

How are you enjoying Fuji Rock so far?

Tell Chang: We arrived early, so we went to see lots of bands on the first day. Bands like Original Love and Hiatus Kaiyote. I think the music scene in Japan is very mature. Like, you can see musicians in their 60s and 70s playing, and younger kids will go to see them. In Taiwan, the indie music scene is really only for people in their teens and 20s, so it’s great to see people still respect elder musicians here — it’s very inspiring.

KT Chang: I was having so much fun at the festival, I lost my phone yesterday. I lose things all the time, so this is normal for me. But it’s OK, I was planning to upgrade my phone this year anyway. So Fuji Rock makes things happen!

Chia-Chin Tu: During our set we will have a special guest. We have a Japanese version of our song ‘Shadow’ with a guest singer from Japan called Hiyune, from a band called Chilldspot. [The album version of “Shadow” is sung in Mandarin.] We’ve worked with a lot of Japanese musicians over the years, so it’s great to have the opportunity to perform together at Fuji Rock.

Chia-Chin Tu: We have a local manager in Japan, and he recommends new artists to collaborate on songs with us. It’s really helpful — without him we couldn’t do anything.

KT Chang: It was our dream and also his dream to play at Fuji Rock someday. When we last toured Japan in January 2020, he invited the Fuji Rock organizers to see our show. He was like, “You have to put on a great show or else they won’t invite us to play at Fuji Rock.” Finally it worked out.

Your latest album, Dreams, is an evolution of your sound so far, crossing many genre boundaries from math rock to jazz. What was your intention with that?

Chia-Chin Tu: We have a democratic system that is really important to us. We put a lot of time into ensuring that each band member has their say in our music.

Tell Chang: Each member will be like the producer for different members’ songs, so that everyone can fulfill their dreams or their goals.

KT Chang: If you hear a song filled with bass, that’s probably my song!

So if Dreams is the first step in that evolution, is there some destination that you have in mind for the future?

Tell Chang: I want to be able to create art throughout my lifetime, even if it’s not always as Elephant Gym. But I think that, like, if I can understand more about art, then it means that I can understand more about people, or the inner side of the mind. I want to find ways to cross over with different cultures for more diversity, regardless of language barriers, as one people. That’s the true meaning of diversity and democracy. So that’s my feeling about creating art.

KT Chang: I just want to keep making my bass-playing more interesting for our listeners. I like to practice new skills, and when I want to change something about the way I play, the other band members accept the challenge. That’s important to me.

A lot of your music is instrumental, but you do often release songs with vocals in different languages, from Mandarin to Japanese to English. How do you select which language will work for which song, and is this an extension of your intention to make more culturally diverse music?

Tell Chang: We like to collect languages! It’s a great way to work with other artists or singers we admire, so we’ll reach out and try to contact them.

KT Chang: Having multiple languages in our music means we can reach a wider audience around the world, not just in Taiwan, which has a very small indie music scene. That means we get to have fans in different countries, and we can communicate with more than just our Taiwanese audience. When we perform in Japan, we can perform our Japanese songs, and so on. Sometimes we make both, like a Japanese version and a Mandarin version. We do it all.

What advice would you give to a young band starting out?

Chia-Chin Tu: As a drummer, I’d say listen to the notes carefully. If you want to become a professional musician, you need to listen to all the notes of all the instruments.

KT Chang: Try messing around with different time signatures, like 5/4 or 7/4. Of all the “weird” time signatures, those ones are relatively simple to understand. Compose a riff in 5/4 or 7/4 that can be looped, and then you have the basic foundation of a math rock song.


You mean don’t be too controlling?

Chia-Chin Tu: I mean don’t be too boring! I always try to make my drumming more melodic.

Tell Chang: When we were starting out making math rock, we would listen to a band from Japan called toe. Their songs have many regular time signatures, like 4/4, but secretly, one guitar player will count on four while the other counts on three or five. And then it becomes math rock.

KT Chang: You can even do it with 4/4. Like, one person can play 2+2 and the other can play 3+1, and it will sound a little bit weird but it will make sense.

Tell Chang: Sorry, this is getting a little bit nerdy!

Japan has a very rich math rock scene, with bands like toe, LITE, tricot and more. Has it been helpful to have bands like that fostering an audience here in Japan, who are then likely to also enjoy your music?

KT Chang: It has been helpful. We just toured the United States with LITE. It’s useful to have friends like that in Japan even though we are from Taiwan.

Tell Chang: We are all on the same label in the US — Topshelf Records. So it’s very easy for us to meet those bands. It’s like a little community. And any time those bands come to Taiwan, they always ask us to open for them.


That’s a good position to be in! Before we let you go, do you have a message for your fans?

Tell Chang: I think there are complicated relationships between different countries. But we can all resonate together in music. There are connections between all humans and the Earth, so trust in the resonance between us, and don’t allow war and political strategy keep us from connecting. Don’t be enemies; be friends.