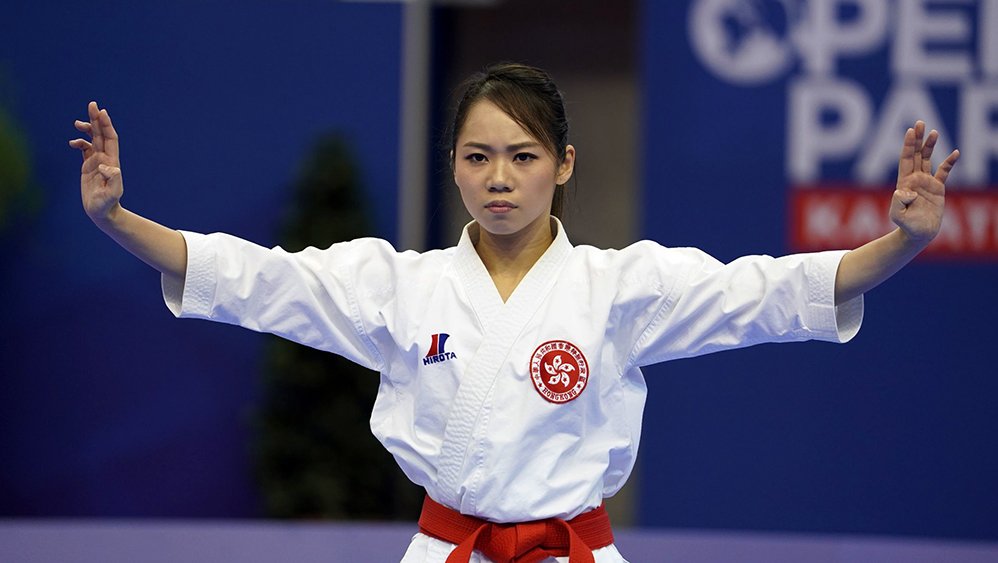 Grace Lau Mo-sheung, 29, from Hong Kong, when doing a press event on July 16, was clear that she was not messing around in preparing for the Olympic Games.

Ranked fourth in the world, with an extroverted and bubbly personality, she is a karate athlete in women’s kata. She was the first athlete from Hong Kong to win a medal in the sport, in her case bronze at the World Championships in Madrid, Spain, in 2018. In the same year, she won a bronze medal in the Asian Games, narrowly losing against Japan’s Kiyo Shimizu, ranked second worldwide.

The discipline of karate is divided into two forms. Kata, the first, involves performing defensive and offensive moves in front of a panel of judges. Kumite, the second, is the classic match between two athletes fighting each other, and what many of us have in mind when thinking of karate as a martial art.

Tuning in from her training camp in Miami, Florida, Lau explained how in her first Olympic appearance she is aiming to snatch one of four medals (karate has two bronze medals), out of a pool of the ten most competitive kata athletes in the world.

The Hong Kong head coach, William Thomas, told the press that they had requested Lau receive the menu at the Olympic Village, so that she can already start adjusting her diet, helping to ensure there are no distractions during the Olympic period.

Thomas showed confidence in Lau’s ability as an athlete, commenting in his opening remarks: “Grace is the full package, they are not going to see the same athlete they saw 12 months ago. She has a strong technical element to her game.”

Lau is known also to experiment with new training techniques, including the Gyrotonic Method, invented by a Hungarian dancer, to increase flexibility, movement and injury recovery.

Thomas, 55, is from the U.K. He himself is a former karate athlete in the discipline of kumite, with several medals to his credit from the World Karate Championships, and his son Jordan Thomas is an Olympic athlete representing the U.K., also in karate kumite.

We caught up with both Grace Lau and William Thomas to hear what they had to say about the impending Games where karate is set to take center stage, and their thoughts on preparing for the competition. Excerpts of the interview follow.


What was your reaction when you found out that Tokyo 2020 was going to feature karate?

Grace: I was very happy and excited because I remembered how the World Karate Federation had been promoted for a few years, and finally we got the sport in the Olympics. The feeling was “YES! We did it!”

At that moment, however, I wasn’t thinking if I would qualify as it was still a few years ago, I still hadn’t won my world championship medal, I was trying to do my best at every competition and see what happened.

When I got the world [championship] medal, I realized that I might have a chance. I was training hard, doing my best in competitions, and now I am here. I am very proud to say that I am an Olympian!


Do you have a message to young fans, and people approaching the sport?

Grace: I got so many text messages from children and friends in Japan who asked me to do a seminar after the competition. They said, “You are so amazing, you are competing in the Olympics, you have this opportunity!”

I can’t make it this time, which I am really sorry for,  as I was really hoping I could attend [the seminar], but it’s not possible because of COVID. I want to tell everyone that I hope that I can see them soon. With my Olympic medal, I will keep training hard and one day perhaps we can meet each other in a competition!

What are you preparing in this final stage of training?

Grace: The most important thing is my head. I’m always a person focused on small details, I want to be perfect. That means that sometimes I don’t accept myself as someone who is imperfect.

Therefore, I am trying to focus on the fact of doing the best I can during a given day. Maybe what I did today was not as good as yesterday, but I accept that it’s the best I can do today. One needs to move on, because tomorrow might be better. Technically I am ready, but in my head, I have to accept when things don’t go as planned.


As a kata coach, what do you bring from your experience as an athlete?

William: I was taught traditionally. I do have a strong understanding of karate. Being an international athlete, I was always fortunate to watch the best in the world, consistently over a period of 14 years.

My experiences as an athlete that transfer to my coaching, rather than the physical side, are more the lessons that I have learned: dealing with failure, but also dealing with success, coping under stress.

It’s about really getting and keeping the athletes motivated, and being aware of my body language as a coach, as it can reflect on them. In essence it’s making sure that they are cool under pressure.

I’m also bringing my experience of peaking [performance] for events, and how to approach the big day.


Grace was stranded for eight months abroad during COVID, and you previously said “all she did was eat, sleep and train.” What were some of the challenges of training remotely?

William: It was an unprecedented time and there was no manual to follow. The only thing that you can follow is the principles.

We monitored Grace’s coaching environment, a small group which is a really good, positive environment for her. We would make sure that she had guidance, not only for the physical, technical and tactical side, but also the social aspect for her mental health, a key aspect for many during the pandemic.

The biggest challenge was thinking about psychology, making sure that I’m speaking with the coaches out there, that I’m touching base with Grace so that anything that is flagged up we manage early.

The actual training and the karate were the easy part, that’s the time when you can train and forget everything else.

William: In those early times when I came, I had to rely on my coaching principles, which apply to everybody. Then you have to get to know each athlete ー what motivates them, and how they respond under pressure.

Their motivations could include study, as a lot of athletes also study. They could have a career, they could be driven by ambition. Knowing this makes it easier for me to communicate with the person, as opposed to just looking at them as a collective cultural body.

Getting to know the individual characters is what enabled me to progress into the fold, and really establish myself as the head coach here in Hong Kong.


With karate featured in the Olympics for the first time, what are you hoping this will achieve for newcomers to this sport?

William: I’m hoping that it does actually get karate out there and increase the participation. Here in Hong Kong, they’re going to see Grace on television, and hopefully everybody can say “oh I want to do that, where can I do that?”

I’m sure that the same story is going to be reflected around the world. Once people see it, it gets that exposure, for sure I think that participation will increase. That would make it collectively better for karate as a whole.


Do you have a message for Japanese fans?

William: We’re looking forward to going to Japan. Unfortunately, we’re not going to be able to travel and see and experience the culture in Japan, which is a great shame. It would have been great to have the local crowd, so it is disappointing that we’re not going to have the full experience that the hosts wanted us to have. But we’re still looking forward to coming, and we’re going to make it a great event. We know that karate is a national sport and embedded in the Japanese community. We’re going to go out there, and we’re going to showcase this to the world.