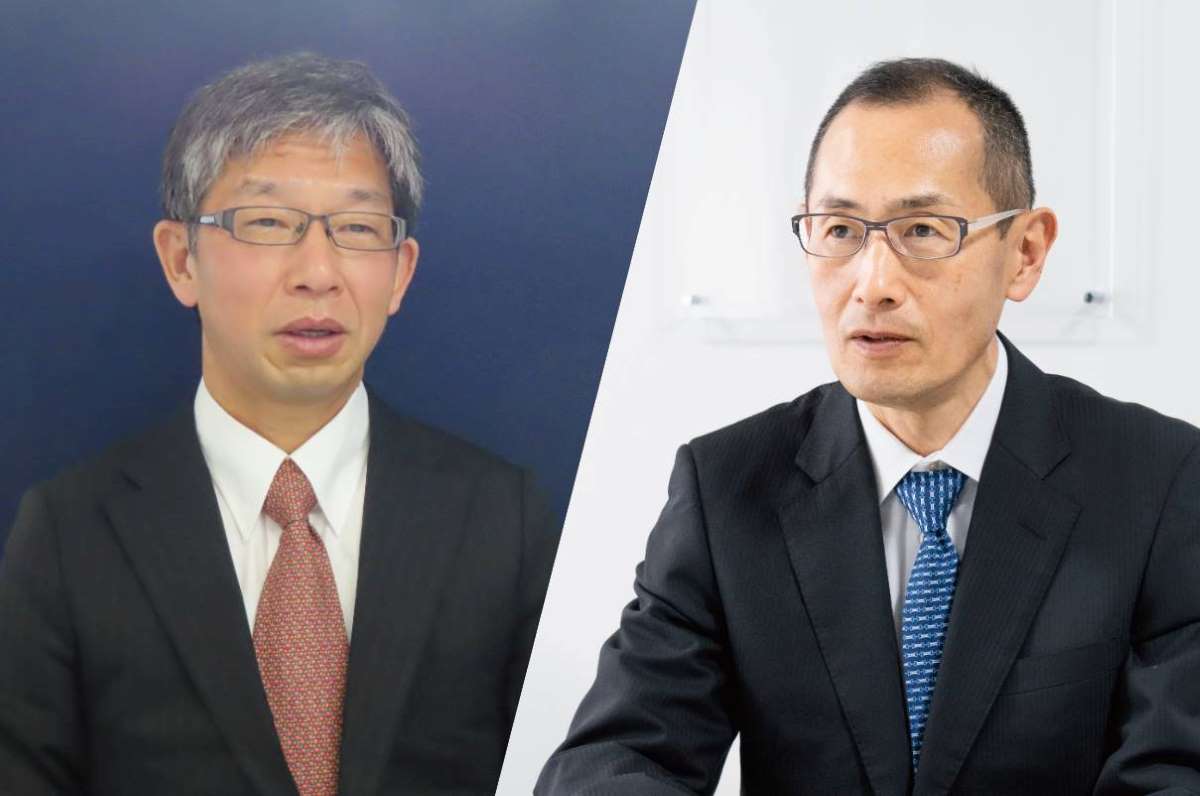 Induced pluripotent (iPS) stem cells have drastically changed medical research. Because they can be transformed into cells from various tissues, they have been viewed in a wide range of fields, such as regenerative medicine and drug research.

At the end of March 2022, Dr. Shinya Yamanaka, winner of the 2012 Nobel Prize in Medicine and Physiology, retired from the position of director of the Center for iPS Cell Research and Application at Kyoto University (CiRA), the leading iPS cell research center in Japan. He was succeeded by Dr. Jun Takahashi, also of Kyoto University.

Why change the director at this time? Furthermore, what is the current status of iPS cells, the issues surrounding them, and the outlook for the future? The Sankei Shimbun asked both directors in an interview.

How does it feel as you retire from serving 12 years as director of CiRA?

For me, it’s probably one of the biggest decisions of my life. However, unlike when the center was established, and I was the only professor, the younger generation from that time have become the world’s leading researchers and now.

Many are picking up the baton. This is a joy that exceeds my expectations, and I am very happy to be able to pass the baton with peace of mind.

What is the reason for the change?

iPS cells have finally developed from clinical trials to the stage of practical application. Therefore, rather than continuing with me, a student of the fundamental and basic research, I thought it was appropriate to have people like Professor Jun Takahashi (successor as director), who is aiming for clinical application on his own, to pull the institute forward.

I would like Professor Takahashi to build the iPS cell research center in his own way.

What’s next for you?

As the chairman of the iPS Cell Research Foundation, which was established two years ago, I will continue to play a role as a liaison to companies in iPS cell technology.

There is also the fact that I want to continue doing the pure research that I wasn’t able to do as the director. I’m happy to have more time for research, but I’m also keenly aware that rehabilitation (to regain my senses) is necessary.


Why will the president remain while the director is retiring?

The research institute has received a great deal of support through taxes and donations. I believe this exhibits strong expectations for iPS cells.

In the future, cooperation with companies will be crucial. And I thought that it was critical for the president to continue to fulfill those responsibilities as the bridge between the foundation and the companies.

What is the biggest challenge towards practical application?

It’s funding. Research happens over a long period of time, and the closer you get to the goal, the more funding you need.

There are still more than 10 projects in the clinical stage, but the real challenge is ahead. From now on, companies will be the main players. But it depends on whether the funds will continue, and the foundation will support research as much as possible.

What kind of research will you conduct in the future?

A gene I discovered while studying in the United States about 15 years ago seems to be involved in the root of life phenomena, but the bigger picture is unclear. I would like to use iPS cells as a tool to clarify it.

Additionally, there have been a series of reports that the genes used to make iPS cells are rejuvenated by shortening the working period. I have a strong interest in this, and I would like to investigate it further.

What is the goal of iPS research?

Practical application may be one goal, but there is no end to pure research. And there is no final goal because new findings come out one after another.

In that sense, the research will continue steadily. Hopefully I will be able to pursue that in my remaining research life and connect it to the next generation.


Incoming Director Dr. Jun Takahashi: ‘Advancing to the Next Stage with Quality Improvements’

What are you thinking about as you step into the role of director?

Since I have been an assistant to Professor Yamanaka as a deputy director, I don’t have to worry about sudden changes. However, I think there will be more work involving external communication.

Is there anything you would like to say to Dr. Yamanaka?

It was a unique, Nobel-Prize-winning career. I think it was difficult because he not only was director of the center, but also founded, led, and nurtured iPS research itself.

Most of all, I would like to say thank you for your hard work. I would like Professor Yamanaka to relieve himself of some of the burden and have a chance to focus on his research.

And I am very much looking forward to seeing the many young people who will be inspired by him.

How do you plan to lead the center?

Because I was here with Professor Yamanaka when the institute started from scratch, I understand its role well. Our general principle of making iPS cell technology available for the world and for people will not change as I take on the role of director.

When this institute was established, clinical implementation of iPS cells was the most important issue. But this has been achieved.

In the future, we are considering both vertical and horizontal development. Vertical development means improving iPS cells for clinical use. It is a linear effort to make even better cells. Our institute will lead with cutting-edge technology.

Horizontal development is the expansion of clinical practice. I myself transplanted iPS cell-derived nerve cells into patients with Parkinson’s disease. But clinical practice has also been achieved for eye, heart, and blood diseases.

We want to expand these applications. Working with various research institutes, we hope to expand use and ultimately make it available even at a typical hospital.

How has the operation of the institute been so far?

We have fulfilled our first mission of clinical realization, and our facilities and personnel have steadily improved. Well, I think we earned a passing score. Dr. Yamanaka succeeded in the lift-off, and we are now in steady flight.

The decade of financial support from the government will end this year. In that sense, our physical expansion will end and we will move on to the next stage of further qualitative improvement.

How will you utilize your unique experience?

Professor Yamanaka is a researcher. And I am a clinician who has been a brain surgeon for 20 years. I know concretely the strategies for practical application of treatment, and how to interact with companies and regulatory agencies. By making the most of these strengths, I can take advantage of my experiences.

There are many things to do and it seems to be a lot of hard work.

There is no choice but to do it. Researchers and directors are the same in terms of social contribution. We hope to be useful to the world by developing new treatment methods and creating an energetic research environment for young people.

The History and Future of iPS Cells

iPS cells, first developed in 2006, are produced by introducing a special gene into cells collected from the skin or blood of an organism and “initializing” it into a fertilized egg-like state that can change and grow into various cells.

What is expected is regenerative medicine that transplants cells and tissues made from iPS cells into the affected area and treats them. The government provided support on the order of about ￥110 billion JPY ($845 million USD) in the 10-year-period from 2013 to 2022.

Since 2014, clinical application studies have been conducted for various ailments such as eye diseases, Parkinson’s disease, heart failure, cancer, and spinal cord injuries.

Most of the iPS cells used in the research are provided by the Center for iPS Cell Research and Application at Kyoto University, which produces and stockpiles them. The project was transferred in 2020 to the iPS CiRA Foundation, also at Kyoto University, and now also provides the cells overseas.

In addition, researchers are reproducing diseases with iPS cells made from cells of patients with intractable diseases such as amyotrophic lateral sclerosis (ALS) to develop and test the effects of various drugs.

The biggest challenge to commercialization is cost. According to the foundation, it costs about ￥40 million JPY ($307,000 USD) to collect human blood and make iPS cells.When converted into various cells for transplantation, it costs ￥60 to ￥100 million JPY (around $460,000 to 760,000 USD) for just one person.

The foundation hopes to improve the efficiency of manufacturing and reduce the cost of production to about ￥3 million JPY ($23,000 USD).

Dr. Shinya Yamanaka graduated from Kobe University School of Medicine in 1987 and the Graduate School of Osaka City University in 1993. The Osaka Prefecture native, born in 1962, became professor at Kyoto University in 2004, before starting as a senior researcher at the Gladstone Institutes in the United States in 2007. In 2010, he became Director of iPS Cell Research Institute, Kyoto University. In 2020, he was the chairman of the iPS Cell Research Foundation of the same university. He received the Order of Culture and the Nobel Prize in Physiology or Medicine in 2012.