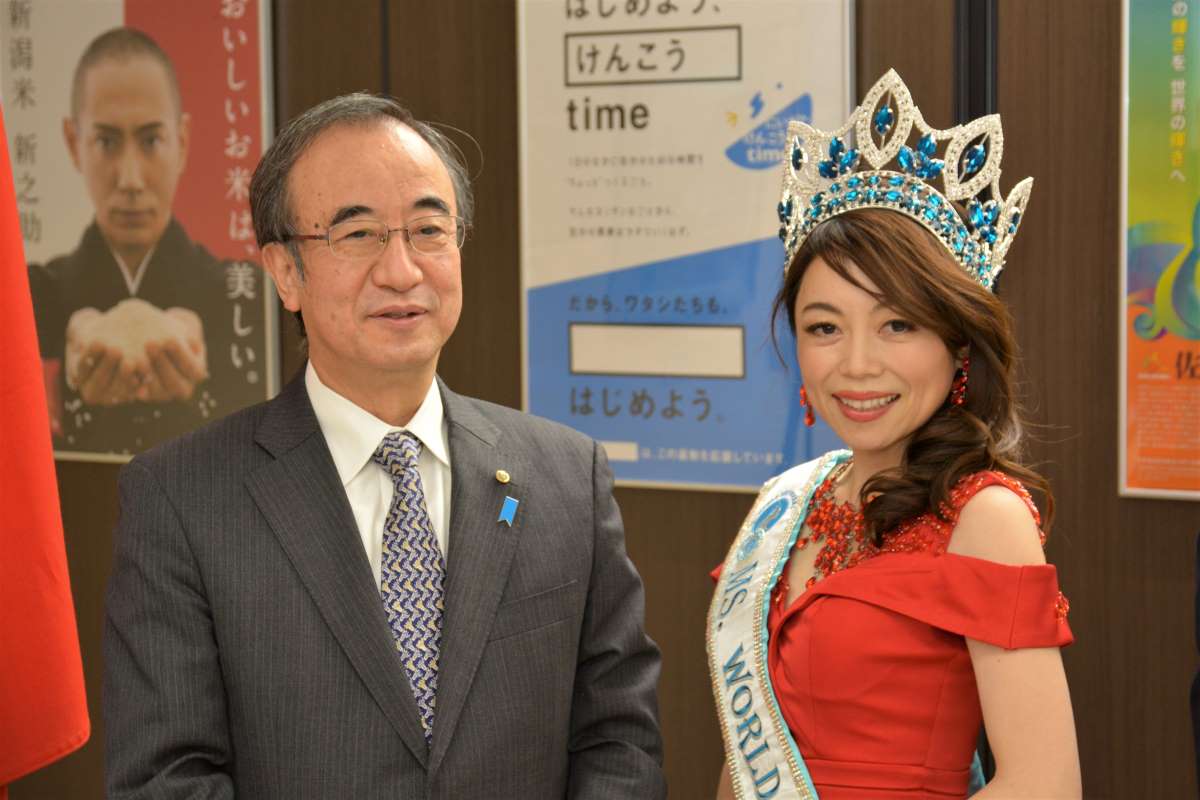 Asuka Kobayashi, a dental hygienist living in Niigata City won the first Japanese Grand Prix at the Ms World Universal competition, a contest to celebrate women who challenge themselves to make social contributions. Next to her is Governor Hideyo Hanazumi of Niigata Prefecture. (Photo by Kenichi Honda)

Asuka Kobayashi, a 40 year old dental hygienist from Niigata City, was crowned as the first Japanese to win the 2021 grand prize at the Ms. World Universal contest celebrating women’s accomplishments in the area of social contribution. In February 2022, Kobayashi even made an appearance at New York Fashion Week. We asked her about her journey from being an everyday mother-of-three to making it to the big stages.

Please tell us about your path to the championship.

Besides working as a dental hygienist at a dental clinic, I hold seminars as a counseling psychologist and provide support for mothers with parenting concerns. It all started last January (2021), when a friend who had been watching my career suggested that I enter a contest that focused on women’s contributions to society.

At the Japan Championship in May of 2021, I came in first place in the online popularity vote and also received a special award. That September, as a representative of Japan, I participated in the Ms. World Universal competition, which was held in the state of Virginia in the United States.

Since contestants bore the cost for such things as travel, lodging, and dresses, I raised the money through crowdfunding and collected approximately ￥2.3 million JPY ($18,800 USD), which was double my target amount. Taking to heart the thoughts of those who entrusted me with their dreams and hopes, I flew to the US.


What was it like to be at the competition?

At the world championship, I was pre-interviewed in English by six judges and was also judged on my “pageant walk,” wearing a dress. When my name was called as the grand prize winner, I was overwhelmed with joy for having been able to make all my supporters’ dreams come true. As well, I had the thought, “Wow, dreams do come true,” racing through my mind.

This year in February, I walked the runway during a show at New York’s Fashion Week. I was exhilarated by a world I have never seen before unveiling itself before my eyes.

What inspired you to take on the challenge?

Actually, the reason I challenged myself to such a big dream is because of a rare disease that my eldest son has. My son has an incurable brain disease that prevents him from even being able to sit up. Even with the illness, my son has fought hard to live.

Watching him made me want to become a parent that can believe in my child’s future. So, I studied psychology and became a psychotherapist. Then I started providing counseling on child-rearing issues. That is what led me to win this grand prize.

What advice do you have for other parents?

This is the message I send out to mothers who are struggling with raising their children. If you want your children to have dreams, you need to have your own dreams as well.

Children grow up watching the adults around them. Seeing their mothers lead happy lives becomes a valuable asset in the children’s futures.

Currently residing in Niigata City, Asuka Kobayashi is from Murakami City, Niigata Prefecture. While she works as a dental hygienist engaging in the prevention of dental problems and oral diseases, she also provides support for mothers raising young children as a psychotherapist. Her book, Kodomo-mo Jibun-mo Aisenakatta Watashi-e (published by Discover 21, 2020, in Japanese),has been ranked #1 in Amazon’s Best Seller in Books.