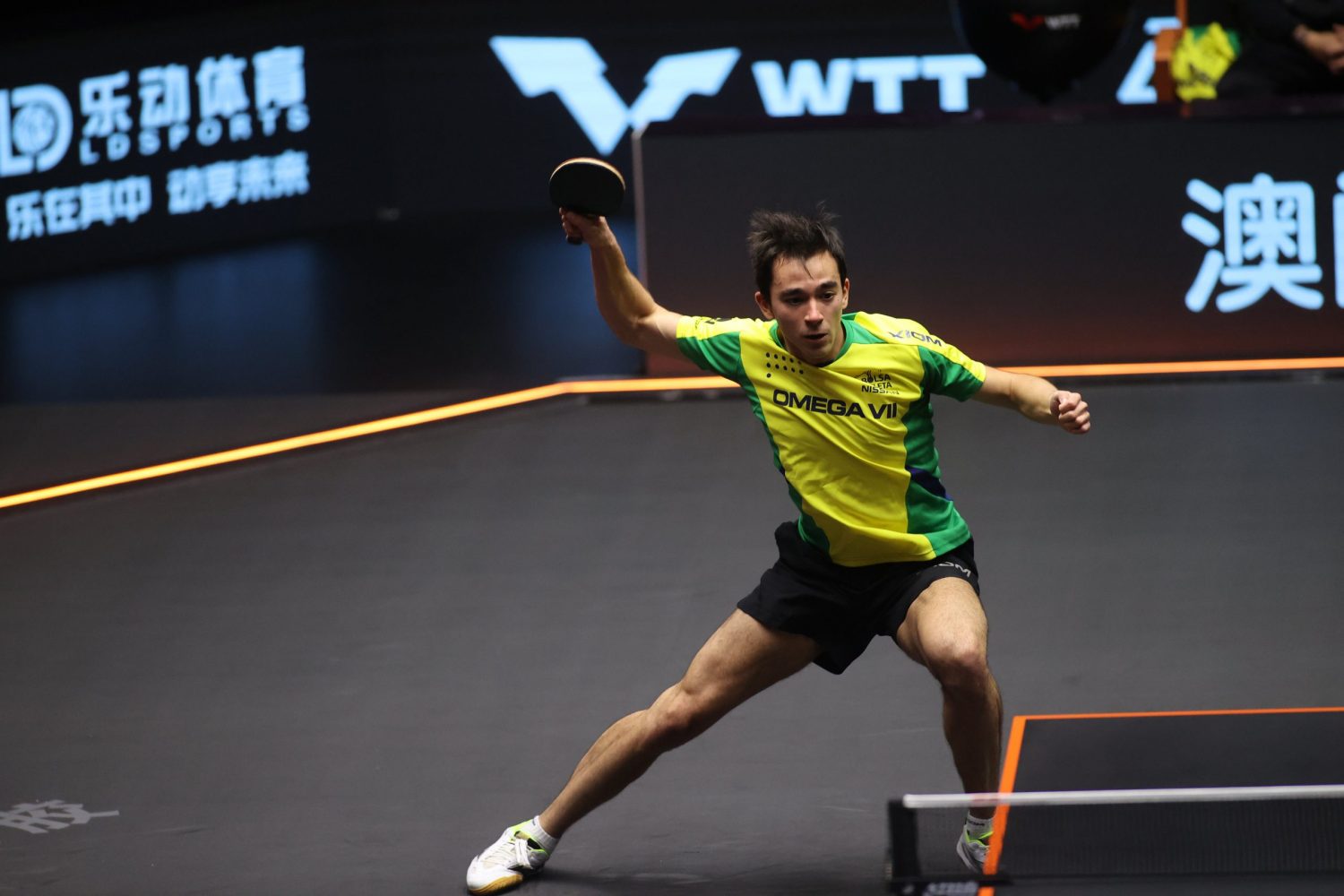 Although many people perhaps only know the sport as ping pong, table tennis is one of the 33 sports that are taking place during the Tokyo Olympics, with 172 players competing in the singles, doubles, and team events.

The 25-year-old Calderano is currently ranked No. 7 in the world, and will be representing Brazil in the Olympics in the singles and team events.

As an athlete, he has won numerous medals in international championships, including several gold medals in the Pan American Games, and competed in the 2016 Olympics in his hometown of Rio de Janeiro.

In an interview with JAPAN Forward, he discussed his goals and motivations for the Tokyo Olympics.

What are your goals for the Olympics?

My goal of course is to fight for a medal. I think the Chinese players are the big favorites in table tennis, but there are also other very strong players, maybe 10 other players, who can also fight for medals, and of course that’s my goal.

What does it mean for you to be competing now, during the pandemic?

How has the uncertainty affected your training or how you are approaching the Games?

I think mostly the mental part is not so easy, you have a lot of quarantine periods. I had maybe three or four quarantines, which I had to stay at home for, and I wasn’t able to practice really well. So, it affected me a little bit, especially the mental part, and also not being able to be with my family for a very long time.

How do you face the mental challenges?

I do a lot of visualization. I’m not working with a mental coach now, but I’ve been with one in the past. Unfortunately he passed away a few years ago, but I still have some tools that I can use that he gave me, and I think I’m well prepared mentally.

That’s always been one of my strengths, so I’m confident I’ll be able to perform and be well prepared mentally in the Olympics.

How do you motivate yourself in preparation for the Olympics?

I think once you’re competing in the Olympics, that’s the thing you want the most, so I don’t need any extra things to motivate me. I just have to stay healthy, stay prepared, and hope for the best.

Do you have any heroes that you aspire to be like?

There are many athletes that I admire, but I wouldn’t say I would like to become like any of them. I just want to be the best version of myself and improve every day.

I think I also have many things to give to the sport, but I can get inspiration from many different athletes. And I love sports, so I take many things from different kinds of athletes. I try to observe a lot to learn a lot from the others.

How did you get your start in table tennis?

I started just playing ping pong for fun with my father in Brazil. He wasn’t a table tennis player or anything, but he’s a PE [physical education] teacher, so he knows a lot about sports, and I was just having fun playing a bit of ping pong. I had some talent for the sport, so he took me to a club to start practicing and I enjoyed it.

What did you learn from competing in the 2016 Olympics?

I think it was a great experience playing in Rio. Especially with the Olympics being in my hometown, it was the best experience of my life.

I think I’ve learned a lot from this, you don’t have to put it in words. Just the experience teaches you, so this being my second Olympic Games I will be better. I’m also better in the world rankings. I’m a better athlete, more mature. It will be good for me to have already played the Rio Olympics, and I hope to be able to use the experience in Tokyo.

How will your experience in Germany compare to your next phase in Russia?

Now, playing in Russia, I’ll continue to live in Germany, so that won’t change so much for me regarding my life and my practice. I’ll be in the same training center, but now I’ll play the Champions League, so it’s also a big goal.

The team is very competitive, very strong. There are three players in the top 10 in the world, so it’s a great team. I’ll also have more time to invest in my practice and my international tournaments so it’s going to be good.

What did you learn from your team in Germany?

I’ve played with many different players and coaches, so I think you can learn a bit from each one of them. I think you can improve a lot with time and experience, especially if you are able to pay attention to the small decisions and be humble enough to also learn from the others.

Is there anything about Japan that you’re interested in?

When I think about Japan, I think about organization. Everyone’s so organized, so polite, everything’s so clean. That’s one of the reasons why I love the country. I also like the sound of the Japanese language, but I can’t speak Japanese. But there are many things about the Japanese culture that I like.

I think I won’t have the possibility, I’ll just have to be practicing and stay at the hotel in the village. I’ll just be focusing on the competition. I’ve been to Japan a few times, so I know the country well, even if I haven’t had the time to visit it so much because we’re always so busy. But, I’ll just enjoy the tournament.

In the realm of the possible, is there anything you want to do?

I think sports are one of my biggest specials, so I would love to maybe watch the track and field events, or the USA basketball team. I guess that won’t be possible, but it’s something I’d love to do.

Do you have any message for your fans in Japan?

I’d just like to thank everyone for welcoming us in this hard time. I know it’s not easy to accept so many people coming into your country, but I think we’re taking all the possible measures to be able to arrive there safely. We’re taking so many tests, and I think everything is going to be safe. I just hope for a safe Olympic Games.

Find out more about the Brazil National Olympic Committee here, and more about table tennis in the Tokyo Olympics here.