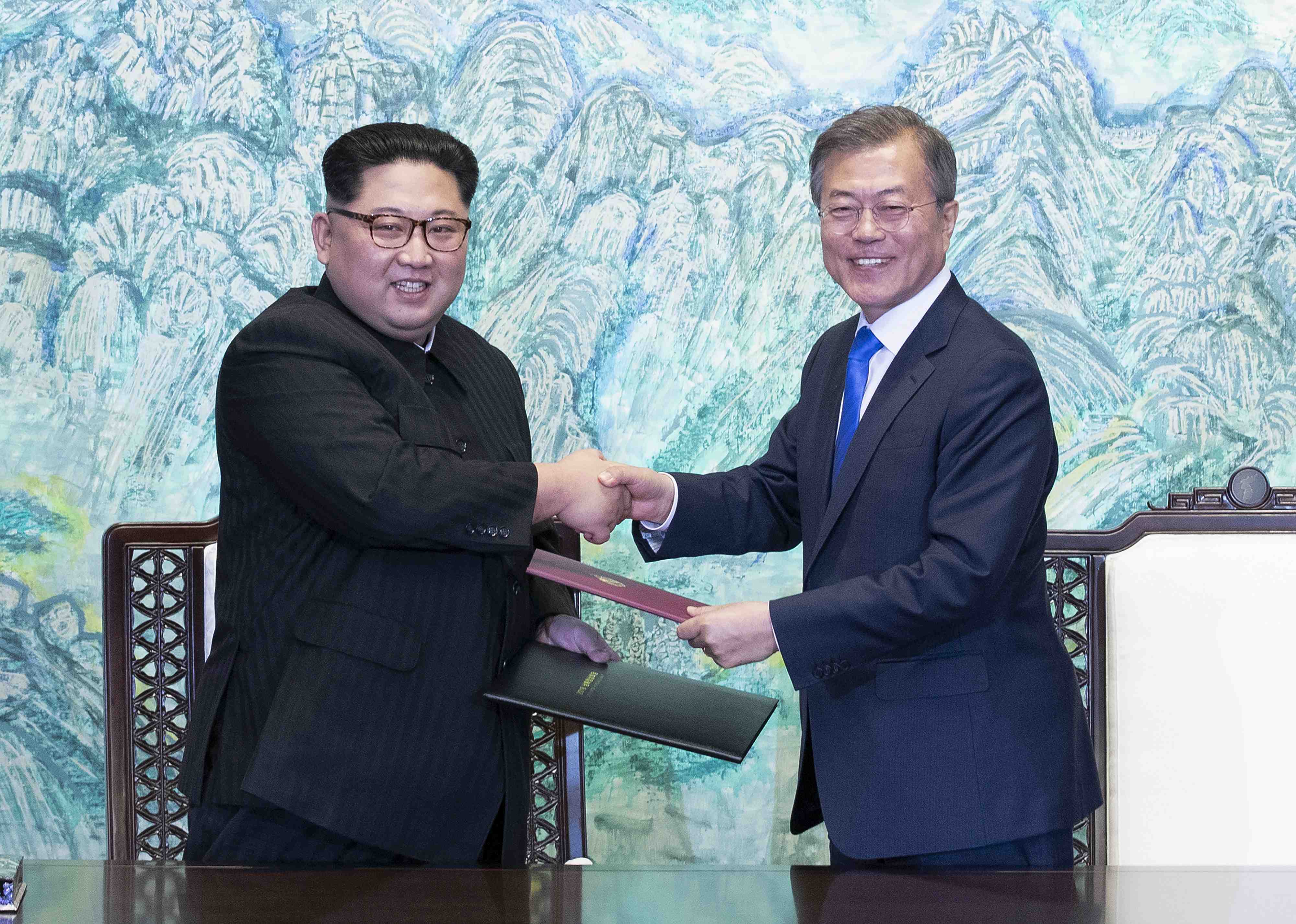 Moon said that he found Kim “very honest…very enthusiastic [and] one with strong determination” and who has “a good idea of what is going on around the world,” according to an interview which is published in the current [July 5 / July 12] edition of Time magazine.

It was not the first time Mr. Moon used such friendly rhetoric about the dictator from the North. During a press conference in January, Moon stated that Kim “has a clear will for peace, dialogue, and denuclearization.”

The praise was followed by a significant caveat, though. Dialogue aimed at reducing the threat from North Korea would only start after the United States gives Kim’s regime a “security guarantee” and works towards “normalization of relations.”

I have read carefully through the Time magazine piece. It was well-researched and revealing, yet it contains a number of puzzling contradictions.

It presents President Moon as a peacemaker, who is making a “last push” for reconciliation with the North. The report also acknowledges that Mr. Moon is under pressure to create a legacy as he must leave office at the time of next year’s election, because of a single term limit on the country’s presidency.

However, at present, the diplomatic situation is a mess, with North Korea refusing to engage either with South Korea or with the United States. Its army has even used explosives to destroy a liaison building, built at Seoul’s considerable expense.

So what are we to make of the messages Mr. Moon sent to the world through his Time interview?

To help me understand, I turned to one of the United Kingdom’s leading scholars on North Korea, Dr. Edward Howell, a stipendiary lecturer in politics at New College, University of Oxford.

We started by pondering together Mr. Moon’s assertion that the North Koreans “strongly aspire for peace.” This struck me as a surprising claim, as North Korea’s leaders keep the country in constant readiness for conflict, and the North is still officially at war with its southern neighbor.

Dr. Howell acknowledged the situation is extremely tense but explained: “It is true that North Korea wants to sign a peace treaty with South Korea. It has called for a peace treaty to replace the armistice agreement which ended the Korean War, and sees that as the first step towards any form of reconciliation with the South.”

Dr Howell went on to say: “The big problem is what happens if North Korea does indeed sign a peace treaty. We’ve seen what it does with bits of paper; it does not follow through on agreements it has made. I believe it could use the offer of a peace agreement with South Korea as justification to try to get rid of the presence of U.S. troops on the peninsula.”

Next, we considered Mr. Moon’s appraisal of Kim Jong Un as a man who is “very honest…very enthusiastic [and] one with strong determination.”

Dr. Howell informed me that there had been a lively debate in South Korea about the translation of this phrase. Not everyone agrees that the English word “honest” best matches the Korean word the president used in the interview.

“After the article was published, the President’s office said that Moon used a word which meant honest, not truthful,” said Dr. Howell.

I remain confused by this. But when I read through the Time article again, I noticed that it included an assessment of Kim, which suggested he was neither honest, nor truthful.

The reporter Charlie Campbell wrote: “Chairman Kim brutally murdered his uncle and half-brother and — according to the historical report by the UN Commission of Inquiry in 2014 — he masterminded ‘crimes against humanity’ including massacre, tortures, and rapes and was responsible for a prolonged famine.”

Next, Dr. Howell and I looked at another surprising claim in the piece. Moon Jae In said that the North had “done everything possible to develop.”

Dr. Howell told me: “I think it’s possible to say that North Korea has aspired to develop, under the constraints of a very tight sanctions regime and existing low levels of economic development. Moon himself has sought to prioritize an approach of diplomacy over sanctions. Another reason that North Korea has not flourished economically has been the lack of inter-Korean economic projects, such as those offered by Moon.”

I put it to Dr. Howell that Moon’s words represented an extraordinarily optimistic interpretation of Kim’s intentions.

He replied: “If you listen to the rhetoric from Kim Jong Un, he has been saying since 2018 that the national focus should be on domestic economic development now that North Korea has become, in Kim’s view, a nuclear state. However, he hasn’t been able to materialize this. For example, construction on a major new hospital in Pyongyang has stalled.”

We finished by pondering the big question on the minds of diplomats. What could end the current stalemate and move us towards a more secure situation?

In the Time article, Mr. Moon suggests “a continuous cycle of denuclearization and sanctions relief” is the key to the next stage of the process. What does Dr. Howell think?

“I wonder if this cycle is continuous or never ending? Let’s look at the context here. This is a South Korean president nearing the end of his term. He was used as a mediator in the engagement between [U.S. President Donald] Trump and Kim. Kim used Moon to try and convince Trump to have high-level dialogue with him. This was when their so-called love letters were exchanged.

"But I believe that if denuclearization is used as a starting point for any talks involving North Korea, the talks will stall. What North Korea wants is specific sanctions lifted from its economy.

"Moon takes the view that we can't keep isolating North Korea. At some point one side is going to have to make a bold move — a fairly unpalatable move, you could say — either by easing some sanctions, or with North Korea offering some concessions on its nuclear facilities, even though they may not be big. The question could be, ‘Is there scope for small deals instead of a big deal?’”

I am a journalist and not a diplomat, so I am not qualified to answer that question. But I have of course noted the deceptive words which flow from North Korean propaganda. I wonder why President Moon does not challenge the lies.

North Korea’s threat to South Korea, Japan, and the world grows more dangerous by the day. Personally, I cannot accept that the initiative for peace will come from a capricious and deceptive dictator like Kim Jong Un.

Duncan Bartlett is a regular contributor to JAPAN Forward and is a research associate at the SOAS China Institute, University of London. He is currently teaching diplomacy and international relations on The Economist Executive Education course, A New Global Order.