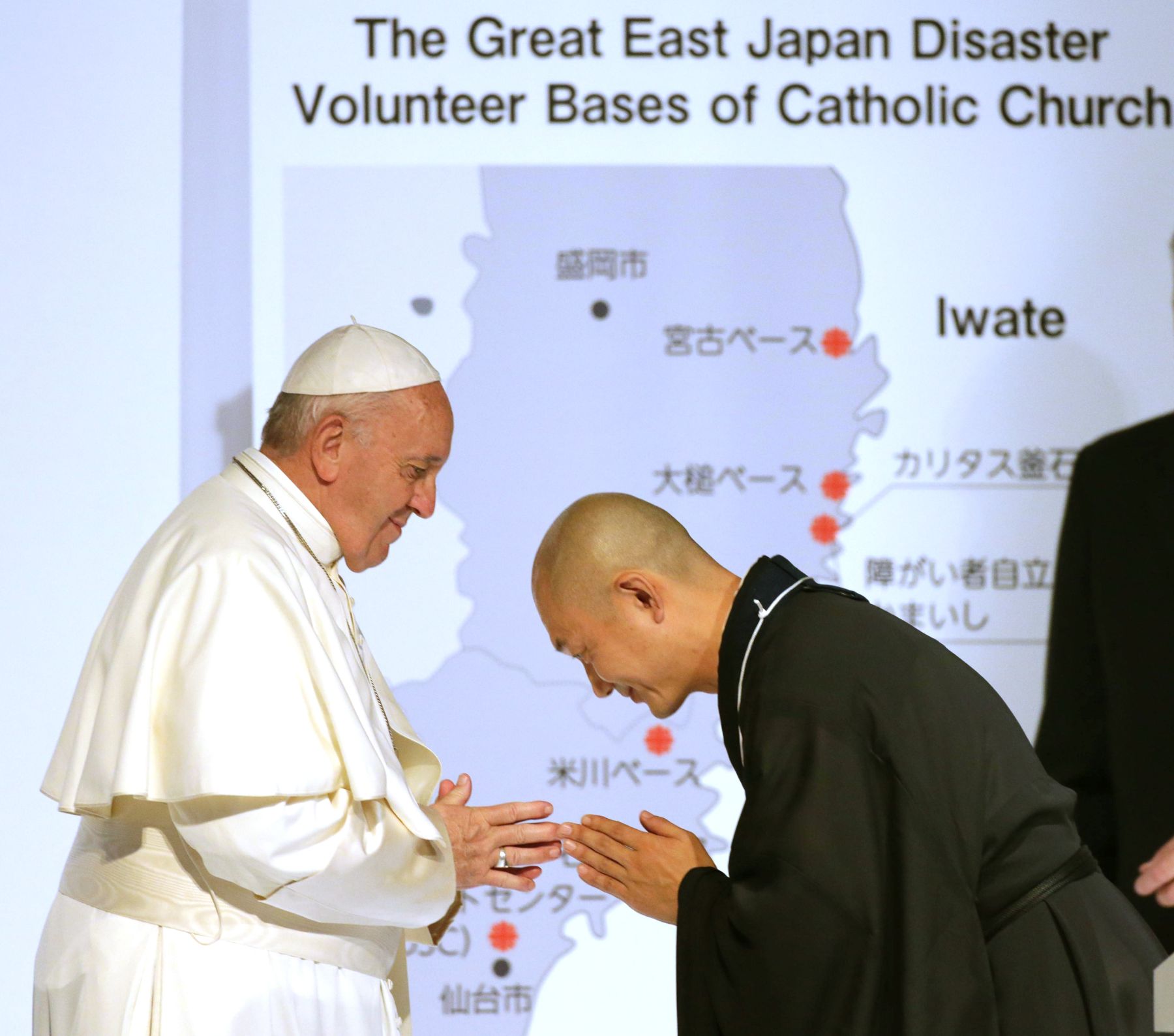 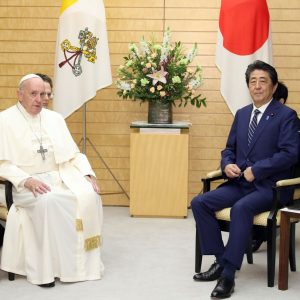 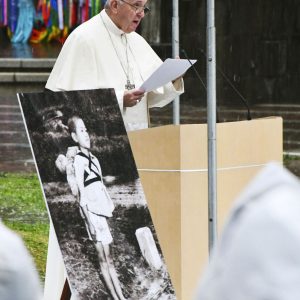 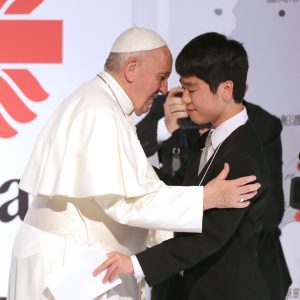 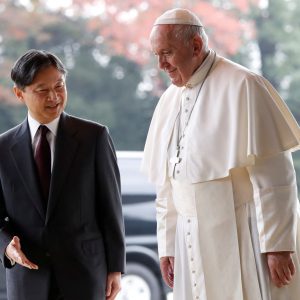 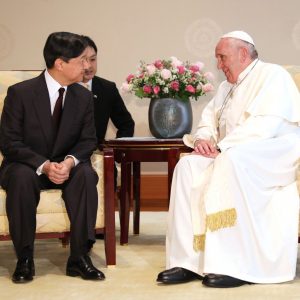 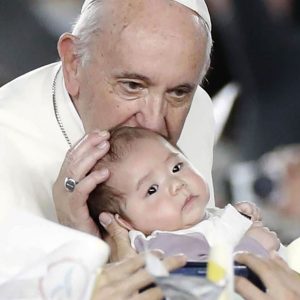 “Peace and international stability are incompatible with attempts to build upon the fear of mutual destruction or the threat of total annihilation.”

From Nagasaki to Tokyo, Pope Francis delivered a firm and sharp message about the incompatibility of nuclear arms and peace in his two-day tour of Japan that ended on November 26.

Making his message in Nagasaki, his first stop, even stronger was the fact that it was delivered on a stage at the Nagasaki Hypocenter Park, near the 6.6 meter monument commemorating the first August 1945 atomic bomb dropped on a civilian population.

It was the first visit to Japan for the 82-year-old pontiff, who is originally from Argentina, and only the second visit to Japan by any pope. Pope John Paul II made a brief stop in Japan in 1981.

Pope Francis is the first pope in history to express the view that the mere possession, not just the use, of nuclear weapons is immoral.

‘The Use of Nuclear Weapons is Immoral’

The highly symbolic trip, which saw Pope Francis meeting Japanese people from all levels of society, began in the only two places in the world to have been hit by atomic bombs: Nagasaki and Hiroshima.

He landed in the pouring rain just after 9.30 A.M. on November 24 in Nagasaki. It is the location that has an incredibly important role for Christianity in Japan. The largest number of Catholics in the country still reside there.

At the Nagasaki Hypocenter Park, the Pope condemned the use of nuclear weapons as a waste of resources:

The arms race wastes precious resources that could be better used to benefit the integral development of peoples and to protect the natural environment. In a world where millions of children and families live in inhumane conditions, the money that is squandered and the fortunes made through the manufacture, upgrading, maintenance and sale of ever more destructive weapons, are an affront crying out to heaven.

Afterwards, he visited the 26 Martyrs of Japan Memorial, located in Nagasaki’s Nishizaka Park, which commemorates the Catholics who died in a wave of persecutions in 1597. He conducted a Mass in front of 30,000 people at Nagasaki Stadium.

The Pope then moved to Hiroshima, the other location which suffered a nuclear bombing just two days before Nagasaki, on August 6, 1945. At around 6:45 P.M., he delivered sharp words condemning nuclear proliferation in a speech at the “Gathering for Peace” event at Hiroshima Peace Memorial Park, the location of the infamous Genbaku Dome.

Francis expressed his respect for the victims of the atomic bombs, comparing himself to “a pilgrim of peace,” as he said:

I felt a duty to come here as a pilgrim of peace, to stand in silent prayer, to recall the innocent victims of such violence, and to bear in my heart the prayers and yearnings of the men and women of our time, especially the young, who long for peace, who work for peace and who sacrifice themselves for peace.

Calling the use of atomic energy immoral, he continued:

Pope Francis carried his message to Japan’s top leaders on his second day in the country.

He met with Naruhito, Emperor of Japan and the 125th ruler on the Chrysanthemum Throne, in front of flashing cameras on the early afternoon of November 25. This was the first meeting of the two world leaders, and, according to sources present, the Emperor exchanged words with the Pope in Spanish before the two retreated to the Imperial Palace room known as the Take no Ma for 20 minutes.

Naruhito thanked the Pope for giving support to people hit by disasters in his visits in Nagasaki and Hiroshima and Tokyo. The Pope expressed his pleasure in being able to meet the Emperor of Japan, which he claimed he had been looking forward to since Naruhito ascended the throne in May.

In the evening, he sat at a joint press conference with Prime Minister Shinzo Abe at the latter’s official residence, where Abe reiterated the Japanese government’s commitment to being a bridge of communication towards nuclear nonproliferation among countries of the world.

Abe referred to their shared role in international cooperation, stressing that Japan is the only country that was hit by nuclear weapons:

Japan and the Vatican share the quest to achieve peace and make a reality of a world without nuclear weapons, fight poverty, and press the issues of human rights and the environment. Over these key points we are partners. On the basis of this visit, I would like to collaborate more closely with the Vatican and further improve our relations.

Tokyo: Ministering and Listening to the People

The Pope opened his second day in Japan in Tokyo by meeting survivors of what Francis called the “triple disaster,” referring to the earthquake, tsunami, and consequent nuclear disaster in March 2011, where at least 15,000 people died.

For an hour at the Bellesalle Venue in Tokyo’s Hanzomon neighborhood, the Pope met with about 300 people. The highlights were the poignant voices of three survivors: nursery school teacher Toshito Kato, Buddhist priest Tokun Tanaka, and 16-year old student Matsuki Kamoshita, who was only eight years old when the disaster struck.

Pope Francis listened intently to their testimony, responding to each one as they spoke about the value of life, the crisis of the environment, and the nuclear disaster.

The final speaker, refugee of the Great Northeast Japan Earthquake Matsuki Kamoshita, had previously met the Pope at the Vatican in March. At the end of his speech, noting the division which has arisen in the face of disagreement on the national nuclear policy, he called upon Pope Francis to pray with them: “I ask you to pray with us…. In order for the distance between us and the disaster not to get bigger, would you pray with us so that people from all over the world will act.”

The Pope answered, saying he particularly regretted the way these problems wreaked damage on the social fabric. Reflecting the dominant message of his visit, he said:

Regarding the [nuclear] disaster of Daichi, together with the scientific and environmental concerns, there are concerns for restoring the fabric of a society, the local community. And until people will have a completely safe and normal life, the disaster will not be completely overcome.

He ended the event with a call for condemnation of a society which focuses too much on technology, and prayed with the onlookers.

Later, the pontiff held a “Gathering for the Young” at St Mary’s Cathedral, where he lent a kind ear to the pains and problems of the younger generation. About 900 young people from 18 to 35 years old were present.

At around 5 P.M., Pope Francis presided over a Mass, attended by over 50,000 people, at the Tokyo Dome. Interestingly, a man named Iwao Hakamada who was sentenced to death in 1966 for a quadruple murder, was also present at the Mass. He was released in 2014 after 48 years on death row.

The pontiff sought to break down the climate of distrust that pervades the nuclear issue in particular, and thereby find a way to work together in a climate where peace and stability can prosper. Perhaps the relationship he developed with the people and leaders of Japan will help.