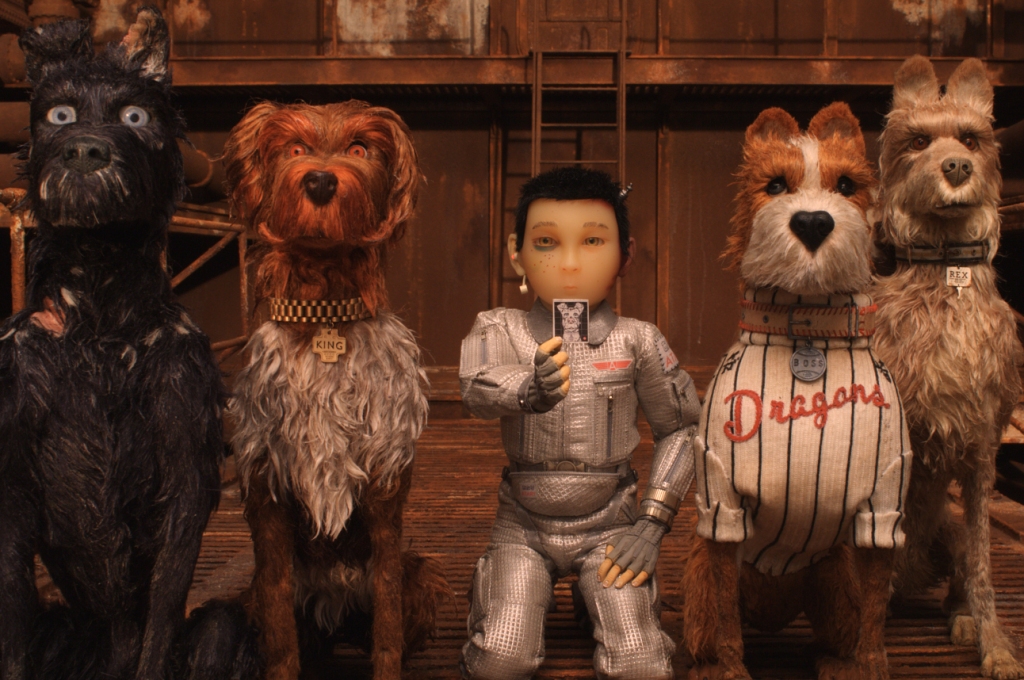 Japan is rapidly regressing to pre-war authoritarianism. The capital city’s mayor, the heir to a dynasty of sinister political leaders, is inflaming public sentiment with a series of Hitler-like rants against the largest minority group: pet dogs. Yes, there is an opposition party, but it is weak and passive, allowed to exist only as a phony token of political diversity.

Worse still, the villainous mayor is in cahoots with a senior military officer, a yakuza gang and a zaibatsu industrial group that bears his family name. Together, they are planning a so-called final solution for the dogs, which they have infected with germ warfare agents and shipped off to internment camps.

Fortunately, there is an American at hand ready to follow in the footsteps of General MacArthur and teach the Japanese true democracy. Tracy, a feisty exchange student, shows the unquestioning, sheep-like Japanese how citizenship is supposed to work by shouting, smashing sake cups, and organizing pro-dog protests. It is no accident that she is working on the school newspaper. Pretty soon, one feels, she will be interning at the New York Times.

Such is the setup of Isle of Dogs, a recently-released stop-action animated comedy set in an ersatz Tokyo, all sumo wrestlers, taiko drummers, and bullet trains snaking between skyscrapers. The director, Wes Anderson, is a much-garlanded auteur who has something of a cult following.

As with many contemporary Hollywood offerings, the amount of money and talent committed to the film is astonishing—apparently, a brief sushi-making sequence took six months to create. The end product is visually remarkable, yet uninvolving and empty. Anderson’s borrowing of musical themes from Kurosawa’s Drunken Angel (1948) and Seven Samurai (1954) only serves to highlight the gulf in seriousness and emotional impact between these classics of world cinema and a 21st-century post-modern comedy that does not make you laugh.

In the United States, the film has been criticized by campus radicals for “cultural appropriation,” a nebulous term that implies the melding of transcultural influences is somehow illegitimate. That is not a concept likely to get much traction in Japan, which has made cultural appropriation a national strategy for the past 150 years. Yet there is clearly something wrong with the way Japan is presented in Isle of Dogs.

The problem is not just the assumption of Western moral superiority, as embedded in the character of Tracy. Nor the clod-hopping political caricature—though it is hard to see a similar “final solution” puppet comedy being set in Germany. Nor the off-hand post-modern so-called jokes, such as having Yoko Ono voice a character called “Yoko Ono” and sticking a replica of Kyoto’s famous Ryoanji zen garden on “Trash Island.” The more fundamental problem is the use of language as a tool of alienation.

In the world of the film, both the humans and their pet dogs are inhabitants of Japan, so there is no reason for them not to speak the same language—as in One Hundred and One Dalmatians (1961) and many other Disney cartoons. However, in Anderson’s film, the Japanese dogs speak English, whereas the Japanese humans speak Japanese.

In several cases, the dogs are voiced by well-known Hollywood actors and have familiar personality types—the rebel from the wrong side of the tracks, the cynical glamour girl, the doughty leader, etc. We have met these dogs before and we like them. They are funny, brave, and trustworthy. They are, effectively, Americans.

In contrast, the Japanese characters communicate to Western audiences via subtitles—and these sometimes go missing, leaving non-Japanese speakers to deal with a stream of incomprehensible dialogue. Incomprehensibility appears to be the point of the project. It is never made clear why the Mayor of “Megasaki” is planning his canine genocide, apart from the fact that his family has had an animus against dogs stretching back 10 centuries. That is motivation enough for a dastardly, Fu Manchu-like villain.

Removing comprehensibility from the Japanese characters means removing empathy. The dogs are human. The Japanese—ghoulish or pathetically weak or part of an undifferentiated, brainwashed mass—are much less so. The only positive Japanese-speaking character is the boy pilot Atari, who is a kind of honorary American: he has freckles, his bogus Japanese name derives from an American video-game company, and he is voiced by a Canadian-Japanese child actor.

Japan previously appeared as a zone of indecipherable Otherness in Sophia Coppola’s Lost in Translation (2003), where it served as an exotic backdrop to the brief encounter between two narcissistic Americans, the only fully-realized characters in the film. Still, that may be preferable to the Japan-bashing Rising Sun (1993), based on the Michael Crichton novel of the same name, or the casual racism of Mickey Rooney’s “Mr. Yunioshi” cameo in Breakfast at Tiffany’s (1961).

Paradoxically, it has been genre films which have taken their Japanese characters seriously. In You Only Live Twice (1967), James Bond forms a partnership of equals with the suave Tiger Tanaka. In the Robert Mitchum vehicle, The Yakuza (1974), Ken Takakura does strong and silent as only he can.

Endymion Wilkinson, diplomat and author, wrote in 1990 that Westerners “until recently regarded the Japanese with indifference: sometimes with scorn and sometimes with fear, but seldom with respect.” Going by Isle of Dogs, in Hollywood at least little has changed.