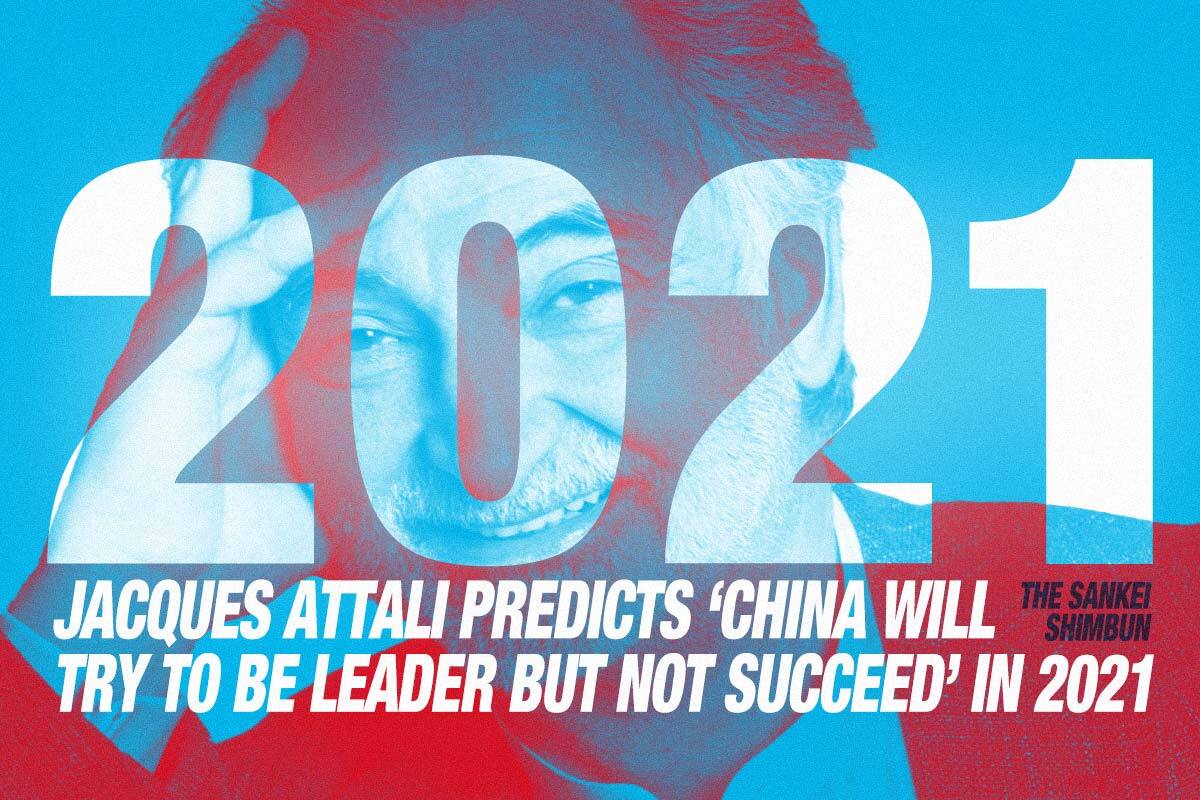 ~ I think in the years to come, what I call the “economy of life” will become key, as the global view of sectors to be developed and using digitals. ~

COVID-19 has caused us to re-evaluate the relationships among countries and people in the world. What will be the threats, and what roles will the new world order take on in the coming year? What will be the operative word of 2021?

In this installment, we share the thoughts of Jaques Attali, from his hope that following COVID-19, humanity might focus more on what he calls “the economy of life” to his prediction that China will not succeed in dominating the world. Excerpts of the interview are below.


What will be the key word going forward into 2021?

The first will be hope, because this year potentially there will be economic growth, and vaccines, and at least at the beginning of summer there will be a better view of getting out of the pandemic.

And there will be potential growth of many positive things, including some decisions taken for climate change, some technology that can be positive.

I think there could be new values that will appear, such as altruism. Sectors in the economy, such as health, education, will become more important. I think in the years to come, what I call the “economy of life” will become key, as the global view of sectors to be developed and using digitals.

But we will also have new tragedies: terrorism, poverty, the scandal of inequalities because growth and technology will not benefit everyone in a country. And we will see a lot of potential for revolutions because of the frustration created by the concentration of wealth.

China will try to be the leader of the world, but in my view, it will not succeed. And it will be a moment of truth for Europe to consolidate or to disappear as a potential partner for world stability in the future.

First, what tragedies or hopeful developments are in store?

There are many potential tragedies. One is if vaccines do not work, and are not well deployed in Asia or in Latin-America or in Africa. Or that pandemics continue and come back around the world.

Another tragedy could be a war in the so-called China Sea, where there will be problems between the American, Japanese and Chinese for the control of Taiwan, the Taiwan Straits and Taiwan itself, which is the goal of China.

Another tragedy which is possible is the dismantling of international cooperation. G7 has disappeared. [But] G20 has survived, and very well. The last G20 was very good, although not well explained to the media, it was a real success. There were a lot of excellent decisions taken.

The United Nations Security Council is a joke, it has not any influence any more, or any role in management of the world.

I think that with Mr. Biden on board, we will have more attempts to have multilateralism. But I would say that one tragedy could be mismanagement of multilateralism. There are many issues, such as health, that could see the U.S. come back to the WHO and WTO, and many international organizations such as UNESCO, where we need real multilateralism.

If not, we might enter into a period of competition between superpowers, where no one would like to see others participate. Then, as described by Mr. Hosoya, you have a real risk, as described by Mr. Luttwak, which we can see through the example of Australiaーthe beginning of a large wave of protectionism. But it could be a disaster because protectionism leads to nationalism, nationalism leads to war. That is a real risk.

What should Japan do?

There are many things Japan should do, but in terms of geopolitics I would say two things.

It is the same for Europe. We have had to prepare to not be supported by the Americans if we have a problem. I don’t see any GI or any nuclear weapon sent by America for supporting Baltic states or even Poland.

Secondly, Japan has to find a way to do with the Chinese what we, the French, have done with the Germans. This means to find an agreement and have it to move toward democracy, which is certainly their fate in the long term.

Japan in the long run will not be a stable country without an agreement with their neighbor. It doesn’t mean to be subordinated to the neighbor, just as we [the French] are not subordinated to Germany. It has to be an equal partnership, and this partnership is far ahead. You have to work on it and in order to work on it you have to help Chinese by all means to move toward democracy. We will [manage] because there is a Chinese middle class that wants democracy.

Do you think COVID 19 has meant the defeat of democracy?

I don’t think so. The history books will explain that Chinese management of the COVID-19 was a nightmare, a huge failure, because of its dictatorship.

The first thing to be established is that a dictatorship is a very bad system to manage pandemics. In a dictatorship within the country people lie to each other, people hide facts from each other, and people lie to themselves. It was exactly what happened in China in November, December 2019 and January, February 2020, where people in China hid the facts from the Central Committee and government and then the pandemic spread, causing panic. There were not [enough] masks in China and there were [not enough] hospitals. That was a mess, and they were hiding the figures, which were much higher than what they say.

A good [counter] example is South Korea. Although not as complete or full as the ones we have in Europe, it’s democracy. They faced a pandemic six years ago, they failed. It was a political scandal to get rid of the elites, so they named a new government. They have created authorities. They have established the Korean Center for Disease Control, which was in charge as soon as December [2020]. They understood through WeChat that there was a problem in China as soon as December 15. They were ready as soon as January 12, two weeks before they had the first case.

With a population of 52 million people, they have had less than 500 deaths and haven’t had a lockdown. This means that the success story of management of pandemics is democracy, not dictatorship. Of course, it’s a national democracy with more discipline, much more used to masks and all of the disciplined health and hygiene than they have in Europe and the U.S., but it is a democracy.

We should get rid of this myth that dictatorship is better to manage difficult situations. It is not true.

What do you think will be the trend post coronavirus?

I published a book about that, called “Economy of Life,” which was just published in Japanese two weeks ago.

It is very dangerous to think that people will want to go back to the situation before. We saw that after the so-called Spanish Flu one century agoーpeople [went for] a previous way of behaving, what was known as The Roaring 20s, Les années folles in French. This led to the disaster of a new economic crisis and the Second World War.

Unfortunately it’s possible after pandemic people that will want to go back to the same kind of silly behavior, a short term viewーselfishnessーand not come to focus on what I think is important, the economy of life.

This means the most important sector we should focus on is energy, specifically clean energy, hygiene, education, health, food, agriculture. These elements represent only 50 percent of GDP of our country, and it should be 70% or 80%. This includes security by the way.

What message do you have for the post-corona world?

The lessons of COVID are to remember the threats and to take care of threats in the long term.

I hope that one of the lessons is (to) make a list as soon as we can of the main threat of the next 20 years, and make the list public. It was decided at the last G20 to make a list of the threats of the coming 20 years, and in the next decade to prepare for them, such as pandemics, climate change, and geopolitical threats.

Second, we should focus on investments in the economy of the life sectors in order to be prepared for this new threat.

We will realize that it’s a wonderful world when the economy of life sectors are a priority. We will have more [investment in] hygiene, education, health, good food, and we get rid of too many cars, too much fashion and clothing, too many fossil fuels that are useless. That’s my hope.

Jacques Attali, PhD, is an internationally renowned French economist and political theorist. The 76 -year-old global thinker is a professor, writer, Honorary Member of the Council of State, Special Adviser to the President of the Republic from 1981 to 1991, founder and first President of the European Bank for Reconstruction and Development in London. Currently he is the CEP of A&A, an International consulting firm based in Paris, and president of PlaNet Finance, a nonprofit organization, among other organizations and activities. He has conducted several orcheastras around the world.