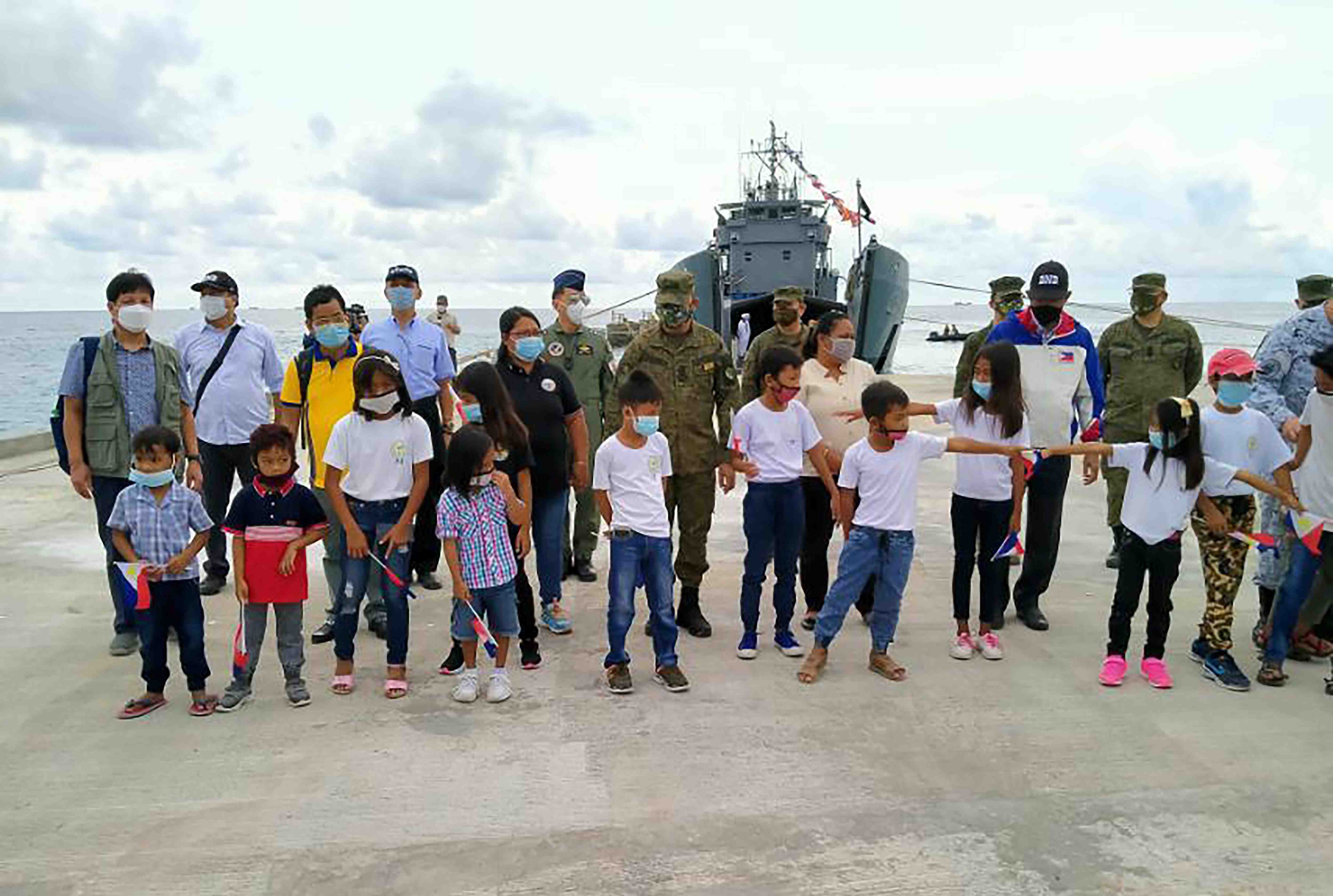 Defense Secretary Delfin Lorenzana, 4th from right, and the other military officials are welcomed by residents wearing masks during a short ceremony at the newly built beach ramp at the Philippine-claimed island of Pag-asa. (Department of National Defense PAS via AP)

Through its Official Development Assistance (ODA) program, Tokyo has begun providing the Philippine military with lifesaving materials and equipment from the Japan Self-Defense Forces (JSDF) to aid in the event of a disaster, it was learned on April 18.

This is the first case in which JSDF operational equipment has been offered to a developing country through Japanese ODA. It was made possible by a 2015 clarification under the Development Cooperation Charter that the JSDF can support assistance activities for the forces of other countries for non-military purposes.

The life-saving system comprises a set of equipment and materials —  including engine cutters, floodlights, and jack lifts — necessary for saving human lives within 72 hours after a disaster. The system, which fits into a container, can be carried aboard a helicopter or by a motor vehicle. It includes a complete range of functions, from search-and-rescue to the transport of those injured.

First introduced in 1995, the system is the result of lessons learned from the Great Hanshin Earthquake in January in that year. Maintained at bases such as Ground Self-Defense Force (GSDF) stations, the system was used, among other times, for JSDF relief operations in the wake of the 2011 Great East Japan Earthquake.

The initial batch of life-saving systems comes in four units, each comprising sonar devices for probes of destroyed structures, machine drills, lifeboats and other materials worth about ￥120 million JPY ($1.1 million USD). The first deliveries by transport ship arrived at a Philippine military base in March. A ceremony to mark the delivery is to be held in the near future.

The GSDF will continue to provide capacity building assistance with the aim of teaching the Philippine military to handle the system effectively and passing on its know-how.

In August 2020, the two countries signed a contract to export a Japanese-made air-defense radar system to the Philippine military. It was the first-ever export of finished defense equipment produced in Japan, and was made possible under the Three Principles on Transfer of Defense Equipment and Technology” adopted under Japan’s National Security Strategy in 2014.

Security cooperation arrangements with the Philippines, which are indispensable for building a network of encirclement of China, have reached a significant phase with the provision of JSDF equipment through ODA, capacity building assistance and the defense equipment transfer.

Unfortunately, a meeting planned for early May between Prime Minister Yoshihide Suga and President Rodrigo Duterte to discuss the next steps in improving security cooperation has been delayed while the Prime Minister deals with a state of emergency at home caused by the worsening pace of COVID-19 infections.

Philippines Pivot in Relationship with China

Recently, the Philippine defense and foreign affairs departments have reacted increasingly sharply against intimidating Chinese behavior in the South China Sea. A consequence has been to highlight the importance of the JSDF’s capacity building assistance program as Japan, the Philippines and other regional parties look to formulate a multilateral encirclement to contain China. Support for capability building, coupled with ODA and the defense equipment transfer, is expected to prove helpful in pushing back against China’s bid to change the status quo by force.

“Japan will combine various options within its assistance menu, including strategic use of ODA, support for capacity building by the Self-Defense Forces and defense equipment and technology cooperation, in support of the members of the Association of Southeast Asian Nations (ASEAN).”

This three-point assistance menu  was declared in May 2014 by Japan’s then- Prime Minister Shinzo Abe at the Asian Security Summit in Singapore.

The following year in 2015, the Japanese government reformulated its ODA charter, renaming it the “Development Cooperation Charter”. The current charter has clarified the objectives and principles of Japan’s support for the militaries of other countries, considered taboo under the earlier guidelines, to allow ODA “for such non-military development assistance purposes as boosting welfare in nongovernmental sectors and disaster relief.”

Focus on Assistance to Southeast Asia

JSDF’s capacity building assistance, first launched in fiscal 2012 , has been undertaken in 15 countries, mostly in the Southeast Asian region. The Philippines has received assistance since 2014 in a wide range of spheres every year up until fiscal 2019.

In March this year, an online educational program was conducted with the Papua New Guinea Defense Force (PNGDF) for the first time, for boosting its humanitarian assistance and disaster relief capabilities with a view to helping PNGDF heighten its construction machinery maintenance skills in a three-year plan.

The Philippines and Papua New Guinea are considered pivotal to the security policies of Japan and the United States. This is because Beijing aims to control the seas west of the First Island Chain between Japan’s Kyushu, Taiwan and the Philippines, in line with Beijing’s strategy of denying access by a U.S. aircraft carrier within the waters west of the Second Island Chain linking Japan’s Ogasawara Islands, Guam and Papua New Guinea.

As a Japanese high-ranking government official puts it, “We are determined to prevent the Philippines and Papua New Guinea from falling into the hands of China in return for its economic assistance, possibly allowing Beijing to build its military installations there.” A key measure for attaining this goal is the JSDF’s defense capacity building assistance projects.

A senior JSDF officer has pointed out Japan’s capacity building assistance programs “should be based on a principle well-geared to the needs of recipient countries, to ensure the programs last long in a considerate way,” noting the JSDF will forge ahead with further expansion and deepening of the programs.

The delivery of equipment and knowhow through ODA makes continuing participation of JSDF indispensable for educating the recipient countries’ forces on operation and maintenance of the equipment. In turn, this paves the way for expanding opportunities to carry out capacity building assistance projects.

Providing radar to the Philippines’ military for boosting its surveillance and reconnaissance capabilities will increase the possibility of information sharing with Japan through a capacity building assistance. Such information sharing, if materialized, would contribute, too, to the defense of Japan and Taiwan.

The JSDF has also been engaged in conducting lectures on maritime international laws in Indonesia. This helps build a shared sense of values and rule of law between the two countries, and a shared resistance to China’s self-righteous behavior in the East and South China Seas.

Meanwhile, what China is doing in its own capacity building assistance? Masafumi Iida, chief of the America, Europe and Russia Division of the Regional Studies Department at the National Institute for Defense Studies, a Japanese Defense Ministry think tank, summarized the  concerns in a 2015 report.

Citing examples such Chinese capacity building assistance as hospital ship-supported medical aid, the report says China’s programs are designed to “enhance the Chinese military’s international reputation”. However, it went on to note that it has “stopped short of yielding tangible results”.

Currently, China is not prioritizing capacity building assistance. While outwardly trying to keep its friendly relations with Southeast Asian nations through such activities as joint military drills, Beijing is keen to “strengthen its effective control over the South China Sea,” according to Mr. Iida.

(Read the original Sankei Shimbun articles in Japanese at this link and this link.)