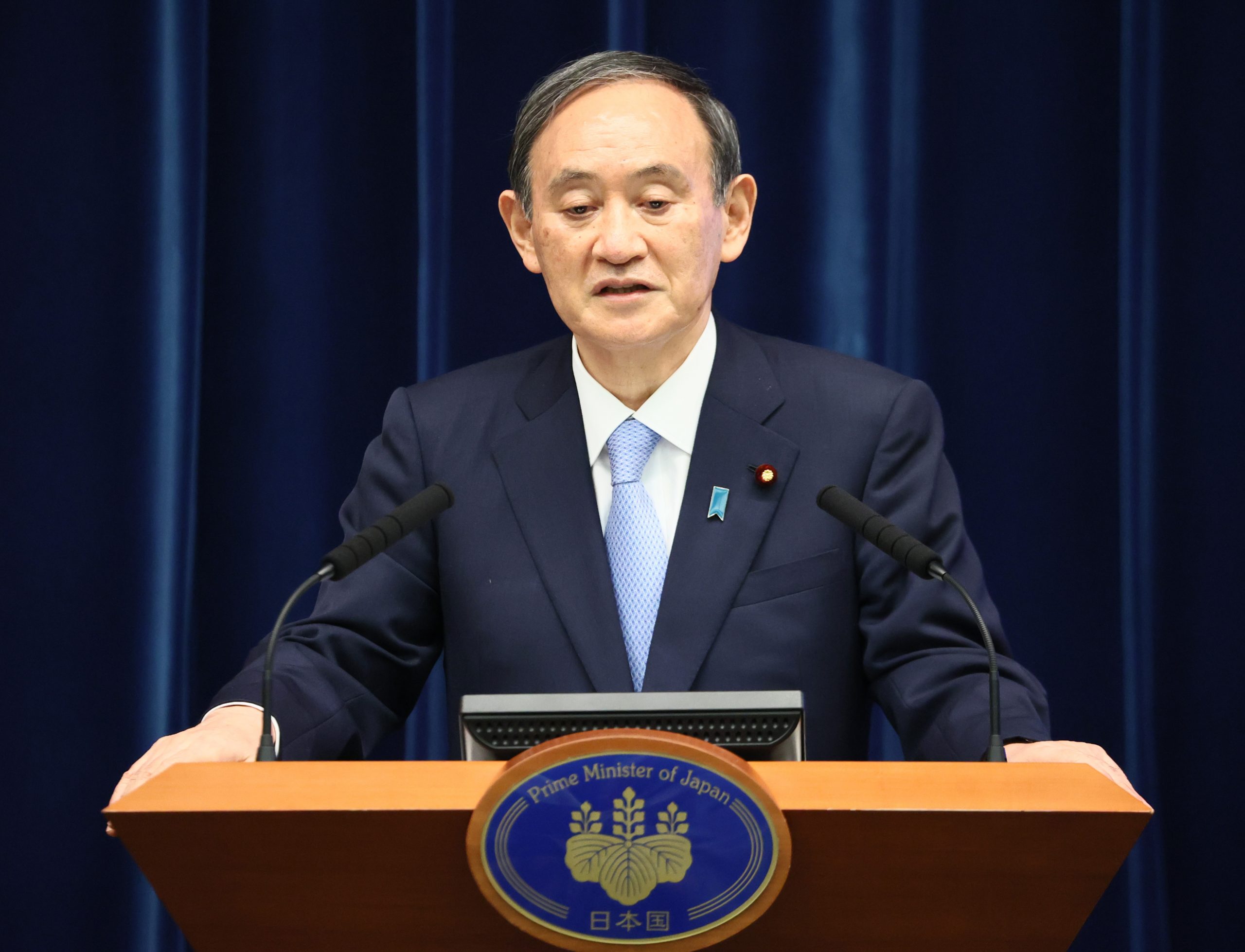 Prime Minister Yoshihide Suga in a Press Conference on May 28, 2021

Japan’s third state of emergency, due to expire on May 31 for most regions, has instead been extended until June 20.

In a May 28 press conference, Japanese Prime Minister Yoshihide Suga explained the reasoning behind the government’s extension of the state of emergency (SOE) in Japan for an extra month.

The extension was attributed to the increasing number of infections in the Kansai area, in particular. Experts have pointed out that there is fear that the mutant version of the virus from India -called B.1.617- is already spreading quickly among the general population.

However, in a message that conveyed hope as well, the Prime Minister asked for the Japanese public’s collaboration one last time, expressing confidence that with the increasing vaccination of the Japanese public, life in the countrywill gradually be able to get back to normal.

In fact, on the vaccine front, PM Suga expressed satisfaction that vaccinations had reached “400,000 to 500,000 jabs a day”, and showed optimism for achieving the concrete aim of “vaccinating 1 million people per day,” by mid-June.

In addition, the PM said that, assuming the vaccination of over-65s progresses smoothly, the government would start vaccinating those with pre-existing health conditions in June, followed quickly by opening it up to all other members of the general population.

Suga added that the government has plans to expand its collaboration with those in the medical field by asking MRI technicians and paramedics to join the rollout effort.

His appeal included a spirit of hope he has never used before, with a pitch for Japanese to get vaccinated:

“By increasing the pace of the vaccine rollout, we can face a never before faced challenge, and do our utmost to bring back the everyday life of citizens with peace of mind. If we join forces, we can beat the virus, and I plan to stand at the forefront of this battle, and for this I ask again for everyone’s understanding, and cooperation.”

Reasons Behind Extension of the SOE

Listening to the press conference, it was clear that the number of infections around the country was a key factor driving the extension of emergency measures.

“Although there is an overall decreasing trend in infections, there are also areas that are seeing an increase in new cases. There is pressure on the medical system, making this a situation which doesn’t allow foregone conclusions,” Suga explained. “This is why we decided to extend the state of emergency.”

Japan recorded 4,140 new daily infections and 119 new deaths on May 27. On the same day, the total number of serious infections stood at 1,371, the second highest level since the start of the pandemic.

Total infections are down from a peak of over 7,000 new cases a day nationwide seen at the beginning of May, but the number of deaths is at the high plateau of just over 100 deaths per day nationwide.

RELATED: Japan Calls Strictest Measures Yet for Restaurants in Third State of Emergency

Professor Shigeru Omi, head of the government’s COVID-19 subcommittee who also participated in the press conference, enumerated three elements which had an impact on the recommendation of an extension. They were:

Basics of the Emergency Measures

In all these regions, the measures are set to continue until June 20. They include:

There are also some differences. Cinemas that were closed up to now under the third state of emergency will be allowed to open their doors once more, as will museums.

However, local governments will still have discretion to apply rules independently. For example, Osaka Governor Hirofumi Yoshimura announced on May 27 that he was planning to ask department stores to operate only during weekdays. Tokyo is set to follow suit.

Meanwhile, several other regions remain under lower states of alert which enable local governments to limit economic activity to combat the spread of the virus. Chiba, Kanagawa, Gifu and Mie are set to continue imposing special measures until June 20, while Gunma, Ishikawa and Matsumoto Prefectures will see the end of COVID-related restrictions on June 13.

Prime Minister Suga showed particular worry about the virility of the Indian variant of the virus, noting: “There are even people in Japan who have been diagnosed with the Indian variant, but don’t have a record of traveling abroad.”

He announced that starting on May 28, the government is implementing stronger measures to fight the entry and spread of the Indian variant of the virus.

Going forward, all those coming from India, Nepal, Pakistan Bangladesh, the Maldives and Sri Lanka will have to comply with 10 days (instead of the previous six days) of quarantine in a designated government accommodation. They will have to take multiple PCR tests during that time, on top of the PCR test 72 hours before entering Japan.

Previously, those coming from countries designated by the Ministry of Foreign Affairs as locales where virus variants had been confirmed, such as the U.K. or other countries in Europe, had to stay in government facilities for only three days and install software on cell phones to allow monitoring of their physical location and health condition during the quarantine period.

Regardless of the departure country, many students and workers who were seeking first-time residency, and all tourists, have been denied entry to Japan since April 2020.

The new measures, however, exclude all athletes, coaches and officials specifically related to the Olympics, who will apparently enter under special rules that keep them segregated from the general population of Japan.

From beginning to end, it’s clear that the government is putting all hope and resources behind one thing: the vaccine.

In a press conference on the morning of May 28, the Minister in charge of vaccinations Taro Kono announced that Japan had surpassed 10 million inoculations, with over 7 million jabs to medical staff and the rest to the senior population.

There were over 330,000 jabs to over-65 on May 26 alone, a record so far. The percentage of people nationwide who have received a first shot has gone from less than one percent, to just under three percent in the space of a couple of weeks.

One major issue at this point seems staffing the vaccination effort. Suga also addressed this in his press conference.

“Dentists are already helping with the vaccination effort. We plan to ask lab technicians as well as paramedics for collaboration going forward.”

On the other hand, he admitted there were problems with the proposal to involve pharmacists because of the legal framework. “In other countries, pharmacists can vaccinate. In Japan, that isn’t possible. However, we plan to ask for their assistance by other means where possible,” he said.

Although the vaccine initiative started late (February 12) and moved at a glacial pace in the beginning, the speed has finally picked up, thanks to local and national efforts such as the mass vaccination centers operated by the Self-Defense Forces and the collaboration of big and small businesses.

Road to the Olympics

Domestic debate over the upcoming Olympics has put a different spotlight on Japan’s efforts to control COVID-19.

Regarding concerns about the upcoming event, Suga showed a level headed response: “There are many voices who are expressing worry and concern about the holding of the Olympic Games. I want to consider each and every concern, and while working with the relevant bodies, do all I can to deliver a safe and secure Olympic Games.”

Suga enumerated several ways this would be done, beginning with limiting the number of international guests from the original 180,000, to fewer than 79,000.

In addition, he reassured the Japanese public that these guests would have no interaction with the Japanese people, and would be tested regularly for COVID-19.

Moreover, he pointed to the four test events that have been held in Tokyo at which COVID-19 prevention procedures were successfully implemented, showing hope for the holding of the Games.

Dr. Omi joined PM Suga in expressing more optimism about the future prospects of managing the COVID-19 infection rate, and looking ahead to the end of the state of emergency on June 20.

“With this variant, we have found ourselves with a new challenge and until now, we have largely asked citizens to stay home,” said Dr. Omi. “Now with the vaccine, going forward we will hopefully be able to smoothly end the state of emergency, and ask for measures with which citizens will be more willing to comply.”

He went on to point out that, while vaccinations are certainly a key, they are not the only element we will need to incorporate into our life in the future.

The inability to keep up with how fast the infection moves from person to person has been a problem which is particularly pronounced among the younger population as new variants spread.

One option to get a better grasp of the extent of the infection, according to the government, would be regular mass testing on school and university campuses. It was reported on May 21, for example, that Waseda University in Tokyo was planning on testing up to 50,000 students across four campuses.

According to Professor Omi, increased testing, especially in large cities, will be an important part of life in a post-corona world.

“One of the issues is that although in smaller communities we know exactly how the virus travels, this isn’t true in large cities, which means we can’t bring the infections lower than a certain amount,” he said. “A point that I think will become important going forward is therefore the technology, and specifically testing technology. I think we need to put more resources into this going forward. “

Moving forward is indeed progress in this pandemic. The May 28 announcements might feel like just another state of emergency, but it looks like better things are to come.