BASKETBALL | Jets Dominate Second Half in Rout of Brex in B. League Finals Opener 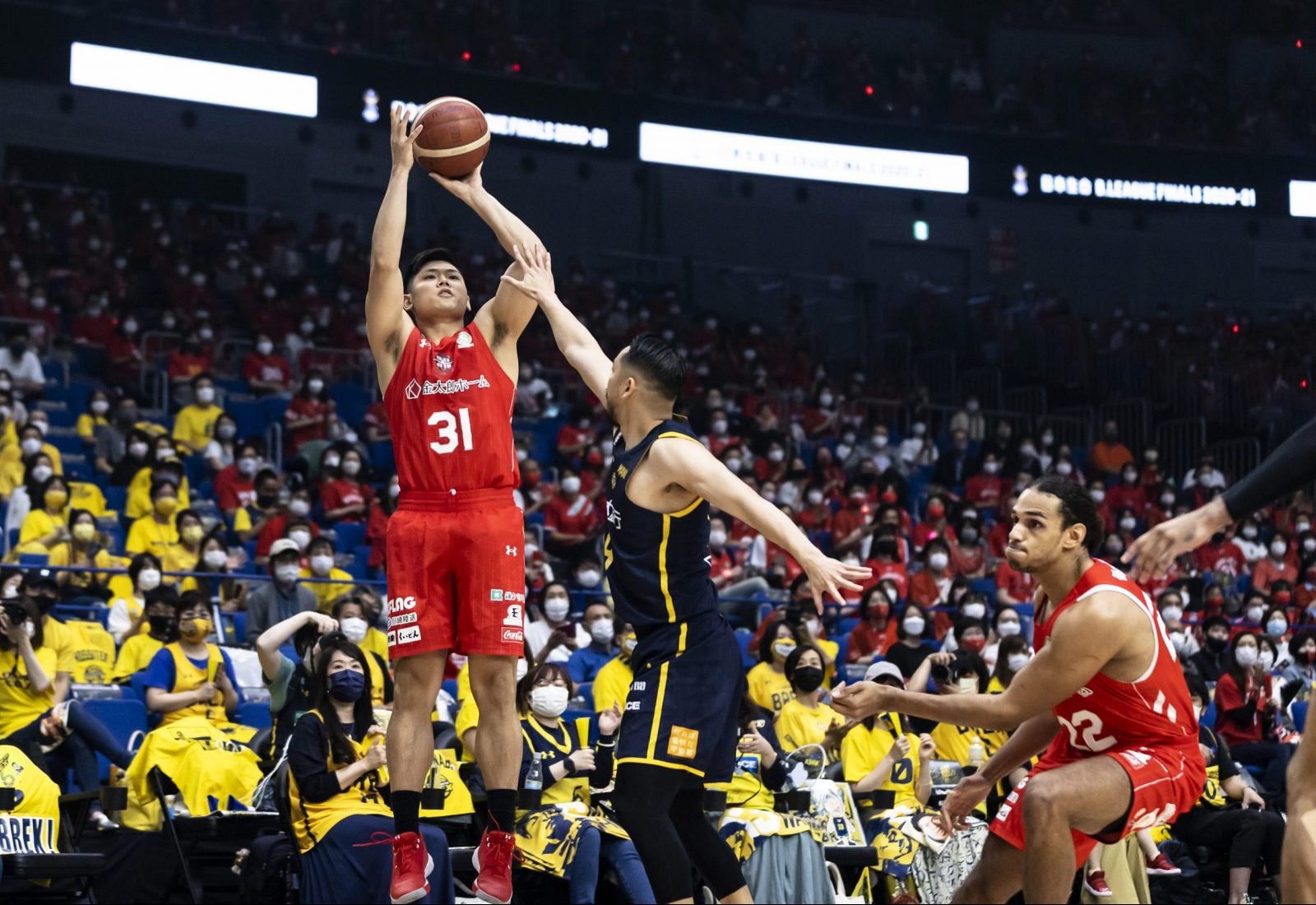 Chiba Jets swingman Shuta Hara shoots a first-quarter jumper in Game 1 of the B. League Finals on May 29. (B. League)

YOKOHAMA ー The Chiba Jets jumped out to a 10-2 lead on a Sebastian Saiz basket in the first quarter in Game 1 of the B. League Finals. It was a good omen for bench boss Atsushi Ono’s team.

But then the Utsunomiya Brex had their best stretch of the game, a 11-0 run to pull ahead 13-10 on a Makoto Hiejima 3-pointer with 2:26 remaining in the opening stanza on Saturday, May 29.

Though the Brex played their best basketball for about 5 1/2 minutes during that critical spurt, they didn’t sustain that high level of play for the entire game.

Poised, focused and energetic from start to finish, Chiba capitalized on Utsunomiya’s shortcomings in the second half, dominated at boths ends of the floor and cruised to a convincing 85-65 victory before an announced crowd of 4,678.

Game 2 of the best-of-three series is on Sunday, May 30 at the same venue. Tipoff is 3 p.m. If Utsunomiya, which had a league-best 49-11 record during the regular season, wins on Sunday, the series will be extended to Game 3 on Tuesday, June 1 (7:05 p.m.), also at Yokohama Arena.

American-born big man Gavin Edwards, a University of Connecticut alum and naturalized Japanese citizen, paced the Jets with 15 points and pulled down 12 rebounds. Frontcourt mate Sebastian Saiz also finished with a double-double, scoring 13 points and grabbing a game-high 16 rebounds and adding two steals and two blocks. Also scoring in double figures for the Jets were Josh Duncan (14 points) and captain Yuki Togashi (13). Shannon Shorter and Shuta Hara each had nine points, with Shorter dishing out a team-high five assists. Koh Flippin chipped in with six points and four assists off the bench.

In the pivotal third quarter, the Jets’ strong defense combined with excellent rebounding, good shooting and abundant energy proved too much for the Brex to handle.

Utsunomiya is a team that fights with great energy, so we had a talk with the coaches before the game to try to fight with energy that can compete with [the Brex,” Edwards said. “And we were able to express it on the court. I think that led to the victory.”

By the end of the quarter, Chiba extended its lead to 57-46. The 206-cm Edwards scored nine third-quarter points on 3-for-4 shooting and also made 3 of 4 free throws in the period. Saiz’s active inside presence helped limit second-chance scoring opportunities for the Brex by grabbing seven defensive rebounds in the third.

If the Brex had been able to score a bit more consistently, the complexion of the game might’ve changed.

Instead, the Brex’s shooting woes, especially in the third quarter (3 of 19) left them frustrated.

“The game plan was good,” Utsunomiya forward Ryan Rossister, a key player on the team’s 2016-17 B. League championship squad, said after the game. “[Our] execution was poor.”

Looking ahead to Game 2, Rossiter said it’s quite simple to recognize what his team needs to accomplish. “Play with confidence and shoot with confidence,” he said. “We have to remember who we are.”

He went on: “We were the best team all season. We didn’t play like it today.”

Saiz said the Jets put their stamp on the game by maximizing their effort, calling it “great.”

Needing only one more victory to capture their first B. League title, Saiz, who was No. 2 in the B. League in rebounding this season (11.7 per game) said the Jets must replicate their performance on Sunday.

“We know it could be the last game of the season,” said the Spaniard, who played college ball at the University of Mississippi. “We’ve got to give it our all tomorrow and finally get the championship.”

Chiba’s Togashi, Edwards, Fumio Nishimura and Hara alll experienced the disappointment of the team’s back-to-back championship runner-up finishes in the 2017-18 and 2018-19 seasons (both times falling to the Alvark Tokyo in the final). The Jets were title contenders last season, too, but the playoffs were canceled due to the global COVID-19 pandemic.

Another excellent season in the 2020-21 campaign gave Ono’s squad another shot at a title.

A few team-by-team statistical comparisons underscore the fact that the Jets outworked and outhustled the Brex.

Brex coach Ryuzo Anzai acknowledged that the Jets dictated the outcome of the game because of their sizable advantage in second-chance points. He also noted that his team had a subpar game across the board.

“We couldn’t develop Brex-like basketball today,” he lamented, “so we want to play our style of basketball tomorrow.”

Rossiter, the Brex’s leading scorer in the regular season (12.9 points per game), also struggled to put the ball in the basket, finishing with eight points on 3-for-14 shooting.

To their credit, the Jets guarded Rossiter effectively and aggressively, not giving him many good looks at the basket or lots of open space to operate.

As one of the league’s better rebounders, Scott issued a challenge to himself to step up and play better in Game 2.

Jets Control the Second Half

As the Jets continued to impose their will on the game, the Brex trailed by double digits throughout the fourth quarter.

Togashi, a tone-setting force for the Jets, said the memory of the Jets’ aforementioned defeats in consecutive title games ignited his team’s drive for a title this season, including on Saturday, and “[we need] to repeat this effort tomorrow.”