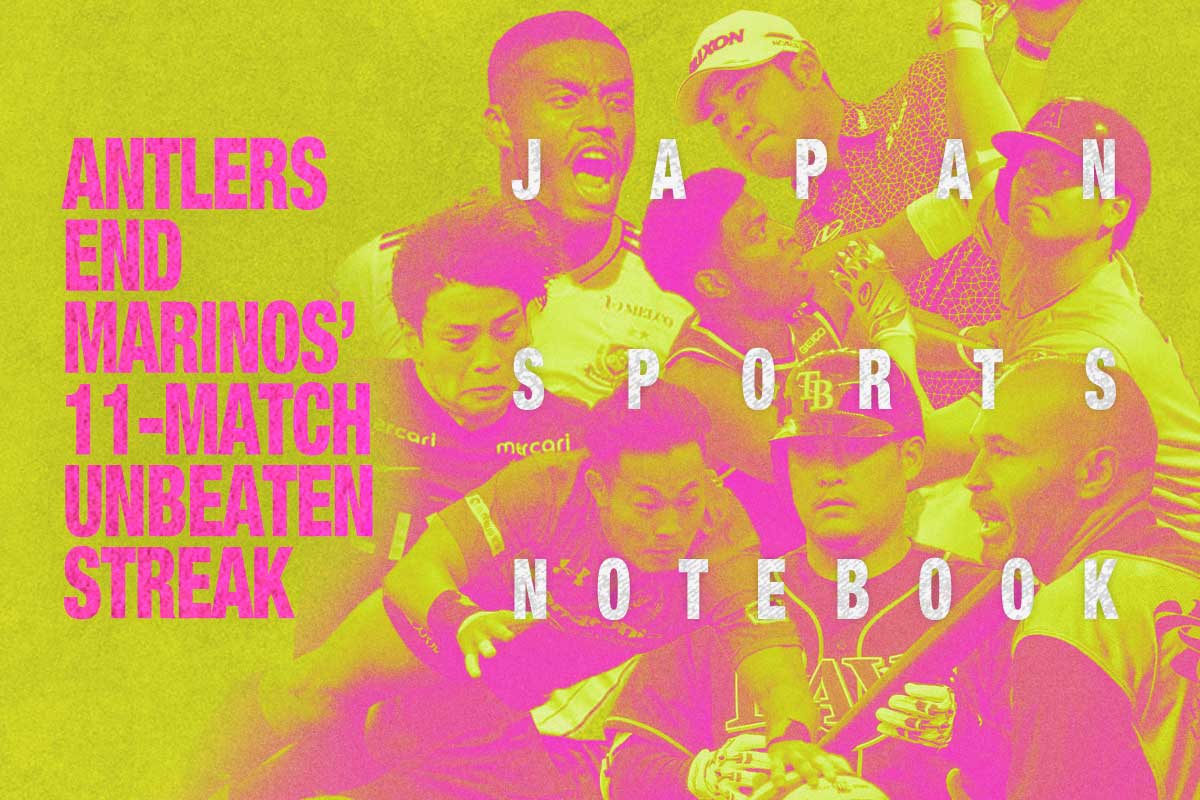 Since the J. League’s inception in 1993, the Kashima Antlers and Yokohama F. Marinos have occupied significant spots in its history book.

After all, they own a well-documented, combined total of 12 league titles, with Kashima winning a league-record eight titles.

The traditional powers squared off for the first time in the 2021 season on Saturday, May 14, and manager Naoki Soma’s Antlers halted Marinos’ 11-match unbeaten streak in the J. League.

Kashima’s Shoma Doi scored a hat trick in the hosts’ 5-3 triumph before an announced crowd of 11,630 at Kashima Soccer Stadium.

A 1-1 halftime score transformed into an goal-scoring outburst for Kashima.

It was a rapid-fire display of scoring prowess for Antlers midfielder Doi, with strikes in the 40th, 46th and 53rd minutes.

Ryotaro Ariaki added a goal in the 55th minute and Ayase Ueda completed the hosts’ scoring in the 77th minute.

Ado Onaiwu bagged a brace for Marinos, whose unbeaten run was 16 matches in all competitions, hitting his target in the 25th and 74th minutes, and Jun Amano scored before the final whistle in the 90th minute.

After the match, Soma summed up his team’s dramatic turnaround by telling reporters his players’ determined effort paid off in the second half.

“The players got out and moved,” he told reporters. “I think that’s the way it is.”

Onaiwu has been one of Yokohama’s bright spots on offense in 2021, scoring 10 goals to date. He entered the weekend three goals behind league leader Anderson Lopes of Consadole Sapporo. Marinos teammate Daizan Maeda is No. 2 on manager Ange Postecoglou’s club with eight goals.

After falling to the Antlers, Onaiwu reflected on the match in an Instagram post. He said Marinos can build off this setback.

“We will become stronger so as not to waste this loss,” Onaiwu wrote.

“We were the ones who couldn’t stop [Kashima’s scoring barrage] … so we still have to learn from it,” Kida told reporters. “I think today’s defeat is a mission we have to move up. We have to show the part of how we climb up from here. I want to take today’s regrets so that we can look good next time…”

With only one victory in their past 10 matches, Gamba Osaka’s season has been a huge disappointment for team ownership.

As a result, manager Tsuneyasu Miyamoto was fired on Thursday, May 13.

Gamba finished in second place in the J. League last season, while Miyamoto, a 44-year-old Osaka player, took home the league’s Manager of the Year award.

The club is currently in 18th place in the J. League’s 20-team first division.

Another ex-Gamba player, Masanobu Matsunami was named Gamba’s interim soccer boss. His first game in charge is on Sunday, May 16 against the visiting Urawa Reds at Panasonic Stadium Suita.

The Spaniard has signed a two-year contract extension with Vissel Kobe, it was announced on his 37th birthday, Tuesday, May 11.

Iniesta joined the J. League club in 2018 after a spectacularly successful run with Barcelona.

“I will keep persisting with taking on this challenge with the same passion and drive I felt three years ago,” Iniesta told a news conference.

With Iniesta providing leadership and inspiration for the club, Vissel played in the Asian Champions League for the first time in 2020.

Los Angeles Angels slugger Shohei Ohtani smacked his 11th home run of the season on Friday, May 14 at Fenway Park in Boston.

Ohtani’s solo shot in the sixth inning over the Green Monster was his first career homer at the famous Beantown ballpark. He is tied for the American League lead in home runs (11) along with Seattle Mariners power hitter Mitch Haniger and Jose Ramirez of the Cleveland Indians.

He also belted a double off the left-field wall in the first inning of the Angels’ 4-3 loss to the Boston Red Sox.

Yoshitomo Tsutsugo has struggled to hit MLB pitching since playing his first game for the Tampa Bay Rays last season.

The first baseman/designated hitter batted .197 with 50 strikeouts in 51 games in the pandemic-shortened  2020 season. Tsutsugo is hitting at a .167 clip with zero homers and five RBIs in 26 games this season.

The Rays designated the former Yokohama DeNA BayStars standout for assignment on May 11. Tsutsugo was dropped from Tampa Bay’s 40-man roster, and he’s expected to join another franchise as a free agent (after clearing waivers) or start playing for their Class AAA Durham affiliate.

“Certainly not the outcome that we had in mind, that Yoshi had in mind,” Rays general manager Erik Neander was quoted as saying by the Tampa Bay Times. “I don’t want to close the book on him, but I do think that the opportunity wasn’t going to be there for him to turn himself around right now.

(Update on Monday, May 17: The defending World Series champion Los Angeles Dodgers acquired Tsutsugo from the Rays for cash or a player to be named on May 15.)

Kokugakuin University prevailed 4-2 over Chuo University on Friday, May 14 at Jingu Stadium to capture the Tohto University Baseball Spring League title, the school’s first league title since winning it during the 2010 fall season.

With a 10-2 overall record in league play in the spring season, Kokugakuin earned a spot in the 70th All Japan University Baseball Championship, which begins on June 7.

The Panasonic Wild Knights trounced the Toyota Verblitz in the Japan Rugby Top League semifinals on Saturday, May 15, winning 48-21 at Prince Chichibu Memorial Rugby Ground in the nation’s capital.

Panasonic awaits the winner of the second semifinal, which pits the Suntory Sungoliath against the Kubota Spears on Sunday, May 16 at Osaka’s Hanazono Rugby Stadium, in the playoff finale.

The championship match is scheduled to be played on May 23 at Prince Chichibu Memorial Rugby Ground. The Wild Knights will vie for their fifth league crown in the Top League’s final season. A new three-tier circuit replaces the Top League next season.

Toyota led 18-17 at halftime, but Panasonic turned up the heat after the break, scoring four second-half tries, including two by Kenki Fukuoka. The Wild Knights outscored the Verblitz 31-3 in the second half.

We knew it would be a tough game, so we prepared thoroughly,” Matsuda was quoted as saying by Kyodo News. “Our defense kept giving us the ball, and that proved to be the difference.”

“Now we want to do well in the final and send [Fukuoka, who is retiring to pursue a career in medicine] off a winner.”

In other rugby news, the Japan men’s national team will prepare to face Scotland in Edinburgh on November 20.

For the Brave Blossoms, it will mark their second trek to Scotland this year. Japan is penciled in as the British & Irish Lions’ foe at Murrayfield on June 26.

The 20 candidates will be pared down to 12 before the Olympic tourney tips off in late July.

The positional breakdown of the provisional roster is as follows:

Up next: A national team training camp is set to begin on June 5, followed by Japan’s participation in FIBA Asia Cup qualifiers from June 13-20 in the Philippines.

Forward Rui Hachimura had 14 points and three rebounds in the Washington Wizards’ 120-105 win over the Cleveland Cavaliers on May 14.

With the victory, Washington clinched a berth in the NBA’s Eastern Conference play-in tournament.

The Wizards (33-38) have won 16 of their last 22 games. They are 10th in the Eastern Conference. They face the Charlotte Hornets in their final regular-season game on Sunday, May 16.

Coach Scott Brooks’ club will meet the TBD No. 9 seed (either the Hornets or Indiana Pacers) in its first game of the four-day, play-in round, hoping to advance to the playoffs. The Boston Celtics (35-35) are in seventh place in the East.

The play-in round starts on Tuesday, May 18.

Matsuyama Getting Back in the Swing of Things

Hideki Matsuyama acknowledged that a layoff after winning the Masters in April has affected his game.

It included a two-week quarantine after he returned to Japan last month following his historic victory.

Matsuyama was tied for 53rd place at the midway point of the AT&T Byron Nelson tournament in McKinney, Texas, on May 14. He shot 4-under 68 in the first round and 2-under 70 in the second round for a combined 6-under 138. Compatriot Satoshi Kodaira was also tied for 53rd (67-71), 11 shots off the pace.

American Sam Burns led after two rounds with a 17-under 127.

“Not picking up a club very much over there, I didn’t get to practice very much at all,” Matsuyama told reporters on May 11 at the TPC Craig Ranch course as he made preparations for the tournament. “And then coming back here, and I’m just, really one of my goals now is just to try to find my game again.”

In other golf news, Matsuyama was named April’s Hickok Belt Award, it was announced on May 14.

“I’ve always maintained my whole coaching career that goals and dreams and aspirations are kind of secondary to me. I love what I do. I dodged having a real job my whole life. There isn’t a day I’ve got up and said ‘Ah, I’ve got to go into work today.’ I just don’t see it that way. I love what I do and my passion is football and just seeing the team play a certain way. That’s my greatest joy still.”

“We will ensure the proper virus measures are in place for athletes and staff to participate so they will not have to worry. By taking thorough steps to protect the lives and health of the Japanese people, I believe it is possible to realize a safe and secure Games.”

ーYoshihide Suga, the Japanese Prime Minister, speaking at a news conference on May 14.