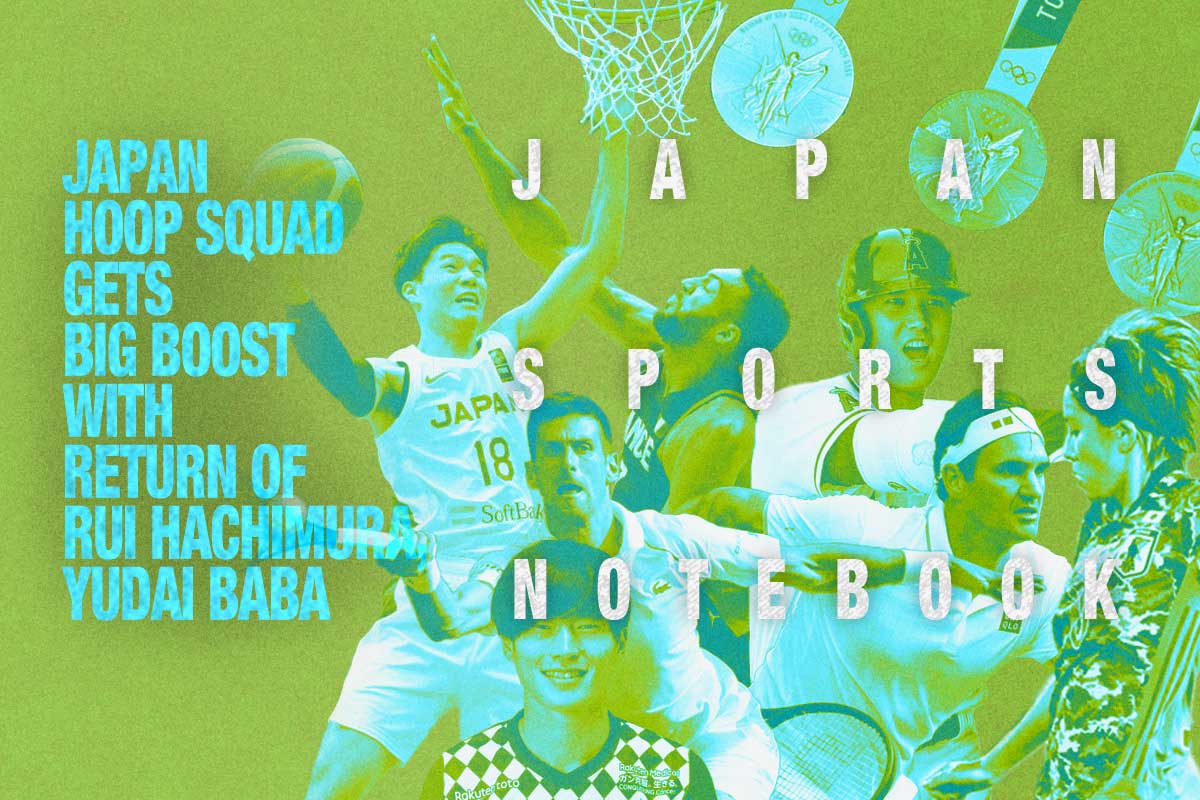 Japan forward Rui Hachimura takes a shot in the second quarter against France on July 18 in Saitama.

Rui Hachimura and Yudai Baba are back in their Akatsuki Five uniforms, and they have clearly elevated the Japan men’s national team’s level of play with youthful energy and dynamic athleticism.

In Japan’s final exhibition match before the Tokyo Olympics, Hachimura and Baba played pivotal roles in the team’s 81-75 upset victory over world No. 7 France on Sunday, July 18.

Hachimura, the No. 9 pick in the 2019 NBA draft, scored a team-best 19 points and snared seven rebounds before an electrified crowd at Saitama City General Gymnasium. Fellow NBA player Yuta Watanabe of the Toronto Raptors poured in 18 points, pulled down nine rebounds and added two assists, two steals and a block. Makoto Hiejima (Utsunomiya Brex) contributed 15 points, nailing both of his 3-point shots. Big man Gavin Edwards of the B. League champion Chiba Jets chipped in with seven points, six rebounds, three assists and an irreplaceable effort in the team’s pick-and-roll offensive sets. Edwards freed up space for his teammates with excellent picks. Alvark Tokyo playmaker Daiki Tanaka made a solid impact, too, providing six points, four assists and two steals.

Japan led 46-30 at halftime an held a double-digit lead for large stretches of the high-paced contest.

France pulled to within 61-58 by the end of the third quarter.

“We were doing well in the first half, but the rhythm was broken in the second half, and my teammates [stepped up] and we were was able to win,” said Hachimura, who scored 14 first-half points.

In a strong passing performance as a team, six Japan players had two or more assists.

Sunday’s match was the third between Japan and France on the global basketball stage.

For Japan men’s national team coach Julio Lamas’ squad, utilizing his full lineup made a difference, with Hachimura starting in the frontcourt alongside Edwards and versatile veteran Watanabe.

With the Akatsuki Five’s full complement of 12 players, and the addition of the 23-year-old Hachimura, who made his first national team appearance since 2019 on Friday, July 16, and the 25-year-old Baba, the young stars stepped up in Japan’s rematch against Belgium.

Hachimura finished with 24 points on 7-for-9 shooting and six rebounds in just under 19 minutes of court time. The Washington Wizards player also had two assists. Watanabe added 15 points, including 3-for-4 from 3-point range and grabbed rebounds, Edwards poured in 10 points. Baba, who won a league title in 2021 with the Australian NBL’s Melbourne United and started at shooting guard, chipped in with six points, a team-best seven rebounds and two assists.

After returning to national team duty and energizing the squad, Hachimura summed up his top goal this way: “I want to give confidence to the team.”

Lamas commended his players for their effort at both ends of the floor.

The defense worked and we were able to make haste on offense,” Lamas said.

Moreover, Lamas observed that Hachimura and Baba were difference makers.

“It was a different game from the previous match against Belgium, and having a full [squad] led to this victory,” the coach stated.

Japan, set to compete in the Olympic men’s tournament for the first time since the 1976 Montreal Games, faces world No. 2 Spain, the reigning FIBA World Cup champion, on July 26 in Group C play. That game is followed by games against No. 16 Slovenia on July 29 and No. 4 Argentina on August 1. Two Group C teams will advance to the knockout phase of the tournament.

The attention given to the U.S. men’s basketball stage at every Olympics is quite high, but the American women’s track record of success is also astounding.

Entering the Tokyo Games, the U.S. women have won six consecutive gold medals dating back to the 1996 Atlanta Games.

U.S. women’s coach Dawn Staley, a three-time Olympic champion as a point guard, was appointed national team bench boss in 2017. She also serves as the University of South Carolina coach.

Staley is preparing the national team for the Olympics at a training camp in Las Vegas.

Following a 70-67 loss to Australia on July 16, Staley said her squad is a work in progress.

It’s not time to push the panic button, Staley insisted in a post-game interview with reporters.

“We’re getting better,” Staley remarked after the game at Michelob ULTRA Arena.

“Obviously not in the win column, but some of the things that we did out there were remarkably better than Wednesday [July 14]. We just got to clean up some things.”

Staley’s squad dropped its previous game, 93-85, against the WNBA All-Stars.

The Olympic powerhouse squad faces Nigeria in its final game on Sunday, July 18 before heading to Japan.

The D.I.Y. Olympics: Athletes to Grab Their Own Medals During Ceremonies

In a decision that’s uniquely tied to the complex challenges of hosting the Olympics during a global pandemic, this year’s top-three finishers will not participate in normal medal ceremonies.

In the words of IOC President Thomas Bach, “[Medals] will be presented to the athlete on a tray and then the athlete will take the medal him or herself. It will be made sure that the person who will put the medal on the tray will do so only with disinfected gloves so that the athlete can be sure that nobody touched them before.”

Not surprisingly, this unusual set of protocols is attracting global attention.

American comedian Jimmy Fallon, who hosts The Tonight Show, talked about it during his opening monologue on Thursday, July 15.

“And just like at your neighbor’s house on Halloween, the tray will have a giant sign that says, ‘Please take one,’ ” Fallon said.

Fallon also cracked a joke about hygiene on the track.

“Also when the baton is handed off at the relay race, you have to grab it using a Clorox wipe,” Fallon said.

The individual’s name and nation were not disclosed. Not an Olympic athlete, the person was to be a “Games-concerned personnel,” according to published reports.

That person has been placed in a 14-day quarantine.

Tokyo 2020 CEO Toshiro Muto spoke about the matter at a news conference on the same day.

“The PCR test conducted yesterday came back positive,” Muto told reporters. “The individual is currently confined to a hotel.”

A Ugandan weightlifter who was training with the national team in Japan was reported missing in Izumisano, Osaka Prefecture, after not showing up for a scheduled COVID-19 test on July 16.

Julius Ssekitoleko, who competed in the 2018 Commonwealth Games, didn’t qualify for the Tokyo Games after his arrival here.

The 20-year-old purchased a shinkansen ticket to Nagoya and wrote in a note that he wanted to stay in Japan and work, an Izumisano city official said, CNN reported.

“The IOC has been informed about the situation of one Ugandan athlete. We are in touch with the NOC in order to clarify the situation,” the IOC said in a statement.

Mana Iwabuchi’s 54th-minute penalty lifted Japan to a 1-0 victory over Australia in the teams’ last warm-up match before the Olympic women’s soccer tournament on Tuesday, July 13 at Sanga Stadium in Kameoka, Kyoto Prefecture.

“It was good to get to play a hard game like this against wonderful opponents like Australia,” Takakura was quoted as saying by Kyodo News. “We were passive both offensively and defensively so we will break this game down and make adjustments.”

Federer Opts Out, Djokovic Choose to Play in Tennis Tournament

Roger Federer, who underwent two knee surgeries last year, has decided to skip the Olympic men’s tennis competition due to what he described as a recent “setback.”

“I have already begun rehabilitation in the hopes of returning to the tour later this summer,” the 39-year-old wrote on Twitter.

The 34-year-old Serbian also won the Australian Open and French Open earlier this year. If he wins the Olympic gold and the U.S Open in September, he’d be the first man to capture the “Golden Slam.” In 1988, women’s legend Steffi Graff accomplished the remarkable feat.

“I am very proud to pack for Tokyo and join our national team in the fight for the brightest medals on the Olympic arenas,” Djokovic wrote in a social media post. “For me, the game for Serbia has always been a special joy and motivation and I will do my best to make us all happy! Let’s go.”

Wizards’ Beal to Skip Olympics Due to COVID-19

Washington Wizards shooting guard Bradley Beal, who was second in the NBA in scoring (31.3 points per game) this past season, will not play for the U.S. men’s basketball team at the upcoming Olympics.

Beal was placed in COVID-19 protocol on Thursday, July 15, the same day USA Basketball made the announcement.

“Bradley, there’s no doubt, he’s a huge loss. He was playing very well, understanding everything and fit in well with the group,” Popovich told reporters. “So there’s no next Bradley Beal.”

Kyogo Furuhashi, the J. League’s leading scorer this season, has agreed to a four-year deal to play for Glasgow-based Celtic FC, the Scottish Premiership team announced on Friday, July 16.

The 26-year-old forward has 15 goals this season.

“We are delighted to bring Kyogo Furuhashi to Celtic,” Postecoglou said. “He is a player of real quality and clearly someone I know well.

“I think he will add something special to our squad and I am sure the way he plays will excite our supporters. We look forward to welcoming him to Celtic.”

Furuhashi, the J. League’s monthly MVP for June, scored in the 30th minute in his final match with Vissel in a 1-1 away draw with Cerezo Osaka on Saturday, July 17.

Ohtani, who celebrated his 27th birthday on July 5, belted 13 home runs and batted. 390 in June, when he also won two games as an Angels starting pitcher.

Other winners of the “best of the best” monthly award in sports this year include Phil Mickelson (golf), Hideki Matsuyama (golf), Doncic, Naomi Osaka (tennis) and Patrick Mahomes (football).

“Our family wishes [Shohei] Ohtani the best of luck in his career, and we hope that he stays healthy and attains all of the goals that he has set for himself.”

ーTom Stevens, grandson of Babe Ruth, offering his thoughts on Ohtani in an interview with The Asahi Shimbun.

“People counted me out. They never thought I was going to make the Olympic team. They thought I was too old. I was past my prime a long time (ago). And I’m glad they say that, because they just motivate me. They give me that little fire.”

ーMarathon runner and five-time Olympian Abdi Abdirahman told USA Today. At age 44, he is the oldest U.S. runner to qualify for the Olympics. Abdirahman made his Olympic debut at the 2000 Sydney Games.

The Japan Sports Notebook will be on hiatus for a few weeks and return after the Tokyo Olympics.

Interested in submitting a news item for possible inclusion in the Japan Sports Notebook? Send an email with relevant information to e.odeven@japan-forward.com, or JAPAN Forward’s comment’s page or Facebook page and look for future editions of Japan Sports Notebook on our website.