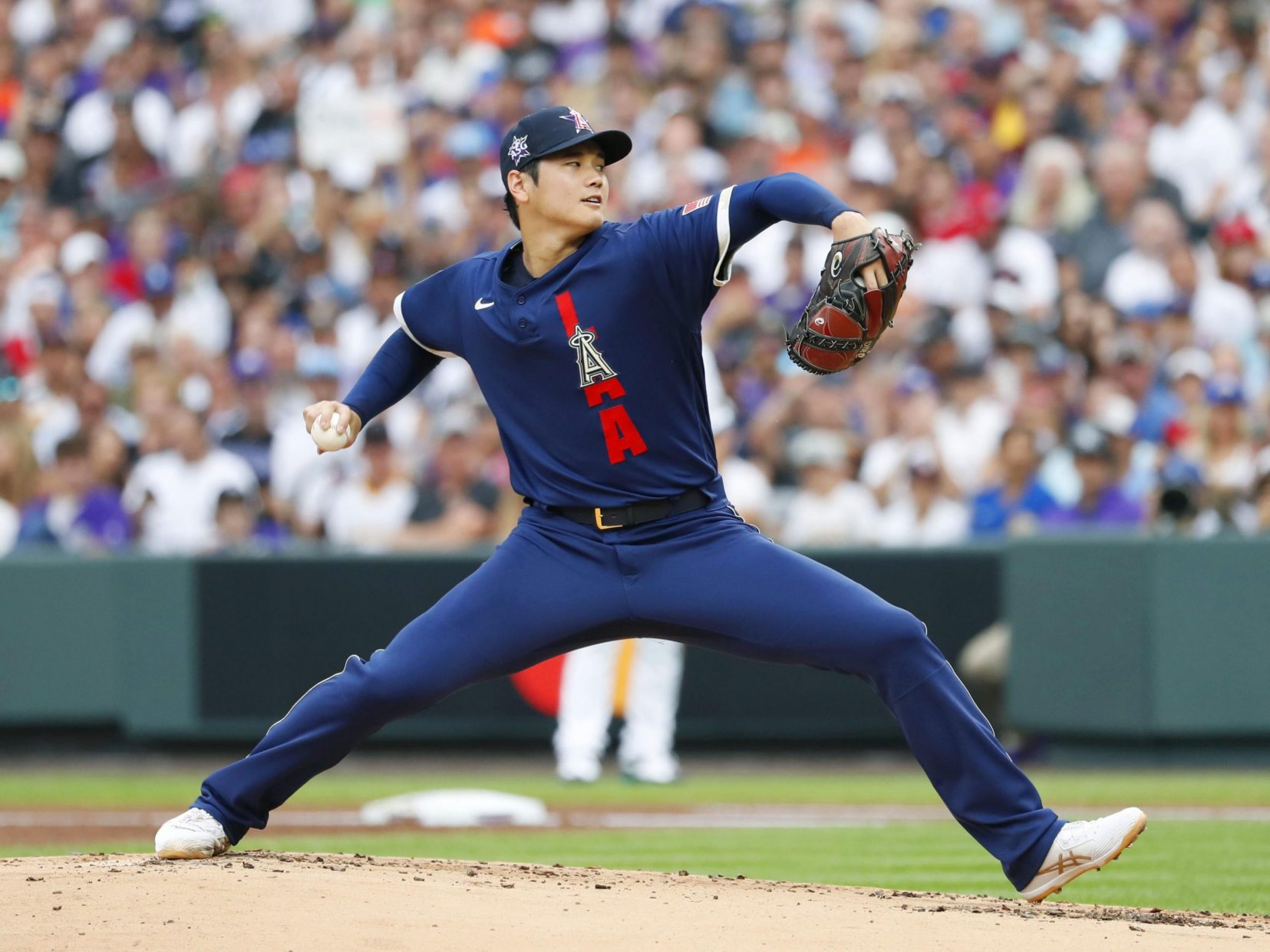 Despite a brief appearance on the mound, Ohtani was the winning pitcher in a 5-2  victory over the National League.

Penciled in the lineup as the AL designated hitter and starting pitcher, Ohtani led off the first inning in the 91st All-Star Game and thwacked Washington Nationals star Max Scherzer’s 0-1 cut fastball to Adam Frazier at second base for a groundout.

After exchanging his batting helmet, batting gloves and bat for his baseball cap and glove, Ohtani walked to the pitching mound and pitched to the NL’s Fernando Tatis Jr. (San Diego Padres), Max Muncy (Los Angeles Dodgers) and Nolan Arenado (St. Louis Cardinals) in the bottom of the first.

The hard-throwing right-hander, who became the second Japanese pitcher to start an All-Star Game following Hideo Nomo’s trailblazing appearance for the NL in 1995, explain his approach later.

“I was only going one inning, so I didn’t have to think about going further into the game,” Ohtani said later, according to published reports. “Just let it rip.”

Ohtani, reached 100.2 mph (161 kph) twice on the radar gun with his blazing fastball in the first. His first pitch was a 96.1 mph heater to Tatis, a 22-year-old Dominican who hit it out of play. The NL home-run leader (28, five less than Ohtani’s MLB-best total) was challenged by the 27-year-old starter from Oshu, Iwate Prefecture.

Ohtani recorded his first out when Tatis connected on a 1-2 slider, sending the ball flying out to left fielder Teoscar Hernandez.

Muncy and Arenado were then retired in order on infield groundouts.

Arenado saw Ohtani’s two fastest offerings on consecutive pitches, then grounded out on a split-fingered fastball.

Three up, three down.  (Watch Ohtani’s pitching highlights from the game here.)

What was it like facing Ohtani in this marquee event?

“He was as good as advertised,” Arenado told reporters. “His fastball had a little cut and he’s a really good player. Just incredible.”

Ohtani enjoyed the entire experience, calling it the “most memorable.”

“Obviously, I’ve never played in the playoffs or World Series, so once I do that, that’s probably going to surpass it,” he told reporters.

For Ohtani, his brief mound appearance was a small segment of the 3-hour game before a packed house of 49,184 fans at Coors Field in Denver.

Ohtani threw 10 of his 14 pitches for strikes.

He finished his brief pitching assignment without yielding a run, and before his replacement, Lance Lynn (Chicago White Sox), stepped on the pitching slab in the bottom of the second, the AL had taken a 1-0 lead.

The Jays’ Marcus Semien drove in New York Yankees fan favorite Aaron Judge, who reached on a walk and then moved within 90 feet of home on a Rafael Devers double to right. That made it 1-0.

The AL never trailed. Ohtani, therefore, was the AL’s pitcher of record and received the “W” next to his name on the box score.

“It was definitely more fun than nervous,” Ohtani was quoted as saying by MLB.com, a day after becoming the first Japanese to appear in the Home Run Derby.

“I definitely want to be back here at the All-Star Game. It was all equally fun. The experience of the last three days was definitely great.”

Before the spotlight shined brightly on him in the 91st All-Star Game, Ohtani arrived at the ballpark after getting a good night’s rest (he woke up at 10:30 a.m.).

A day after an entertaining yet exhausting duel with Nationals slugger Juan Soto in the first round of the Home Run Derby, Ohtani didn’t deliver another display of his power-hitting prowess. After his game-opening at-bat against the Washington Nationals right-hander, Ohtani grounded out to first in the third inning. He didn’t bat again after that.

AL Manager Kevin Cash’s squad tacked on another run in the third, two more in the fifth and a final run in the sixth.

The NL pulled within 4-1 in the fifth and added a final run in the sixth.

Asked for his impression of Ohtani, NL All-Star catcher J.T. Realmuto of the Philadelphia Phillies offered this assessment, according to MLB.com: “He’s an unbelievable ballplayer. The way he can succeed at both sides of the ball, it’s never been done before. It’s really fun for us to watch because I know how hard it is to do one side of the ball, and I get to work closely with the pitchers and see how much work they put into that side of it. The fact he has time to do both just blows my mind.”

Toronto superstar Vladimir Guerrero Jr., who crushed a 468-foot (142.6-meter) solo homer in the third inning was named All-Star Game MVP. Guerrero, at 22 years and 119 days, is the youngest MVP in the game’s rich history.

In a sign of the MLB’s changing of the guard, the rosters showcased a slew of first-time All-Stars (a record 40 players).

In the most recent All-Star Game, New York Yankees pitcher Masahiro Tanaka was the winner in 2019. Last year’s game was canceled due to the global pandemic.