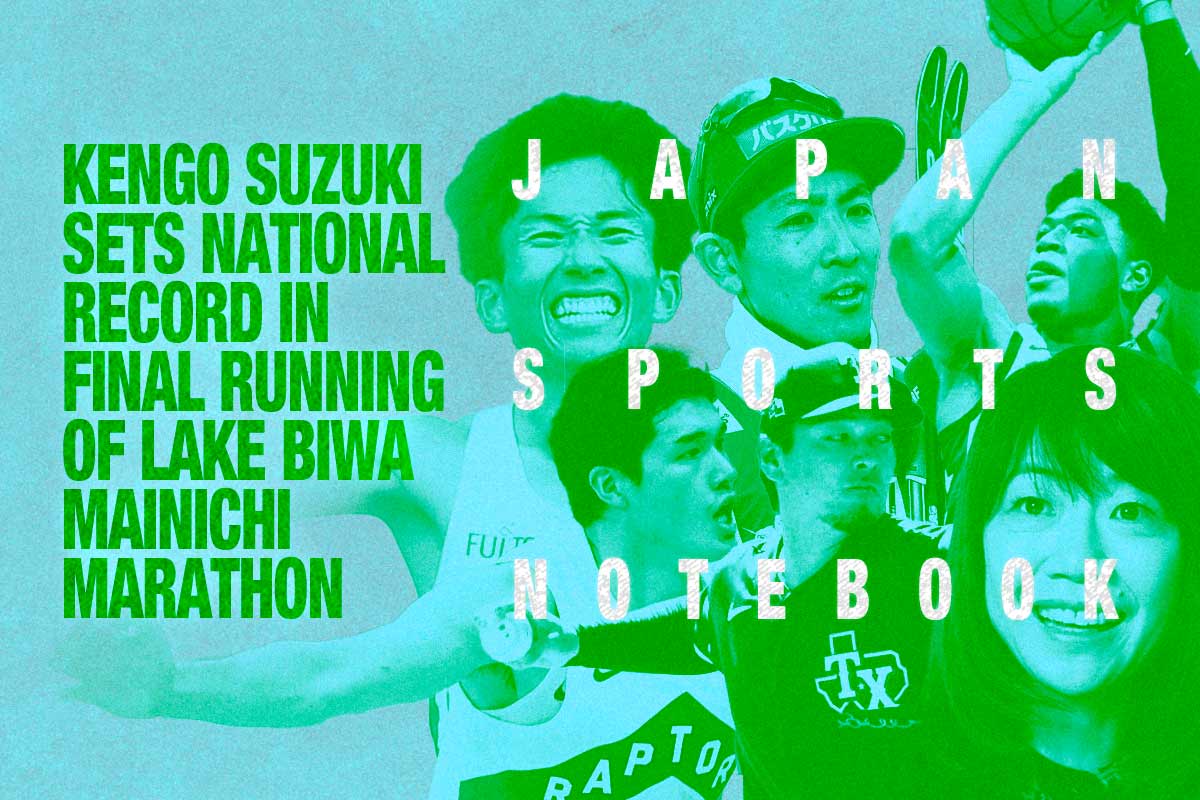 Kengo Suzuki made the 76th Lake Biwa Mainichi Marathon a spirited final hurrah, winning the race in style and establishing a national record at the same time on Sunday, February 28.

The 25-year-old Ehime Prefecture native completed the race in 2 hours, 4 minutes, 56 seconds. He shattered his previous personal-best time by more than 5 minutes on a day when the temperature was 7 C at the start of the race.

Suzuki, who placed 12th at last year's race in Shiga Prefecture, fell short of his goal of qualifying to represent Japan in the men's marathon at the Tokyo Olympics.

In the grand scheme of things, Suzuki's winning performance last weekend strengthened his resolve to keep working toward that goal in the future, with the 2024 Paris Olympics his target.

"In my other marathons to date I've slowed down in the last part, so the focus today was on finishing hard," Suzuki was quoted as saying by Kyodo News after his record-breaking run. "I knew that was the right time to make my move."

He added: "I hadn't thought I'd get a time like this. I'm as surprised as anyone. Winning the race was the thing I was going for.

"I felt I was unable to establish a rhythm over the first 10 kilometers, but after 20, 25 kilometers I found it. Up until now my pace has slackened after the midpoint, so I was hoping I could overcome that as I ran."

Suzuki, the 2017 National University Half Marathon champion, became the lone leader near the 36-km mark and finished strong.

"I've been training all along with that frustration (from last year) in mind," Suzuki, who previously held a top time of 2:10:21, told reporters. "I made careful use of speed and weight training. I was able to train well.

"I'm really proud to have set the Japan record in the last [edition of the] race."

The Lake Biwa Marathon, which will merge with the Osaka Marathon starting next year, was first held in 1946.

Arihara allowed five hits and issued one walk. He fanned two batters in 1 1/3 innings in a 5-5, six-inning tie.

After six seasons with NPB's Hokkaido Nippon Ham Fighters, Arihara joined the Rangers during the offseason.

Describing the experience of his first spring start, Arihara summed it up this way, according to The Dallas Morning News, through a translator: “I was definitely excited. It’s a new experience for me. But I still wasn’t able to execute the way I wanted to. So hopefully next time will be more fun.”

Arihara, who made 41 pitches before being pulled from the game, was disappointed that he didn't complete his second inning on the mound.

“Reactions aside, for me personally it’s not acceptable that I wasn’t able to finish the inning,” Arihara was quoted as saying by the Texas newspaper. “I hope next time, in the future, that it doesn’t happen again ー that I can finish the inning.”

Ohtani gave up three hits and a run. He also walked two batters

"Since this was my first game, I wasn't planning on letting it [top velocity] go in the beginning, especially early in counts," Ohtani told reporters through a translator. "As the game went on, I felt better and I started throwing harder, but I think that led to me cutting the ball a couple times, so it's something I have to work on."

Last season's National High School Baseball Invitational Tournament was canceled amidst the pandemic. For this year's event at Koshien Stadium, event organizers have instituted an attendance limit of 10,000 people per game.

Koshien organizers made the announcement on March 4.

The 93rd Spring Koshien tourney is slated to be held from March 19-31.

Naoko Takahashi, winner of the women's marathon at the 2000 Sydney Olympics, headlines a list of 12 new female members appointed to the Tokyo 2020 Organizing Committee's executive board.

With the dozen new appointees, there are now 19 women on the expanded 45-member board, it was announced on Wednesday, March 3.

New Tokyo 2020 President Seiko Hashimoto had targeted having the board comprising at least 40% women, according to published reports.

Information on the 12 new members is published in this press release.

The short-handed Raptors were without five players, including starters Pascal Siakam, O.G. Anunoby and Fred Van Vleet, due to COVID-19 restrictions, as well as head coach Nick Nurse and a quintet of team staff members.

The Pistons hammered the Raptors 129-105. The game was played in Tampa, Florida, where the Raptors are playing their home games this season due to international travel restrictions during the global pandemic.

Watanabe was scoreless in 11 minutes, but hauled in four rebounds. He finished 0-for-3 from the field, with a pair of missed 3-point attempts.

Speaking after the game, Watanabe discussed his hard-working mindset with reporters. He referenced Minnesota Timberwolves rookie Anthony Edwards' dunk over him on February 19, a play in which Watanabe tumbled to the floor and fouled the young star.

"Even if I get dunked on 99 times out of 100, I'll always jump if there's a chance I can block one," Watanabe remarked.

Although the NBA's Rising Stars Challenge was canceled this season, the league decided to have its assistant coaches select the 20 players for the U.S and World team rosters. The list is composed of first- and second-year NBA players, and Rui Hachimura of the Washington Wizards was selected for the World team for the second straight year, it was announced on March 3.

Hachimura is averaging 12.5 points, 5.4 rebounds and 1.7 assists in 27 games. In a recent entry on his blog, former NBA forward Tom Meschery wrote,  “Hachimura is a quintessential power forward with mid-range shooting skills.”


Evessa Coach Tennichi Back on Bench After Battling Malignant Lymphoma

Osaka Evessa head coach Kensauke Tennichi returned to the sideline for a game for the first time this season on Wednesday, March 3. The Evessa defeated the visiting Shinshu Brave Warriors 86-79 in the B. League match, and improved to 24-17 with the win.

Tennichi, 54, had worked remotely while recovering from malignant lymphoma and assisting acting head coach Akitomo Takeno since the 2020-21 campaign tipped off in October.

Takeno was glad to have his mentor Tennichi with him at the game.

It was good that Tennichi was able to win in his first game [back]," Takeno commented.

Takeno added: "It is mentally encouraging to have another person to consult with, so I will continue to cooperate with Tennichi."

Tominaga canned 11 of 16 long-range attempts and made 13 of 18 overall. (See game highlights here).

It was the first time the large-hill event was contested by women at a world championships.

Norwegian Maren Lundby claimed the gold with 296.6 points, followed by Takanashi (287.9) and Slovenia's Nika Kriznar with 287.1.

Though Takanashi's second jump was better than Lundy's, she was unable to overcome her point deficit after the first attempt. Lundy leaped 128 meters and 130.5 meters in succession. Takanashi soared 126 meters and 134 meters.

"My second jump was my best jump here [in Oberstdorf] so far," Takanashi, who grabbed the bronze medal in the normal-hill event last week, told reporters. "I'm glad I was able to end on a good note. I did all I can, and it was a good competition. I had fun."

Akito Watabe added another solid performance to his list of career achievements with a bronze-medal finish in the Nordic combined large hill individual Gundersen competition at the FIS Nordic World Ski Championships on Thursday, March 4.

Watabe was second in the jump portion of the competition (137.5 meters for 147.6 points) in Oberstdorf, Germany.

"I'm pretty happy to win a bronze medal today, but on the other hand, I'm a little disappointed with my cross-country performance," Watabe stated afterward.

"(I tried) to catch up to Lamparter, but his skiing was really great. It was so hard. I was totally empty at the end."

Gamba Osaka’s home match against the Kashima Antlers on Saturday, March 6 was postponed after five Gamba players had positive COVID-19 tests on Thursday, March 4, it was announced by the J. League on the same day.

ーYomiuri Giants legend Shigeo Nagashima, speaking to the team at Tokyo Dome on March 2 before a workout, according to the Yomiuri Shimbun.

“You have to stay focused on what you know. Your job is to find someone [like coaches and mentors] that you trust in and believe in. That is where your information is. And challenge them to answer questions that you are not sure about.”

ーTrack legend Carl Lewis, responding to a question from former Olympic hurdler Dai Tamesue about advice he'd give present-day athletes about the best way to prepare for competitions. They spoke during a recent online forum, organized by The Asahi Shimbun.