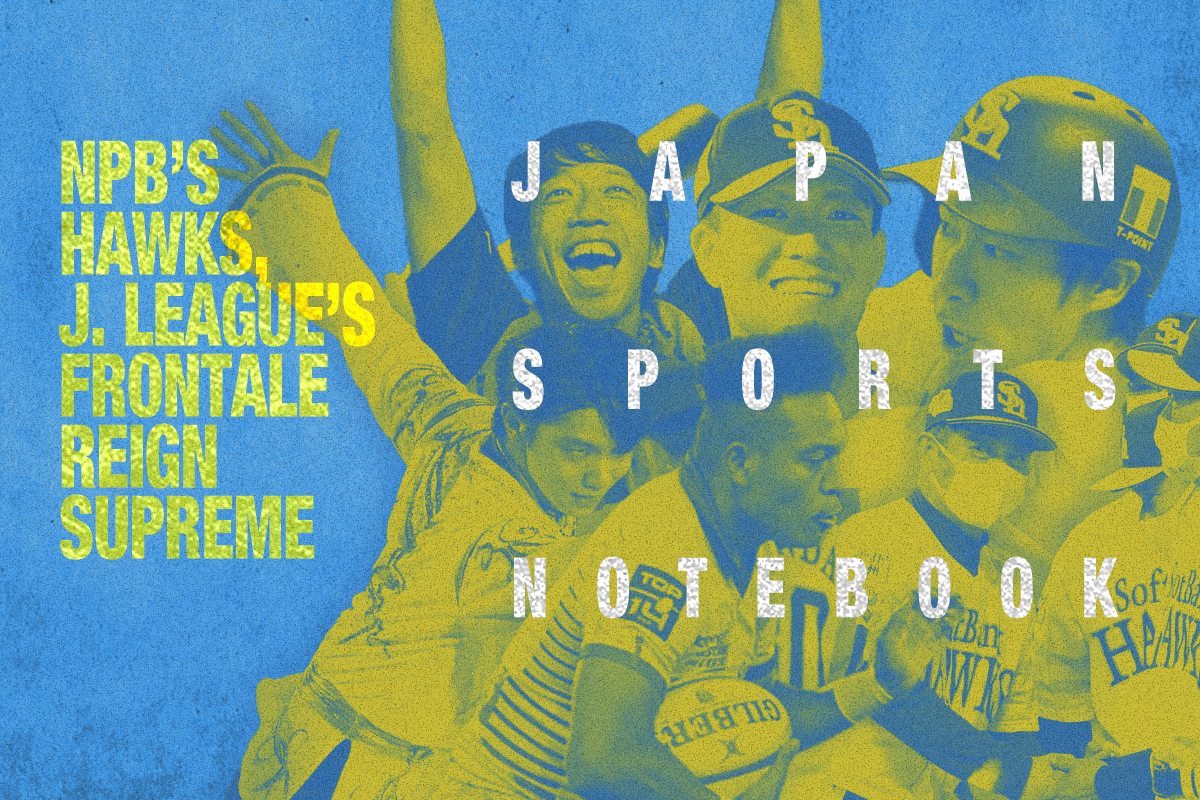 For starters, it surprised nobody that the Fukuoka SoftBank Hawks came out on top again, winning their fourth consecutive Japan Series title on Wednesday, November 25.

And on the same day, the Kawasaki Frontale secured their third J. League crown in manager Toru Oniki’s fourth season at the helm, with previous championships in 2017 and 2018. 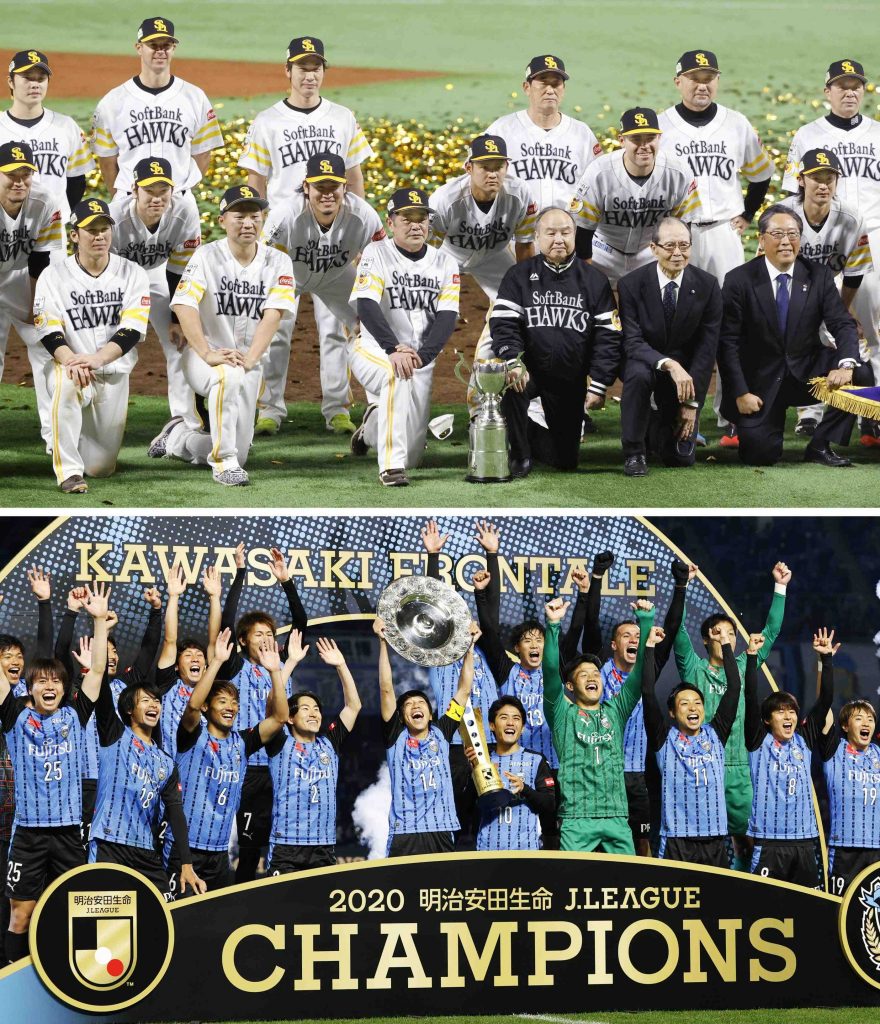 In their totality, the numbers paint a picture of an epic beatdown spread out over four games. The Hawks outscored the Giants 26-4 and outhit them 36-16. The Hawks set the tone for the title series early in each of the four games, outscoring the Giants 14-1 over the first three innings.

In other words, it was four games of misery for Tatsunori Hara’s team. 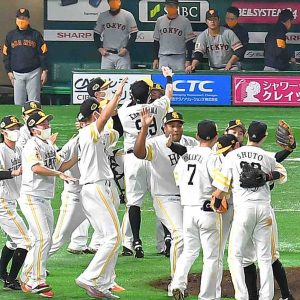 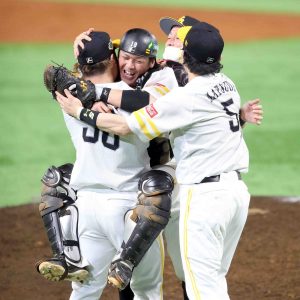 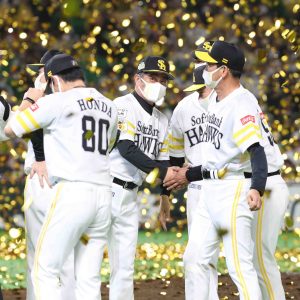 The Hawks celebrate after sweeping the Giants in the Japan Series on November 25.

The championship series then shifted to PayPal Dome in Fukuoka, and the Hawks made mince meat out of their Central League foe, winning 4-0 on Tuesday, November 24 and 4-1 in the title-clinching Game 4 on November 25. 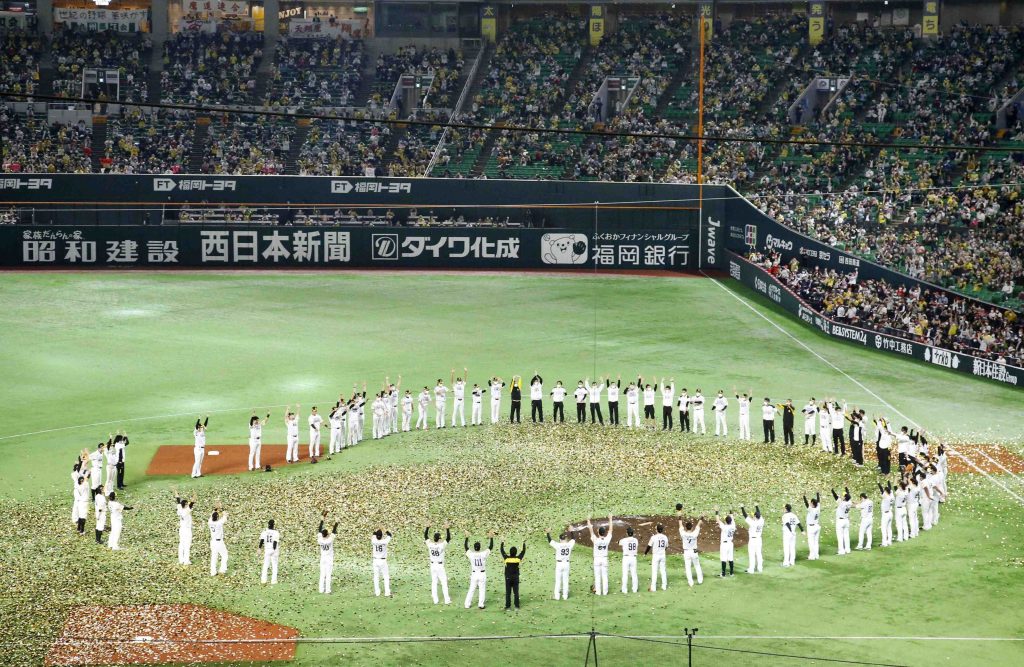 Another season, another title for the Hawks.

With their fourth consecutive championship, the Hawks became the first PL club to accomplish the feat.

The Giants hold the NPB record for consecutive Japan Series crowns with nine (1965-73) during the Shigeo Nagashima-Sadaharu Oh era. 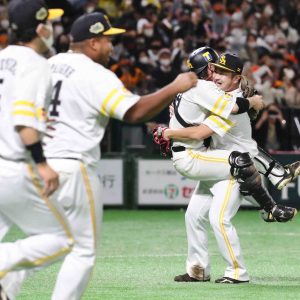 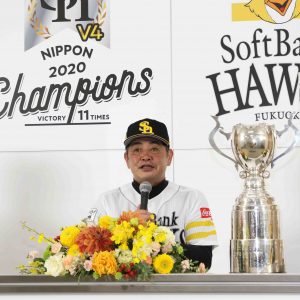 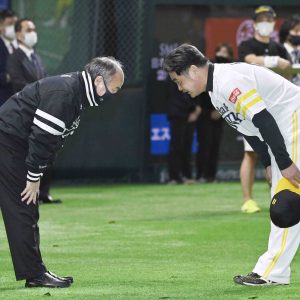 Kimiyasu Kudo (above, center) has guided the Hawks to five Japan Series titles since being appointed as Hawks manager in 2015.

So what defined the Hawks’ performance during their four-game sweep?

Splendid pitching and timely hitting provided a common thread throughout the four games.

In Game 1, Hawks ace Kodai Senga took the mound for the fourth consecutive Japan Series opener. He didn’t disappoint the team’s fans, tossing seven innings of scoreless ball and scattering three hits while striking out six. Slugger Ryoya Kurihara excelled at the plate, going 3-for-3 with the national spotlight on his team. 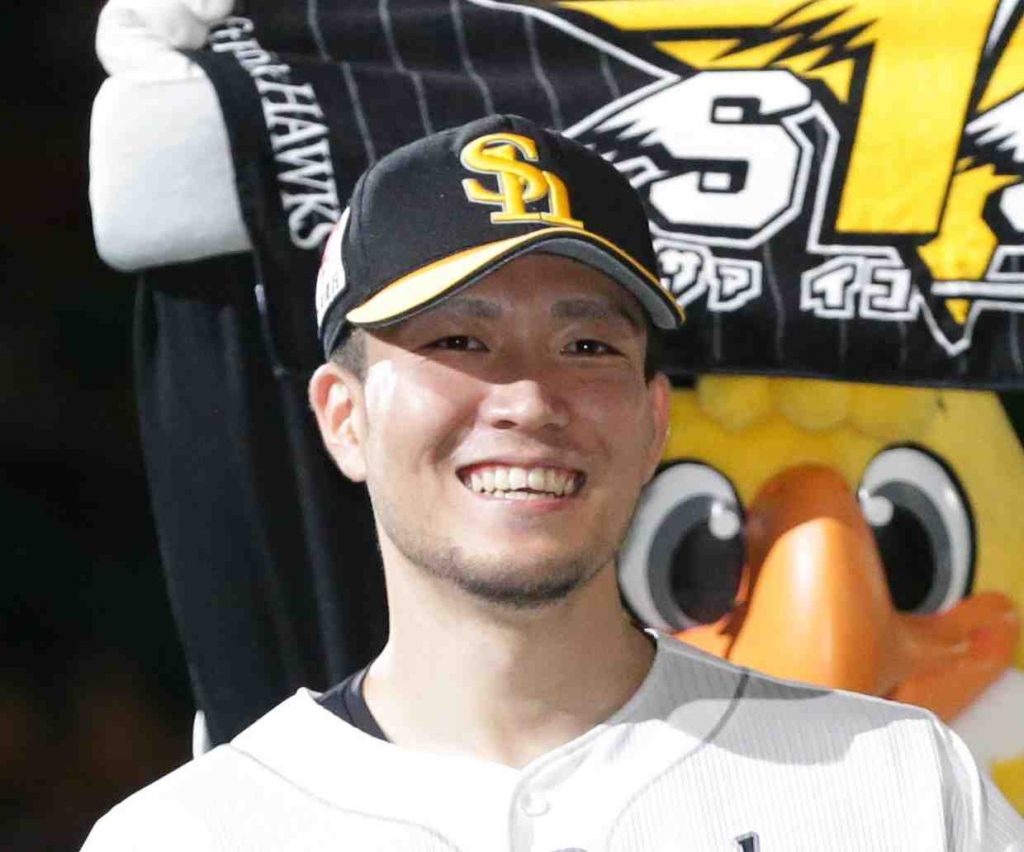 Kurihara, an outfielder, bashed a two-run homer in the second inning to set the tone for the Hawks, then added a two-run double, also off Giants starter Tomoyuki Sugano, who was 14-2 in the regular season. Kurihara finished the game 3-for-3 with four RBIs and a walk.

Describing his homer, which came on a 2-0 slider, Kurihara said, according to Kyodo News: “I was just so nervous. I was thinking to just put as good a swing as I could on the first strike I saw.”

In Game 2, SoftBank’s offense pounded out 15 hits, including the 24-year-old Kurihara’s four-hit effort. Alfredo Despaigne smacked a grand slam in the seventh and had six RBIs in the rout.

The Hawks jumped out to a 3-0 lead in the first inning and never looked back.

“Getting runs in the first inning was big, our players were all aiming to keep the offense going at at-bats and that led to the win today,” Kudo told reporters after the game.

Then, possessing a 2-0 series advantage and playing in front of their home fans in Fukuoka, the Hawks demonstrated their championship pedigree in a pair of methodical midweek victories.

In Game 3, southpaw starter Matt Moore worked seven no-hit innings before making way for the Hawks’ steady relief corps. Akira Nakamura had the big performance among the Hawks’ batters, connecting on a two-run homer off Angel Sanchez in the third inning and adding a run-scoring single for good measure.

Kudo addressed the issue of why he yanked Moore from the game despite the fact that he had a no-hitter going.

“Moore really pitched well for us, and the defense, with the exception of the error to open the game, was solid,” Kudo was quoted as saying by Kyodo News. “But I could see he [Moore] was a little fatigued, and our priority is winning—and if possible winning in front of our fans here.”

The Giants only managed one hit, a Yoshihiro Maru single off closer Yuito Mori with two outs in the ninth.

In Game 4, it was more of the same, with established stars stepping up for the Hawks and putting their stamp on the game. Yuki Yanagita and Takuya Kai each hit two-run homers in the series finale. Yanagita’s blast put his club in front 2-1 in the first inning and Kai followed with his round-tripper in the next frame. 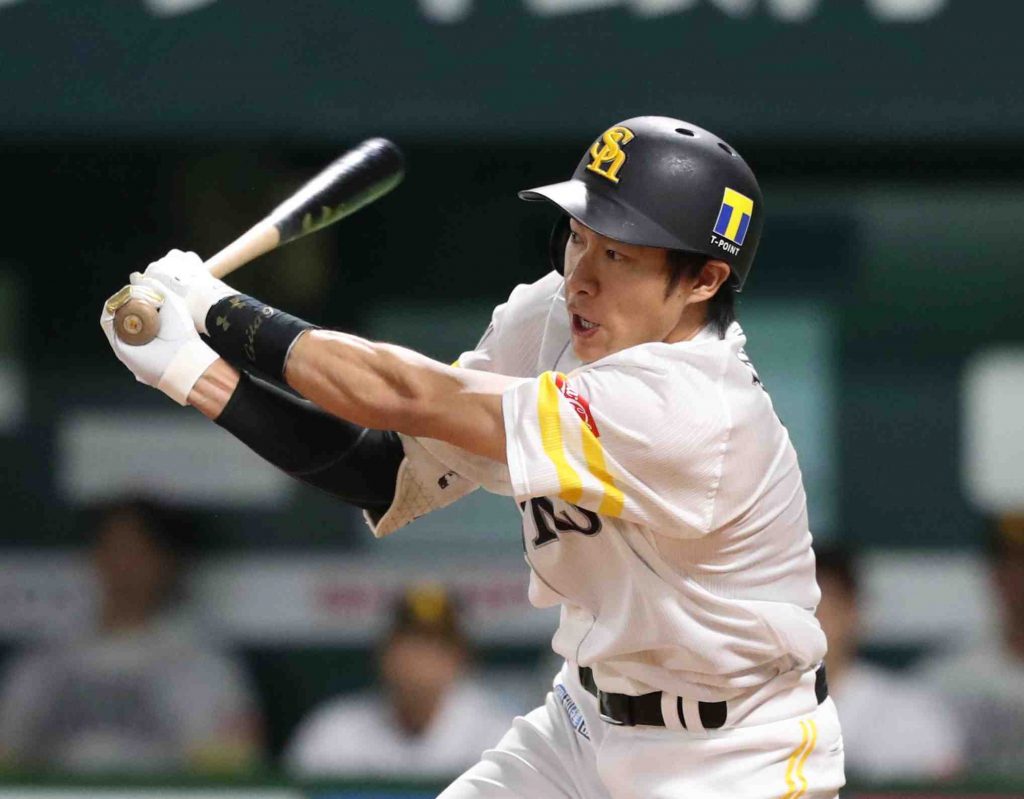 Reliever Yuki Matsumoto replaced Hawks starter Tsuyoshi Wada, who labored through the first two innings, in the third and Kudo’s move paid off. Matsumoto was effective in keeping the Giants off the scoreboard again, striking out four over 2 2/3 innings. Dependable closer Mori, the Hawks’ sixth relief pitcher on the night, slammed the door on the Giants in the ninth as the Hawks completed their COVID-19-delayed season-long mission.

“Last year we won and aimed to become the best in Japan for the fourth straight year,” Kudo said in the aftermath of another title-winning effort, according to Kyodo News. “With that goal in mind, the beginning of the season was tough but we played hard, won, and won the league title, and that dream of four consecutive wins actually came true.”

Kurihara was named Japan Series MVP after a pair of impressive offensive outings in Games 1 and 2. 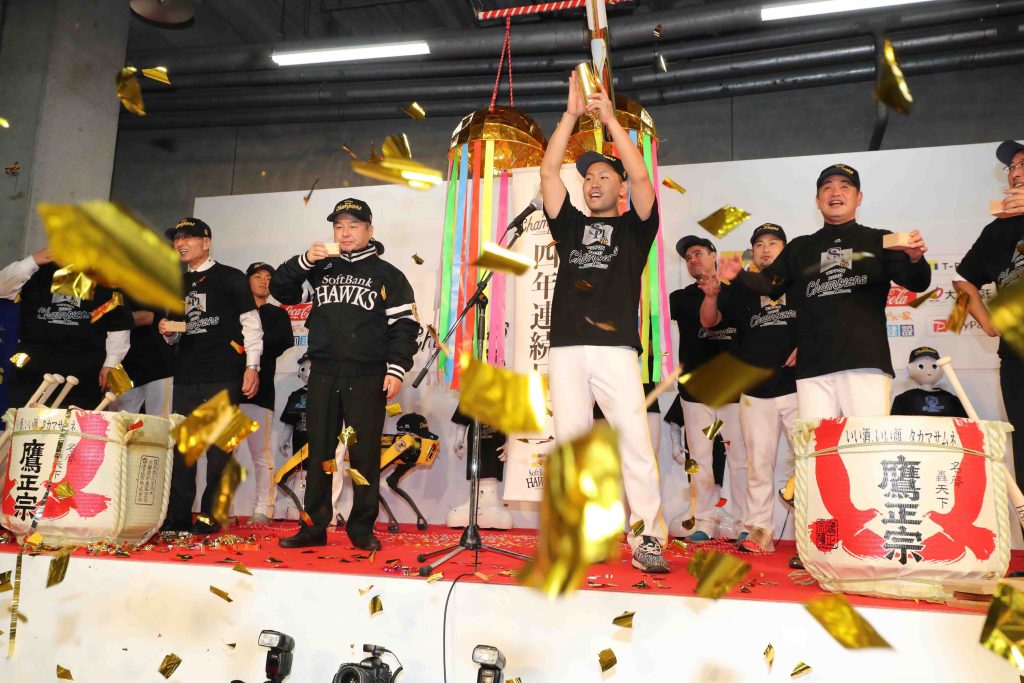 Championship celebrations are nothing new for the Hawks over the past decade.

With a record 16 straight Japan Series wins at home and 12 consecutive Japan Series victories, the Hawks dynasty is alive and potent as ever.

They have no apparent weaknesses and will be the overwhelming favorite to win the Japan Series once again in 2021. 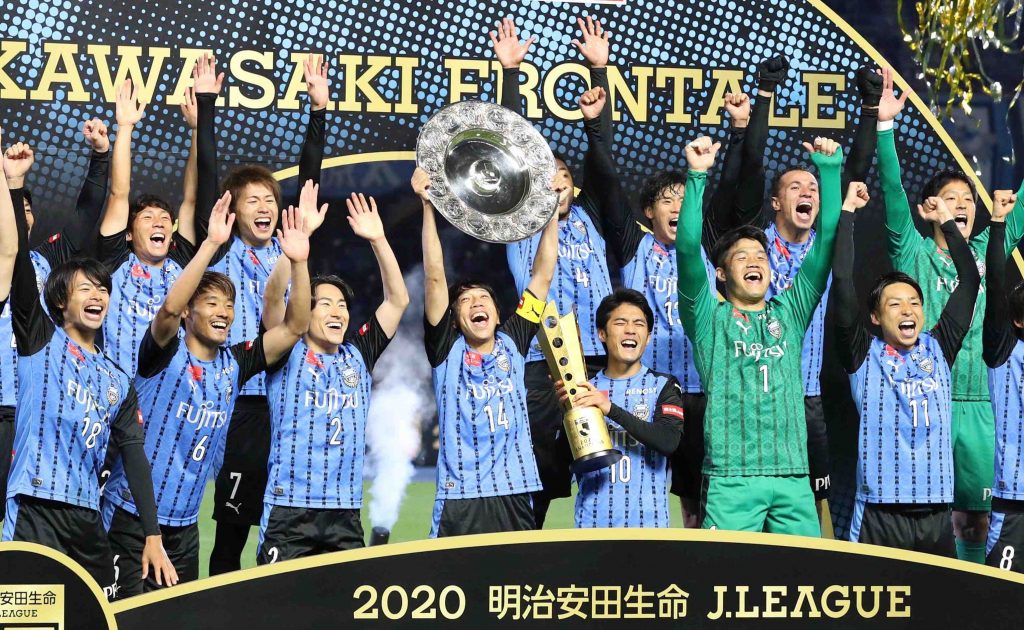 The lopsided victory came with four soccer matches remaining on the schedule for Kawasaki this season. Frontale secured an insurmountable lead at the top of the J. League table, with Oniki’s men winning for the 24th time in 30 matches. Their splendid season also includes three draws and three losses and 75 points, while second-place Gamba (18-4-8) had 58 points entering the weekend.

Brazilian forward Leando Damiao gave Frontale a 1-0 lead in the 22nd minute before Ienaga’s heroics dominated the proceedings for the hosts. 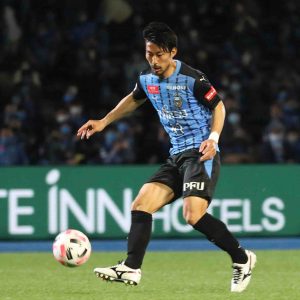 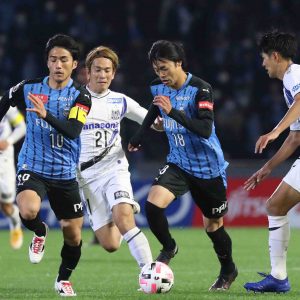 A 12-match winning streak propelled Frontale this season as players, including Manabu Saito (19) and Ryota Oshima (10), worked together and produced successful results.

There were more offensive fireworks for Frontale before the final whistle, with Manabu Saito finding his target on a breakaway in the 90th minute.

It was a marvelous performance for Saito and his teammates.

When it was over, the joyful player’s emotions were on display for all to see.

“I wish this day would never end. That’s how happy I feel,” Ienaga was quoted as saying by Kyodo News. 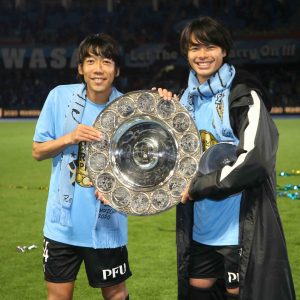 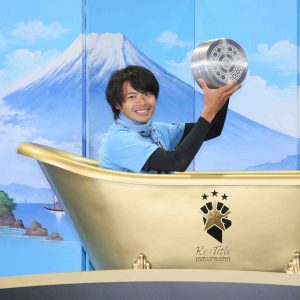 Wrapping up the title without the pressure of having to win any of their final four matches gives Frontale additional time to celebrate departing midfielder Kengo Nakamura’s impending retirement.

Nakamura, 40, announced on November 1 that this would be his final season. The 2016 J. League MVP has spent his entire career with Frontale, starting in 2003.

But before he hangs up his spikes, Nakamura took some time to explain what he considers the key ingredient for his team’s success.

“We developed a mental toughness that became a foundation of our club and is part of the current team,” Nakamura told Kyodo News.

Mental strength and consistent excellence on the pitch produced a sensational run for Frontale, who enjoyed a 12-match winning streak entering November.

Oniki’s club saw the streak end with a 2-0 loss to Consadole Sapporo on November 3, and then Frontale had mixed results (1-1 tie, 3-1 victory and 1-0 loss) over their next three games before their exclamation-point triumph over Gamba. 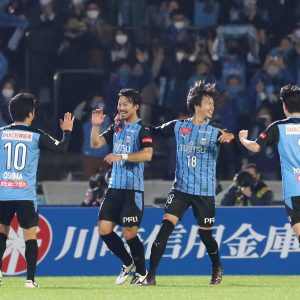 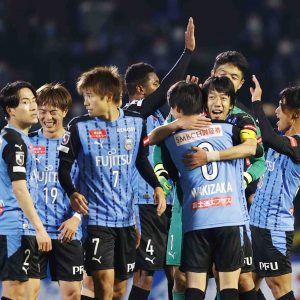 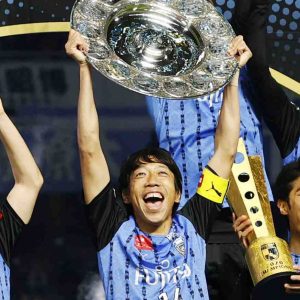 The thrill of victory has been a recurring theme for Kawasaki Frontale this season.

Frontale will wrap up their title-winning season on December 19 with an away match against Kashiwa Reysol. 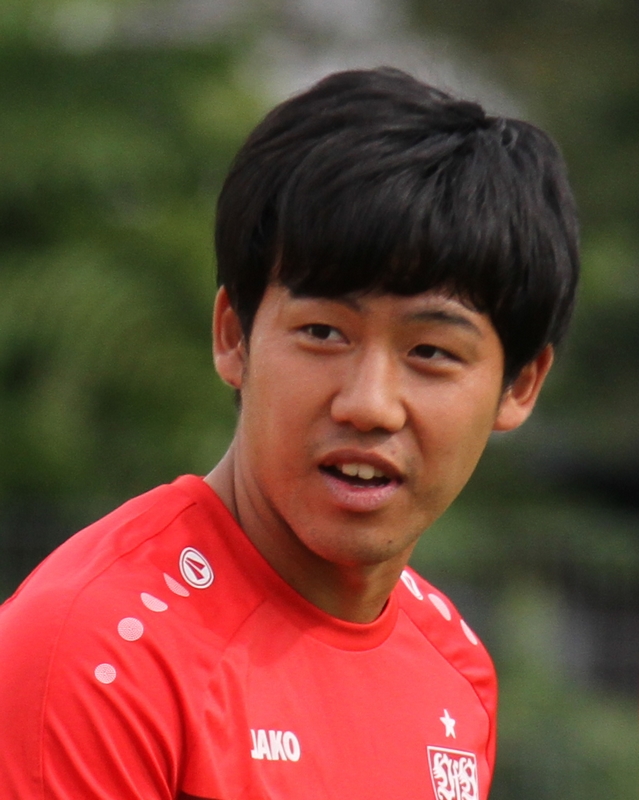 The 27-year-old Endo made his debut with Stuttgart in August 2019 after joining the club on a season-long loan.

“I’m very happy about the contract extension and I’m looking forward to more years with VfB Stuttgart,” Endo said in a statement. “I feel very happy here and I want to do my bit to help us achieve our goals.”

“With his technical qualities but also his mentality and professional attitude, Wataru is a leading player in every sense of the word,” said Stuttgart sporting director Sven Mislintat. “He’s committed to VfB, to our path and to the way we want to play football. We’re therefore delighted to have extended his contract early and we thank Wataru for his trust.” 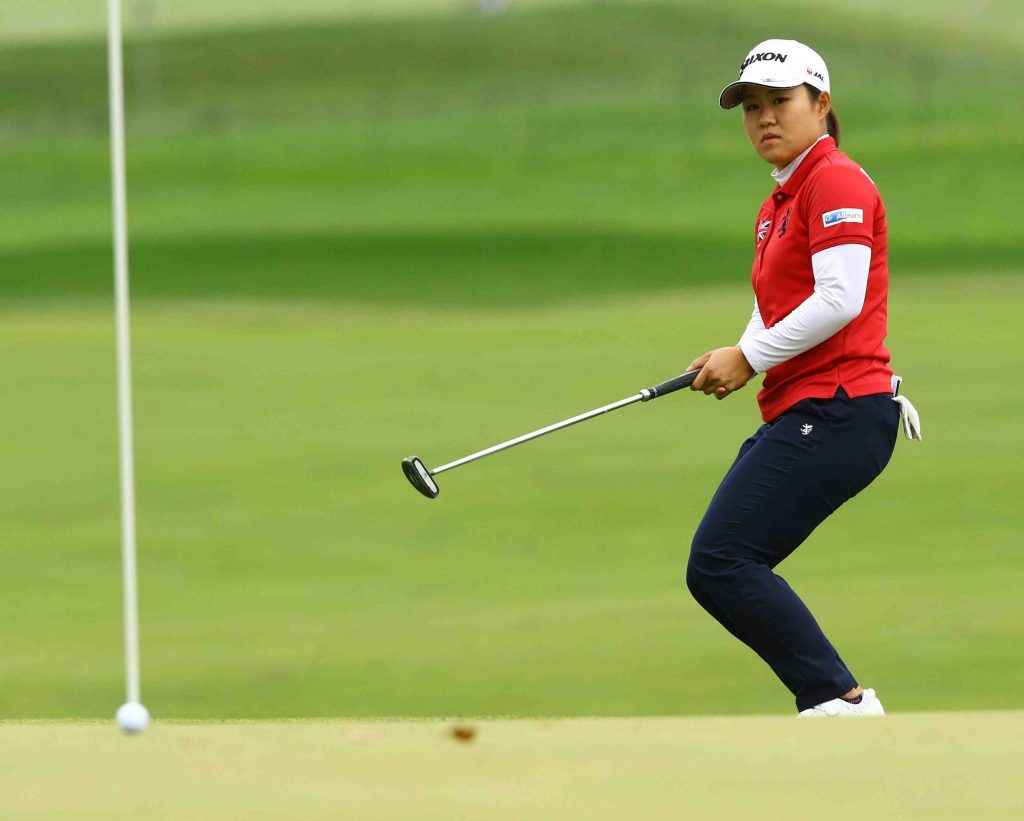 In the latest Rolex Rankings for women’s pro golf, which were released on Monday, November 23, Nasa Hataoka fell to No. 7.

Hataoka was sixth in the previous world rankings.

South Korea’s Jin Young Ko and Sei Young Kim are first and second, respectively, in the updated rankings, followed by Americans Nelly Korda and Danielle Kang at Nos. 3 and 4, Korean Inbee Park is fifth and Canadian Brooke Henderson is sixth. 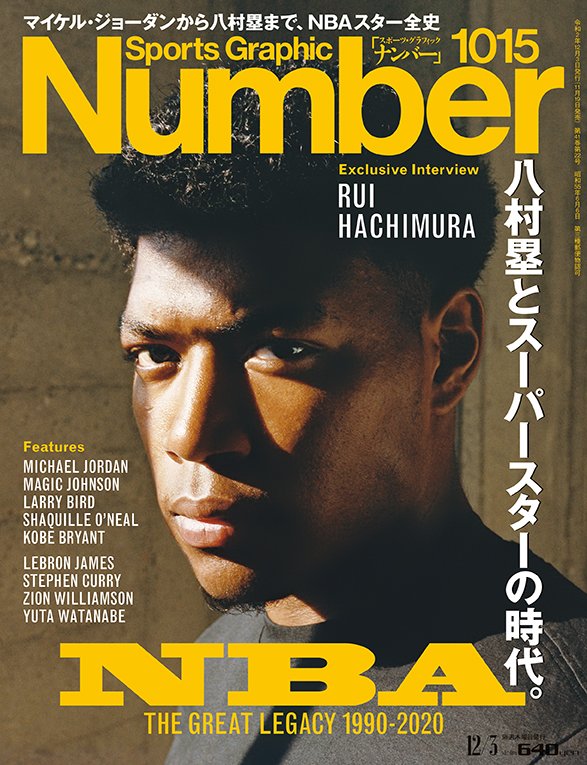 Washington Wizards forward Rui Hachimura appears on the cover of the latest issue of Sports Graphic Number magazine, which is now available at convenience stores and book shops throughout Japan.

In an exclusive interview, the Toyama Prefecture native discusses his basketball career to date and influences. In addition, Hachimura recounts meeting NBA legend Michael Jordan while he was a high school student. 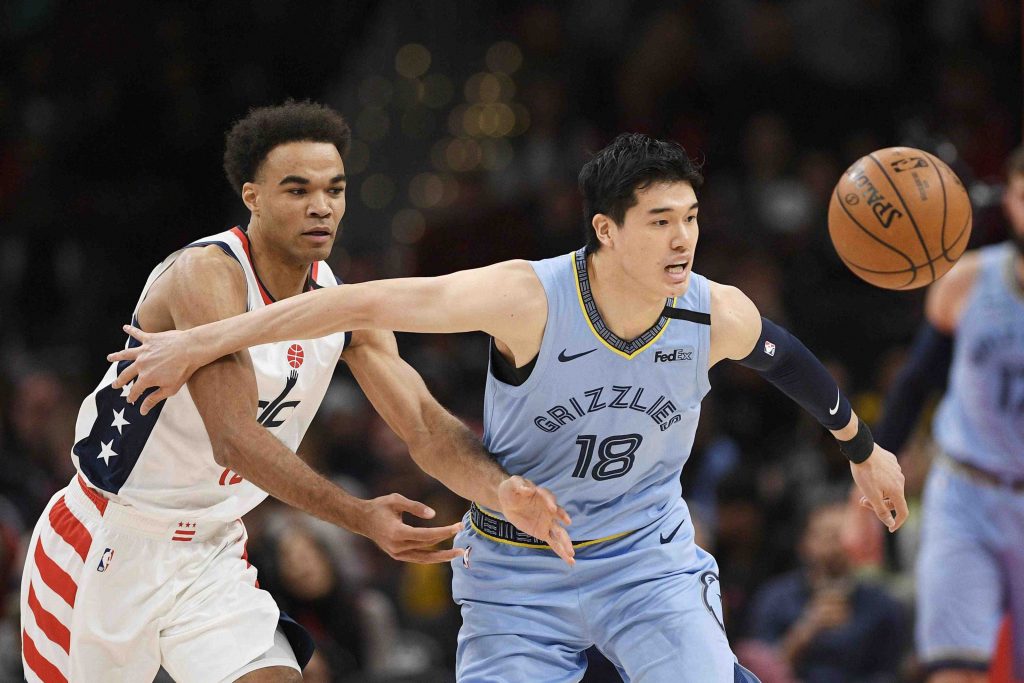 Yuta Watanabe split time between the Memphis Grizzlies and the NBA G League’s Memphis Hustle the past two seasons.

Free agent forward Yuta Watanabe has received an invitation to the Toronto Raptors training camp, a possible path to signing a contract with the NBA’s 2018-19 champions.

Watanabe suited up for the Memphis Grizzlies and their NBA G League affiliate (Memphis Hustle) over the past two seasons, playing in a total of 33 NBA games.

The versatile defender and left-handed shooter thrived in the G League last season as he demonstrated that he had adjusted to its style of play. Watanabe averaged 16.2 points, 6.0 rebounds, 1.9 assists, 1.0 blocks and 0.9 steals in 22 games for the Hustle.

If Watanabe accepts the invitation, he’ll begin preparations for Raptors training camp, which begins on December 1. 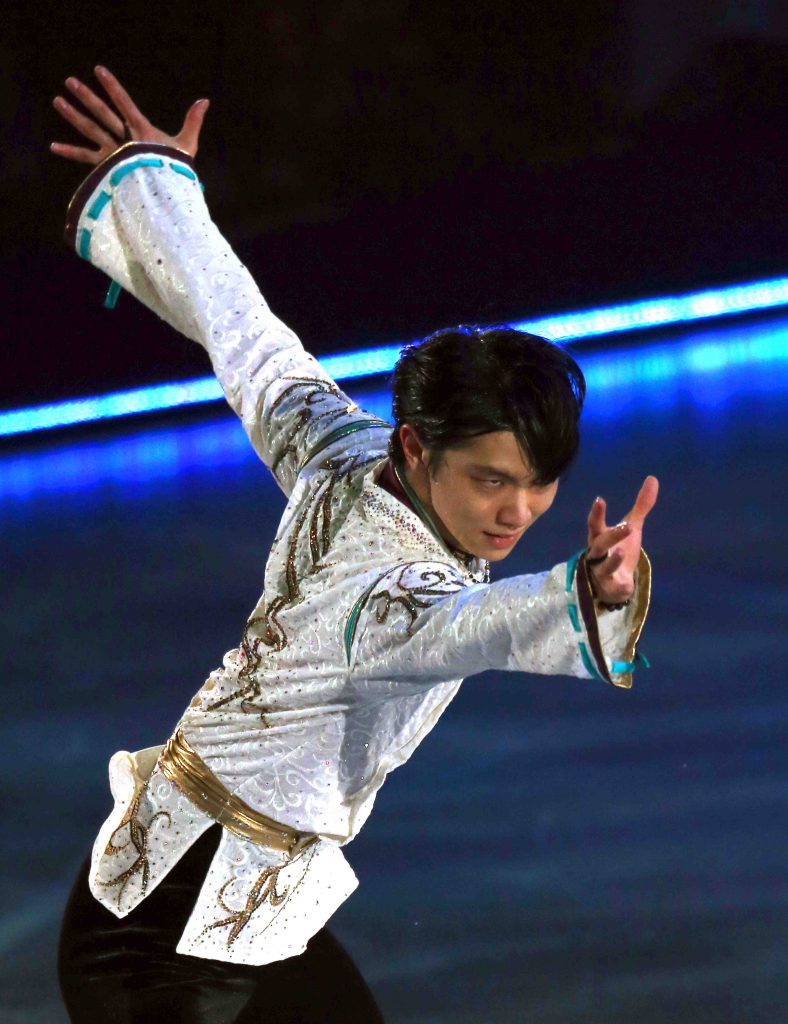 Yuzuru Hanyu is preparing to participate at next month’s national championships.

Hanyu to Compete at Nationals


Yuzuru Hanyu is set to compete at the upcoming Japan national championships, the Japan Skating Federation announced on Wednesday, November 25.

The event will be held December 25-27 in Nagano.

Clermont’s Kotaro Matsushima, seen in a file photo, scored a try in a Top 14 match on November 27.

After scoring the try, Matsushima, who starred for Japan in the 2019 Rugby World Cup, was replaced by a substitute. At that point, Clermont held a 38-14 lead.