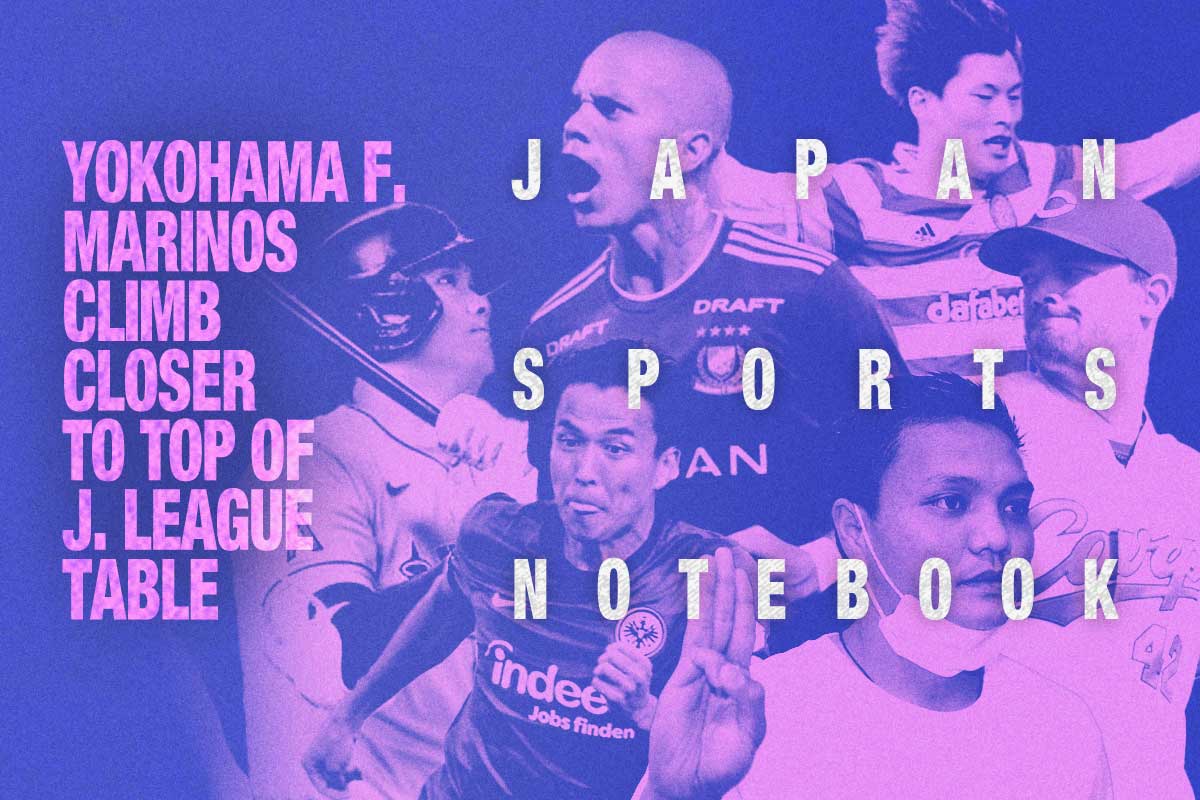 The results have been impressive: four wins and one draw in five matches under Muscat.

In the past week, Marinos pulverized Oita Trinita 5-1 on Sunday, August 15, with Daizen Maeda providing the big offensive spark with a three-goal performance as the team ran its unbeaten streak to 11.

“The next one is the most important game so we’ll focus on the next one,” noted Muscat, according to Kyodo News, “not the 11 behind us.”

That focus was clearly there. Yokohama followed up that effort by trouncing visiting Vegalta Sendai 5-0 on Saturday, August 21, with Leo Ceara notching a hat trick in the rout and Marcus Junior and Jun Amano both scoring once.

Leo Ceara, who opened the scoring in the 26th minute on a header, was pleased with the result.

“I stayed brave and just threw myself for the first goal, I’m glad with my second as I hit a great effort. The third was a good combination with Marcos,” Leo Ceara said later, according to Kyodo News.

Since a 1-1 draw with Kashiwa Reysol on May 22, Marinos have not lost a J. League match.

The unbeaten streak includes a pair of 1-0 victories, three 2-0 wins and a 2-2 tie with Shimizu S-Pulse on August 9.

Maeda, 23, is second in the league in goals (13) through August 21, trailing only Leandro Damiao of the reigning champion Kawasaki Frontale. Damiao has 14 goals.

In a four-game stretch in March, Maeda bagged six goals. His dynamic effort against Trinita produced his first hat trick of the 2021 campaign. He also represented Japan on the soccer field during the Tokyo Olympics, and put the ball in the net against France.

Blessed with talented skills on offense, Maeda could be an X-factor for title-chasing Yokohama as it seeks to dethrone Kawasaki.

Frontale played to a 1-1 draw with Sanfrecce Hiroshima on Saturday, missing out on a chance to pick up the maximum three points for a win, but keeping their unbeaten season alive.

Eintracht Frankfurt defensive midfielder Makoto Hasebe was recognized for his longevity in the German Bundesliga this week, earning appointment to the Bundesliga Legends Network on Thursday, August 19.

As a member of the Bundesliga Legends Network, the former Japan national team captain will be involved in various events to help promote the league around the world. Jurgen Klinsmann and Philip Lahm were also added as new members of the fraternity, which launched in 2017.

“It is an honor for me to be part of the Bundesliga legends,” the 37-year-old Hasebe wrote in an Instagram post. “Bundesliga legends are just great players and I’m proud that my name is one of them.”

Myanmar goalkeeper Pyae Lyan Aung, a vocal opponent of the coup in his homeland in February, has been granted long-term residence status, it was announced on Friday, August 20.

The decision of the Immigration Services Agency of Japan to approve a five-year visa for him sparked an outpouring of gratitude from Pyae Lyan Aung.

“I am grateful to the Japanese people, the Japanese government and everyone who has supported me so far. I am relieved,” he was quoted as saying by Kyodo News at the Osaka Regional Immigration Services Bureau on the same day.

In July, he received a six-month designated activities visa allowing him to remain in Japan. The 27-year-old joined the J. League third-division club YSCC Yokohama as a trainee.

Pyae Lyan Aung arrived in Japan in May to play in a pair of World Cup qualifiers.

When the Myanmar national team was preparing to return home on June 16, he informed immigration officials at Kansai Airport in Osaka that he wanted to stay in Japan due to the crisis in Myanmar. As a result, Pyae Lyan Aung applied for refugee status.

Veteran left-hander Kris Johnson, who had four double-digit win seasons during his six years with the Hiroshima Carp, announced his retirement as a player on Wednesday, August 18.

Johnson compiled a 57-37 won-loss record and an impressive 2.76 ERA with the Carp. Before joining the Carp, Johnson, who began his pro career in 2006, pitched for the Pittsburgh Pirates in 2013 and the Minnesota Twins the next year.

“The Carp have helped me a lot in achieving the baseball career I’ve dreamed of since I was a kid,” Johnson said in a statement issued by the Carp. “And I’m proud to retire as a Hiroshima Toyo Carp player. ”

He continued: “I am looking forward to the day when I will come back to Japan and visit Hiroshima to watch the Carp game. Thank you for your wonderful memories.”

The teammates both began their baseball careers in their native Cuba.

With Rodriguez on the hill, the Dragons dropped a 6-1 decision to the Yomiuri Giants at Tokyo Dome. Rodriguez (0-2 this season), who scored the visitors’ lone run, took the loss after yielding five hits and four runs over five-plus innings. He walked three and struck out five.

NPB’s last foreign pitcher-catcher combo in the same game occurred on June 8, 1991, when Taiwanese pitcher Shen-hsiung Chuang and American-born catcher Mike Diaz competed for the Lotte Orions. (Later that year, Chuang became a naturalized Japanese citizen. He changed his name to Katsuo So.)

Martinez, 25, appeared in 39 games for Chunichi in 2020 and batted .295 in his first NPB season. He signed a developmental contract with the Central League club in 2018 and played exclusively in the organization’s farm system for two years.

The language barrier shared by players who speak a different native tongue is considered an obstacle to having effective communication between the pitcher and catcher.

Dragons manager Tsuyoshi Yoda recognizes that Rodriguez and Martinez have a natural rapport.

“I think the [battery] compatibility was good,” Yoda told Chunichi Sports after the game.

August 18 was another day that reminded baseball fans of Shohei Ohtani’s unique skills.

The Los Angeles Angels star whacked his MLB-leading 40th home run of the season in the eighth inning against the Detroit Tigers. His 131-meter (430-foot) blast extended his single-season record for the most homers by a Japanese player in the majors.

“At that point, I wasn’t sure I was going to pitch the ninth, so I wanted to give myself another run,” Ohtani told reporters after the game. “That’s big for me and the team.”

The Angels defeated the Tigers 3-1, and Ohtani improved to 8-1. He pitched eight innings and allowed six hits and one run. He struck out eight and didn’t walk a batter.

Angels manager Joe Maddon remains quite impressed with how Ohtani has performed this season in all facets of the game.

“I don’t know what you can say about him that hasn’t been said before,” Maddon said after the game, according to The Associated Press. “He’s not going to win the Triple Crown, but he’s in the discussion for everything else. If you are a Cy Young or MVP voter, your eyes have to be wide open at this point.”

Heavy rains in the Kansai Region forced six days of games to be postponed, pushing the final back several days at Koshien Stadium in Nishinomiya, Hyogo Prefecture.

The COVID-19 pandemic forced Miyazaki Commercial High School to withdraw from the tournament, which started on August 10, after 13 team members tested positive for the coronavirus. The school pulled out of the tournament on Tuesday, August 17.

“I truly feel sorry for my team members because they can’t play at Koshien. It’s extremely disappointing,” Miyazaki Commercial High School head coach Mitsuro Hashiguchi was quoted as saying by The Asahi Shimbun.

Miyagi Prefecture’s Tohoku Gakuin High School also pulled out of the event on August 17 after one of its players tested positive.

For the second straight year, the Japanese Grand Prix will not be held in Suzuka, Mie Prefecture, organizers announced on Wednesday. Organizers cited the COVID-19 pandemic as the reason to call off the event.

The race was scheduled to be held on October 10.

“Following ongoing discussions with the promoter and authorities in Japan the decision has been taken by the Japanese government to cancel the race this season due to ongoing complexities of the pandemic in the country,” Formula One said in a statement.

Tokyo Grand Slam, a major event on the International Judo Federation calendar, has been canceled for the second year in a row because of the global pandemic, according to published reports on Tuesday, August 17.

The meet was scheduled to be held December 3-5.

“He’s the type of player supporters want to watch and he feeds off their energy.”

ーCeltic manager Ange Postecoglou on forward Kyogo Furuhashi after the team’s 3-2 victory over Hearts in the Premier Sports Cup on August 15. Furuhashi, who left Vissel Kobe to join Celtic, scored his fifth goal in five games since joining his new club.

“I have been a dog owner my whole life, and believe our city can do more to protect and nurture our furry friends. As mayor I will invest in our shelters, dog parks and public spaces to make them as pet-safe as possible.”

ーBobby Valentine, a former Chiba Lotte Marines and MLB manager who is running for mayor as an unaffiliated candidate in his hometown, Stamford, Connecticut, tweeted.