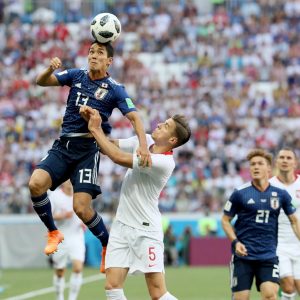 Samurai Blue faced Group H favorites Poland in the last game of the round matches on Thursday, June 28. Although the Whites and Reds have had a tough World Cup campaign, they were able to snatch a consolation victory from Japan in Volgograd, but still sadly exited the tournament. It was also the first time Poland won against Japan, losing 0-2 in 2002, and 0-5 in 1996.

If we had to describe the game with a word, it would be frustration. Japan did not fare here as well as they did in their games against Columbia and Senegal. Their lack of defense came to the fore once more, fundamentally handing a golden opportunity to Poland. Fans were also left confused as to why three of the goal scorers—Kagawa, Osako, and Inui—did not start the game. Finally, Poland were galvanized by the fact that they had nothing to lose, making them all the more determined to win the game against Samurai Blue.

The game started out slow. At the 13th minute Shinji Okazaki tried to dive for the ball, and at the 14th Yoshinori Muto shot a low ball, but failed to score. Despite the efforts, the Japanese offense failed to convert scoring chances.

On the Polish side, although they seemed to be searching for opportunities more than Japan, they still failed to net a goal. Their efforts were aptly hindered by the Japanese goalkeeper Kawashima, who delivered a spectacular save where the ball had half passed the goal line but was clawed out just in time at the 33th minute.

Overall, an uneventful first half, and the two teams finished level, with five failed shots apiece.

On to the second half, fans were left hoping that things would get better when goal scorer Osako was subbed in. However, Japan’s play remained somewhat ineffective, and their defense still tended to cluster when Poland scorers approach the goal without effectively marking their opponents.

It came only as a half-surprise then when, at the 60th minute mark, Jan Bednarek scored Poland’s first goal. The free kick of Kurzawa made its way in front of the goal and was skillfully kicked by unmarked Bednarek. What followed was a panic scramble by the Japanese team to equalize the score and subbing in attacker Inui.

This culminated when Kawashima, at the 81st minute, even had to save an own goal shot by Makino. Japan got another scare when Robert Lewandowski found his way in the scoring area—he slid but hit it too high.

However, the real turn of events came when Colombia helped Japan’s fate by scoring against Senegal. At the moment Colombia scored the goal, Japan understood that if Colombia maintained the advantage Samurai Blue would qualify in the group on the fair play rule.

Consequently, the last 10 minutes were spent with easy passes and the lowest risk of achieving other penalties. The game ended with Japanese fans waiting with bated breath the conclusion of the Senegal-Colombia game, and ended with a sigh of relief when it was finally announced that Japan made it through.

The other group H match played in Samara between Senegal and Colombia had implications on whether Japan would advance to the next round or not. Colombia booked their place in the Round of 16 with a hard-fought win over Senegal and claiming the top of the group standings. Likewise with Japan, Senegal was scoreless in the final match-up—groupwise they were identical on points, goal difference, and goals scored, but Samurai Blue advanced due to having fewer yellow cards accumulated in the first 3 matches than the Lions of Teranga.

The real star of the game was without a doubt the goalkeeper Kawashima. He notably pulled a stunning one-handed save at the 33rd minute against Grosicki’s kick, which was just about in, but he pushed it out of the goal just in time. Kawashima also saved another shot at goal on the 54th minute, when Zieliński managed to break through the Japanese defense. The keeper dives on it first, but he wasn’t so fortunate 6 minutes later, when the unmarked Jan Bednarek scored Poland’s first goal. Overall though, Kawashima’s performance was the highlight of the match and kept the Saitama Prefecture supporters cheering loudly throughout. He had made a couple of big mistakes in the past few games, but the 35-year-old had seemingly redeemed himself.

Preview of the Next Match

One thing is for sure, Japan needs to pick both its offense and defense strategies for the next match. Commentators were quick to point out that Japan got through on a technicality, and took a big gamble in the last minutes of the game. If Senegal had scored, Japan would have just spent 10 minutes passing the ball for nothing.

Yet it is also easy to criticize from the outside, and it is also necessary to remember the pressure these players bear. To end on a lighthearted note, therefore, we borrow the words of a Samurai Blue fan: “But how is it possible that, while they are not winning, they are all so good looking?”

Let us hope to see aggressive attacks and systematic defense as Samurai Blue takes on Belgium in the next game on July 2.