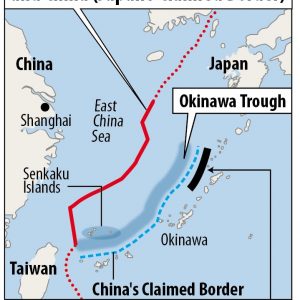 The Japan Coast Guard has been engaged in gathering topographic data on the sea floor in the vicinity of Okinawa Prefecture and the East China Sea. From the beginning of the 2018 financial year, the JCG has deployed two large-scale survey vessels fitted with highly accurate sounder equipment for use in shallow waters.

The purpose of the deployment is to collate topographic sea floor data as evidence of the geographical structures of the area. The data is expected to disprove China’s argument that there is a “prolongation of the continental shelf” in the East China Sea.

The JCG has also deployed unmanned survey vessels fitted with the same type of measuring instruments. International acceptance of China’s theory of continental shelf prolongation in the region could mean that Japan would lose its jurisdiction over sea floor resources. Therefore, the JCG is hurrying to collect and analyze precise data from the maritime region around the shallow Okinawa Trough.

The examination of sea floor data submitted by China to the International Committee has been halted by protests by Japan. However, according to Japanese government officials: “There is the fear that China will take further steps to seek the re-opening of the investigation. It is unknown what kind of action they will take.”

The Japan Coast Guard data is therefore a guarantee that Japan can respond rapidly to such unforeseen circumstances.

The new equipment being used aboard the Japan Coast Guard survey vessels Shoyo and Takuyo are specialized multi-beam sounders for measuring shallow topographical sea floor data up to depths of approximately 250 meters.

Until recently, the two vessels conducting the long-term offshore survey only had sounding equipment effective at depths of approximately 1,000 to 10,000 meters, and so had collected topographical sea floor data around the Okinawa Trough using equipment for deep-sea use.

However, the new equipment was acquired to collect even more precise, comprehensive data for the purpose of countering China’s argument.

Two more large-scale survey vessels are currently under construction and due to deploy in 2019 and 2020. Both are also scheduled to have the shallow-water sounding equipment installed.

In addition, the JCG has begun operation of a new type of unmanned survey vessel, the ASV—Automated Surface Vehicle—fitted with shallow-water sounder equipment. The ASV is carried by the Takuyo, and can operate autonomously for approximately one week, powered by a diesel engine. It is fitted with satellite tracking systems (including GPS) to efficiently survey a set area.

At 5.8 meters, it is smaller than previous unmanned survey vessels (which were approximately 11 meters) and can be fitted with a range of instruments for measuring sea temperature, sea currents, and salinity.

Under the banner of “Building a strong maritime nation,” China is proposing to extend its own continental shelf 150 nautical miles, or 278 kilometers, past the geographical Japan-China Median Line, all the way to the Okinawa Trough. Their objective is considered to be the expanded development of natural resources in the area.

At its deepest point, the Okinawa Trough is 2,300 meters. However, the surrounding areas abruptly become shallow, and the Japan Coast Guard will employ its shallow-water sounder equipment in the more than 200-meter-deep offshore maritime region between the Japan-China Median Line and the Okinawa Trough.