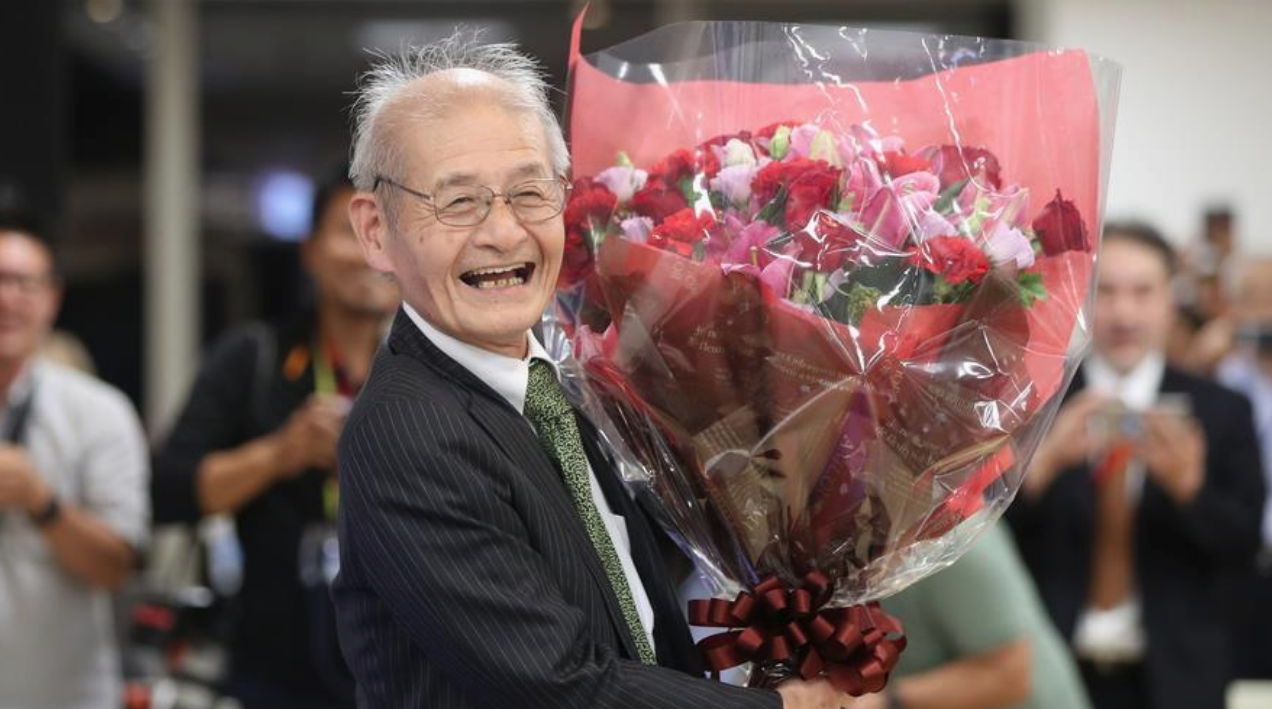 Japanese scientist Akira Yoshino was one of three 2019 Nobel Prize in Chemistry winners honored for their role in the development of lithium-ion batteries, announced the Royal Swedish Academy of Sciences on October 9. A prize of 9 million Swedish krona will be shared equally between the three scientists.

71-year-old Yoshino, if we include a later naturalized American citizen, is the 27th Japanese to win the Nobel Prize, and the 8th in Chemistry category.

The Royal Swedish Academy immediately commented that, “We have gained access to a technical revolution.”

The three scientists come from three regions of the world and were acknowledged for building progressively on the discoveries and advances achieved by the other.

In announcing the award, the Royal Academy noted the significance of their work, saying:

This lightweight, rechargeable and powerful battery is now used in everything from mobile phones to laptops and electric vehicles. It can also store significant amounts of energy from solar and wind power, making possible a fossil fuel-free society.

Lithium-ion batteries are used globally to power the portable electronics that we use to communicate, work, study, listen to music and search for knowledge. Lithium-ion batteries have also enabled the development of long-range electric cars and the storage of energy from renewable sources, such as solar and wind power.

According to the Academy, the foundation of the lithium-ion battery was laid during the oil crisis in the 1970s when British scientist Stanley Whittingham worked on developing methods that could lead to fossil fuel-free energy technologies. His work led to the creation of an innovative cathode in a lithium battery.

American John Goodenough took Wittingham’s work as a basis and sought to increase its potential, eventually demonstrating in 1980 that using the right materials, lithium ions could produce as many as four volts of electrical power.

This important breakthrough was further built upon by Japanese scientist Akira Yoshino, who created the first commercially viable lithium-ion battery in 1985. He substituted materials in the battery to make it lightweight and hardwearing, capable of being charged hundreds of times before its performance deteriorated.

The Swedish Academy described the energy producing process of lithium-ion batteries in which the lithium ions flow back and forth between the anode and cathode, rather than become part of a chemical reaction that break down the electrodes. The resulting energy produced lasts longer and is cleaner than preceding varieties

In announcing the Nobel award for these advances, the Royal Swedish Academy said that “Lithium-ion batteries have revolutionized our lives since they first entered the market in 1991.”

It then added that the three scientists  “laid the foundation of a wireless, fossil fuel-free society, and are of the greatest benefit to humankind.”

In the press conference after the announcement, Yoshino told the press about the moments preceding the breaking of the news:

“When I got the phone call, they started by saying ‘Congratulations’, so I thought to myself ‘this must be it’” he said jokingly, making the room full of journalists laugh warmly.

Yoshino, later in the evening in an exclusive interview with NHK, explained the significance of the lithium batteries as a choice for the Nobel Prize in the fight against the environmental problem:

“I think it is a way of saying that lithium batteries can be an aspect of the policy towards the environmental problem.”

This is a developing story. Watch these pages for updates in the coming days.

Meet the Laureates of the 2019 Nobel Prize in Chemistry :

John B. Goodenough was born 1922 in Jena, Germany.  He earned a Ph.D. 1952 from the University of Chicago, USA. He is now the Virginia H.  Cockrell Chair in Engineering at The University of Texas at Austin, USA.

Stanley Whittingham was born in 1941 in the UK. He received his Ph.D. in 1968 from Oxford University, UK. He is a Distinguished Professor at Binghamton University, State University of New York, USA.

Akira Yoshino was born 1948 in Suita, Japan.  He earned his Ph.D. in 2005 from Osaka University, Japan. He is an Honorary Fellow at Asahi Kasei Corporation, Tokyo, Japan and a professor at Meijo University, Nagoya, Japan.