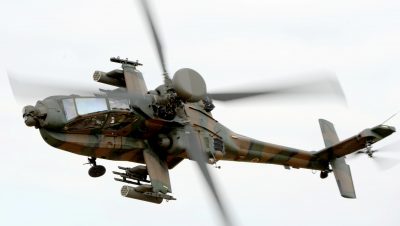 The induction of eight American-made Apache AH-64E attack helicopters by the Indian Air Force in September shows how things have changed for India in the field of defense procurement. In the last couple of years, India has bought an entire array of U.S.-made weaponry, including the likes of P-8s, C-130Js, C-17s, CH-47s, and M777 howitzers.

What is behind this increase in weapons sourced from the United States?

This spike in weapons systems procured from the U.S. mirrors the overall growth in the bilateral ties, which have made a dramatic turnaround in the period since the end of the Cold War. Until that time, the former Soviet Union was India’s biggest benefactor, something which changed completely after its dissolution.

Though India’s nuclear tests of 1998 cost the bilateral relationship a big setback, things rebounded after the visit of then-U.S. President Bill Clinton to India in 2000.

India is one of the world’s biggest arms importers. Going beyond its traditional reliance on Russia, New Delhi has been trying to increase the weapons sourced from other countries, like the U.S., France, and Israel.

This increase in U.S. weapons sales to India comes at a time when India and the U.S. are moving much closer to each other diplomatically. The U.S. has come to the aid of India on various issues, including of late the issue of terrorism emanating from Pakistan. In the aftermath of the February 2019 attack by Pakistan-based terror groups, which killed more than 40 Indian troopers in the border state of Jammu and Kashmir, the U.S. backed India’s actions, and the former National Security Adviser John Bolton went on to say that the U.S. “supported India’s right to self-defense against cross-border terrorism.”

New Delhi has signed agreements like the LEMOA (Logistics Exchange Memorandum of Agreement) and the COMCASA (Communications Compatibility and Security Agreement) with the United States — something which was unimaginable in an earlier era.

The LEMOA will allow U.S. and Indian troops to use designated military facilities for “refuelling and replenishment,” while the COMCASA is an Indian version of the Communication and Information on Security Memorandum of Agreement (CISMOA), one of the four key agreements that Washington signs with its allies and close defense partners.

New Delhi’s growing influence in Washington can also be seen in the fact that after initially offering to mediate between India and Pakistan on the issue of Kashmir, U.S. President Donald Trump backtracked from the same during his meeting with Indian Prime Minister on the sidelines of the G7 Summit in Biarritz, France, last August.

At the same time, the U.S. has realized the growing importance of India which can be seen in its renaming of its Pacific Command as the Indo-Pacific Command. With President Trump increasing the pressure on China on both the economic and military fronts, India will be a useful partner for the U.S. in the days to come.

The U.S. also wants to pull out of Afghanistan, and, although the present round of talks with the Taliban seem to have hit a dead end, the U.S. knows that India has been one of the biggest international donors in Afghanistan and has contributed in a big way to capacity-building efforts in that country.

How Does It Improve India’s Ties with Japan?

The U.S. is already conducting a host of military exercises with India, both bilaterally and in collaboration with countries like Japan. The most recent example can be seen in the Malabar naval exercises, the latest edition of which was held off the coast of Sasebo in Japan.

Besides, this is bringing countries like India, Japan, and the U.S. closer in the foreign policy arena as well. The three countries are holding trilateral meetings on the sidelines of important international gatherings like the G-20 Summit and the recent United Nations General Assembly in New York.

However, as the issue of India’s deal for the purchase of air defense system shows, New Delhi will continue to buy Russian-made weaponry, although defense imports from the U.S. (and other countries like France and Israel) will keep on increasing. In addition, though this time India has acceded to U.S. demands to cut imports of Iranian oil, such issues may be a dampener in the future.

Another issue will be the transfer of technology factor, as New Delhi has been insisting on the same in its defense deals. In addition, if the U.S. were to offer the same military platforms to Pakistan which it offers to India, New Delhi is likely to have issues with the same.

Notwithstanding all the hiccups, the U.S. is likely to become one of India’s key defense partners in the upcoming future. This represents a unique opportunity for U.S. allies like Japan to jump onto the bandwagon and work out their own defense deals with India.

Under the Abe government, Tokyo has tried to push for arms exports and India can be a key market for Japanese defense companies in the future.  Given the growing ties between Tokyo and New Delhi, this is an area with an immense potential that is waiting to be explored.

Dr. Borah is a senior research fellow with the Japan Forum for Strategic Studies in Tokyo. Before taking the position in Japan he was an assistant professor of International Relations in India and a visiting research fellow with the Japan Institute of International Affairs. The views expressed are personal. E-mail rupakj@gmail.com and Twitter @rupakj.