The Japanese are acutely aware of transient nature of all things. The degree to which they actively acknowledge impermanence has turned it into an aesthetic of its own that is also related to the Japanese appreciation of nature and the celebrations thereof.

In my first article in this series, I wrote about my impressions of Japanese culture and about the Japanese term mono no aware that also touches on the feelings brought on by the recognition of impermanence.

Japanese medieval literary sources illustrate the acknowledgement of impermanence. Written in 1212, the first line of Hojoki, by Kamo no Chomei (1155-1216), reads:

but the water eternally changes.

The sound of the bells of the Gion Shoja,

toll the impermance of all things.

Additionally, in the collection of poems by Matsuo Basho (1666-1694) are poems that invoke the visualization of weathered skeleton in a field. In Japanese this is referred to as nozarashi, and is a reflection of our mortality. The theme can also be used to illustrate the dangers of travel in the early Edo period (1600-1868), as well as the fate of many samurai warriors on the battlefield.

in windy fields of memory,

If we would value the cherry if it did not fall–

in all things it’s the beginnings and

ends that are the most moving?

The quick bloom and short life of the cherry blossom is also used as a synonym for the samurai whose life could end at any moment.

There are other annual occasions in Japan that carry the same sentiment, be it over a slightly longer amount of time, and that is the life of the semi, or cicada. To most westerners, the loud chirping of cicadas can be quite annoying, almost like the sound of shorting electricity cables. To the Japanese, the sound is a reminder and another symbol of the ephemeral. A sound that is to be embraced for the short while it lasts.

It can be said that, while cherry blossoms (spring) and cicada (summer) are both seasonal markers, cherry blossoms are the visual manifestation of impermanence, while the cicada are the audible. The gradual decrease in the cicada’s song marks the coming of the end of summer.

The appreciation of impermanence also resides in much subtler places—for example, in slowly aging and maturing patinas, whether it be the inside of the lid of an antique tea caddy, the slowly oxidizing tang of a sword, or the deepening patina of the soft metal sword fittings.

It is also very common in Japan to hear the term natsukashii, loosely translated as nostalgic. The word “nostalgic” is seldom used in everyday western life, and when it is, it tends to be related to the rather kitsch, and even have rather negative connotations. Whereas, in Japan, natsukashii is used in a kind of joyful appreciation.

Themes of impermanence can often be seen in sword fittings. Just like Basho’s description of the weathered bones in a field, the nozarashi motif is commonly seen on tsuba (sword guards). This tsuba pictured below is by the Momoyama period (1573-1615) tsuba maker Nobuie. It is a plain iron tsuba with carved-out skulls. It is said that this kind of tsuba appealed to samurai warriors as it illustrates their resolute acceptance of death. Tsuba of this design are generally practical and rather austere, strongly forged in thick iron.

Another theme that illustrates the feeling of impermanence are designs featuring torn fans. This tsuba was made around the early 17th century and is attributed to the Shoami school. It has an iron ground with pierced (sukashi) torn folding fans. 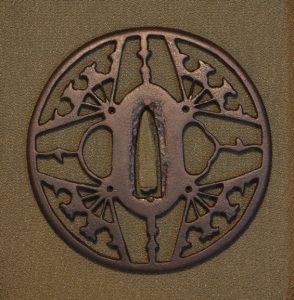 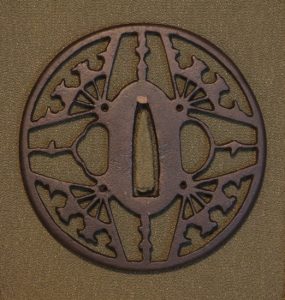 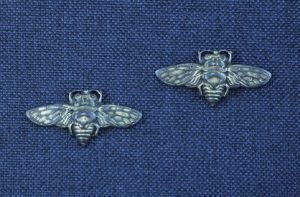 This decorative carving of cherry blossoms on a modern katana, by Master swordsmith Miyairi Kozaemon Yukihira, invokes the feeling of the samurai spirit that is frequently embraced as the spirit of the Japanese people today. A symbol as well of the arrival of spring after the cold winter, the sublime beauty of the blossom is regarded with a hint of sadness at its short, but brilliant life. Many people across Japan celebrate and admire the blooming of cherry blossoms with parties beneath the trees during the flower viewing season known as hanami.

Living in Japan, one doesn’t have to be a samurai to be aware of the fleeting essence of life. With fairly frequent natural disasters, Japan is no stranger to calamity. It is a great reminder that nothing lasts forever, and that life goes with or without you. However, the ephemeral is to be savored and appreciated, and the Japanese are the masters of recognizing and celebrating our impermanence.

Paul Martin is a former British Museum curator, and a secretary of the Nihonto Bunka Shinko Kyokai (NBSK). He is also an appointed Bunka Meister (Master of Culture: Japanese Swords) by the Japonisme Shinko Kai (Honganji).