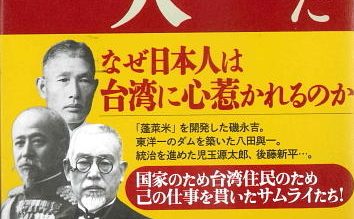 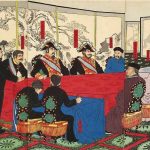 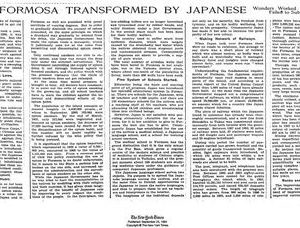 April 17 marked the 125th year since the Shimonoseki Treaty was signed with the Qing dynasty (present-day China) at a posh Japanese restaurant in Shimonoseki, Yamaguchi Prefecture, in 1895. It followed Japan’s victory in the Sino-Japanese War that broke out the previous year.

Under the treaty, Taiwan was ceded to Japan. Japan governed Taiwan as its territory for 50 years, from 1895 until the end of World War II, in 1945. It was the first overseas territory acquired by Japan, centuries behind the territorial acquisitions of the great powers of Europe and the United States.

How was the Japanese rule of Taiwan seen by Europe and the United States?

Toshio Watanabe, former president and now academic adviser for Takushoku University, introduced a portion of the contemporary Western views in his recent book, Taiwan wo Kizuita Meiji no Nihonjin (台湾を築いた明治の日本人, or Meiji-era Japanese Who Built the Foundation of Taiwan, in Japanese, by Sankei Shimbun Publishing, March 2020).

One view was found in an article dispatched from London and published by The Times of Britain and The New York Times in September 1904. The article was headlined, “” There was no byline, but Watanabe presumed, “Given the outstanding writing style and fruitful contents, the story was written by an able correspondent.”

The article was published less than 10 years after Japan’s colonization of Formosa (the old name of Taiwan) had begun.

The headline continued: “Wonders Worked in a Few Years with a People That Others Had Failed to Subdue ― A Lesson for Other Colonizing Nations.” According to Watanabe, “Japan was still a third-rate country in the world at the time, but first-rate newspapers of Europe and the United States were most likely astounded at [the changes it worked in Taiwan].”

The article focused on Japan’s modernization policies, such as its “generous rule of law that attached importance to the people of Taiwan.” It noted “introduction of a public education system,” as well as railway networks, banks, and currency.” As a result, Taiwan “achieved stunning economic growth and the people enjoyed the resultant prosperity, leading to a sharp rise in population,” Watanabe quoted the article as saying.

The article pointed out that “Spain and the Netherlands had tried in vain to colonize” Taiwan before the advent of Japan’s colonial rule. It added, “Britain and France (with sufficient military and other powers to make Taiwan their territory) would not tread into the island [of Formosa].”

The author of the article went so far as to write that Li Hung Chang, who represented the Qing dynasty at the Shimonoseki Treaty signing, “complacently commented Japan would soon recognize Taiwan is a prohibitively poor island.”

Western powers could not handle the strong resistance of Taiwan residents, while the Chinese of the Qing dynasty looked down upon Taiwan as “a remote provincial island,” leaving it to take its own course.

Then why were Japan’s achievements in Taiwan so stunning? The article attributed Japan’s success to “a drop in the number of opium smokers.”

Britain had exported opium to the Qing dynasty, flooding the country with the drug and earning huge profits. Britain had waged war with Qing from 1840-1842 over the opium trade, which the Chinese dynasty strongly resisted.

Japan, however, considered that opium would hamper the development of Taiwan, according to the article. It observed that Japan respected the customs of Taiwanese residents as much as possible, and guided them in the direction of civilization in a generous manner. Japan adopted a monopoly system, under which opium was sold only to certified drug smokers. All of the proceeds, according to the article, were used to carry out the government’s opium eradication policies. Thus, Japan did not need to resort to a forcible containment policy.

The article evaluated without bias that Japan’s generous response to the Taiwan issue, which had been unimaginable to the people of Europe and the United States, was “one lesson to learn.”

In this way, Taiwan’s colonization experience prompted Western powers to reflect on their own colonization policies. Although the article’s analysis may not represent all of the views of Western powers, it should be remembered as an important cross section of history in the process of Japan’s modernization.

Watanabe has no intention whatsoever of glorifying Japan’s colonial rule of Taiwan. But, as he sees it: “Compared with former colonies under the rule of Western powers, Taiwan provides a prominent example of overwhelming success. Japan’s colonization of Taiwan marked the first case in history in which the fiscal balance of a colony had been turned into the black in 10 years.”