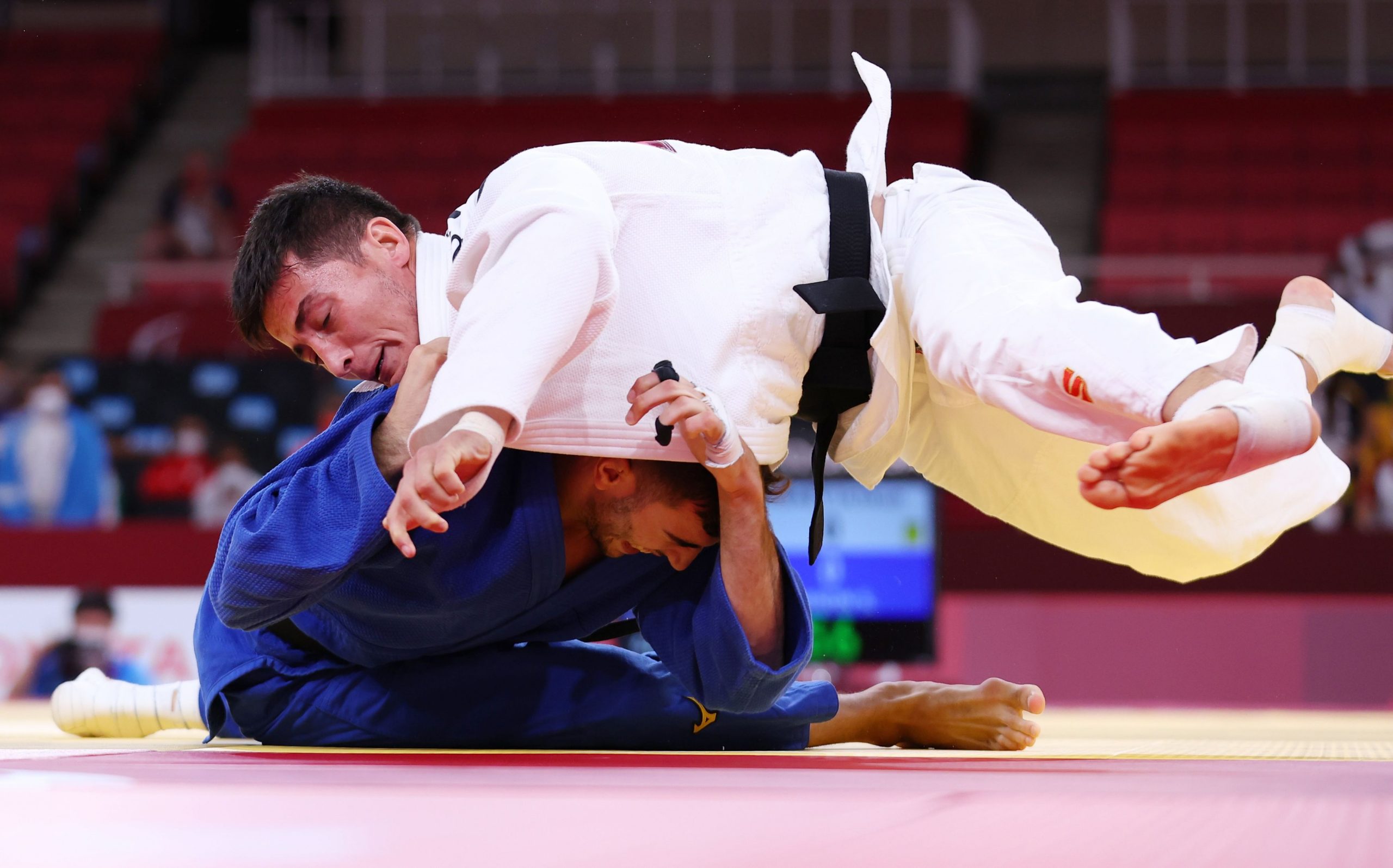 Coaches’ words and athletes’ movements on the tatami provided the soundtrack for every match during a busy opening day of judo competition at the Tokyo Paralympics.

From start to finish throughout the bevy of activity during the day’s 57 matches, the sounds from the sideline were instructional, aspirational, and to the point on Friday, August 27 at Nippon Budokan. Rapid-fire pronouncements in a variety of languages offered clues about the tactics and second-by-second evaluations from coaches, too.

Unlike its Olympic counterpart, Paralympic judo permits coaches to talk during matches, dispensing advice, which they do frequently or constantly. This gives the judoka a sense of direction, constant reminders about strategy and/or key phrases that drive home a motivational tactic honed through months or years of practice in the gym.

In para judo, all judoka are visually impaired. There are three classifications to measure this from B1 (total blindness) to B3 (low vision).

At the Tokyo Paralympics, there are 129 participants from 36 nations competing in 13 weight categories (seven for men, six for six women).

Two to three B1 judoka are included in each weight class, along with athletes with high world rankings, one spot reserved for a Japanese judoka, and some wild cards.

Four-minute matches begin with the sense of touch giving the judoka a proper perception of location. Each judoka is required to grip their foe’s sleeve and lapel and hold still before a match gets underway.

Furthermore, the referee gives the participants words of instruction that would be carried out, partly or mostly, by hand gestures in other sports.

“When competitors approach the edge, the referee calls from the middle of the mat to let them hear where they should be,” Olympics.com explained.

Another requirement designed to help the judoka maintain their sense of location is included on the uniforms: red circles, which are 7 cm in diameter, on the outside of the sleeves.

The aforementioned soundtrack through Day 1 of the judo tournament was particularly animated during the final bout of the evening, when Spain’s Sergio Ibanez Banon met Uzbekistan’s Uchkun Kuranbaev in the men’s under-66 title match.

Kuranbaev secured the gold medal in the golden score period, winning 1-0 by soto-makikomi (outer wraparound throw), but not before the words of the Spaniard’s male coach and the Uzbek’s female coach collided again and again in the sparsely populated arena. (Viewers watching live could also hear every word in full stereo.)

On several occasions, you heard “perfecto, perfecto (perfect, perfect),” as the silver medalist’s coach shouted from the sideline. He also uttered “esta bien” (that’s good) again and again after other sequences.

You also heard “tranquilo, tranquilo,” as the mentor told him to stay calm.

Both Ibanez and Kuranbaev are classified as B3.

Earlier in the evening, Japan secured its first judo medal of the Tokyo Games in the men’s under-66 kg weight class, with Yujiro Seto collecting a bronze. The 21-year-old Itoshima, Fukuoka Prefecture native defeated Georgia’s Giorgi Gamjashvili, a bronze medalist at the 2018 International Blind Sports Federation’s World Judo Championship, 11-1 by ippon via an uchi-mata-sukashi (hand-throwing technique).

Seto was born with limited vision and color blindness. He’s participated in the sport since age 4, and is attending the University of Teacher Education Fukuoka as a fourth-year student, with an intended goal of one day teaching at a special needs school.

The future teacher was pleased to earn a medal, but has higher ambitions for the future.

“The next [target] is the gold medal in Paris,” Seto told NHK.

Looking back on his performance, he said: “I’m very happy. It was the last match, so I was conscious of going forward and fighting. … Over the past year, I have been able to reconfirm that I have been able to do judo with the support of many people, so I would like to thank the people who supported me.”

Hangai, who was seventh in her Paralympic debut in London in 2012, placed fifth at the 2016 Rio Games, and again moved closer to her elusive first Paralympic medal.

Japan’s other medal contender on the day was Yui Fujiwara, who lost 10-0 by ippon to Russian Alesia Stepaniuk in a women’s under-52 kg bronze-medal clash.

Shirinli captured the gold by prevailing in his duel with Kazakhstan’s Anuar Sariyev. The result: 10-1 by ippon.

Hajiyeva triumphed 10-1 in the golden period over France’s Sandrine Martinet, a-five-time Paralympian and gold medalist at under-52 kg at the 2016 Rio de Janeiro Paralympics.

It was a thrill for Hajiyeva, 21, to conquer the field in her Paralympic debut.

“I’m very happy to be a Paralympic champion at this young age,” Hajiyeva told reporters. “I always had hopes for that, and I knew that if I put everything into coming here, I will put my everything to go to the top after this.”

She added: “This will always be a motivation for me, and I believe that I will be able to repeat it in the Paris 2024 Paralympics.”

A Legend Pursues Another Medal

In doing so, he became the first para judoka to win four straight gold medals.

And he’s kept his medal streak alive ever since.

In 2012, the legend claimed the bronze in the under-100 kg weight class at the London Games, and four years later he finished runner-up in the same weight class at the Rio de Janeiro Games at age 45 years, 322 days, which made him the oldest Paralympic judoka medalist.

“If you are able to represent your country in Tokyo, then why not?” da Silva remarked in October 2020, according to Olympics.com. “At 50 years old, I am already in the first part of the Paralympic cycle for 2024. If nothing happens to me, I will stay in the sport.”

Follow da Silva’s quest to take home a medal from Tokyo on Sunday, August 29, the final day of Paralympic judo competition. It starts in the quarterfinals.