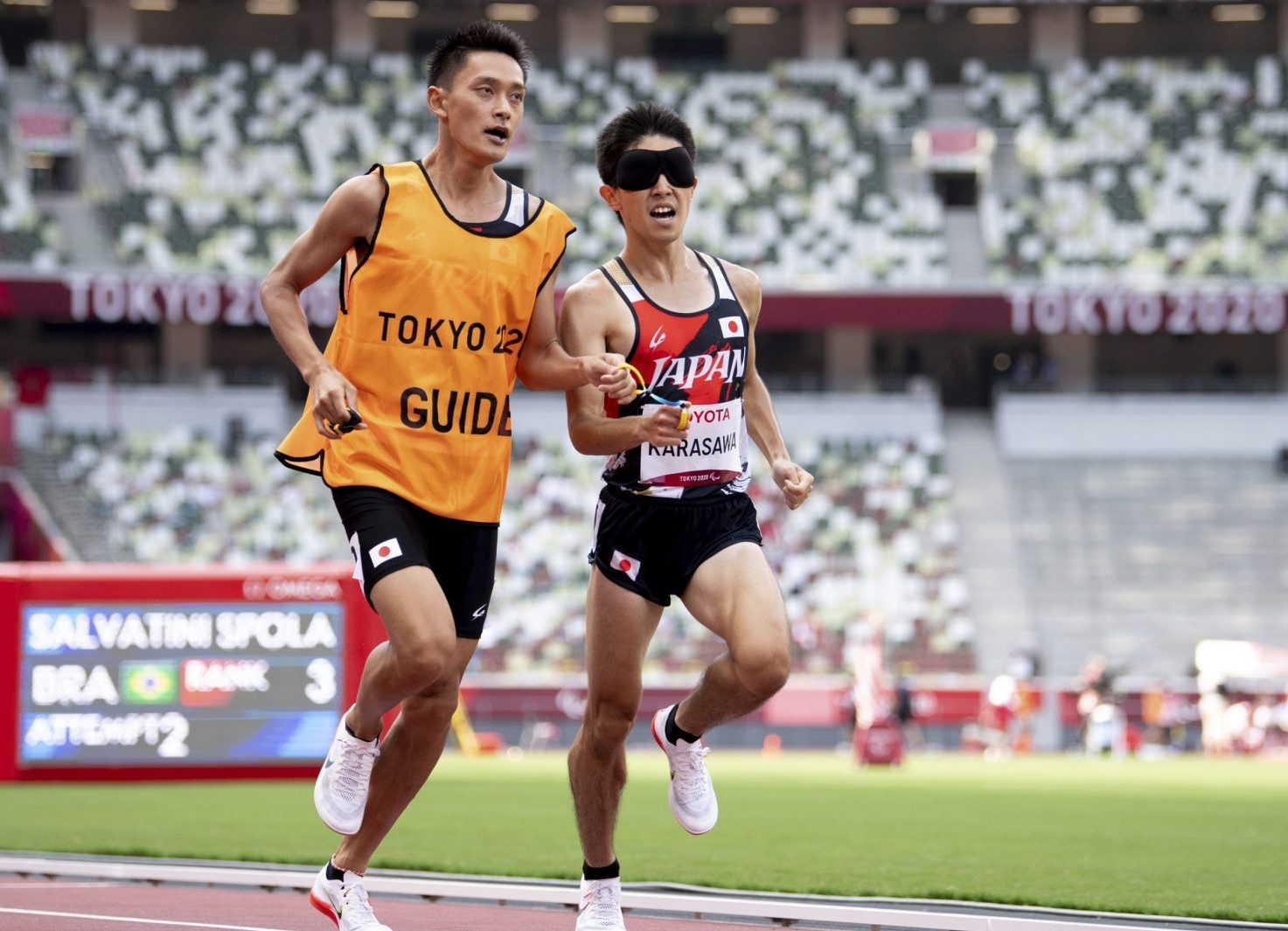 Japan's Kenya Karasawa competes in the men's 5,000 meters T11 final during the Tokyo Paralympics on August 27 at the New National Stadium. (Joel Marklund for OIS/via AP)

Track and field events kicked off at the New National Stadium on Friday, August 27, and with it some of the best athletic feats on display.

In the first athletics event on the calendar, Japan’s Kenya Karasawa and Shinya Wada stole silver and bronze medals, respectively, in the T11 5,000-meter race event for visually impaired athletes. The Paralympic champion was Brazil’s Yeltsin Jacques, who sprinted past Karasawa in the final stretch and finished in 15 minutes and 13.62 seconds.

Karasawa is a 27-year-old from Gunma Prefecture who began training in the sport in 2016 when he was in middle school. He completely lost his sight at the age of 10, after suffering a retinal detachment at birth. Karasawa finished the race at the Paralympics in 15:18.12.

The silver medalist is also a rising star in the sport. In 2019 he won the bronze medal at the world championship, and he set the world record in May 2021.

Bronze medalist Wada, a 44-year-old Osaka resident, first took up the sport in 2006. This is his third Paralympic appearance. He previously won the bronze medal in the same category at the 2012 Paralympic Games in London. He finished his race on Friday clocking 15:21.03.

Blind runners have guides who are connected to the para athletes through a tether around the wrist and held in the hand to direct them around the course. In courses longer than 5,000 meters, runners can have two guides who can swap places throughout the race.

Karasawa showed particular appreciation for his guide, commenting after the race to NHK: “My runner guide told me ‘you can do this!’, thanks to his encouragement I tried the best I could.

“I am really happy that I managed to get a medal, together with my colleagues and friends.”

Wada also showed satisfaction in his result. “In the heat and the hard conditions, I am really happy I managed to get a medal, something I hadn’t managed in Rio in 2016.”

For his part, one of Karasawa’s guides, Koji Kobayashi spoke to NHK about the importance of the runner guides for the athletes: “The fellow runner is the eyes of the athlete and the strategic brain, making his role an important one for how to bring out the ability of the athlete.”

Paralympic wheelchair tennis matches on outdoor courts were delayed on August 27 due to high heat in Tokyo. After a spell of rainy weather, the last days of August have come close to a maximum of 36 degrees Celsius in some areas.

The matches scheduled on all nine outdoor courts at Ariake Tennis Park were all suspended with temperatures over 33 degrees Celsius at 11 a.m.

As para athletes have sometimes more difficulty than able-bodied athletes in regulating their body temperature, precautions to avoid heat stroke are strict.

Even during the Olympic Games, tennis matches were moved from the morning to the afternoon to beat the heat, and several athletes had voiced difficulties in playing in high heat and humidity conditions.

One match, between Japan’s Takashi Sanada and the Netherlands’ Carlos Anker, went ahead at the Centre Court with a closed roof and air conditioning.

Despite the initial “surprise” of playing under new conditions, as the Japanese told Kyodo News, Sanada went on to prevail in his match against Anker 6-1, 6-1.

August 27 also marked the start of the sitting volleyball matches.

Japan came up against Italy in the women’s pool A. Italy prevailed with a strong 3-0 score, with Italian Francesca Bosio in particular single-handedly achieving 15 points.

The same result was reflected in the men’s pool A, where the Russian Paralympic Committee (RPC) team breezed past Japan, also with a 3-0 score. The RPC grabbed the first set in just 15 minutes with a 25-6 score. Denis Shestakov was the high scorer in the game, with a stunning 13 points.

Sitting volleyball takes place on a slightly smaller court compared to the standing version, with a net approximately one meter high. As the name suggests, players must have their pelvis fixed to the floor at all times.

The sport was first introduced at the Paralympics in 1980.

Not one, not two, but nine records were broken at Yumenoshima Park in Tokyo’s Koto Ward on the first day of para archery competition.

China set five of the records, including Chunyan Wu who recorded a Paralympic-record score of 642 points in the women’s individual recurve opening ranking round, setting the tone early in the day.

Compatriot Zihao He, who is classified as W2 (impairment in the legs), hit his target with stellar accuracy en route to a record-shattering 705 points in the men’s individual compound open ranking round, which consisted of 72 arrows. The compound reference indicates a compound bow.

“It’s my first time at the Paralympics. I was extremely nervous,” the 27-year-old Beijing resident was quoted as saying on the World Archery website. “I’m still trying to adjust to the situation. I was focusing on shooting and, honestly, I’m still in that mindset.

Asked about setting a Paralympic record, he responded by saying, “Wow! I’m glad. I’m really happy. My mother actually shot a world record so I feel like I’m, to some extent, tied with her.”

Another Chinese, Minyi Chen, amassed a record 640 points in the W1 women’s individual ranking round.