[Bookmark] Scam is in the Heart of China’s Economic Miracle 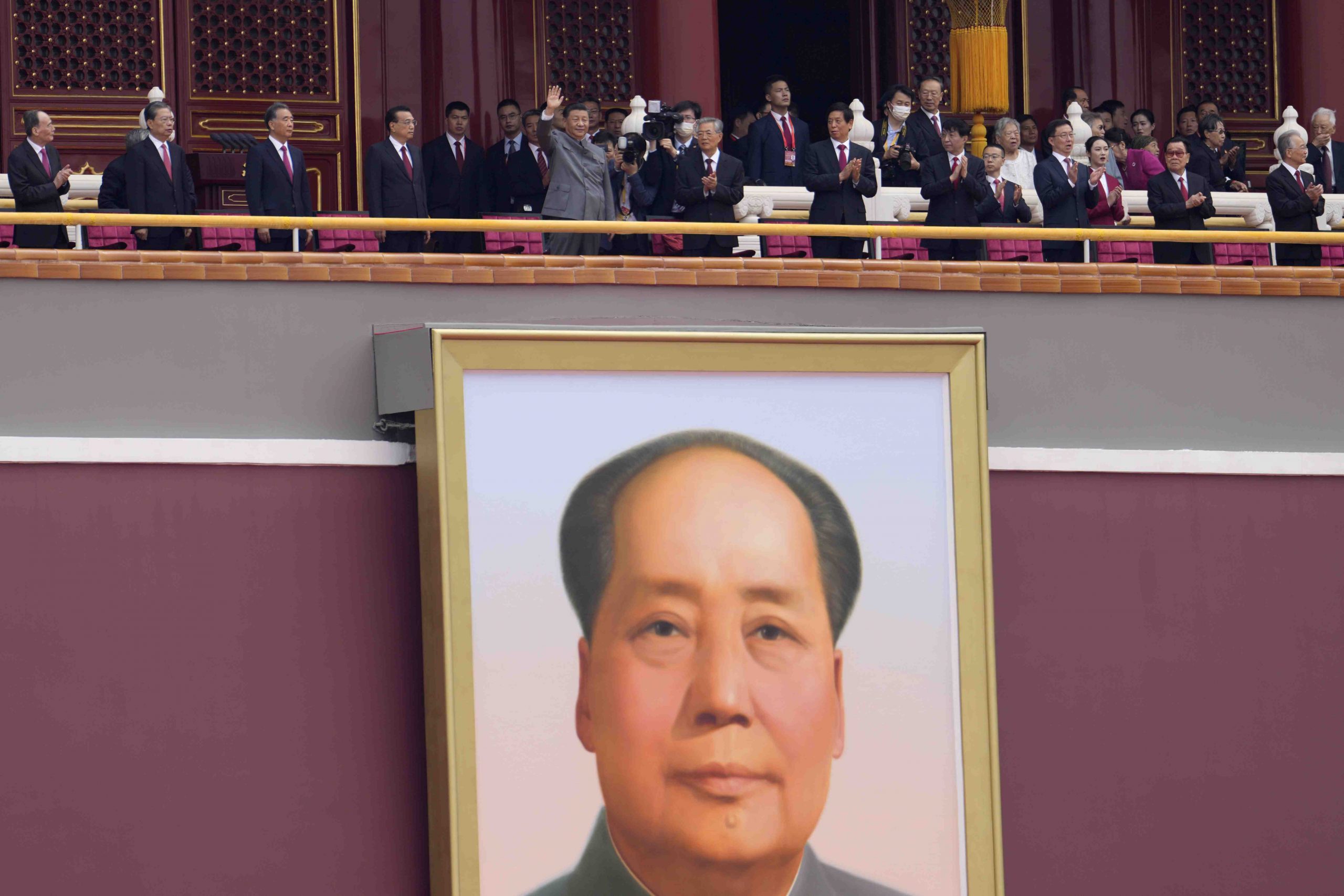 Chinese President Xi Jinping, center, waves above a large portrait of the late leader Mao Zedong during a ceremony to mark the 100th anniversary of the founding of the ruling Chinese Communist Party at Tiananmen Gate in Beijing Thursday, July 1, 2021. (AP Photo/Ng Han Guan)

Bookmark is a JAPAN Forward feature that gives you long reads for the weekend. Each edition introduces one overarching thought that branches off to a wide variety of themes. Our hope is for readers to find new depths and perspectives to explore and enjoy in this essay.

On July 1, I watched the news reports showing Chairman Xi Jinping standing in the exact location as Chairman Mao Zedong had in 1949 when he declared the formation of the People’s Republic of China. Xi followed the visual marker by giving a one-hour glorification of the 100 years of existence of the Chinese Communist Party.

In the image the CCP has so carefully crafted for itself, the Party never makes mistakes and always gets the credit for everything “good” that happens. So it came as no surprise that Chairman Xi did not thank the four people without whose actions the CCP’s China might not have made it into the 21st century.

United States President Richard Nixon and Secretary of State Henry Kissinger opened the door to the world for China in 1972. And then, in 1979, U.S. President Jimmy Carter normalized relations and, along with it, gifted the communist country the “most favored nation” trading status. Finally, Bill Clinton inexplicably arranged China’s access to the World Trade Organization (2001).

People either do not know or do not recognize how the entire trajectory of the CCP’s history would have been vastly different but for those four decisions.


Gifts from the West Built China

A few personal experiences will lend support to that statement.

My first engagement with China was in the first years after Mao had died in 1976. As a young lawyer in Tokyo, I was among those who drafted the first commercial technology transfer agreements from Japan to China in 1977. They were the foundation for China’s motorbike industry. Until those agreements, it was bicycling everywhere.

However, the best illustration of where China stood four decades ago, a few years after Nixon’s gift, was the work we did in 1979 on the first commercial bank loans from Japan to China since WWII. One of the top Japanese commercial banks lent $400 million USD — a very sizable amount in those days — to a China state-owned enterprise (SOE) mining company, backed up by a full guarantee from the People’s Bank of China.


Opening the Door to the Golden U.S. Market

Fast forward 10 years to the 1980s. As a young executive responsible for developing and executing plans to enter into Asia-Pacific markets, I started traveling monthly to China with my colleagues on a mission to try and piece together a series of deals at a time when China was desperate for foreign investment and technology. The U.S. multinational involved had no investments in China, but the CCP was anxious to persuade it to introduce its world-class engineering plastics technology. However, the trade rules applicable to China made it almost impossible to succeed.

In those days, in order to gain the multiple local and national approvals required for any significant China investment, the saying was that “everything is forbidden, but everything is possible by exception.” China had national plans to produce cars, consumer white goods, and personal computers, but could not do it without engineering plastics.

We needed a series of exceptional approvals that would allow us to export to our new Chinese subsidiaries and joint ventures (JVs) the key components needed in manufacturing the final products, and then for the Chinese side to pay for the imported components in U.S. dollars. Our subsidiaries and JVs would have to sell the manufactured products in Chinese yuan because their customers had no access to the U.S. dollars. Without exception, none of them could otherwise pay for the imports as the Chinese currency was not yet convertible.

We required a never-before-issued approval from Beijing’s Ministry of Foreign Economic Relations and Trade (MOFERT) for our China subsidiary to buy a handful of raw materials that were in abundance, that we would use in our plants. Those were to be purchased in Chinese yuan and then exported in U.S. dollars.

To gain those approvals, we needed political support. We found it in Wang Daohan, a former mayor of Shanghai and Party leader for the Shanghai greater region, where we planned our proposed investments. Wang was also a member of the CCP central committee.

We met Minister Wang more than a dozen times from 1987 to 1989, mostly one-on-one in the enormous VIP meeting room of the Shanghai municipal offices, which was in the former Hong Kong Shanghai Bank building on the Bund. He always wore a black or dark grey “Mao suit,” was generous with his time, and his advice on approaching Beijing was excellent.

He also made sure a Shanghai MOFERT official was assigned to watch over the project from the Shanghai side. This official was exceptionally competent and appeared to be sincerely dedicated to seeing his country develop. He never once had his hand out. He represented the best of what the Party could produce in those days.

Sometime in early 1989, Minister Wang took me to the roof of the building and pointed across the Huangpu River to the Pudong area, but the only thing visible was swampy land with a few of the typical one-story peasant huts. “In 10 years, you will be able to see that area from the moon,” he exclaimed. I was polite but dubious. There was not a single bridge in sight, and the only access was a terrifying, one-lane, leaking tunnel under the river with just a string of lightbulbs for lighting.

Once Nixon and Kissinger opened the door to foreign investments, and Carter and Clinton opened access to WTO and MFN to the golden U.S. market, he was right. The bridges and international airport were built, and the first of today’s incredible Pudong skyline started to appear. And, yes, one could see the lights of Pudong from space.


Built on the Backs of the Peasants

Again, fast forward a decade, and we are back in China to lead a U.S. company’s efforts to penetrate the China market. Moreover, we are back to Suzhou outside of Shanghai to find a location. In the past decade, Suzhou has changed beyond imagination.

In 1988, there was not yet one factory built, but Suzhou was attractive as it was a Singapore government-China government JV and had a dedicated power plant. There was great jubilation when a new four-lane highway was opened that cut travel time from Shanghai to Suzhou, but two weeks later it was shut down for repairs.

The companies that built the road and constructed the 250-odd overpasses and bridges were on different pages. The overpasses were all considerably higher than the roadbed, which led to speeding trucks and vehicles going airborne. The overpass company had less political clout as they were required to rip out all of the overpasses and rebuild them, taking six months. Yes, even in 1989, China could not build a simple highway.

By 1999, a new eight-lane highway was perfectly built. The Suzhou Development Zone had hundreds of factories constructed with foreign investment and were pumping out products, many exported, adding to China’s rapidly growing export FX (foreign exchange) account.


Lust for Part of the Riches

Other things had changed as well. By the end of the 20th century, not only Shanghai, but almost all major cities, had built huge, shiny new extravagant municipal offices, as the money from the massive developments continued flowing into their coffers.

The flood of wealth was not just from foreign investment, although that was still growing exponentially, but also from the forced transfer and massive conversion of agricultural land. Peasant families who had been farming for generations were forced off their land in return for a bit of cash and an apartment with indoor plumbing and electric lights. Mainly of shoddy construction, most did not last a decade.

However, the real scam was the cities would buy the land from the peasants for, let’s say, 10, sell it for 500 to local developers, who kicked back some to the officials. The developers converted the land into industrial parks or residential housing and then sold them for 5,000, again kicking back to the officials. The cities used the profits to fund other local developments.

As millions of hectares of land were taken and developed, it created an enormous transfer of wealth from the peasants to the Party and their allies.

The mood was shifting among Party government officials. The pervasive corruption could no longer be hidden as senior Party officials throughout the coastal provinces were getting very wealthy. You could see it in the cars they now drove, the watches they wore, and the discussions about their children studying abroad.

This massive displacement of peasants and concurrent shift of migratory workers from the hinterlands to the coastal provinces showed up in drug addicts, beggars, and prostitutes reappearing in plain view. They had not been extinct, but had been hidden for the preceding 20 years. Now the problems were too pervasive to hide.

Fast forward another 10 years. The peasant land scam to Party coffers had, by then, expanded throughout the country to the far western provinces. And, I am back. This time in Hubei province and Wuhan, sorting through a U.S. company’s old JVs and looking to reorganize them and consolidate them into new greenfield operations.

By now, the CCP is heavily involved in most foreign JV companies, demanding that the company Party representative sits in business and board meetings. Any changes to corporate structure now require the Party leader to sign off in advance, whereas 30 years earlier it had been the local MOFERT.

Corruption is now so pervasive across the entire country from top to bottom, and at every level of the Party, that “red envelopes” must be handed out to get a city department to paint parking lines on the street in front of your factory. Local and regional government officials looked at the Party leaders and saw the obscene levels of wealth and asked, why not me?

As the 100-year celebrations of the CCP continued, I considered how the history I witnessed matched up with Chairman Xi’s version of CCP history. I also thought of the four U.S. leaders whom Chairman Xi did not thank, despite the enormous role each played in the “economic miracle” that Xi was trumpeting.

The “miracle” was made possible by the massive investments and technology transfers from western companies. But the “miracle” was expanded and extended as well through one of the most massive thefts and displacements of impoverished rural families the world had seen in centuries.

Like the well-documented but historically expunged horrors the CCP inflicted on its people, it will never recognize that “scam” is the heart of the “economic miracle.” The Party never makes mistakes. And certainly never its sitting Chairman.

All was grand and glorious in the People’s Republic and the CCP world as Chairman Xi looked out from his perch above Mao’s giant photo on the Tiananmen Gate, the entrance to the Forbidden Palace, and pounded his chest and trash-talked the rest of the world.