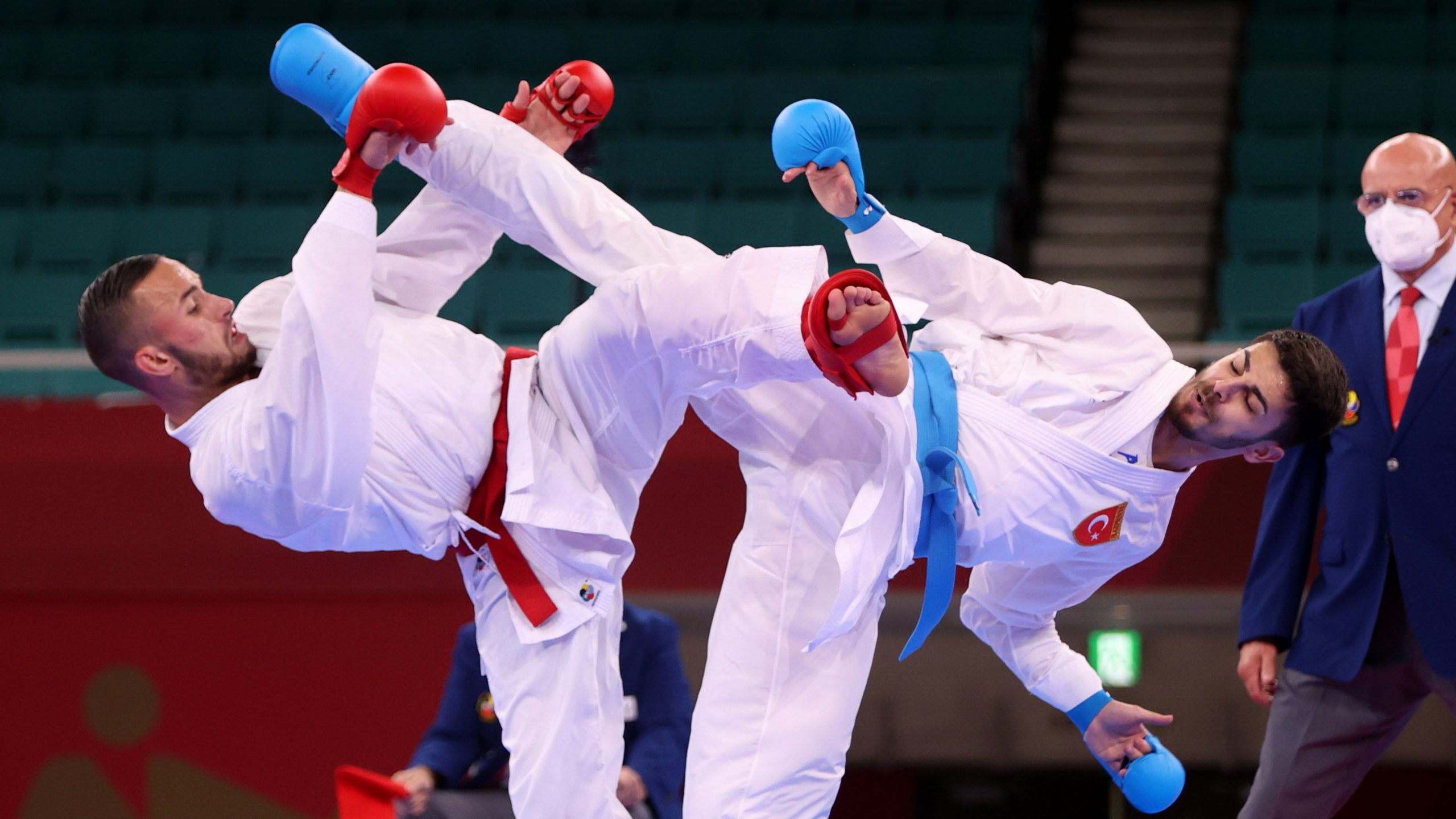 Karate athletes have long eyed the prospects of competing at the Olympics. This week in Japan, that dream came true for many.

In the women’s kata, the firm favorite was Japan’s two-time world champion Kiyou Shimizu. The 27-year-old Osaka native has won the gold medal at many international championships, only placing second once at the 2018 World Karate Championships in Madrid.

Shimizu won her pool by a fair margin, performing the kata (forms) oyadomari no passai and chatanyara kushanku in the elimination rounds, racking up a score average of 27.70 points, which was more than 2.13 points over her closest rival in the pool. She then performed chibana no kushanku, scoring 27.86 in the qualifying round to secure her place in the final against Spain’s Sandra Sanchez, who she lost to in the Madrid final.

By all indications, it was going to be a close final to decide which one of these athletes was going to secure the gold-medal position.

The first battle for a bronze medal took place between Dilara Bozan of Turkey and Grace Lau of Hong Kong. Both Bozan and Lau opted to perform chatanyara kushanku. Bozan was awarded a respectable score of 26.52, but Lau edged her out of the competition to take the bronze medal with 26.94 points, a mere 0.42 difference in points.

Sakura Kokumai of the United States and Italy’s Viviana Bottaro met in the second bronze-medal matchy. Both competitors chose suparinpei for their final kata of the competition. Kokumai’s performance was outshone by Bottaro’s and was reflected in the scoring: Bottaro 26.48, Kokumai 25.40. As a result, Bottaro claimed the second bronze.

In the women’s kata final, which was held after the third-place matches, it was a battle of the giants. Both competitors chose the difficult kata of chatanyara kushanku.

First up was the 39-year-old Sanchez, who performed with every fiber of her being. The difference in the level of skill between the finalists and the athletes competing for bronze was clear.

Next up was Shimizu, competing in her home country for an Olympic gold medal. The atmosphere was electric. The silence of the Budokan while she performed her kata was deafening. Her stances were precision perfect, her spirit exuded around the stadium. Both finalists had given their all.

The two competitors stood at the edge of the mat while the judges made their decision. The tension was palpable, it was difficult to know who was going to emerge victorious, but then the judge appeared and raised his hand to indicate that Sanchez had just become the first-ever women’s Olympic kata champion. Her score of 28.06 pushed Shimizu (27.88) into the silver-medal position by a difference of only 0.18 points.

Normally a contestant in the U-60 category, Assadilov is fighting in a weight class way above his usual one. He is ranked No. 1 in the Karate1 Premier League, and was a bronze medalist at the world championships in 2018.

However, the top two contestants from each pool go through to the semifinal with two runners-up both receiving a bronze medal, while the two winners fight it out for gold and silver.

The semifinals were fought out with one contest between Assadilov and reigning world champion Steven da Costa of France. The other semifinal was between Abdel Rahman Almasatfa of Jordan and Eray Samdan of Turkey.

Almasatfa’s track record is not as strong as the other semifinalists, but his skills were shining in the preliminary rounds. He placed fifth at worlds in Madrid in 2018, and won the Asian Karate Championships the same year in the U-67 category in his home country, but hasn’t been able to secure a win since then.

Samdan from Turkey is another contestant fighting above his usual weight. The 2021 U-60 European champion is looking to secure a gold medal for his country.

Da Costa disposed of Assadilov with a 5-2 win in the semifinal to put himself within reach of the gold medal. Samdan edged out Almasatfa with a two-point win, giving the fighter from Jordan his first loss of the day. Bronze medals went to Assadilov and Almasatfa.

Next, the final between Da Costa and Samdan.

The final started explosively with Da Costa scoring two points for a kick 46 seconds into the bout. The reigning world champion continued to dominate his opponent and take another further three points in the closing seconds and win the match 5-0.

The women’s lightweight kumite under-55 kg division was fiercely fought out between the two pools. The emerging victors of Pool A, Ivet Goranova of Bulgaria and Tzuyun Wen of Taiwan, who took the bronze medal at the 2018 World Championships in this division, and from Pool B, and southpaw fighter Anzhelika Terliuga of Ukraine, the 2018 European champion. Terluiga defeated Miho Miyahara, the reigning world lightweight U-50 champion, in their final fight of their pool. Miyahara appeared to struggle fighting above her usual weight category.

The semifinal matchups were Goranova vs. Austria’s Bettina Plank and Terliuga vs. Wen.

In the first semifinal, Goranova beat Plank 4-3 to reach the final.

In the second semifinal, it was a nail-biting finish with Wen scoring an ippon in the closing seconds to pull the scores equal, taking the final result to a decision by the judges who rightly awarded the bout to Terluiga.

The final between Goranova and Terluiga was unexpectedly one-sided with Goranova taking points off, and Terluiga having no answer. Goranova captured the gold with a 5-1 decision.

It was an exciting first day of Olympic karate with much action and many upsets. The next two days will hold as much excitement and drama. You can follow it all here at JAPAN Forward.

Paul Martin is a former British Museum curator, and a Hyogiin (Trustee) for The Society for the Promotion of Japanese Sword Culture (NBSK). He is also a recognized specialist by the Ministry of Land, Infrastructure, Transport and Tourism (MLIT).