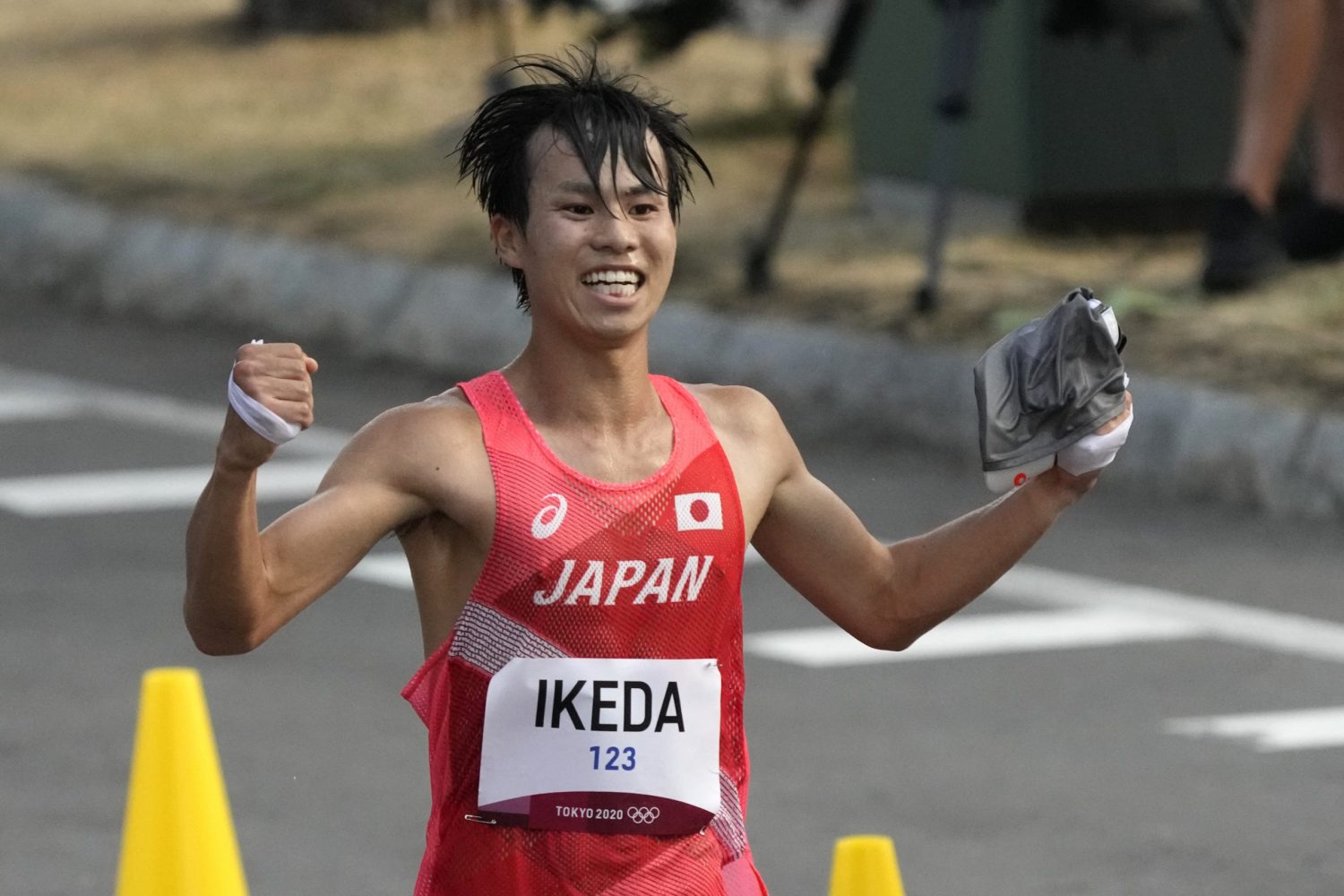 Koki Ikeda celebrates after finishing in second place in the men's 20-km race walk in Sapporo on August 5. (AP/Shuji Kajiyama)

Stano, a 29-year-old Rome resident, completed the race in 1 hour, 21 minutes, 5 seconds, beating Ikeda to the finish line by 9 seconds.

Yamanishi, the reigning world champion, secured the bronze medal in 1:21.28.

Ikeda made Olympic history for Japan by producing the nation’s 42nd medal at the Tokyo Games, which topped the national record for a single Games (41, set at the 2016 Rio de Janeiro Olympics).

Two years later, his much-improved time in the 20-km race produced an Olympic medal to savor for decades to come.

While Ikeda, 23, and Yamanishi, 25, came up short achieving their ultimate goal on home soil, they’ll have a story to share with family, friends and acquaintances for the rest of their lives.

Stano made sure of it by remaining at the finish line “to congratulate the Japanese duo with whom he’d spent much of the race at the head of the pack,” Olympics.com reported.

Yamanishi questioned his racing tactics after the event.

“I was too much like, should I pursue or shouldn’t I?” he admitted before telling reporters that “I failed to achieve my goal of winning the gold, so I guess that means there was something lacking in my training and everything I did leading up to today.”

Whereas Yamanishi reflected on the what-ifs after the race, Ikeda said his approach paid off.

“I’ve lost so many times to Yamanishi and really worked on keeping up with his spurts, and that really bore fruit on this big stage,” Ikeda was quoted as saying by Kyodo News.

After 60 minutes had elapsed, the 57-man race featured seven men at the front of the pack, including Ikeda, who was born in Hamamatsu, and Yamanishi, a Kyoto Prefecture native.

Track and Field at the New National Stadium

Thursday’s other athletics events were held at the New National Stadium in Tokyo.

American Ryan Crouser, the 2016 Olympic champion, defended his title in the men’s hammer throw with a top toss of 23.30 meters, an Olympic record.

Jamaica’s Hansle Parchment triumphed in the men’s 100-meter hurdles final, crossing the line in 13.04 seconds. He placed third at the 2012 London Games.

Parchment edged American Grant Holloway, the reigning world champion, who finished in 13.09, and Jamican Ronald Levy, who was clocked in 13.10.

After the race, Parchment exuded joy.

In a surprise finale uncertain until the very last seconds of the competition, Spain’s Alberto Gines Lopez raced to the gold medal with a total of 28 points, (the lower the score, the higher the rank). At the age of 18, he became the first-ever Olympic champion in the sport.

Gines Lopez took an early lead by acing the first of three categories in the competition, where athletes race up a climbing wall in record times between five and six seconds.

American Nathaniel Coleman, 24, took the silver medal overall with 30 points. He took the lead in the second round of the competition, bouldering, where athletes attempted to solve three climbing problems in under four minutes.

Austria’s Jakob Schubert scored a surprise bronze medal by ranking first in the final round, the lead. Climbers clip themselves up chord checkpoints as they climb on a 15-meter wall, in the closest reproduction of a mountain climb.

In the last minute of the competition the Austrian became the only athlete to complete over 45 holds on his way up the 15-meter climb, leaving the athlete to whoop ecstatically with joy.

Schubert grabbed third place with 35 points, narrowly overtaking Japan’s Tomoa Narasaki, at 36 points. He was considered the ace of Japan, the all-around world champion in Hachioji in 2019.

“I really felt the difficulty of a competition which only happens once every four and five years,” reflected Narasaki later to NHK.

Another athlete who missed out on the limelight was Czech Republic’s Adam Ondra, widely considered one of the best indoor and outdoor climbers in the world. Despite managing to almost finish the final lead climb, he concluded the competition sixth overall with 48 points.

Japan’s boxing medal streak continued with Ryomei Tanaka, who secured a bronze medal after his match against Philippines’ Carlo Paalam in the men’s flyweight semifinal.

Tanaka went into the rink at Kokugikan Arena with an unbroken streak, having prevailed over Venezuela’s Yoel Finol Rivas, China’s Jianguan Hu and Columbia’s Yuberjen Herney Martinez Rivas (5-0, 3-1 and 4-1).

However, Tanaka this time found his nemesis in the Philippines’ Carlo Paalam, who took the match with five judges finding in favor of him over three rounds, finishing the match at 5-0 at Kokugikan Arena.

Tanaka kept up the pressure by actively punching in the first round, but Paalam responded to the hits with ease. In the second round, the Gifu native changed to a more defensive strategy, but he was not able to change the course of the match.

Tanaka has become the first Japanese to gain a medal in the men’s flyweight division since Kiyoshi Tanabe, who also gained bronze in the Olympics in Rome in 1960.

“This is the best feeling ever, I have no regrets,” said Tanaka to NHK. “I think I have achieved everything I could today.”

Paalam will go on to challenge Great Britain’s Galal Yafai for the gold medal in the final. Should he achieve a win, Paalam could win the first-ever gold medal in the sport for his country, and become the Philippines’ second gold medalist in history, after Hidilyn Diaz gained the first historic gold in women’s weightlifting on July 26.

China’s Hongchan Quan and Yuxi Chen won the gold and silver medals in the women’s 10-meter platform event, extending the country’s title streak medals in this event to four Olympics.

Quan, 14, scored straight perfect 10s for three of her dives, sending her to the top of the rankings at Tokyo Aquatics Centre. The competition ended with a gap of 40.80 points between her and Chen, 15, who also won gold in the women’s synchronized 10-meter platform event.

The bronze medal went to Australia’s Melissa Wu. The 29-year-old competed in the 2008, 2012, and 2016 Olympics, but on all three occasions just missed the podium.

Japan’s Matsuri Arai placed 22nd in the preliminary round and missed the 18th-place cutoff for the semifinals.

Momotaro Matsushita finished in last place in the first semifinal heat in the men’s canoe sprint kayak single 200-meter race at Sea Forest Waterway in the morning. He was clocked in 37.096 seconds. Hungary’s Kolos Csizmadia won the eight-man race in 35.099 seconds.

Tyler Austin and Jack Lopez each drove in a pair of runs as the United States beat South Korea 7-2 to advance to the final of the baseball tournament.

The Americans will face Japan in the gold-medal game which will be held on Saturday, August 7 at Yokohama Stadium.

Leading 2-1, the U.S. broke the game open with a five-run sixth inning, capped by Austin’s single to center that scored two runs.

Austin, who plays for the Yokohama BayStars in Nippon Professional Baseball, has thrived at the tournament in his home ballpark.

Japan will be bidding for its first-ever gold medal in Olympic baseball.

South Korea won the gold the last time baseball was contested at the 2008 Beijing Olympics. The United States will be bidding for its first gold since Sydney in 2000.

The United States outscored Australia 32-10 in the third quarter to take a 74-55 advantage into the final stanza.

In the second semifinal, which was contested in the evening, France defeated Slovenia 90-89, with Nicolas Batum blocking Klemen Prepelic’s potential shot from close range in the final shot to secure the victory.

Nelly Korda of the United States persevered through more blistering heat to fire a 9-under-par 62 and take a four-stroke lead after the second round of the women’s golf tournament at the Tokyo Olympics.

LPGA regular Korda carded nine birdies and an eagle at the Kasumigaseki Country Club in Kawagoe, Saitama Prefecture, to finish at 13-under 129. Her only blemish was a double-bogey on the par-4 18th hole.

Overnight leader Madelene Sagstrom finished in sole possession of fifth place after a 68 gave her a two-day total of 8-under 134.

With rain and heavy winds forecast for the weekend, organizers have said the tournament may have to be completed on Friday, August 6, after three rounds.

Japan’s Mone Inami vaulted into contention with a solid 65 that left her six strokes off the lead. Inami had five birdies, an eagle and a double bogey.

The Americans led 3-1 at halftime. U.S. star Megan Rapinoe gave her team a quick lead by scoring in the eighth minute. Australia captain Sam Kerr tied the score in the 17th minute, with an assist from Caitlin Foord.

The United States regained the lead with two more goals in the first half, one again by Rapinoe in the 21st minute and another one minute into extra time by Carli Lloyd. Lloyd scored another goal in the 51st minute.

Foord and teammate Emily Gielnik scored two more goals for Australia, with Gielnik’s in the 90th minute, but the team wasn’t able to tie the game.

The United States women’s team medaled in all past Olympics except for the Rio Olympics, with four golds and a silver. This is the team’s first bronze. Australia’s women’s team placed seventh at the Rio Games.

Belgium Tops Australia in a Shootout to Nab Men’s Title

Belgium prevailed 3-2 over Australia in a shootout to win the men’s hockey final at Oi Hockey Stadium.

Australia’s Tom Joseph Wickham tied it up in the 47th minute.

After the fourth quarter failed to break the tie, the match proceeded into a shootout to determine the winner.

Belgium claimed silver in the event at the Rio Games.