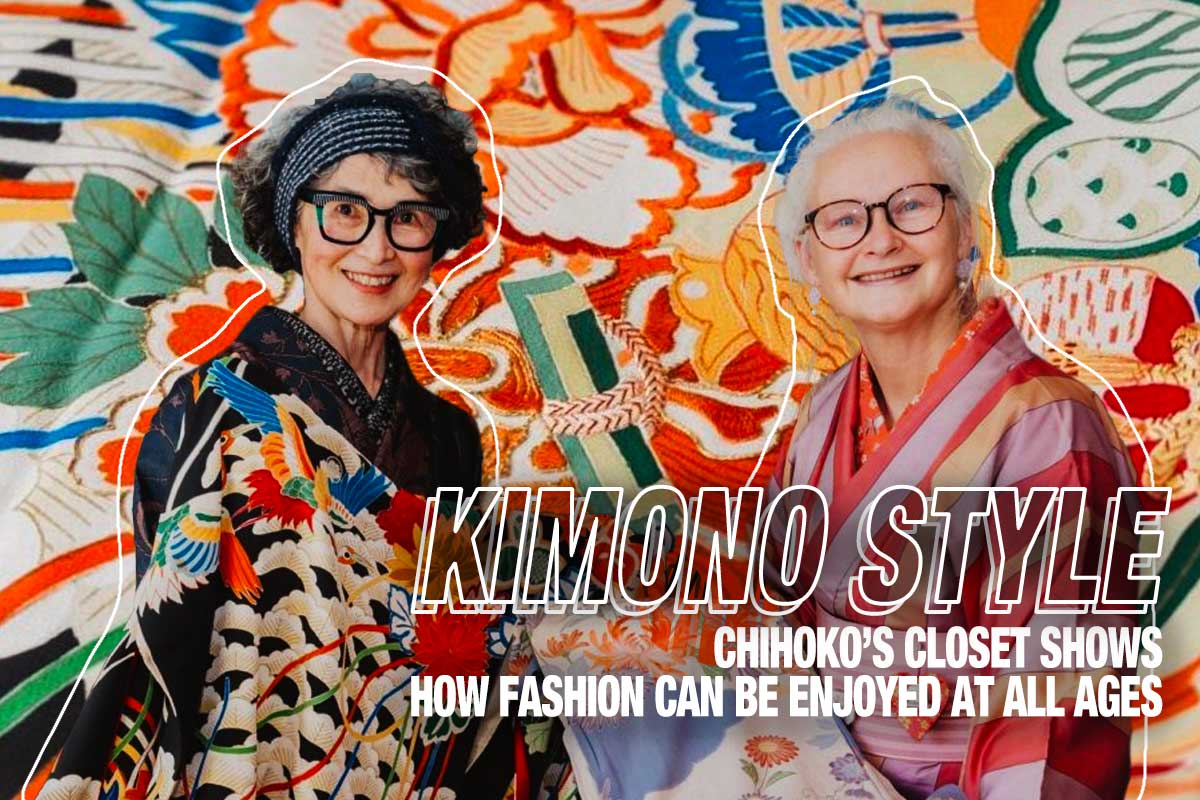 Chihoko (left) with the author.

Chihoko is in the over 65 age group in our research categories. She is an active member of the ‘Gray Hair’ group. This is a group of very interesting and active women who have decided not to follow the given line by hiding their gray hair with dye or any kind of toxic substance, but live with and enjoy the color that their hair has become.

The gray hair group periodically meets for dinner, and I have enjoyed pleasant evenings talking to some of the great women in the group. Chihoko was dressed in kimono the night of one recent gathering, and she was looking really cool. She had a lovely hat on.

Later she also came to my university when I was giving a speech, so I took the plunge and asked her if she would be a volunteer for my kimono closet research.

I spent a lovely morning in her house learning about her kimono journey. I was especially interested in the fact that even as an older woman, she can wear kimono in a fashionable and stylish way. She told me that she gets an overwhelmingly positive reaction to her kimono outfits, and now that she wears kimono, she has been able to wear her beloved hats more than she could before.

Many people tell me that I can wear kimono fashionably because I am a foreigner, but because they are older and Japanese, they cannot do it. Chihoko is proof that it is perfectly possible to be Japanese, and older, and still enjoy kimono style.

I hope that you enjoy her story. I think it is a great one, with a great message.

Chihoko was born and grew up in Tokyo and lives with her husband. Her two children are now grown up and independent. She is a housewife, and she used to sell dance wear from home for about 10 years, until her husband retired.

She wore a kimono when she was 7 for shichi-go-san (7,5,3 years old celebration) and she wore it again for coming of age (20 years old).

Her mother bought her several kimono when she married. They were plain, all-over patterned (komon), raw silk kimono, etc, but she was not interested in them and so she never wore them.

She has been interested in fashion, especially the 1960s, and she loves wearing hats and other accessories. She loves ballroom dancing.

Her mother passed away eight years ago, and they were planning to tear down her old house. There were some boxes with kimono in the house, so Chihoko rescued them, but didn’t really take a good look at what was in the boxes. It was later that she became interested and started wearing them. She has 52 kimono, mostly casual ones such as all-over patterns, and raw silk, and almost all of them come from her mother.

Almost three years ago, she was influenced by a photo book that I published. She had never been inspired by conventional kimono magazines, but after seeing this book, she got out her mother’s kimono and began to look at them. She went to a few kimono lessons, practiced with YouTube for almost a year, and then started going out in kimono.

Influenced by that book, she has started to wear a lot of hats and accessories that she wasn’t using before, and she finds that it is fun. When she goes out in kimono people praise her look, and that makes her very happy.

She says she has too many kimono and they take up room, so she would like to get rid of some of them. However, she doesn’t really know what they are, so she wants to check that first before she decides which ones to keep and which ones not to keep. More importantly, she wants to wear each one at least once before she gets rid of them.

She showed me her mother’s wedding furisode. In the old photograph you can see it in black and white. It appeared from the very bottom of the kimono chest. She thought it was a really fantastic furisode, so bright and colourful, so she wanted to take her photograph in it. She got a photographer and I went out in Tokyo and she took shots and made a photobook of them.

She also showed me the first kimono that she bought herself. She was in her 40s, she thinks. The technique is called sumi nagashi. She was in a department store with her mother, in Kichijoji. She just thought it would really suit her. Then one day she wore it to a party and she had soup spilled all over it!

Chihoko continues to rock fashionable kimono style whenever I see her.