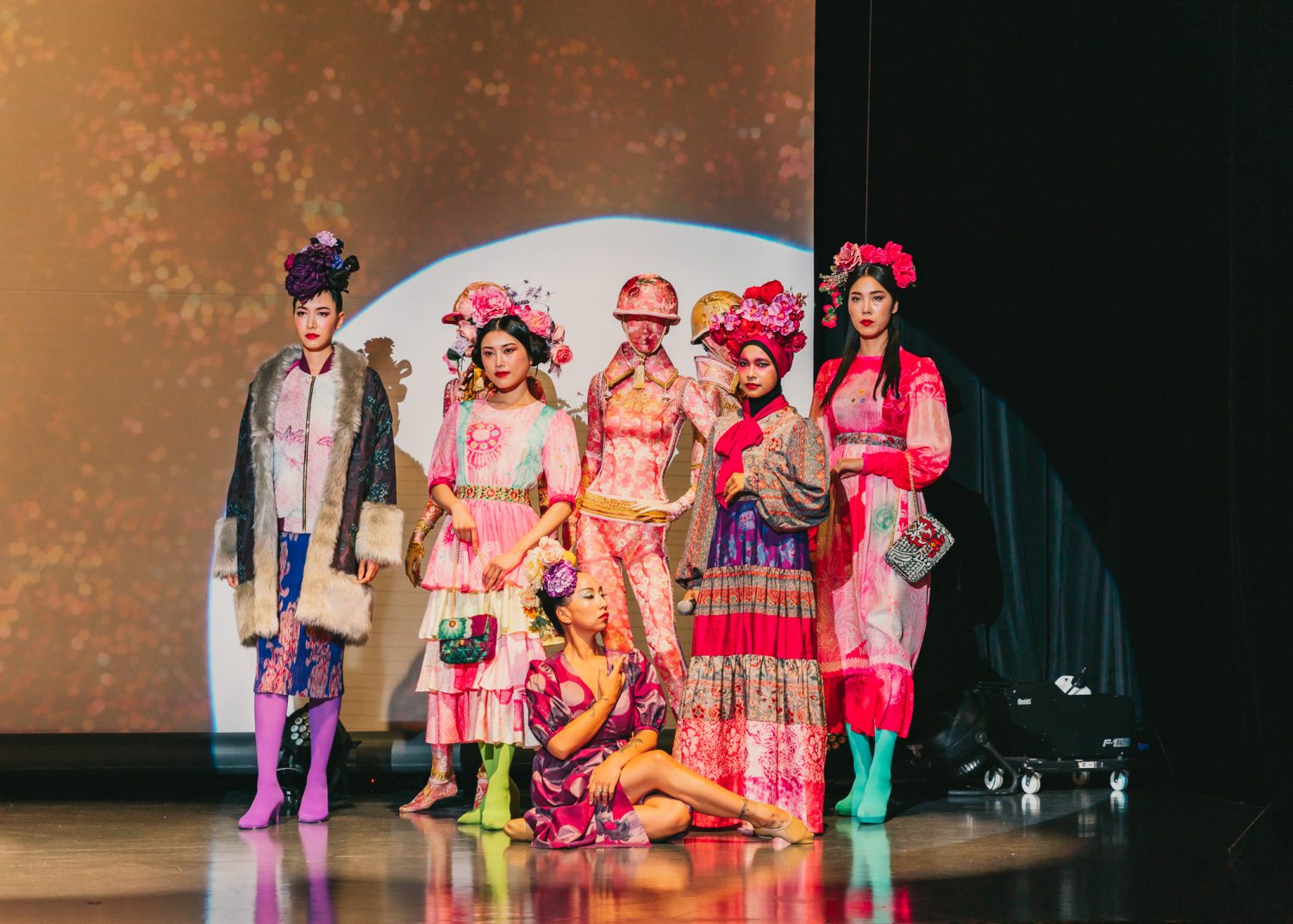 On November 26, 2021, an original and innovative fashion event called FashiComm took place in Shibuya Stream Hall. I was fortunate enough to be invited as a guest, along with Mrs. Nuning Akhmadi, the wife of the Indonesian Ambassador in Japan.

FashiComm is a fashion show with a difference. It showcases both virtual and physical fashion. A young woman who loves fashion but also has a big concern about ecology and the environment, Chinatsu Nanami, is the brainchild behind the event.

The COVID-19 pandemic means that people could not easily get together in person to work on projects. However, due to the increase of digital communication technologies, young people from around the world are able to meet online to work together.

For this event, Chinatsu set up two teams of designers and customers ー one in Japan, and the other in Indonesia (called @worldscuad ) ー to work on fashion projects. One was led by Kimono Creator Kisaburo. Kisaburo is the fourth generation of a family of kimono tailors, but has started his own modern and experimental kimono brand. The other design team was led by Miyuki Ishizaka, who has a brand of upcycled clothing made from kimono fabric. Ishizaki worked with the team in Indonesia and Kisaburo with the team in Japan.

The two design teams worked with young fashion designers from Indonesia and Japan through regular online zoom meetings with the goal of creating lines of clothing that embodied both cultures.

The creative efforts were not top down. Instead, each team had dialogues with their local communities and created designs that suited the desires of local people. The idea was that they would draw on the heritage and background of each culture, making clothes that had stories and were rooted in place.

Ultimately, the goal was clothing that could be made in the locations to which they were attached. The teams also thought about ways of creating clothing without wasting cloth.

There were real clothes on real models, and in addition there were clothes created virtually. The idea was that a customer could use the virtual platform to customize the clothing, lengthening, shortening, widening, changing fabrics, and all without wasting any cloth. When the final shape and colors were decided, only then would the real item go into production.

This style of manufacturing aims to reduce waste. But it also engages the customer. It is hoped that by allowing customers some autonomy in the production process, they will treasure the items produced for a long time.

A promotional video shows young people in the city wearing T-Shirts with the slogan “Fast Won’t Last”. It means not only the items, but the unsustainable fashion industry. A display of tate (performance style) swordsmanship and short online interviews with creators added interesting additional content to the show.

In a world where fashion is increasingly plain and dull, almost like a uniform, I was excited to see how much color, pattern and energy there was in the clothing designs. Kimono and Indonesian textiles are full of color and meaningful patterns. Drawing on the heritage of the two countries, the clothing had a dynamism that is missing from many of our wardrobes.

As I love kimono, including the shape, I am not always a fan of kimono that are upcycled into western dress. However, Muskaan clothing on display had straight lines, wrapped garments and repeated patterns that worked well on the new format.

Ishizaki wore a suit that was outstandingly smart and distinguished, made from an old Oshima kimono. Her team produced colorful girly clothing in pinks and greens, with lots of layers and tiers, and utilized batiks and sarasa.

Kisaburo’s kimono were gender neutral and presented on models with big boots and heels. They were mainly in tie-dye with loosely tied fabric obi, which were low on the hips. Colorful narrow hakama were worn, and also a large jacket made of strips of old kimono which resembled the patched kesa that monks in Japan used to wear. The influence of manga and anime culture was strong, and it was clear that these clothes were aimed at the young generation.

Fashion in the Virtual World

The virtual clothes were equally interesting. The teams were challenged to embody both a sexy fashionability and also keep within religious restrictions on showing the body, which is a concern for Indonesian designers. A black and white jacket and trousers with red accents referenced some traditional Japanese patterns. Other garments were based around designs of a rooster, a fortuitous motive for Indonesians.

The garments also included a sarasa top and a skirt and cloak constructed from Indonesian embroidery. Through the virtual video it was possible to see the clothes from all angles, and even how they would move.

After the performance, the designers, Mrs. Akhmadi and I had time to review the works created. Then we had a short panel discussion focusing on the problems of the industry and how we can be active in finding solutions.

It was exciting to be a part of an initiative that recognizes the importance and joy of fashion and clothing and also wants to do something about the problems that have arisen from our industrial production and the fast fashion system.

Ultimately this event was realized through funding from the Japan Foundation, along with the contributions of people from Russia, Canada and other locations around the world. Find out more and pay to watch the show at this worldscuad link.

Sheila Cliffe was born in Plymouth, England in 1961 and relocated to Japan in 1985. She gradutated from Suzunoya Kimono Gakuin and received a special award for her work in spreading kimono culture from Minzoku Ishou Bunka Fukyuu Kyoukai. She wears kimono regularly, and has taken a PhD in the study of kimono trends. She teaches kimono culture and dressing, and studied dyeing under Sassa Reiko. She has spoken in Japan and in many other countries on kimono culture, and have published a book and articles in many journals. She has worked tirelessly in events in Japan and abroad to increase cultural understanding of Japan through spreading knowledge of kimono culture around the world.