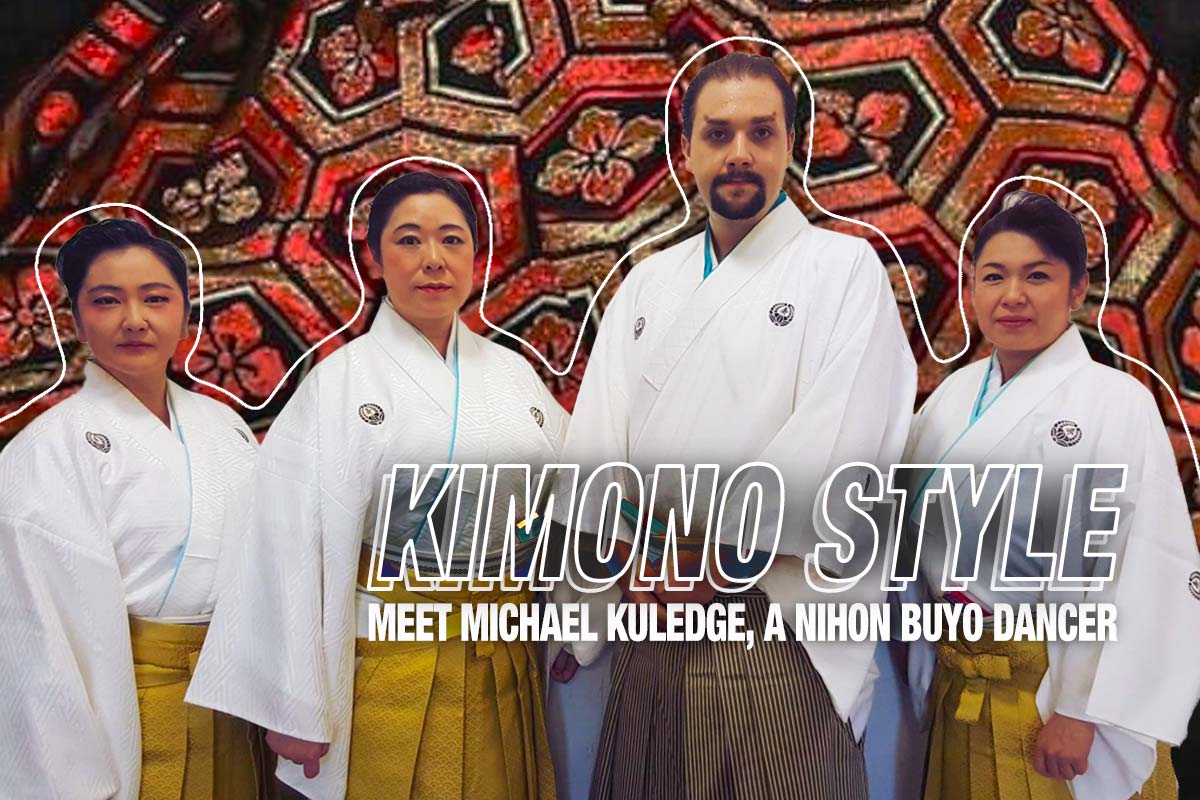 Michael Kuledge is 28 years old and he grew up on a farm in Maple Lake, Minnesota, far from Japan. He has been in Japan since 2018, where he teaches English to preschool children. He has some unusual hobbies.

He can often be seen wearing kimono around his town, and regularly attends lessons in Nihon Buyo. Wanting to find out more about his passions, author and kimono expert Sheila Cliffe interviewed him about his unusual interests.


Michael, why did you want to come to Japan?

I have been interested in Japanese culture and sci-fi anime since I was a kid. My interest increased when I was at college. After college I decided to apply for the JET program, which I didn’t get, but that motivated me to try even harder, and I got another job teaching English in Japan.


Were you already wearing kimono at that time?

I became interested in kimono when I was about 12, but having a real kimono seemed like having a Lamborghini, just something you dreamed about.

Then I bought my first yukata when I was at an anime convention in my college days, and I have been going down that rabbit hole ever since. But it wasn’t something I wore regularly in the U.S.

I just wore it for dance, sometimes tea ceremony and maybe the occasional event, but I didn’t have the nerve to just wear it. I still had that mindset when I arrived in Japan, and it wasn’t until I had been invited to an event and I wore it on the train that I began to feel more comfortable wearing it in public.

At first I just wore it once a week, going to dance practice, but since I moved from Ibaraki to Tokyo to be nearer my dance lessons, I wear it for errands, on the weekends, and I can even wear it to go to work, because I have to change when I get there, anyway. At home I wear a comfy kimono or yukata.

What was your first exposure to Japanese culture?

It was through anime. I also started to watch old samurai films with subtitles when I was a kid.

I fell in love with what everyone was wearing, all the shapes, but I was especially interested in the geta. That made me start researching into kimono.


Why did you start to practice Japanese dance?

It started in the U.S. and it was a reason to wear kimono. I joined a local volunteer dance group in Minnesota, and with some prodding from the leader I started to study Nihon Buyo and Bon odori.

Unfortunately, I was only with that group for about a year and a half. Then I had a year’s gap, and then I moved to Japan.


How did you meet your present teacher?

It was half luck and half facebook. I encountered Suzunami Eiko, the Iemoto of the Suzunami Kai, (Ryu) school when my group went to Hawaii for a dance workshop, and she had come from Japan.

I didn’t have the chance to talk to her then. Later we became facebook friends and we started having a chat about something which led to us corresponding. I wrote that I was missing doing dance, and she invited me to a lesson she was teaching in Tsukuba.

I was incredibly excited to think that I could dance again, and I started going to dance lessons about once a month. She started to bring one of her main apprentices, Suzunami Eiko sensei, to the classes. And this woman became my main teacher. I started going to her house for lessons.

It is nothing like learning in the volunteer group in Minnesota. It is so much harder. I have to learn proper posture, walking style, very small hand movements and correct timing. It involves a lot of long and sometimes painful practice.

Japanese dance teachers sometimes get very physical. They will grab you and move you into the correct position. But I am also impressed by how much the school is like a family. They do not use the word seito, or student, but instead use monkasei, which means someone who has come through the same gate.

The school is almost like a second family, and I cannot tell you how helpful that has been to me, living in Japan. They have not only helped me with dance, but with Japanese and also with proper manners.

What have been the biggest challenges you have faced so far?

I have ADHD, and so learning the Japanese language has been very difficult. I need to put more effort into it, but dance and work take up most of my time.

The cultural differences can also be challenging. Especially in the traditional dance world, showing proper respect is very important.

I think I have now adapted to living without a car, though.

What do you feel has been your biggest accomplishment in Japan so far?

I can think of two, both dance performances. One was my first solo performance, which was at a memorial event for Iemoto’s father. I was really nervous, but it was an amazing experience.

The second one was going back to the same workshop in Hawaii, but this time with Eiko Sensei and her apprentices. It was really satisfying for me to perform there again. This event coincided with my getting my present job in Tokyo, so I really felt that my new life was coming together.

You have interesting hobbies. What are some of your other favorite pastimes?

I am a nerd who enjoys anime and building with lego, to relax. I also collect temple and shrine stamps and want to get the famous ones in Tokyo.

Do you have a goal that you are working for now?

I want to continue to work at my dance until I can achieve Natori, getting a stage name. It will be a long and hard journey but I don’t want to give up. I have even bought a daruma for it. When I finally get a name, I will fill in the daruma’s eye.