Inside the Mass Vaccination Center in Tokyo 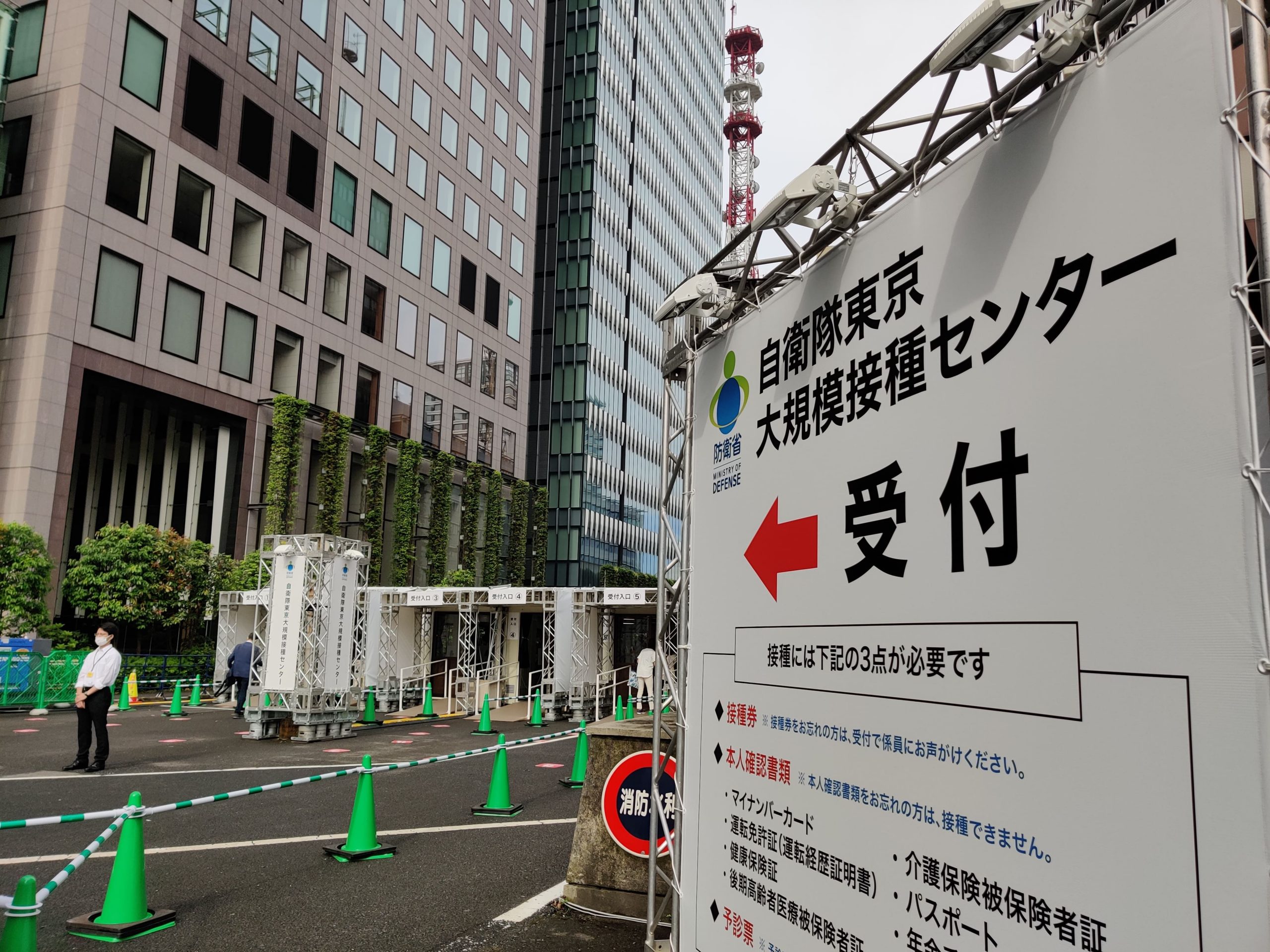 The sensation was much like that of being directed to a massive much-anticipated concert.

Walking out of the gate at Otemachi metro station in Tokyo, I spotted a volunteer at every corner pointing confused-looking vaccination candidates in the right direction. In the couple of hundred meters between exit C2b and the entrance to the vaccination center, I counted at least 10 staff members whose sole purpose was to direct me toward the venue.

After we came up the stairs and turned the corner to the left, there was a large tent complex — the entrance to the mass vaccination center in Tokyo, organized by the Japan Self-Defense Forces (JSDF).

On May 28, JAPAN Forward visited the massive vaccination center near the Imperial Palace in the heart of Tokyo to find out how it was working. My mother, Nobuko Hashimoto, had easily booked an appointment to get vaccinated there.

Arriving at the Vaccination Center

The Ministry of Defense has teamed up with private sector doctors for a vaccination setup that is divided into six stages. According to an article published on Nihon Keizai Shimbun on May 31, there are at least 80 doctors and 200 nurses from the JSDF, and 200 nurses from the private sector, serving as medical staff in the centers in Tokyo and Osaka.

The mammoth effort starts right at the exit of the train station you use to get to the vaccine center. Multiple stations in the Otemachi area have staff to point people in the right direction.

For those arriving at Tokyo Station, which is only a couple of minutes away on foot, there is even a free bus, which runs every six minutes from 7 A.M. to 9 P.M. to take the vaccine candidates from the station to the front of the vaccination center and back.

The six-step process is clearly delineated in a glossy brochure presented upon arrival at the vaccine center. Those getting vaccinated first enter a large tent. There, the first thing is a body temperature check to make sure no one is sick with COVID-19. That is because, if a patient has contracted the virus, it’s advisable that they seek treatment first and wait until they have recovered before receiving the jab.

Next, vaccine candidates enter a building, where they are divided into four color-coded groups. Met by smiling, friendly staff and volunteers, they quickly receive a colored file, and are then directed to seating matched to the file color, with next stops in the process also following the assigned color coding.

Here, as in the initial stage of the process, patients are asked multiple times about their vaccine voucher, their identification, their medical condition, and any history of allergies. At least once, just before vaccination, JSDF doctors interview each individual patient about their health history, and, after the jab, doctors monitor patients for allergic reactions.

Patients are monitored for 15 minutes after they are vaccinated in order to ensure quick medical response in the event there is an adverse reaction. It is also during that time that the booking for the second shot is made.

When the 15 minutes of monitoring is up, the now-vaccinated patients ride the elevator back down to ground level and are free to go.

“In general, the impression is there is plenty of staff to clearly direct you in the right direction, and one doesn’t have to go very far without sitting down,” said my colleague Susan Komori, who accompanied her husband to get the jab on May 28.

The whole process was over and done in less than 30 minutes. When Hashimoto later needed to adjust her second vaccine booking, it was also taken care of efficiently within 30 minutes after first calling the hotline.

Hashimoto’s reaction? “Everything went really smoothly, and I am relieved that I got vaccinated. Once I get my second shot, I can go back to Italy [where my husband is now] with peace of mind.”

According to the numbers released by the Ministry of Defense, in the first week of June, approximately 71,641 shots were administered in the Tokyo center, and 34,867 in the venue in Osaka.

As capacity expanded, Tokyo started taking appointments for people residing in neighboring prefectures of Kanagawa, Saitama, and Chiba from May 31. This was done ahead of schedule, and bookings for the following week were filled in less than 50 minutes.

Also starting from May 31, the Osaka vaccination center expanded its capacity to accept patients living in neighboring Hyogo and Kyoto prefectures for vaccinations starting on June 7.

The vaccination centers are set to be operational for three months, with priority given to vaccinating the over-65s and those with pre-existing conditions.

The Minister of Defense Nobuo Kishi said in a press conference on June 1 that there was the possibility that vaccinations would be extended to workers who cared for the elderly, but “first we want to concentrate on vaccinating all those over-65.”

The topic of expanding the age groups eligible for vaccination is especially key. The Ministry of Defense reported that, as of June 7, the bookings for the week of June 14-27 at the Tokyo vaccine center were less than 10% full, with only 13,210 slots filled out of the 140,000 capacity.

How the Vaccinations Started

The Japanese Self-Defense Force, together with the Ministry of Defense and the Ministry of Health, opened the two mass vaccination centers in Japan on May 24: Tokyo and Osaka.

They are intended to aid the government effort to achieve one million vaccinations a day, and finish vaccinations for over-65s by the end of July, as expressed multiple times by Prime Minister Yoshihide Suga.

The vaccine used by the JSDF sites is the Moderna vaccine, which was approved for use in Japan on May 21.

Bookings for vaccinations at the centers started on May 17, and have proceeded largely without issue. The bookings themselves have also been remarkably straightforward. The only information needed are two numbers: the residence code, and the vaccination code, both of which are written on the vaccine voucher sent to most people over-65 around the country. Some localities are also in the process of sending vouchers to those under the age of 65.

The only major problem reported so far arose on the afternoon of May 27. A website malfunction prevented bookings from being processed, and caused delays of over an hour as medical workers had to take bookings by writing them down by hand.

Both centers started gearing up their procedures by vaccinating at half capacity the first week, with Tokyo and Osaka aiming for a maximum of 5,000 and 2,500 people a day, respectively. Both are now serving at full capacity, 10,000 and 5000 people per day, respectively.