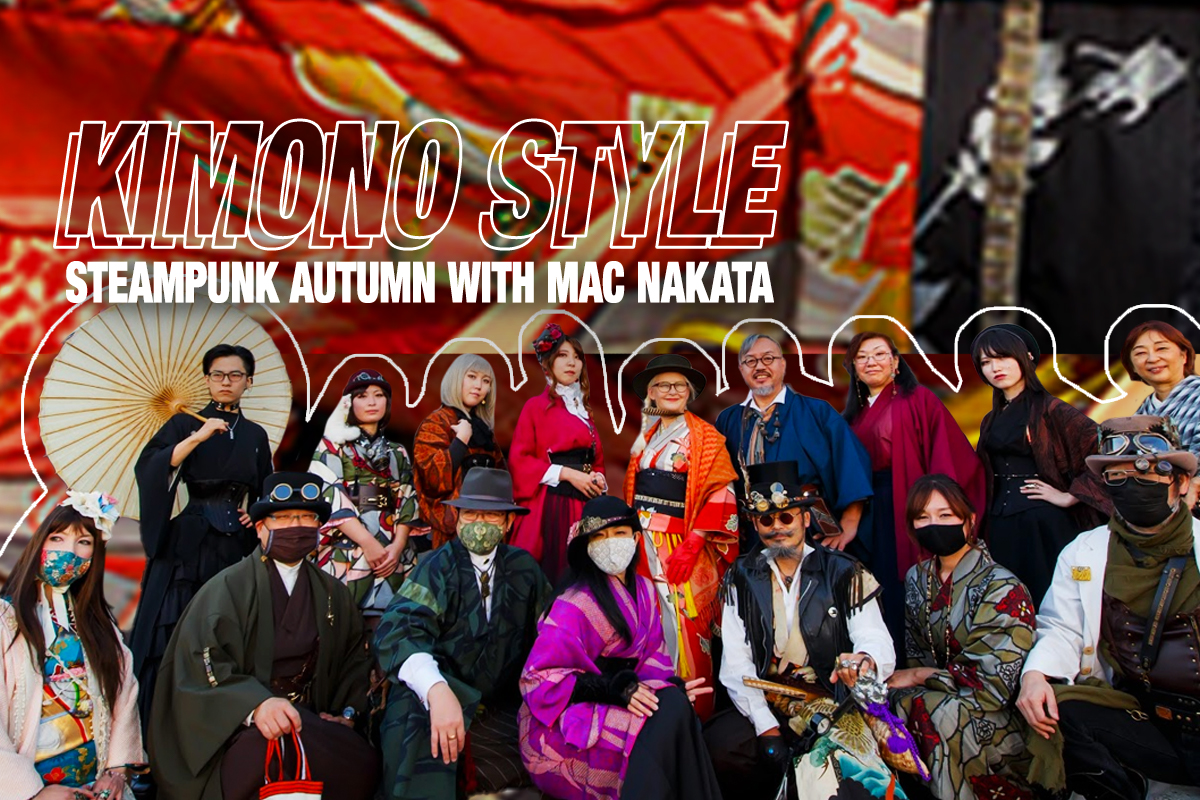 I went to visit Maebashi the other day, to learn a little about the place, enjoy the autumn leaves and sunshine and to meet a very special person. He is someone who I have admired for a while, and who I met at a kimono summit in Saitama last year. It is safe to say that he is one of the most dandy kimono wearers around. 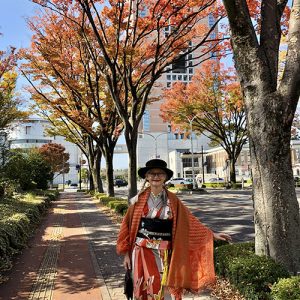 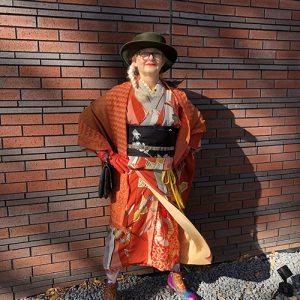 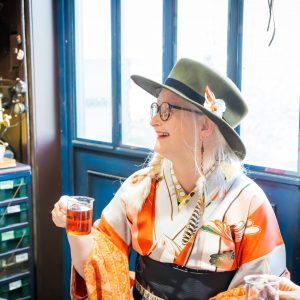 He is also an artist and a free spirit, (he says jiyuugata 自由方).

When he was younger Mac Nakata worked really hard. He had several businesses, but he had decided that he wanted to retire at 50 and travel. He bought a car that he could sleep in, and since then he has done 40,000 kilometers going around Japan. He picks a theme and then just leaves for a month or two. 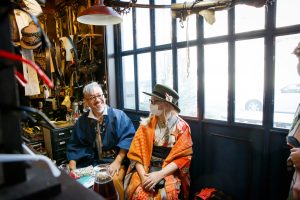 He decided to wear a kimono to show who he was. When he wears it, sometimes non-Japanese ask to take his photograph. I am sure everyone would agree that it suits him very well.

Mac, however, is a lot more than just a fashionable kimono dresser. He is an artist inventor. Inspired by the industrial revolution and its steam machines, and the magic of Harry Potter like fantasy worlds, he constructs incredible machines. 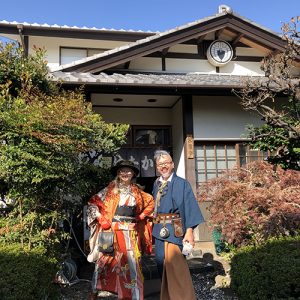 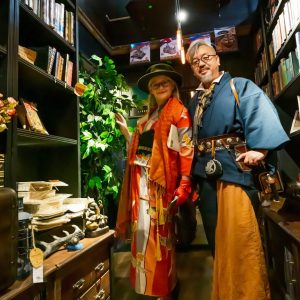 Within those machines one finds bits of leather, straps, buckles, wires, studs, tubes, bicycle chains, watches and clocks and musical instruments. The function is often not immediately apparent, but they are items that are, in the normal world, relatively mundane. A handbag, a toilet roll holder or a name card holder are as unlike any other handbag, toilet roll holder or name card holder that you could imagine.

His more fantastic objects are swords and steam powered broomsticks. If you ask him why it is constructed like that, he says that he thinks it’s interesting, (omoshiroi). He values originality above anything else, and so he doesn’t look at things other people make or imitate how they make them.

He started making art objects and posting them online over ten years ago. He started to get a lot of likes from Germany, and then found himself featured in a German Steampunk Magazine. He didn’t know what steampunk was, and he had to look it up and find out.

He entered two of his pieces into an exhibition at MoMA NY, in 2013 and they were acceptedーand awarded prizes. They were “Paper Rescue” and “Unmechanical Machine”.

After that he was invited to show a piece in the “Discover the One Japanese Art” 2017 exhibition in London. It was judged by Mick Davies VPRBA, the president of the Royal Society of British Artists. His piece was shown at the Menier Gallery, London. He has also shown work in Ginza, and Japanese television is now taking an interest in him. He is excited that some of his TikTok videos have over 5 million views.

Mac told me that his friends were really excited about my coming to visit, and they were waiting for me at Alice Blanche. Alice Blanche is the most interesting and magical shop I have ever seen. Depending on which tunnel you will enter, you will be transported somewhere. It could be a world of accessories, of Alice in Wonderland goods, or it could be the witch room, the historic book room or the Victorian style clothing room. Alice Blanche is a journey down a rabbit hole and into other worlds. 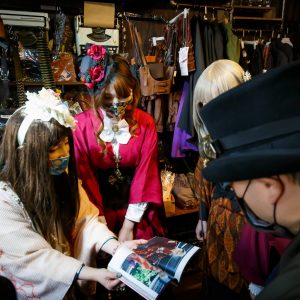 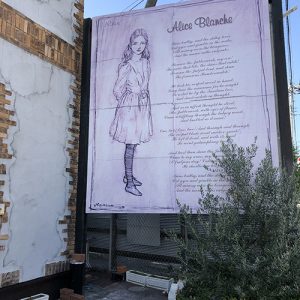 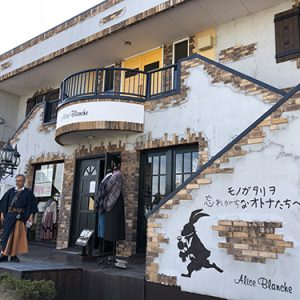 Here I was introduced to Mac’s wasou steampunk friends. They gather at Alice Blanche almost every day. Another gentleman who cuts a stylish figure is Shyutaro Hasaygawa Joseph, who looks as if he came out of a Japanese version of Pirates of the Caribbean. Over his buckle boots and gaucho pants he has a black women’s kimono belted on, and a piece of armour hanging on the other side. He wears a white shirt, waistcoat and carries a cane, and has a top hat with a long feather, dark sunglasses and generous whiskers to finish off the look. He has a particular interest in time pieces. 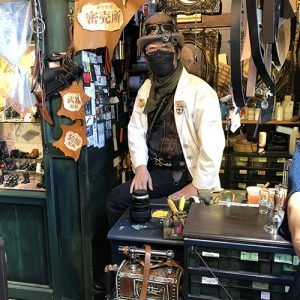 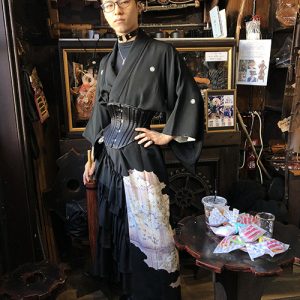 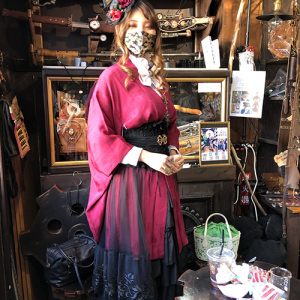 Mac’s friends were all wearing a kimono or haori, but not in the conventional way. They were tucked up short and worn with boots or crazily high heels and fishnet stockings. They were worn under black lace skirts and with corsets and haori. They were worn in layers and belted on.

Accessories were also an important part of the outfits. Headdresses, lace and colored contact lenses were essential parts of some people’s dress. These are people who love to explore the possibilities of dress. They are able to freely mix western and Japanese together without thinking about rules or boundaries. They are just enjoying their fashion. 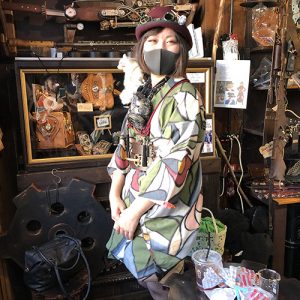 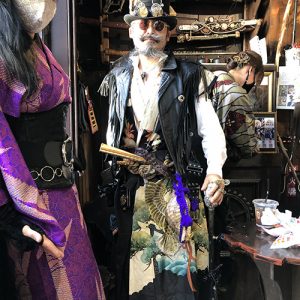 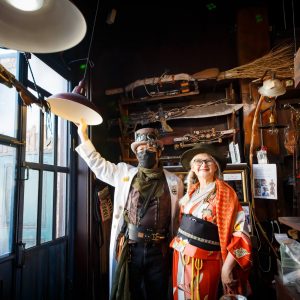 While I may not wear kimono that way myself, I thoroughly enjoyed the way everyone expressed themselves through their clothing. I didn’t know that I was an inspiration to a group of wasou steampunk fans in Gunma, who put off a day visit to Tokyo to meet me at Alice Blanche. I am looking forward to meeting Mac and the wasou steampunk gang again, sometime in the future. 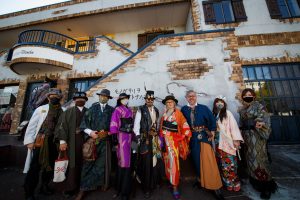 Alice Blanche, the shop, can be accessed on the web here, or on instagram here.